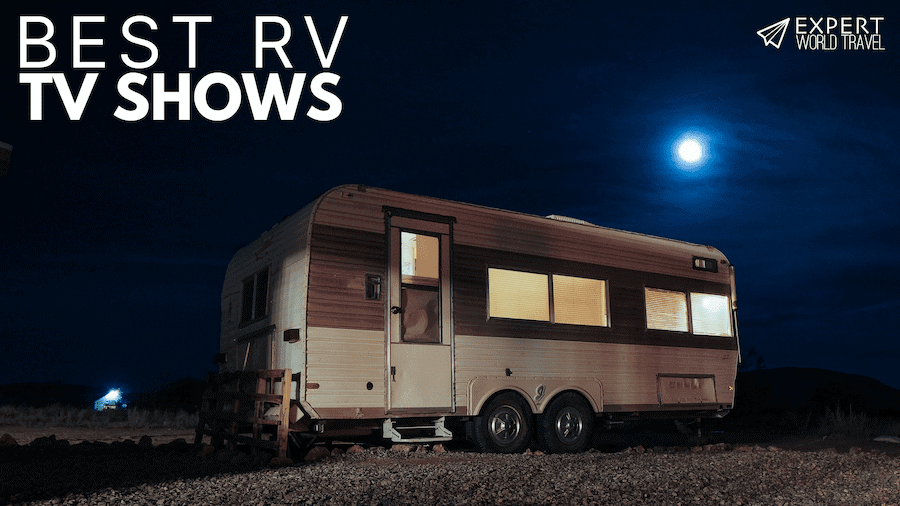 Can’t get enough RV TV shows? You’re definitely in the right place then – this guide to the best RV TV shows covers all the great series out there, including the ones you don’t know about!

This detailed guide to the best RV TV shows covers all the most popular series, as well as a few hidden gems. Whether you’re looking for inspiration for road trips, vehicle reviews, or you just want to binge-watch everything that features an RV, these TV shows are just perfect for you! 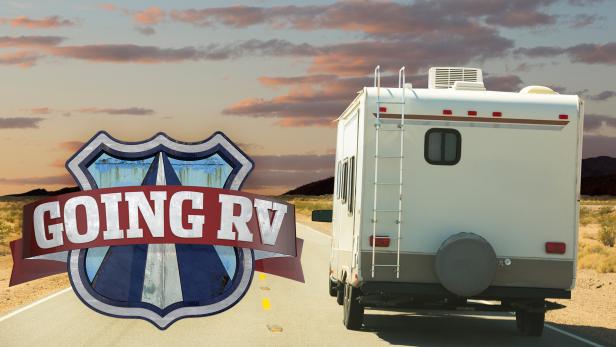 Going RV follows couples and families who are looking to purchase an RV. Sometimes it’s people who are just getting into van life and other times its experienced campers who know exactly what they want because they’re replacing an old vehicle.

The episodes follow couples on their search for that perfect vehicle, usually with the same format. The couples are offered several vehicles that are all a good fit for their needs, and they ultimately must decide on one. It’s an interesting show to watch and you might even learn a thing or two about shopping for RVs. 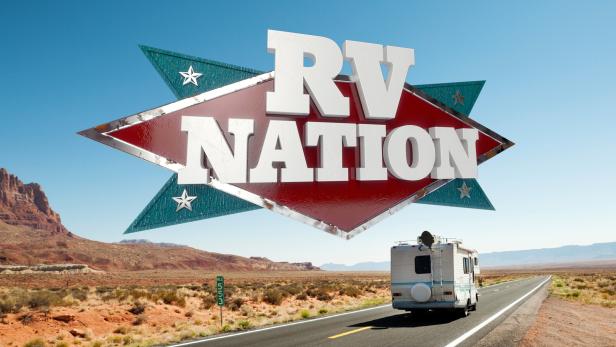 RV Nation is a great TV show that focuses on the designs and construction of some of the largest and most elaborate RVs on the market. Sometimes it’s about converting a van into a luxurious RV for a celebrity, other times it’s about just the craziest and most unique RVs that were ever made.

The show also explores the RVs of some celebrities, but it’s not the main focus of RV Nation. Celebrities come into focus only when there’s something unique and new about their home on wheels – if it’s interesting and one-of-a-kind, it’s on RV Nation! 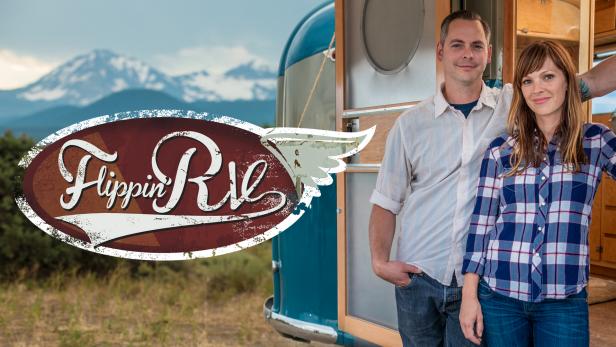 Flippin’ RVs is an awesome show if you’re into the restoration of old vehicles. It’s like a cross between Pimp My Ride and Flip or Flop. The show is hosted by spouses Anna and Justin Scribner, who have made it their life’s mission to find and restore as many vintage RVs as possible.

The show follows the pair as they travel across the country in search of unique vintage RVs. When they find something worthwhile, they bring it back to their shop in Oregon and transform it into a luxury home on wheels. Most of the time when they’re done with it, the RV looks better than it ever did!

Beachin’ RVs is another show that follows spouses Anna and Justin Scribner. Again, they roam around the States searching for old and abandoned RVs they can breathe new life into. They then bring it back to their shop and transform it into something absolutely amazing that looks better than it did when it was brand new.

If you watched all episodes of Flippin’ RVs and you’re craving more, this is the next best thing. But there are only two episodes, don’t get too excited. The twist with this TV show is that the RV restoration is done for families who want to take these vehicles out on the beach, so there’s a slightly different design focus. 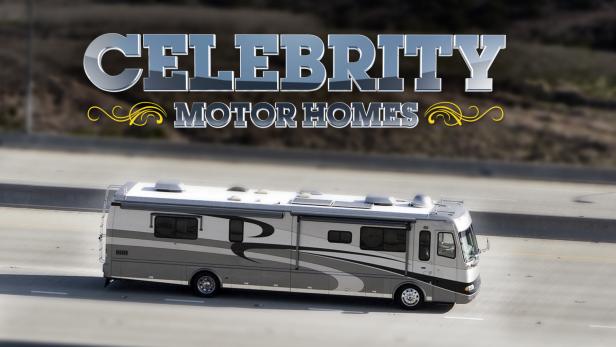 If you like looking at multi-million dollar RVs and their interiors, you will really like this show.

Celebrity Motorhomes is another insight into how the 1% lives, but this time focusing on their lavish RVs. With a major focus on movie trailers and tour buses, this TV show covers some of the most expensive and wildly lavish RVs that exist on this planet.

Timbaland has a recording studio in his RV, Simon Cowell has a massive tub facing a TV, and Craig Morgan’s RV can sleep up to 12 people! And that’s just the beginning – Mariah Carey has a second-floor dance club in her tour bus, Kellie Pickler has a walk-in closet in her RV, and Will Smith’s trailer has a 100” TV in the production office. If you’re intrigued to see what other ridiculous things are common in celebrity RVs, definitely tune into this show! 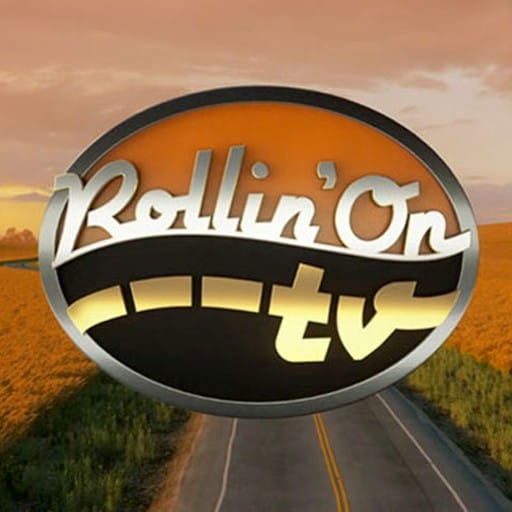 Rollin’ On TV is an RV lifestyle show that covers all aspects of RV life. Whether you want ideas for road trip destinations, reviews of new motorhomes, or some RV recipes, this TV show has got you covered!

On top of that, the show’s YouTube channel is a great source of information for RV owners. It features quite a lot of segments from the TV episodes, but also educational videos on everything from how to replace the RV slide-out rubber seals to what you need to know about buying used RVs.

Rock My RV with Bret Michaels 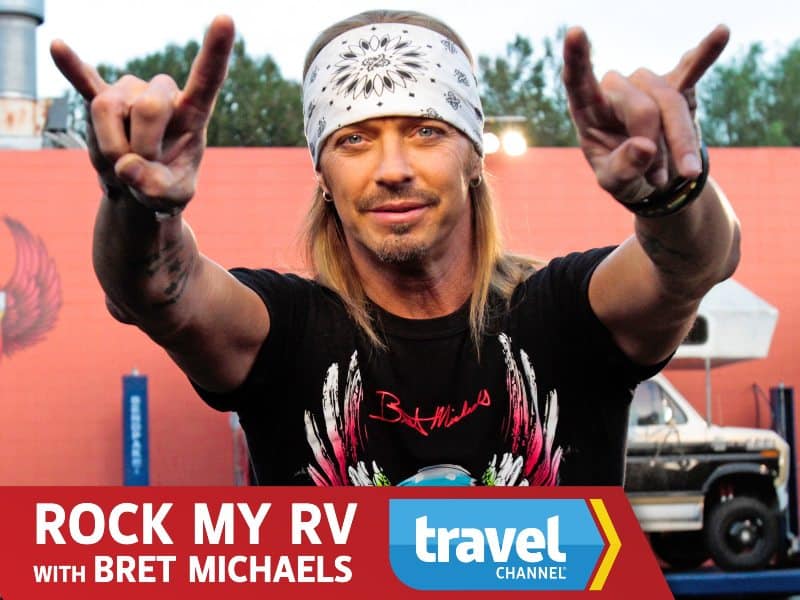 Legendary rock star Bret Michaels hosts this RV transformation show. The rock icon has a handpicked team of experts who work together to transform plain RVs into the most incredible homes on wheels. If you enjoy shows like Pimp My Ride, you will absolutely love Rock My RV!

But where does the rockstar fit in? Bret Michaels has a lot of love for RVs! Not only did he spent 25 years traveling on a tour bus for nine months out of a year, but he also designed that bus himself, top to bottom. Michaels also spent a lot of his childhood going on road trips with his family, and thus understands what the RV means for some people. 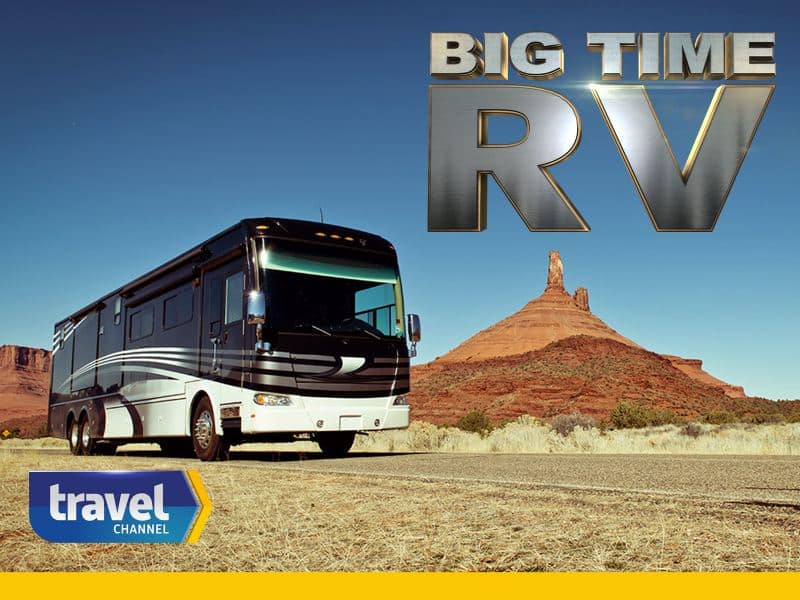 Big Time RV gives viewers a look inside the largest RV dealership in America. They tour and test every new model, which helps viewers learn more about the different makes and models of RV, as well as their strongest and weakest points.

The show features an expert sales team who works to satisfy the demands of every RV-loving customer, whether they’re looking to rent, buy, or replace. What makes this show so great is that you get a glimpse of everything, from budget pop-up trailers to some incredibly luxurious Class A motorhomes! 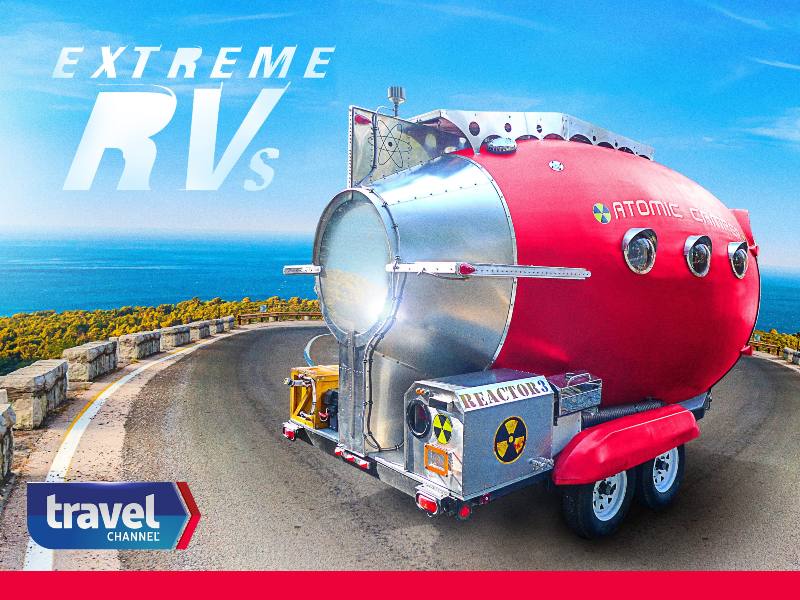 Extreme RVs is a TV show that features only the most extreme homes on wheels. If it’s custom, weird, extravagant, and one of a kind, it’s probably featured on this TV show. If you want to see some truly extraordinary RVs, you will enjoy watching the show.

The episodes feature both existing RVs that you might have already seen – Simon Cowell’s vehicle is in the first episodes – as well as popular RV builders who are in the process of designing and building a brand new vehicle. 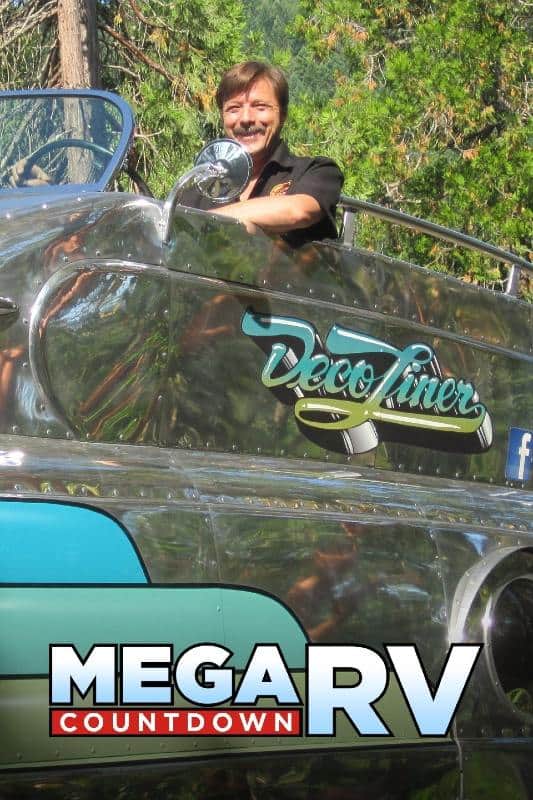 Mega RV Countdown is another show that features only non-conventional RVs. But this show really kicks it into fifth gear with their finds. A fire truck turned into an RV, a $2 million winery on wheels, and an RV with an oxygen therapy system in it are just some of the amazing finds featured on this TV show.

If you want to see some RVs that are out of this world, definitely catch an episode of Mega RV Countdown! 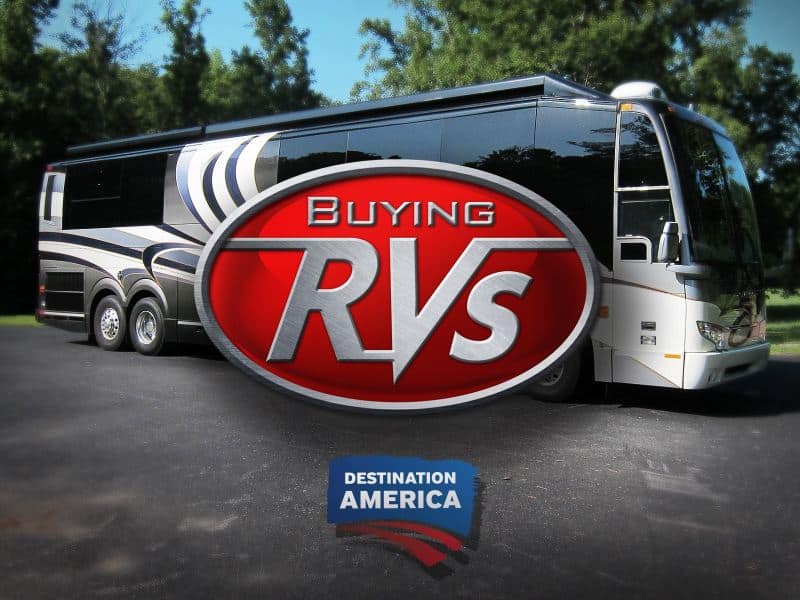 Buying RVs is a TV show that chronicles the process of purchasing a recreational vehicle from the buyer’s perspective. It’s a great show to watch if you want to see some really cool RVs, including those with some really special features.

Each episode follows a different couple as they search for that perfect home on wheels. The couples are then offered three different RVs, each with a unique feature that they won’t get on any other motorhome. The couple then must choose which RV they love the most and hope that it’s within their budget! 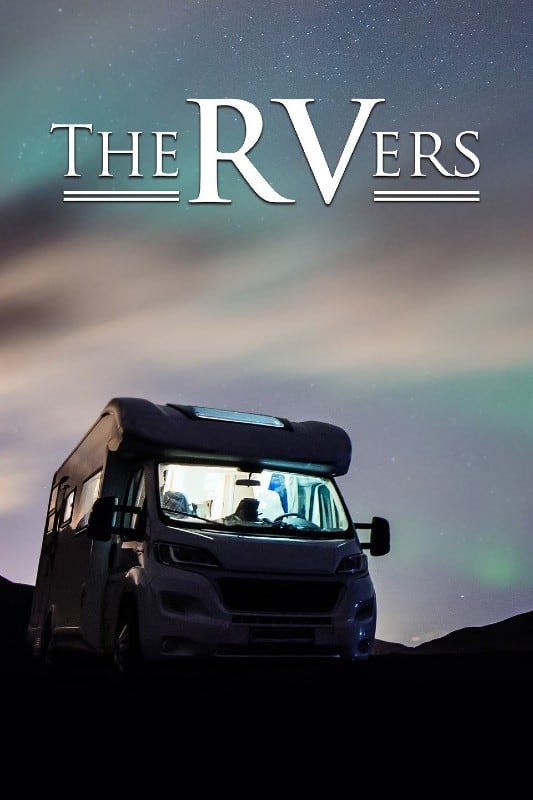 The RVers is a documentary-style TV show that focuses on the nomadic lifestyles RVers often lead. This show displays both the good and the bad sides of life on the road, and it’s a great watch if you’re considering living on the road full-time.

The show is full of great tips and tutorials for RVers. Each episode covers something fun and interesting, but also attempts to teach you something about RV life. Some tutorials show you how to replace the AC, while others are full of helpful tips on choosing an RV and learning how to drive it.

The host of the show is actually the producer – Anthony Nalli. What’s even more interesting is that Nalli himself didn’t have a lot of RV experience before starting the show. A lot of times the host is learning stuff along with the audience, which is exactly what makes The RVers so special. 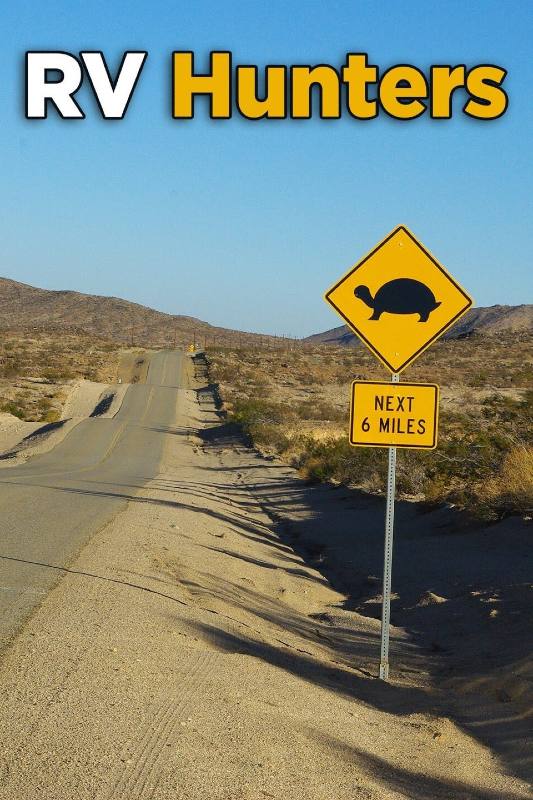 What’s great about this show is the sheer variety of RVs you get to see. From compact homes for couples to massive RVs for families of five – if you just want to see some really cool RVs, you’ll enjoy watching this TV show! 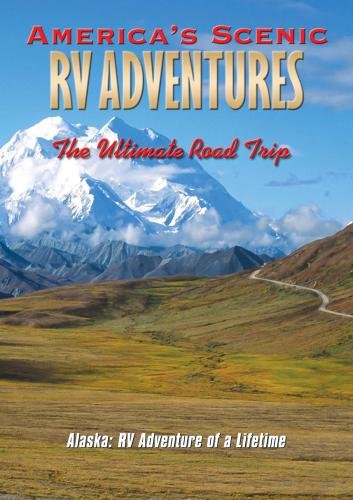 America’s Scenic RV Adventures is a collection of movies that each focus on an RV trip through a different place in a country. Each movie lasts about an hour and a half and if you just think of them as really long episodes, this totally counts as a TV show!

The series follows filmmakers John Holod and Jodie Ginter on the ultimate road trip full of spectacular sceneries and thrilling adventures. From Alaska to Mexico, this show covers some of the best routes for RVers. It’s a must-watch if you need road trip ideas, or if you just want to binge-watch eight hours of road trips all over the US!

Tiny House Nation is a Netflix show that follows a team of experts who are in the business of designing and building tiny homes. It’s not really about RVs, but some of the homes are built on wheels so I think it can pass.

One of the beauties of van life is the process of designing the layout of your new home on wheels. If you need ideas on RV layouts and furnishings, this show is a must-watch! It will inspire you to create the tiny home of your dreams, and it’s full of awesome tips on how to utilize those tiny spaces.

Clarkson decided that the bathroom is all that matters and converted his RV into a massive bathroom with a tiny bed, while May opted to convert the interior of his RV into a bar with gin on tap. The special episode is full of classic humor and ridiculousness we’ve come to expect from the trio, as well as some stunning landscape shots. It’s worth a watch regardless of your familiarity with the other TGT episodes. 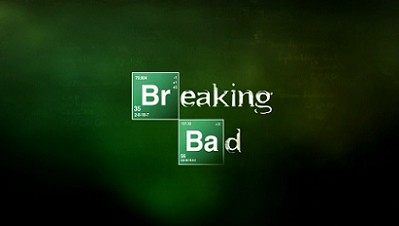 This is probably not the type of RV show that you had in mind, but hey – the RV is a pretty big part of the plot. Everyone and their grandmother have heard of Breaking Bad by now, and if you haven’t watched it yet, this is a sign that you should. The iconic TV shows follow the struggles of Walter White, a middle-aged chemistry teacher who “breaks bad” after he is diagnosed with cancer.

Faced with outrageous medical bills and the prospect of leaving his family in debt, Walter decides to apply his chemistry skills to cook meth. He partners with a former student, and for the first few seasons, they cook in an RV. Their RV struggles are not unlike those of frequent campers – they run out of gas, Jesse leaves the key in the ignition and floods the engine, and they’re always dealing with stuff flying all over the place.