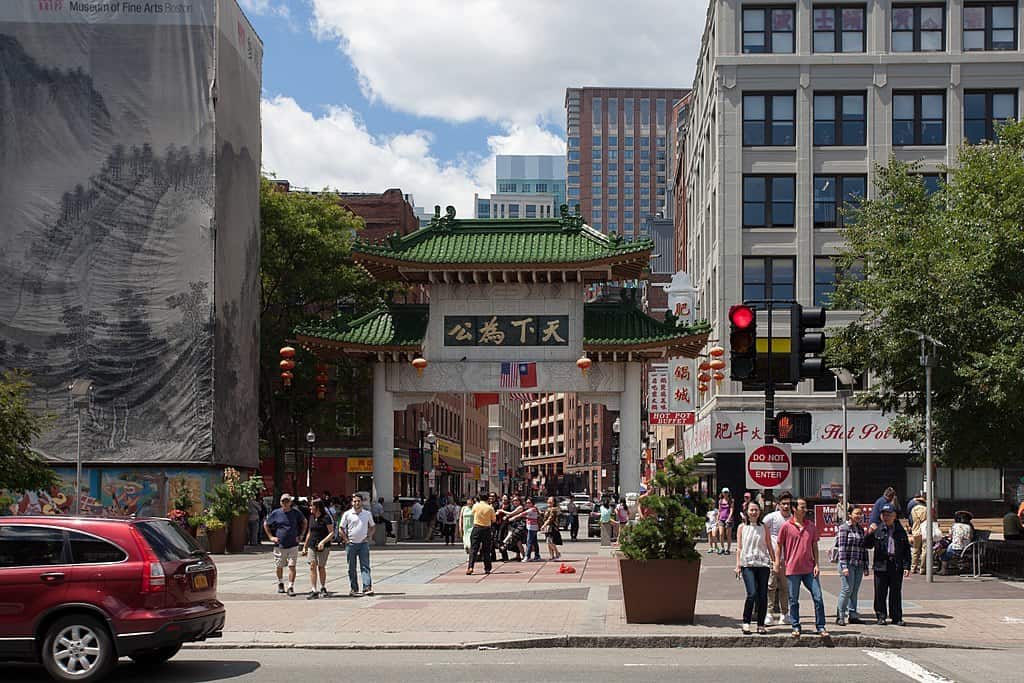 Boston’s Chinatown was built on top of a landfill. Although, the remains are nowhere to be found, Chinatown is still booming with Chinese people who live, work, and play on the streets of Boston. Boston’s Chinatown is located in Boston Massachusetts and is centered on Beach Street on the South end. It is the third largest Chinatown. A portion of this Chinatown is placed over a piece of reclaimed by a tidal flat. This newly created tidal flat was first settled on by Anglo-Bostonians. Residential properties in the area became less desirable because of railway developments, and this allowed Syrian, Jewish, Irish, Italian, and finally Chinese immigrants to settle in the area due to the low living costs for the area in the 1840’s. Each culture replaced the last to take advantage of the low costs of housing and many job opportunities.

The first Chinese that settled in this establishment were laborers coming to stop a strike against the Sampson Shoe Factory in North Adams. In 1875, Chinese laundries were becoming more popular, and started the first restaurant in the area: Hong Far Low. Due to increased need of construction, even more Chinese laborers were brought over in the 1880’s and in the 1890’s a small portion on Chinatown today was known as the Chinese colony of Boston. The population consisted mostly of men, and the Exclusion Act of 1882 meant less immigration to these parts. In 1930, the Act allowed the wives and children of the laborers to immigrate to the US, allowing more females in that part of Chinatown.

Once the Act was completely lifted during the time of World War II, Boston’s Chinatown saw a lot of Chinese immigrants making their way to the town. The growth of Chinatown boomed into the 1950’s. In the mid and late 1950’s construction of the Central Artery underwent, leaving many families in the Chinese district out of homes and businesses. This meant over 300 families without places to go. The Mass Pike Extension that was built throughout the 60’s and 70’s also took away a lot of land from Chinatown, eliminating even more businesses and homes in the process. Even as all this building and construction went on, the population continued to grow at over 25% more than it already was in Chinatown. In the 60’s and 70’s, Chinatown took on a lot of new changes such as advocacies and governing associations to help with the living arrangements and legal issues of the community.

During the latter part of the nineteenth century, there were manufacturing plants for garments that moved in on Chinatown. This created Boston’s historic garment district. This district stayed active until around the 1990’s. Resolving the decrease of funds for construction of new community housing for Chinatown, they negotiated costs and funds to do so. Chinatown was also awarded the Red Light District, also known as the Combat Zone from the city of Boston. This district did not last long. It evaporated by the 1990’s, due to pressure from the city and increasing of property values, the encouragement of building sales, and the removal of tenants who have lived there for a while.

Chinatown is the center of Asian-American life in New England. They host a multitude of Asian restaurants, markets, and festivals. They have over 28,000 people per square mile which was calculated in 2000. Close to 70% of Chinatown’s population is from the Asian culture. The median household income for Boston’s Chinatown is $14,289 per year. Currently, Chinatown is experiencing gentrification, giving big luxury residential buildings that have more spacious apartments. The buildings will also be mixed in with business areas and store fronts on the bottom of the residential apartments. This is making way to more low income housing in the form of condominiums.

Chinatown has a lot to offer as far as residential life. They have local and regional transportation services. There are also two Chinese owned bus services that are offered to the Chinese residents of the town. They provide hourly routes to tenants. Not only do they have transportation, but they also have medical services. This includes a full service hospital, low income clinic that is run by volunteers, and health schools in the area.