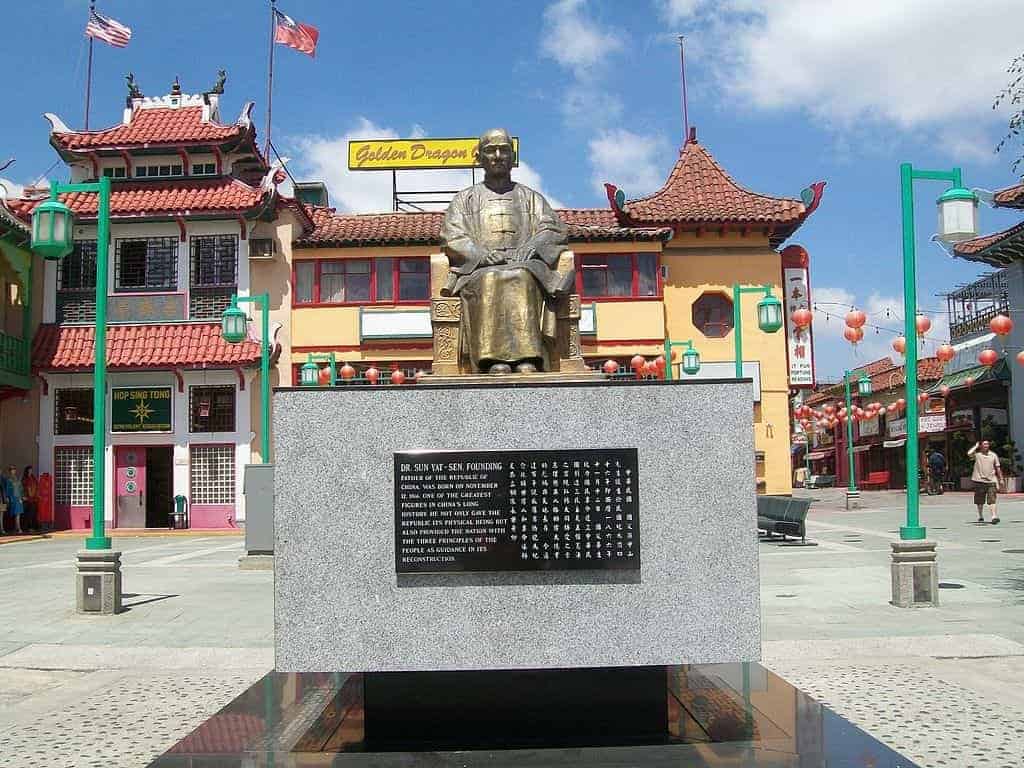 The first Chinese people to reach Los Angeles were recorded to be there in 1852. They continued to migrate there throughout 1870. By 1870, Chinatown had more of a recognizable settlement and town. It consisted of 200 or more citizens within the small block that they called home. They lived in a broken down alley that was dark, and run down. It was a short alley that was 50 feet wide, and one block long that no one wanted to go down.

The first Chinese were mostly men. They were laborers doing work such as laundry, gardening, ranch work, and road builders. There was heavy discrimination going around in the later part of the 19th century. Since the Chinese held large positions in the agricultural and laundry businesses, they flourished because of it. They expanded their territory to take up more blocks and buildings. Their population then grew to over 3000 Chinese. The Exclusion Act stopped any large amounts of growth over the years.

Since laws prohibited the Chinese from owning any land, they had to rent or lease units for their businesses and homes. This created problems later on down the road. Chinatown between 1890 and 1910 consisted of 15 streets and alleys, and around 200 building units. Not only did it have all this space, but it also had a theater, three temples, and its own telephone exchange as well as newspaper. Since there were less women than men, the act was lifted that allowed wives and children of laborers to immigrate over to even the population. This also led to community organization.

Due to the fact that the Chinese were not allowed to own their own property, few Chinese fixed up or maintained their properties. This led to a decline in the overall appearance of the town in the old Chinatown. They never paved the streets, and the Chinese cared little about what the town looked like during the end. The fight between whether or not the Chinese owned the land that so many of them have paid for gave way. All of the payments and improvements have been recorded as private, and there was no proof of anything as far as the land was concerned.

The property was then lost, and the Chinese then had to move their homes. A new Chinatown was soon to be developed. Two years passed until they had an acceptance letter stating that the Chinese could be relocated into another area of the city which then brought eviction notices to the tenants who still lived in old Chinatown. Their buildings and businesses that they once knew were crushed with a wrecking ball to make way for new buildings and businesses not owned by the Chinese.

There were many ideas, and plans that were passed through the city on where the Chinese could go, but none of them seemed to follow through. The financing was tough to come by, and that is when the help of SooHoo came. He ventured that the Chinese will finance and maintain the land and buildings themselves. They would become a self sufficient working town. This created a new vision for a completely new town. This also created a building plan with new government leaders and visions of building.

They raised $40,000 for the entire relocation project in August 1937. By the time of the grand opening, shares were put in and this rose over $100,000 for the relocation and renovations of the Chinese community. This allowed them to purchase the entire piece of land with cash instead of having to get loans or leases for the project. The first stores were open by June 1, which led way to the opening of 18 more businesses. The goal was to build and maintain over 62 units in one square block. This made way to an investment worth over $750,000 in 1941.

California’s governor Merriam dedicated Los Angeles’ Central Plaza to Chinatown in a grand opening celebration and ceremony on June 25, 1938. This was one of the Nation’s first malls, and was the first modern American Chinatown. The Chinese owned and planned the town, and having the Central Plaza gave them a hub and lexus for growth in their Chinese community. The beginning of Chinatown consisted mainly of restaurants, stores, herbal areas, grocers, factories, delis, and offices. They were moved from the old Chinatown in Los Angeles to the newly created area, just shy of a mile away.

Chinatown was decorated with colorful banners and lanterns lit up to show that they cared for and maintained their city. This was also in hopes to attract even more Chinese to their town. A parade that consisted of the Chinese youth in Federation, young men and women dressed in native costumes, as well as all the members of the government were present. All of the stores were opened, and street booths were at every corner on every block to attract customers. There were performances, lion dancing, and much more as the ceremony continued in the street.

After this opening of Chinatown, a year later a Willow Tree is planted by a pond, which is still there to this day. The first lighting ceremony that is held at the East Gate took place on the first year anniversary of Chinatown. The East Gate had to be rehabilitated in 1985 due to some wear, tear, and erosion. The mall was averaging around 20,000 visitors a week. This means that the Chinatown they envisioned was becoming a true dream.

There are still parts of the old Chinatown left behind to this day. This leads to many tourist attractions, and also a remembrance for those Chinese who live and work there. This was one of the only Chinatowns that was planned beforehand prior to building and living. This is a place of history, culture, and interest of many tourists. Visit Los Angeles’ Chinatown today for more information.