What’s the most expensive mushroom in the world? The title belongs to matsutake mushrooms, Japan’s answer to the black truffle. While prices are not quite as high as the most expensive truffles, who’s rich flavor is sought in high societies around the world, top quality matsutake retail for a respectable $1,000 per pound. But why are matsutake so sought after and what makes them so expensive?

This basket of five mushrooms costs just under $500: 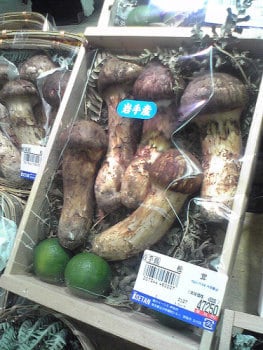 Matsutake mushrooms, or mattake for short, are said to have been part of the Japanese diet for more than a thousand years. Despite this long history, however, no one has been able to figure out how to farm them, and they must be gathered by hand. Japanese matsutake are found under fallen leaves at the foot of pine trees, hence the name – matsutake means pine mushroom in Japanese.

Why are matsutake mushrooms so expensive?

One reason matsutake have become so expensive is that while Japan’s household income increased exponentially over the passed 50 years, the number of matsutake mushrooms harvested in the country has decreased sharply due to the introduction of a bug that kills the trees they grow under. With more and more money to spend on less and less mushrooms, matsutake have achieved an almost mythical status in Japan.

More than just a mushroom, matsutake are related to the Japanese symbol for longevity. They are synonymous with the autumn season, and for many people in Japan, where importance has longed been placed upon the change of season, the mushrooms have become one of the defining characteristics of what it means to be Japanese. Another example would be sakura cherry blossoms in the spring.

Matsutake are often given as gift baskets to show appreciation or curry favor, and companies are happy to lavish the most expensive ones on high-end clients and business partners.

How do you choose a good matsutake?

Matsutake are harvested from around the end of September through the middle of November. The highest grade is given to mushrooms that have an even plumpness to the stem and measure about 6 inches in length. More important than size, however, is to make sure that the cap has not yet opened – the Japanese say to choose the one that looks like a penis instead of an umbrella. In fact, a mushroom can loose up to a third of its value once the cap separates from the stem and the gills become visible underneath.

Another factor that determines price is where the mushroom comes from. Matsutake collected from the bottom of red pines in the Tamba region outside of Kyoto are said to be the best and are the most expensive. As the country now only harvests less than 1,000 tons per year, 90% of Japan’s matsutake are imported from places like North and South Korea, China, and the American northwest. These imported varieties are much cheaper and sell for an average of 10,000 yen ($110) per kilogram.

For example, these matsutake imported from China are only about $13 for two: 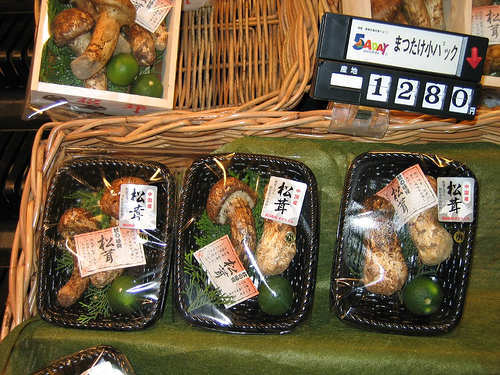 According to Japanese law, imported matsutake must be washed of dirt and many people say that this dilutes their fragrance and taste. Domestic ones are also preferred because, as with any mushroom, freshness plays a large part in texture.

That being said, most people would not be able to distinguish between Japanese matsutake and those that are imported. Some imported ones are also of very high quality, like these from Korea that cost about $420 for a basket of three: 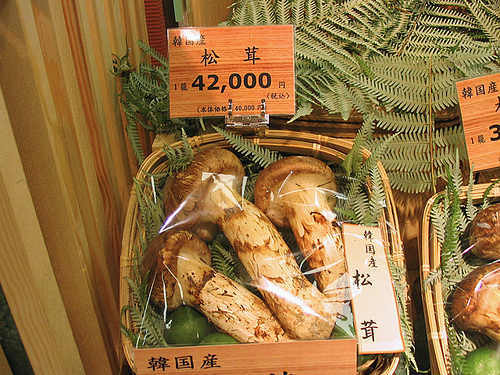 Just remember that one of the most important parts to enjoying matsutake is getting into the whole autumn experience.

How do matsutake taste?

While most popular fungi are enjoyed primarily for their taste, Matsutake are sought after for their unique aroma. The scent is both spicy and fruity, with a hint of sweet cinnamon. The fall feeling is completed by the mushroom’s pine-like earthiness.