Celebrate Songkran 2019 and Where will you get wet? – Songkran or Thai New Year (Water festivals) are a massive part of Asian culture and a big draw for tourists that want to experience the spiritual and deeply memorable celebrations for themselves. Songkran Water Festival in Thailand is surely one of most extraordinary examples of them all with its varied mix of symbolic parades and rituals, the breadth of events occurring across the country and the sheer spectacle of all that water. If you are looking to enjoy Songkran 2019 there are two important questions to ask yourself: where do you want to go and just how wet are you prepared to get!

Where should you celebrate Songkran 2019 and what can you expect?

The Songkran festival in Bangkok.

Unlike that fixed date at the end of our calendar year, the Thai New Year varies and this year’s festival takes place between the 13th and 15th of April – although some attendees do like to keep the festivities running for a little longer. Over this period, much of the celebrations are gentle and religious in nature, with a high emphasis on cleansing and family. After the reunions of Mahasongkran, which is essentially the official New Year’s Eve, there is the start of the new year (Wan Nao) and then the more energetic celebrations in the streets. As Songkran essentially aims to bring in a clean start to the new year with these cleansing rituals, it is no surprise that water plays an important part in the Songkran New Year festivities and that the alternative name is the Thailand water festival. Advertisements are full of pictures of soaking wet smiling locals and elephants spraying water and visitors are invited to come and enjoy the spectacle across the whole of Thailand. Naturally, it is the bigger cities that put on the bigger shows and Chiang Mai is said to be the leader in the Songkran water festival, wowing tourists with the parade of the statues and even letting them join in with the cleansing rituals, but there is something to be found just about everywhere.

Where will you get wet?

For most visitors this is the all-important question hanging over the celebrations of Songkran, whether you are a keen visitor looking to really get involved in the action of the water festival or someone that wishes to observe from afar and stay relatively dry. The good news for those in the former camp is that there are plenty of ways to get involved and become drenched; the bad news for those wishing to stay dry is that one way or another the water will find you. If you want to take part in the cleansing of Buddhas in Chiang Mai then you may get a bit wet but if you head to Phuket instead you can pretty much expect it as the “water sprinkling” hits town and locals arm themselves with an array of water-holding weaponry to really make the most of the festival. The degree of your drenching all depends on your choice of destination – some areas with parades and spectator sports like dragon boat racing are more relaxed but on the other end of the scale there is the giant foam party of Hua Hin. 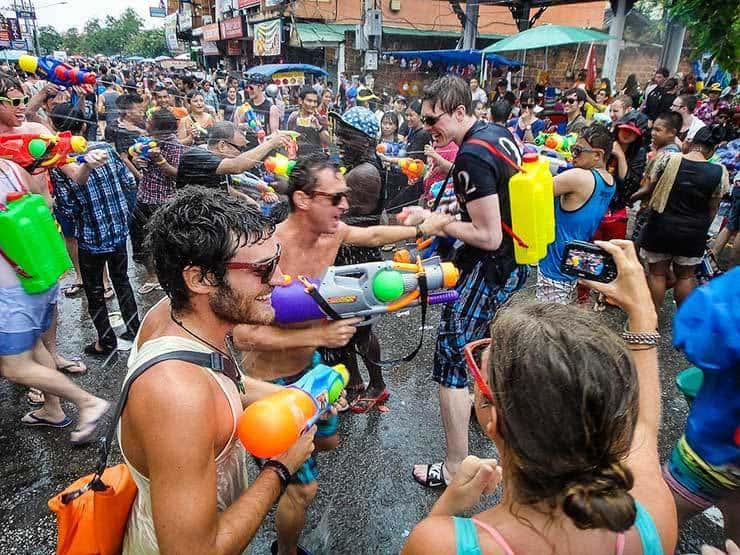 Where should you go to enjoy the Songkran Water Festival of Thailand?

The best advice for traveling to Thailand for the Songkran (Water Festival) and new year celebrations is simple: embrace the festivities and, more importantly, the water. Without the water there would be no Songkran so either pack some waterproof clothing or just get drenched, get in the middle of the action and – to excise the pun – soak it all up.