Staying in Zadar and want to visit Plitvice Lakes? Then you’re certainly in the right place because this detailed guide includes everything you need to know about traveling to Croatia’s most popular national park from Zadar!

Bus tickets and timetables, car routes, private transfer, duration of the visit, and NP tickets are just a few of the things covered in this guide to visiting Plitvice Lakes from Zadar. Read on to learn more about the trip, and see how you can squeeze it into your Croatia travel itinerary!

Zadar to Plitvice Lakes by Car 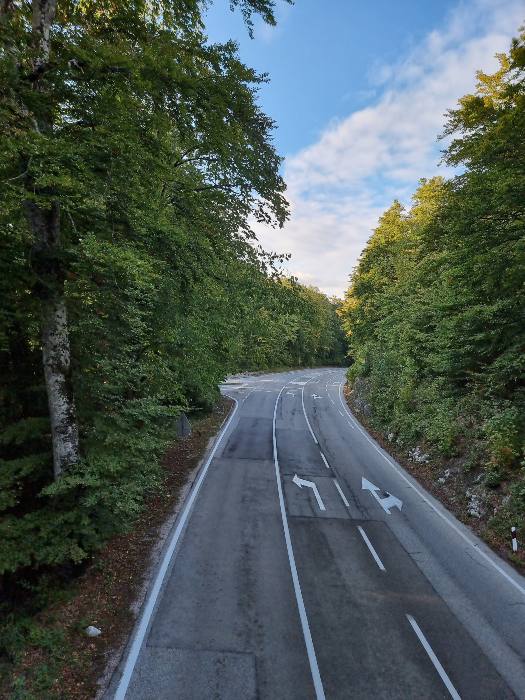 The fastest way of traveling from Zadar to Plitvice Lakes national park is by car. The distance between the two places is 119 kilometers, it takes about an hour and a half to cover that distance in a private car.

There are two ways to travel from Zadar to Plitvice lakes in a car – one takes about an hour and 20 minutes, and the other one takes approximately an hour and 50 minutes. The first route follows the Croatian highway, which is a tolled road. It’s definitely the faster route since you can drive up to 130 km/h, but you also need to pay tolls, which can be a bit pricey in Croatia.

The road that’s not tolled is slower – the speed limit is usually either 60km/h or 80km/h, and in certain areas, it can be as low as 30 km/h when you’re driving near a school. It’s important to note that are a lot of speed cameras on Croatia’s roads, and you should always drive the speed limit unless you want to pay extra money for fines.

In any case, you can drive to Plitvice Lakes in under two hours, probably in less than an hour and a half, which is certainly the fastest way of traveling. There’s plenty of parking at the national park, but it is worth noting that you might need to park on a hill between the trees. 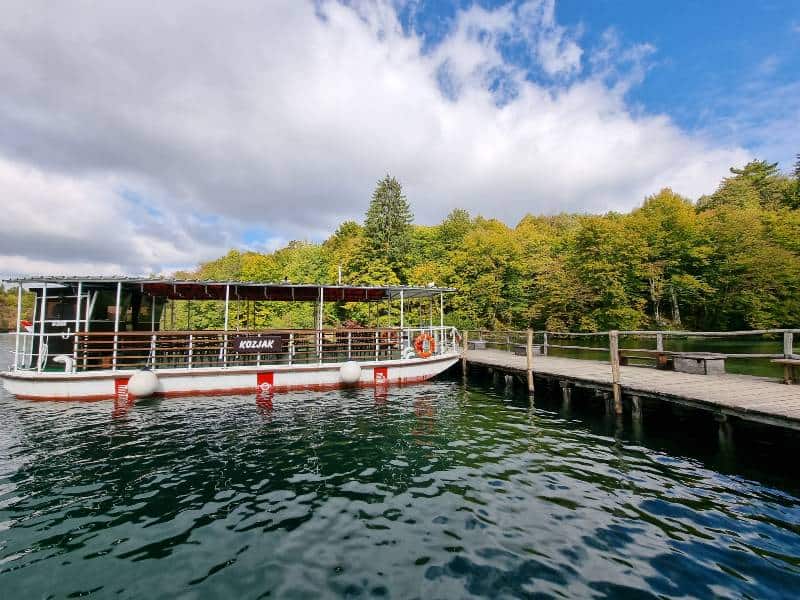 A big chunk of the parking lot is in a wooded area above the concrete parking lots, so you might need to drive on gravel roads and park near a tree. Whether you park there or on a proper lot, it’s 8 kunas for an hour of parking in the off-season, a 10 kunas per hour between June, July, August, and September.

That’s for small private vehicles only. Motorbikes can park for free, while RVs and cars with trailers must pay between 80 and 100 kunas for parking (entire day), depending on the season. That’s the price of an adult entrance fee to the park in the off-season, so it is a bit of a rip-off.

Also, it’s worth noting that there are two entrances to the national park, with big parking lots near both of them. The first entrance is situated near the Lower Lakes, while the second park entrance is right next to the Upper Lakes. It genuinely doesn’t matter where you park the car, but you should know that Entrance 2 is the closest one when you’re arriving from Zadar.

Zadar to Plitvice Lakes by Bus 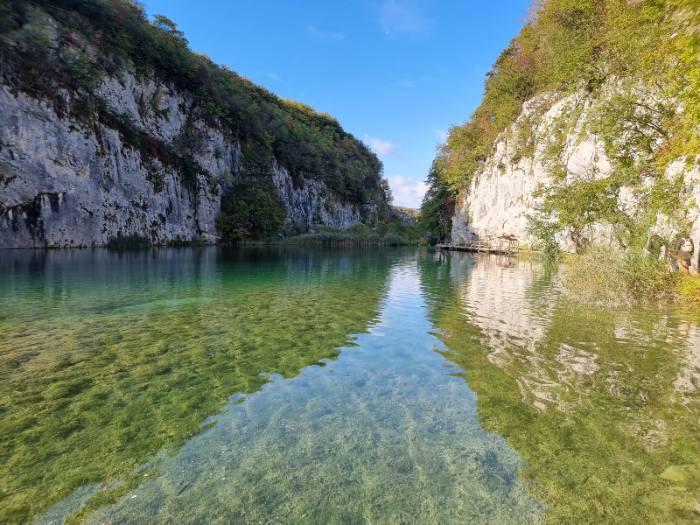 It’s possible to travel from Zadar bus station to Plitvice Lakes by bus. There are five busses per day, and the journey by bus duration is approximately two hours. The quickest public transport bus travels for an hour and 45 minutes, while the slowest bus takes two hours and 40 minutes to arrive at Plitvice Lakes.

Bus ticket prices vary depending on the time, and they can cost anywhere between 7 and 13 Euros for a one-way ticket. They’re pretty affordable, and this is generally the cheapest way of traveling between Zadar and Plitvice Lakes. Renting a car for the day will set you back at least 50 Euros, while private transfers and group tours usually cost even more money.

The last scheduled bus from Plitvice Lakes NP departs at 4:20 PM, which is pretty early in the day. If you’re trying to catch this bus, you’ll need to be done with your exploration of the NP before 4 PM. It takes at least 5-6 hours to really explore the park, so you should be on the earliest bus from Zadar to Plitvice Lakes.

It’s important to note that I am writing this guide in the winter, so the bus times and frequency for this trip are listed for the winter season. There’s currently no relevant information on timetables about bus frequency for the summer, but usually, there are more transfers to the national park from Zadar, since it is one of the most popular NPs in Croatia.

I will update this guide later when bus timetables for the summer months are listed. But this just goes to show how unreliable bus travel in Croatia is since you can’t really plan a trip or buy tickets months in advance. You currently can’t even buy a ticket online, but I’m positive that this is only because it’s the off-season and there are barely any tourists in the area.

Also, it’s common for buses to be late or delayed, for bus drivers to stop and pick up passengers off the side of the road, and for vehicles to break down for no specific reason. It’s worth noting that several bus companies operate this tour, but Croatia bus, which is the country’s best and most reliable bus operator, doesn’t. 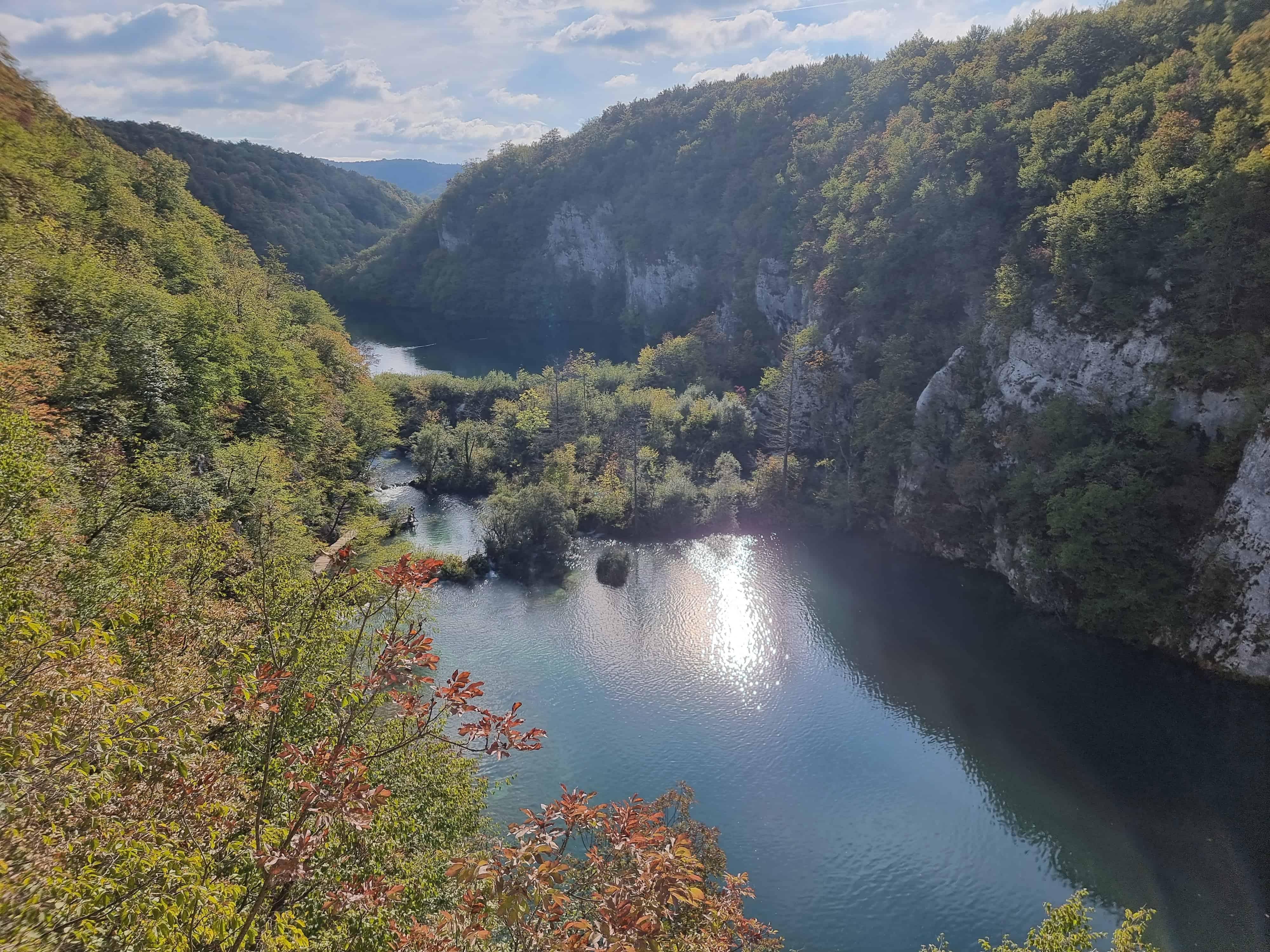 It is possible to book a private transfer from Zadar to Plitvice Lakes national park, and this is a good idea if you’re traveling in a group and you want the comfort of traveling in a car, but you don’t want to drive on your own. The private transfer usually doesn’t include a private tour of the park so keep that in mind. If you wanted a private day tour as well, you’re better off just joining one of the many group tours.

Private transfers from Zadar to the national park start at 170 Euros for a group of four people, and they include a return trip back to Zadar. However, the driver will wait for you only up to 4 hours at the destination, which is far from ideal considering it’s not enough time to properly tour the NP. It should be possible to make an arrangement with the driver if you want to stay in the national park longer, but this is almost certainly going to cost extra.

That’s why it’s much better to arrange a private taxi transfer. However, I would recommend either booking this online or having a Croatian friend arrange this for you since taxi drivers in Croatia sometimes have a tendency to try and rip off foreigners. Always agree on the price beforehand, and argue if they try to make more money for you. 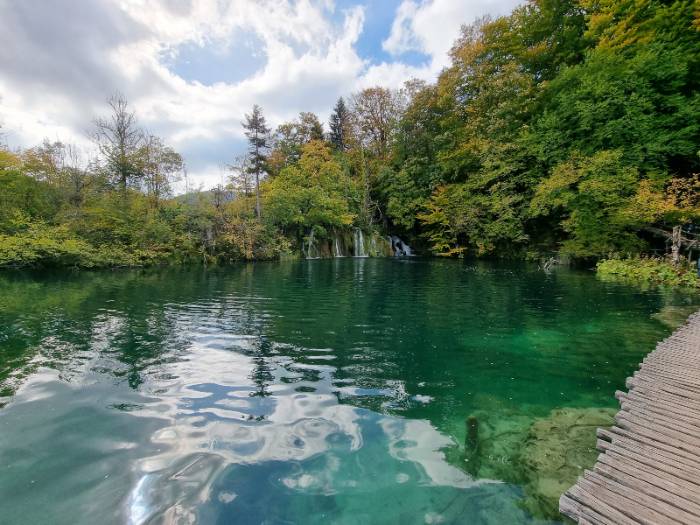 A group tour of Plitvice Lakes is a great way to explore the national park without carrying a lot of responsibility on your shoulders. All you need to do is pay, and you’ll get an experienced guide who will plan an entire organized day trip to the national park. This usually includes a private transfer, a walking tour of the park, and entrance fees.

One thing to note is that the group is on a tight schedule that needs to be followed, so you can’t really explore the park at your own pace. While I was at the park, one of the group tours was missing a person, and they couldn’t find them anywhere. Although the guide was worried out of his mind, they had to continue with the tour for the sake of everyone else.

That’s just one thing to keep in mind, especially if you’re traveling on your own and want to join a group tour. Be sure to give your number to someone else, so in case you get separated from the group, they have a way to contact you. It’s also a good idea to wear a jacket that stands out since it’s much easier for your group to notice you from a distance if you’re wearing bright colors and not blending in with your surroundings.

Plitvice Lakes tours with experienced guides are a good idea if you’re visiting the park for the first time, and you don’t want to stress about any logistics. The main advantage is that you just need to provide the money, and the agencies and guides will do everything else for you.

One thing worth noting is that most of these tours include optional lunches that you need to pay extra for. It’s possible to buy food at stalls at the NP, but I have to point out that it’s a total rip off – it’s about 10 Euros for a dry sandwich with some local cheese, and the best thing to do is pack your own lunch and snacks, and bring them to the park. In case you want to buy drinks or food at these stalls, you should know that they only accept cards, not cash.

Another thing worth noting is that there are a couple of restaurants in the areas near the entrances, so you can have a proper lunch in the national park. The restaurants are a bit pricey, but the food is excellent and worth the price.