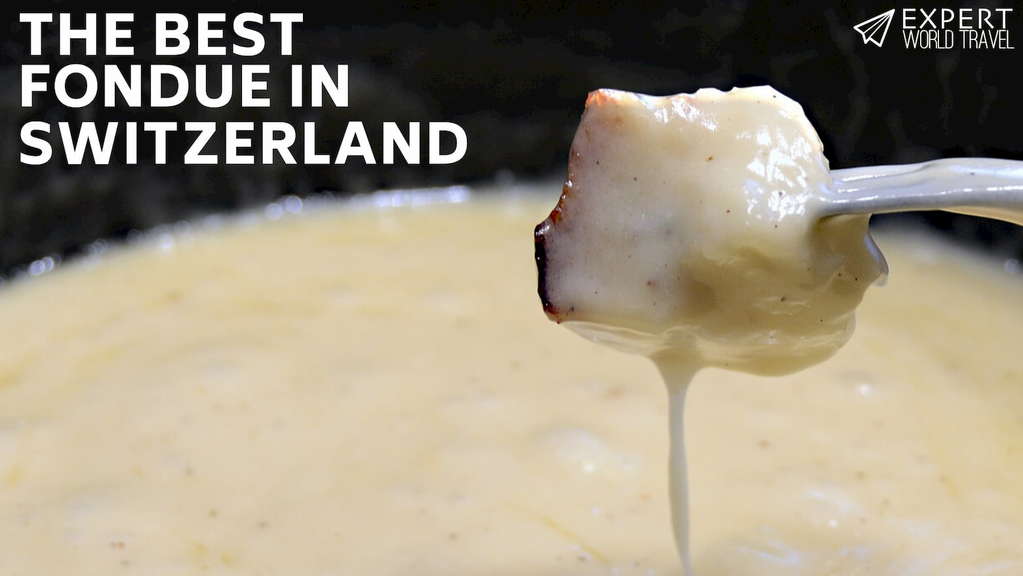 The Best Fondue in Switzerland

If you’re planning a trip to Switzerland, be sure to put sampling fondue on your list of things to do. Although its mainly a winter dish for the Swiss, you’ll be forgiven for indulging in this convivial dish in the summer. Part ritual, and part traditional fare, fondue came about in the 1930s as a result of an ad campaign by the Swiss Cheese Union. The natives found it to be a great way to avoid wasting leftover cheese and throwing out stale bread.

As with most dishes, the Swiss came up with other variations, like a tomato fondue served with boiled potatoes, mushroom fondue, and more. You’ll likely find these fondue variations on menus around the country but go with cheese fondue for the real McCoy. And although Switzerland is famous for chocolate, a fondue of chocolate isn’t a Swiss tradition. Chocolate fondue was born inside the head of a Swiss restauranteur living in New York City back in the 1970s and American brides rushed to put fondue pots on their gift registries.

It’s easy to find fondue in Switzerland, and this list of places to find the best in the country’s four main cities, Zurich, Geneval, Lucerne, and Bern is a good place to start. But first, brush up on the etiquette for this ritualistic dish.

For the best fondue experience, learn a little background about the ingredients. Most Swiss fondues are moitié-moitié, meaning half Gruyère and half Vacherin fribourgeois. Gruyère is mildly sharp and salty, and Vacherin fribourgeois, made from unpasteurized cow’s milk, has an acidic, buttery flavor. Fondue fibourgeois is made with Vacherin fibourgeois only and water rather than the usual white wine. In the German-speaking region (Zurich and Bern), fondue may be half Gruyère and half Emmental (the “holey” slices Americans call Swiss cheese).

Whenever wine is served before a meal in Switzerland, it’s customary to clink glasses with each person at the table one at a time while looking them in the eye. Don’t cross arms with anyone. The long fork placed on the table is for dipping pieces of bread into the fondue. Pierce your chunk of bread well with the fondue fork. If it’s dropped into the pot, tradition says you pay a penalty like buying a round of drinks.

If you’ve been given a shot of Kirch or some other spirit, it’s traditional to drink it halfway through the meal. The Swiss say it aids digestion. When you get to the bottom of the pot, you’ll find a crusty golden layer at the bottom. This is called la religieuse (the nun). Extinguish the flame and use a knife to loosen the crust. Cut into pieces and share it around the table.

Where to Eat Fondue in Switzerland

Zurich is a busy city with plenty of scenic vistas. Enjoy it along with a choice of 17 kinds of fondue in an alpine hut setting at the top of Zurichberg, a wooded hill overlooking Lake Zurich. The restaurant Chalsap (Cheese Alp) is in an ancient renovated stable on a former farm. Play it safe and order the moitié-moitié or Chalsap Fondue, a house blend made with a recipe handed down generation after generation. Or go daring with Bull’s Blood made of Vacherin, and Gruyère with hot, spicy chili.

Located in the Hotel Adler in the center of Niederdofo, Swiss Chuchi serves Swiss specialties including cheese and meat fondues. The atmosphere is rustic with wood-paneled walls and a lifesize cow overlooking from the balcony. Try the Adler House Blend made with four kinds of aged cheeses. The Lady Fondue is an interesting choice made with prosecco and pears. Or try a hearty meat fondue. The restaurant also serves Swiss classic dishes such as Alp-herders macaroni and Zurich ragout with rosti. Cordon blue is another specialty and the entrecote is comparable to a rib-eye or Delmonico steak in the English-speaking world.

It’s hard to beat Fribourger Fonduestübli for authentic and hearty Swiss fondue. The smell of cheese is strong and greets you to a cozy dining room with rustic decor. The atmosphere is casual with a friendly mix of locals and tourists. The house specialties include Fribourger cheese fondue alone or moitié-moitié, a dual blend that includes Gruyère. Waiters refill bread and potato baskets often. For a burst of fruity flavor, ask for pears or pineapples with your fondue. Fribourger Fonduestübli features a long list of fantastic wines, and you can end your meal with a shot of kirch, a fruity brandy popular with the Swiss.

Geneva is a lovely city in the south of Switzerland, a French-speaking region surrounded by the Alps and Jura Mountains. At
Le Gruyérien, you’ll dine at an out-of-the-way place 12 miles outside the city center. The atmosphere is homey and laid back with traditional chalet-style decor. Fondu options include the traditional moitié-moitié, a light vacherin fribourgeois, and a 100 percent chèvre (goat cheese) variation. Or go for special variations such as fondue aux bolets with porcini mushrooms, or fondu al a tomato served with boiled potatoes instead of bread.

Gorgeous Lake Geneva is the city’s main attraction, and dining at La Buvette des Bains gives you a view of the famous Jet d’ Eau, a powerful water fountain that shoots a plume of water high into the air. A bit on the quirky side, the lakefront restaurant is a former public bathhouse that was once a part of the Bains de Paquis, Lake Geneva’s natural swimming area. A variety of fondues are on the menu including a specialty made from Vacherin cheese and a sparkling wine called crémant, rendering a delicate fruity taste.

Café du Soleil is near the Palace des Nations, the U.N.’s European headquarters. It’s one of Geneva’s oldest restaurants and a great place to get authentic Swiss fondue made with cheese from La Rocha, a medieval village north of Gruyères where a cheese of the same name is produced. The restaurant also features a delicious cheese-based menu, and the portions are generous. The atmosphere is friendly and Café du Soleil is highly popular with Geneva’s locals.

Bern is Switzerland’s capital city and located in the German-speaking region. It carries the title of UNESCO World Heritage site, thanks to its rich history. In business for over a century, Restaurant Harmonie gets rave reviews from online communities like Trip Advisor as having “the best fondue in town”. Look for it after visiting the famous Zytglogge (Clock Tower). The restaurant is right next door. The traditional moitié-moitié is served along with a fondue aux truffles (with truffles) and champagne and Bärner Chrütter” (Bernese herbs).

Have your fondue gazing at views of Bern’s Old Town from the fondue veranda of the Rosengarten Restaurant. Go at sunset and watch the lights of the Old Town begin to twinkle from the panoramic window. The fondue flavors include the house specialty, a mix of creamy Heitenrieder, and Schönrieder mountain cheese. Or try the Seisler chili and truffle fondue for a tasty difference. Leave room for a dessert of sweet apple cider cream. Enjoy it all by a crackling open fire when the weather is chilly.

For a different twist on your fondue experience, head for one of four fondue gondolas at the Marzilibrücke Restaurant. Located on the banks of the River Aare, the cable cars came from the holiday region and are charmingly decorated. The menu includes a classic cheese fondue with black truffles served with bread, potatoes, silver onions, and pickled gherkins. Afterward, you take a stroll along the scenic river.

Lucerne is a popular town for tourists with a lake that reflects the peaks of Mount Pilatus and Mount Titlis. The Fondue House Luzern Is inside Hotel Falken. You’ll get three tantalizing varieties of fondue in one meal by ordering their popular combo. Choose from cheese, chinoise (meats in broth), and bourguignonne (meats in oil). Bread and potatoes are served as sides. It’s not the most authentic fondue in town, but a good way to sample a variety of flavors.

Restaurant Fritschi has a traditional cheese fondue starter that is said to be Lucerne’s best. Follow it with a delicious rosti with bacon or bratwurst. It’s located in a beautifully painted building you’ll want to take a photo of. The artwork on the floors and walls give the restaurant a medieval atmosphere. They serve a wonderful local wine called Vendant and a perfect apple strudel for dessert. 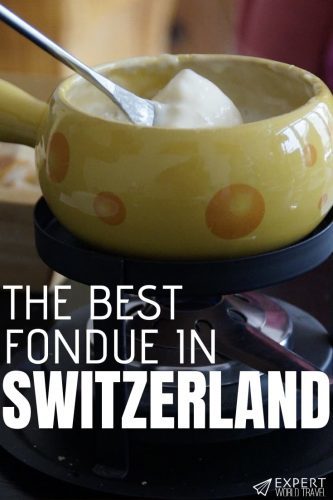