Oh Canada, the home of such wonderful nature. And although the climate there is not my favorite, I do have to admit that its gorgeous scenery is a good enough reason to endure the cold. But, that’s the photographer in me speaking, and not the rational human who can’t function when it’s below 10 degrees Celsius.

I am always mesmerized Canadian lakes. They are always stunning, big or both! And, there are so many of them. Did you know that there are over 30,000 lakes in Canada?! I kid you not, that figure is true, and it only accounts for lakes that have a surface larger than 3 square kilometers.

So, today I decided to share with you the 15 largest and/or most beautiful lakes in Canada. And trust me, it was hard to pick just 15!

Most of these lakes are surrounded by mountains, with water that is a stunning shade of turquoise. And all of them photograph beautifully, so if you do visit any of them, do not forget your camera. And also bring a drone if you have one -

just imagine all the stunning aerial footage that you could capture! Located in Alberta, Lake Louise is part of the Banff National Park. It is just a few miles away from the Lake Louise hamlet (human settlement), and also very close to the Trans-Canada Highway. That means that it is very easy to get to it, so you have no excuses to miss seeing it in person! Lake Louise is actually quite small when you compare it to some other lakes in Canada. But it is nonetheless gorgeous, and has a lot to offer – particularly in the winter. Since the temperatures there are often below zero, the lake freezes in the winter. It then becomes the perfect area for ice-skating and ice fishing, with kayaking and canoeing being the preferred summer activities. Even though it is also situated in the Banff National Park in Alberta, there are plenty of things that make this lake unique. And its color is one of those things. Lake Moraine is a gorgeous shade of turquoise, which it gets from the rock flour that is continuously deposited into the lake. If the lake looks familiar, that is because it is featured on the Canadian twenty-dollar bill, and also in Windows’ default backgrounds. But I’m sure that you could take a much more stunning photograph, and would love to see it! The Algonquin Park in Ontario is home to thousands of different lakes, rivers and creeks. Therefore, it would be impossible to name just a few. But many of those lakes are perfectly suitable for fishing in the warmer months, so grab your pole and bait and be on the way! What is particularly gorgeous about these lakes is that the shores of most of them are actually forested. In the autumn, this means that the lakes are enclosed with gorgeous shades of green, yellow, orange and red, which makes for stunning (aerial) photographs. I will show you some gorgeous photos of the Pog Lake in Algonquin Provincial Park. The area just north of the border between Canada and Alaska in British Columbia is the home of the Bennett Lake. Actually, the southern area of the lake belongs to the territory of British Columbia, but the northern part of the lake is in Yukon Territory.

In the past this lake was frequented by gold seekers who had to pass it in order to get to the Yukon River. Today, it is the perfect setting for sailing and swimming in the summer. In the winter, the lake freezes and becomes a part of snowmobile routes, as well as an ice-fishing destination. In the eastern part of the Banff National Park we find Lake Minnewanka, the second longest lake of the Canadian Rockies. It is a glacial lake surrounded by mountains, and it is fed by streams that flow down those mountains and into the lake. In the 20th century the level of the lake rose by 30 meters and as a consequence the resort village of Minnewanka Landing was entirely submerges. Because of this, the lake attracts many scuba divers, who are eager to see not only the submerged village, but also the submerged dam and bridge pillars. It would appear that the Banff National Park in Alberta is home to yet another stunning lake. Similarly to Lake Moraine, the Peyto Lake also gets its mesmerizing blue-green color from the glacial rock flour that flows into the lake. But, the color varies season to season; it is brightest in the summer. So, if you are gunning for a few gorgeous photographs, you will be better of visiting this lake in the warmer months. And to get those photos, you should go to the Bow Summit, which provides an incredible overview of the entire lake. But beware; it is usually flooded by tourists, particularly in the summer. In the Similkameen Valley of British Columbia, a truly unique sight awaits. What was once a medicine lake for the Okanagan Syilx people is a protected area today. The Spotted Lake gets its name from all the spots that form on its surface, due to the many mineral deposits in it. In the summer, these minerals harden and you could technically walk on them, around the spots. I say technically because the lake can only be viewed from a fence, and the lake is not really accessible otherwise. Sadly, this also means that there is not much to do there, other than admire the lake and take beautiful photos. As one of the five Great Lakes, Lake Ontario is naturally a sight you must see in Canada. Well, one part of the lake is in Canada and the other is actually in the United States. And if you are brave and fit enough, you could attempt to swim across the lake. Only 50 people ever have done it, and the swim itself takes a little bit more than 24 hours to complete. Since the lake is extremely deep, it never actually fully freezes. Ice sheets do form, and they can cover anywhere from 10% do 90% of the lake, depending on how severe the winter is. Naturally, that makes in excellent spot for some ice fishing. 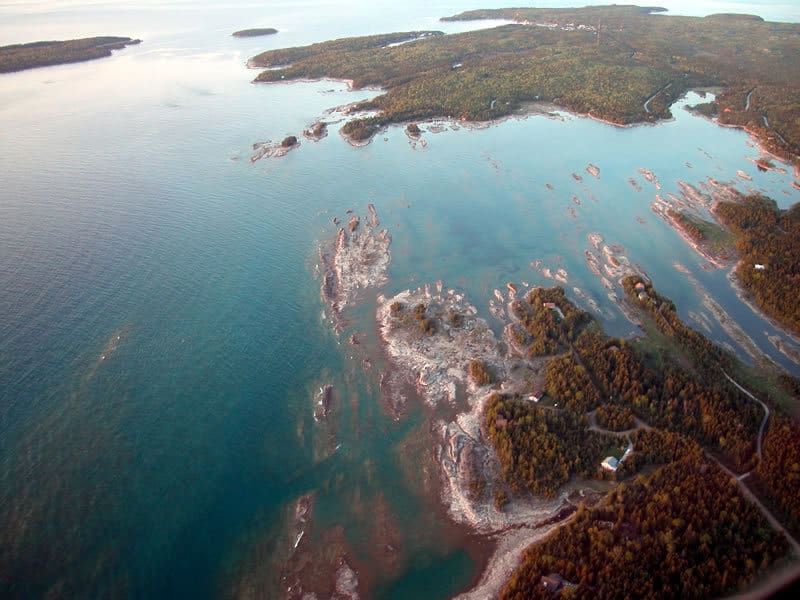 Technically not 100% Canadian, Huron is the eastern part of Lake Michgan and forms part of the border of the USA and Canada. It is one of the five great lakes, so is huge in terms of area at 59,600 km². So, it is certainly a lake to behold, if only to take in it's majesty and size. Apart from the stunning scenery, you can also see a lot of wildlife if you visit the Maligne Lake. Deer, elk and even bears life in the nearby forests, and if you are lucky enough you could catch a glimpse. Just be sure to keep your distance – particularly from the bears. :> Image Courtesy of Dogwood BC

And we continue with bears! The Great Bear Lake is the biggest lake entirely in Canada, with a surface area of some 31,150 km2. The lake has a rich history, since ancient fisheries were located in the spots where the lake meets the river. However, the legacy of such rich history is nowhere near as glamorous as one would expect.

In fact, fishing at the lake has abandoned almost completely today, due to the lake’s toxicity caused by build-ups of heavy metals and mercury. However, even though fishing is out of the question, plenty of people still go for rides in canoes and other boats, and there is no reason why you should not be one of them. Anette Lake in Jasper National Park in Alberta stands out among Canada’s thousands of lakes due to its beach setting. A marked hiking path will take you straight to the lake and give you a chance to check out all the beautiful scenery surrounding it. And a swim in the lake (in the summer) will be the perfect way to cool off after the hike.

If you’re not one for swimming in fresh water, I bet a picnic sounds more appealing. Well you are in luck because there are several picnic spots surrounding the lake. Enjoy some delish food while admiring the picturesque views of the sun setting behind the lake – sounds like paradise to me. The Emerald Lake is located in Yoho National Park in British Columbia. It is the largest lake in this park, as well as one of its most popular attractions. A hiking trail surrounds the lake and it is perfect to get a good view of the entire lake and all of its gorgeous surroundings.

In the summer there are canoes that you can rent and go for a ride across the lake. On the other hand, in the winter months, the lake freezes and becomes a very popular destination for cross-country skiing. If you wish to visit this beautiful Canadian lake, you should stay at the Emerald Lodge, which is situated at the very edge of the lake. The Abraham Lake is a very different from most other lakes in western Alberta. That is because it’s an artificial lake that was created as a result of the dam on the North Saskatchewan River. And it also has that gorgeous turquoise color that is caused by glacier rock flour deposits. The Abraham Lake is particularly popular among photographers in the winter months. This is because of the bubbles that form under its frozen surface, which make for exceptionally stunning photographs. You can see that for yourself in the photo above. The bubbles form because of methane gas; the dead plant leaves on the lakebed release methane, and when the lake starts to freeze they become trapped under the surface. Just half an hour away from Lake Louise, Bow Lake is one of the largest lakes in Banff National Park in the Rockies. It is located at the base of Bow Summit, which can be clearly seen on the surface of the lake on a calm day. Now that would make a stunning photograph! And just imagine aerial footage… It is also a great place for a picnic or a stroll along the shore. Other than that, there’s not much to do there. But photographers will enjoy this area because of its picturesque scenery, which is why I just had to mention it. Garibaldi Lake is located in British Columbia, some 20 kilometers southward of Whistler. It is part of the Garibaldi Provincial Park that stretches over 1,950 km2. The water of the lake is a beautiful shade of turquoise, and its shores are surrounded by mountains. In fact, only the northwestern part of the lake is not closed off by a mountain.

A hiking trail will lead you through the park and to the lake, which is perfect for adventurers. The hike is somewhat difficult because it goes uphill, but the view at the end of the trail is more than worth it. You can also set up camp near the lake, and truly enjoy the nature in this part of Canada.

And there you have it, the top 15 lakes to see in Canada. Of course, there are many other stunning lakes that Canada is home to, namely the rest of the Great Lakes. But I had to draw a line somewhere, and so I did at 15.

I would love to read your thoughts on these lakes, particularly if you have already visited some. In that case, be sure to include a photo in the comments! :>