Things To Do In Evora

Located around 130 km east of Lisbon, Evora is a stunning city with a magnificently preserved old town that makes a great day trip. Situated in Portugal’s Alentejo province and is teeming with Roman and medieval history.

What’s more, unlike the country’s capital, Evora did not suffer at the hands of the 1755 earthquake that destroyed many of Portugal’s oldest buildings. Consequently, it boats some of Portugal’s best-preserved historical sites and architectural wonders.

From gory chapels to neolithic sites to Roman ruins to exquisite works of baroque architecture, Evora really is a melting pot of historical wonders – it’s no surprise that its old town has been designated as a UNESCO World Heritage Site.

Despite the prestige of these attractions, many of them are entirely free to visit. Plus, the ones with entrance fees have remained very economical options. This means there really isn’t anything to stop you from visiting all of the must-see attractions, so be warned that you might end up wanting to spend longer in Evora than you first thought.

Here, we’ll whiz through some of the best things to do on a trip to Evora but, as you wander through its enchanting streets, you’re bound to find more sights that lure you in. 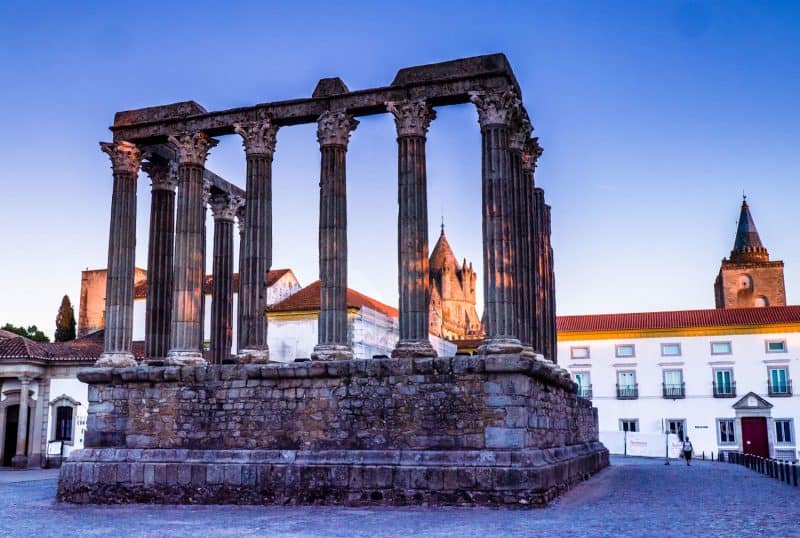 Roman Temple (or Temple to Diana)

Known for its Roman heritage, what better way to kick off a list of things to see in Evora with its chief Roman tourist attraction, the Roman Temple. This structure was initially constructed in the 1st century AD, although modifications were made in the 2nd and 3rd centuries, and remains just as impressive today as it was back then, albeit in a more decrepit way.

The Corinthian pillars are the most prominent feature of the ruins, which are located at the highest point in Evora, Portugal. This strategic location meant that even long after the Roman era, the temple was maintained for use as a fortress, helping to preserve the building.

At one stage in history, the temple was incorrectly assumed to be a dedication to the Roman goddess of hunting, Diana. Although it’s now thought that this was not the case, the name has stuck in the memory of many, and you’ll often hear the temple referred to as the ‘Temple of Diana.

Whatever you decide to call it, you’ll be pleased to know that there is no charge to view this historical temple from the street. Despite its might appearance, it isn’t the largest structure and you can’t enter it, so don’t expect to spend more than half an hour taking in the sights. 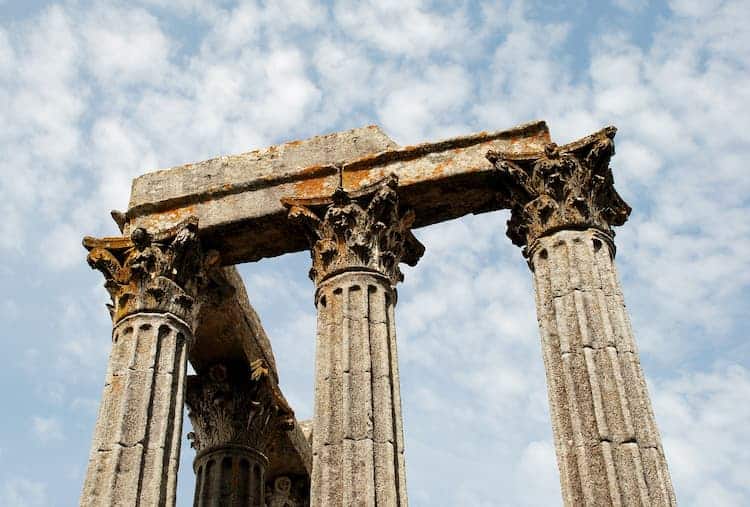 Sticking with the Roman theme, another fantastic Roman attraction for you to explore in Evora is the Termas Romanas. The Romans were known for their lavish bathing spots, and the baths located beneath Evora are no buck to the trend.

They would have been a key public building at the time, where citizens would not only bathe but also socialize (and possibly plot to kill one another, knowing the Romans).

Interestingly, the baths weren’t discovered until 1987, when an excavation was carried out beneath the town hall building. Nowadays, you can roam around the remnants of the ancient buildings, and you’ll spot signs of pools, baths, and even the ‘central heating system’ that kept temperatures agreeable for the bathers.

So how much will a tour around these baths set you back? Nothing! The baths are free to visit and are open throughout the week. 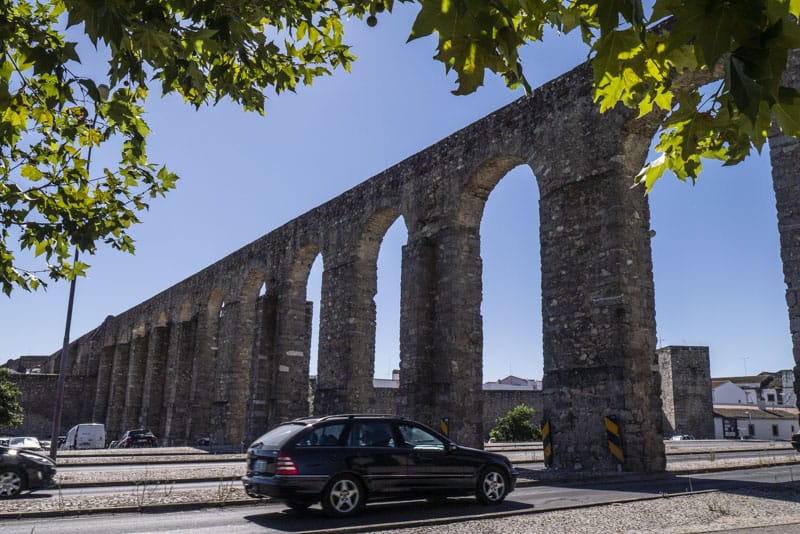 But how did the Romans manage this lifestyle of luxurious bathing? Didn’t people in the olden days rely on buckets of water from wells or something? Nope. The Romans were incredible engineers, and they’re famed for constructing aqueducts that brought water from surrounding areas to their residential areas.

Although Evora’s Agua de Prata Aqueduct was initiated by King João III in 1532, it’s thought that his construction work followed Roman-laid foundations, and even used some of the same infrastructure. The remains of the aqueduct span roughly 9 km and the mighty arches can be glimpsed from all over the city. The best view I got (seen above) is from just outside the city walls.

What’s more, as you wander around Evora’s streets, you’ll notice tonnes of old fountains that were constructed to siphon off water from the aqueduct’s supply stream. However, if you want to get a full sense of the aqueduct in all its glory, many people opt to walk (or cycle) the entire route of the remains, soaking in the Portuguese countryside, dotted with the famous cork trees, as they do so. 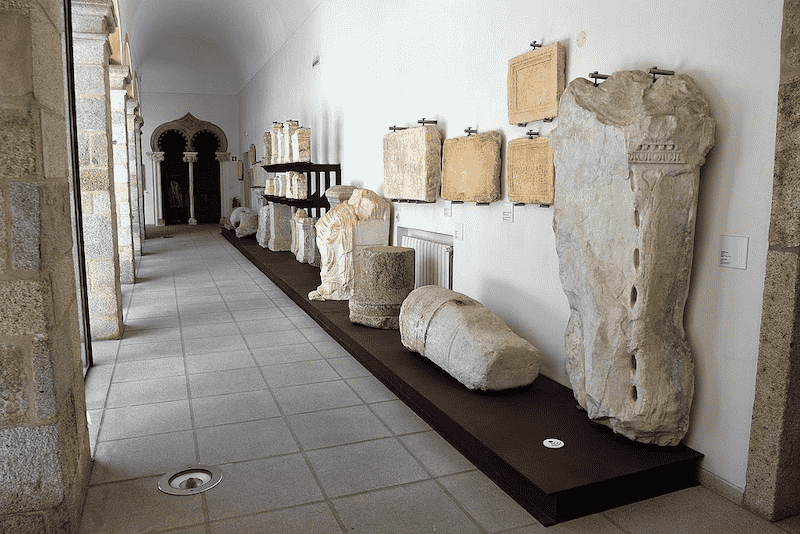 If, after checking out all those ruins, you want to see some history from the comfort of a modern facility, then head on over to the Evora Museum to explore some of the city’s cultural treasures.

The museum is located in a former bishop’s palace and is home to more than 20,000 historical trinkets, including paintings, jewelry, furniture, ceramics, and even tombstones from years gone by.

Unlike many museums, the interior of the building is light, spacious, airy, and refreshing, and it’s a great spot for the many temporary exhibitions that set up shop within it.

Probably the most famed permanent display is the series of thirteen images that comprise a single piece of work known as the ‘Life of the Virgin’ exhibition, which dates way back to the 15th century (and was originally located in the city’s cathedral). With an entrance fee of just €3, it’s definitely worth spending a few hours here to really get a sense of the city’s past.

10 am to 6 pm between April and October 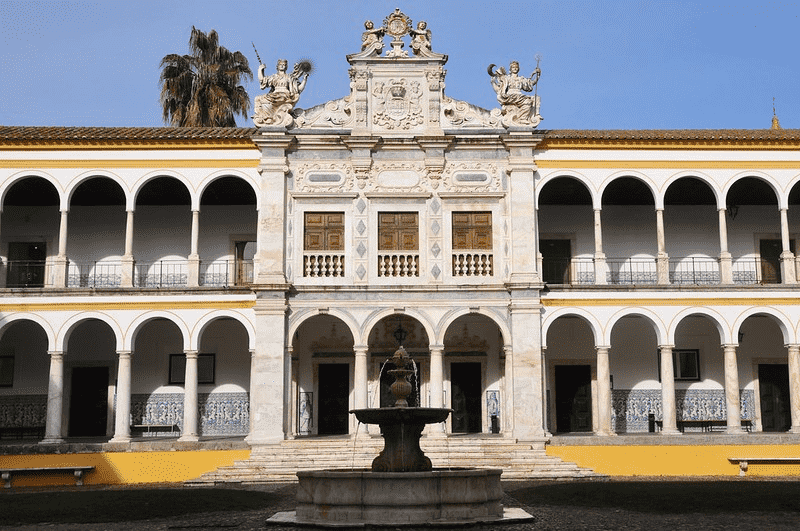 Evora’s University is another example of a building that strikes the perfect balance of blending old with new. It’s the second oldest university in Portugal (with the first being the University of Coimbra, another impressive feat of Portuguese architecture), and it features classic Renaissance architecture with baroque additions here and there.

The preservation of the architecture is excellent, and notable features include the marble work, the blue-and-white tiling (known locally as ‘Azulejos’and found all over Portugal), and the frescoed ceiling of the library.

Despite all this history, the university is fully functioning as an educational center (it was re-established in 1979), and it conducts various higher education programs that are open to both national and international students. Tickets cost just €3 but remember that it is a university and there may be classes going on within some of the rooms. 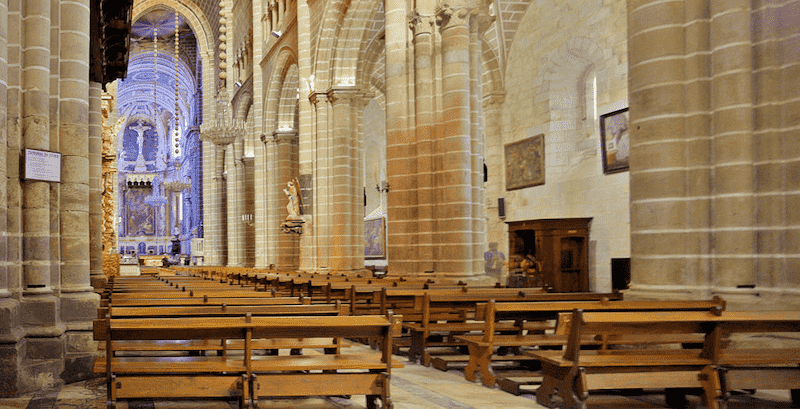 Officially termed the Basilica Cathedral of Our Lady of Assumption, the Evora Cathedral could easily be mistaken for a fortress at first sight. This dominant tourist attraction is a formidable structure that was built in 1283 and remains to this day the largest cathedral in Portugal.

Its elegant gothic arches, lavish baroque chapels, and spectacularly detailed carvings (there are 12 apostles chiseled into the main portal) give rise to a truly unique feel both inside and out.

For €2.50 you’ll be able to admire the church and its gothic cloisters, but we definitely recommend spending an extra euro to take a trip up to the rooftop where can you can admire the pointed spiers in their full glory as well as take full advantage of the undisturbed views of the old town and neighboring countryside. 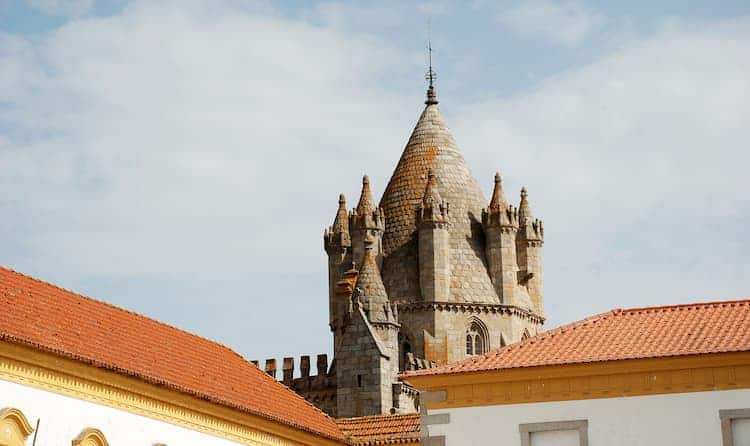 If you find yourself feeling a bit wiped after touring around so many historical attractions, we definitely recommend heading over to Evora’s public gardens. It’s the perfect place to head to recuperate and get your nature fix.

We definitely recommend taking a picnic or snack with you – if you haven’t yet sampled a pastel de nata (a traditional Portuguese custard tart) then you’re missing out – or there’s a handy outdoor cafe where you can pick up a few last-minute nibbles.

There’s also a play area for children in the gardens and if you’re there during the spring you’ll have the joy of witnessing the flowers coming alive with a show of color.

Even here, however, you can’t escape history entirely – the gardens are located on the site of a 15th-century pavilion ad were designed to mimic gardens of the past, and they even feature some fake ruins just in case things were starting to feel a bit too modern in this historic city. 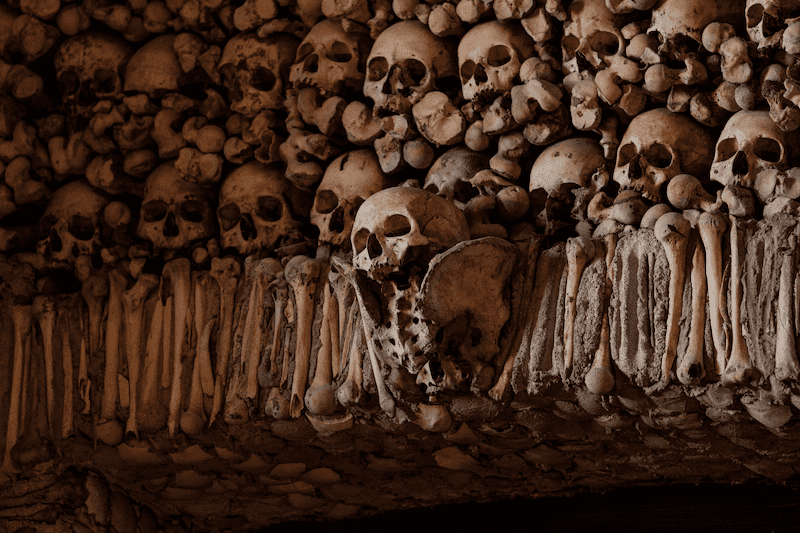 The Church of São Francisco was constructed between 1480 and 1510 in a classic Portuguese Gothic style. Restoration works finished in 2015 and it now features a museum with various relics.

The main attraction of the church, however, is its Chapel of Bones. Yepp, you heard us right. The Capela dos Ossos is, as the name suggests, features very real, very human remains along its walls and columns.

The remains are estimated to belong to around 5000 humans, which were moved there by monks in the 17th century to make room in the local graveyards, which were becoming overcrowded. The remains are artistically displayed and, along with two mummies, are intended to invoke an appreciation of life (and death) in visitor’s minds.

This is further homed in by the Latin inscription in the entrance that translates to ‘We bones, that are here, for yours await’ – a little bit creepy, right? Despite its creepiness, the chapel draws in thousands of visitors a year and is one of Evora’s most popular attractions.

The entrance fee is slightly higher than the attractions we’ve looked at so far but, for €5, you’ll get a ticket to the chapel that also includes entrance to the church museum – definitely worth the money.

Price: €5 for the chapel and museum 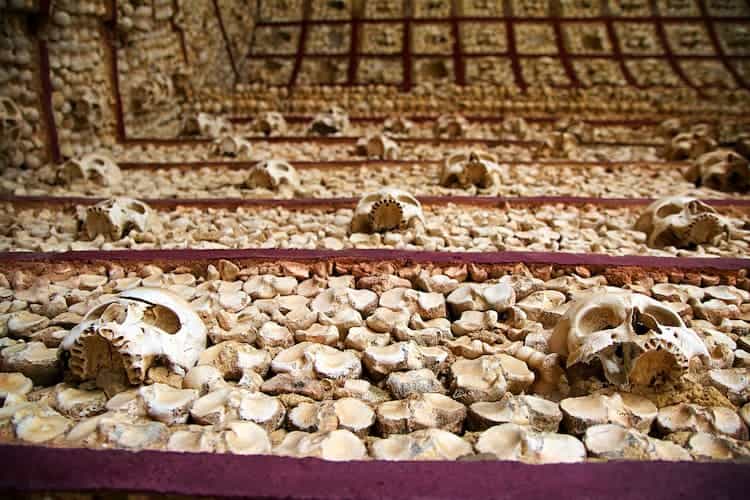 Okay, so strictly speaking the Almendres Cromlech is located about 15km west of Evora… but when there’s one of Europe’s biggest neolithic sites on your doorstep you just have to include it on your Evora to-do list anyway.

Thought to be formed around 7,000 years ago (making it older than England’sstone henge’), the site consists of 95 granitic stones stood upright and positioned in the shape of two large circles.

If you peer through the lichen on the stones, you can spot various shapes engraved on them, and some even take on human-like features. It’s thought that in the past the stones were linked with astronomy, rituals, and the summer solstice.

To make matters even stranger, there’s a 2.5m stone, called the Menhir of Almendres, a short walk away (the sites are linked by a trail). Strangely, it wasn’t until an excavation during the 1960s that the sites were actually discovered… which makes many people wonder what other treasures are lying hidden underneath Evora.

It’s completely free to visit the sites, and information is presented via various displays and at the visitor’s center (also free).

If you’re happy to splash a bit of cash, then the walking tours will give you your fill of insider knowledge, and there’s also an Interactive Museum of Megalithism just down the road the delves even deeper into the social side of these historical features – but make sure you head there during the week if you want to swing by, as it’s mainly closed at the weekend. 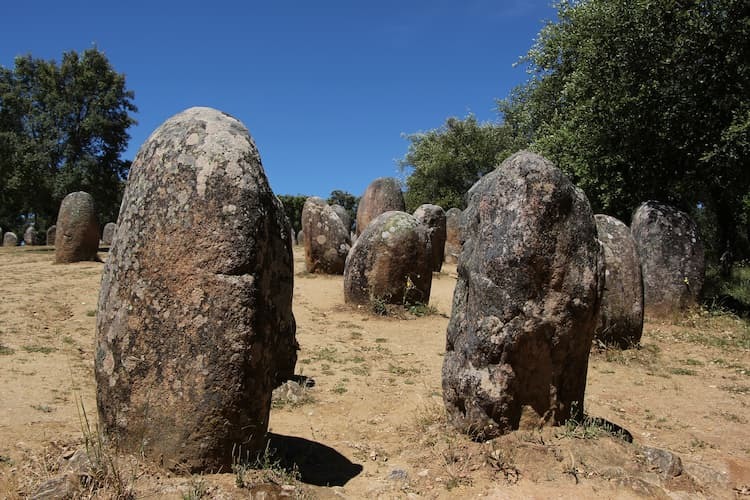 So, there you have our list of the best things to do in Evora. It really is a fascinating place and, even if you aren’t usually a history buff, the range of quirky attractions here is enough to keep anyone entertained for days. As well as the sights we’ve mentioned here, the entire city is a sight to behold.

We definitely recommend factoring in some downtime so that you can simply sit in one of the squares while appreciating the gorgeous architecture as you sip a coffee, nibble a pastry, and watch the world go by.