Roppongi at a glance

Roppongi is an entertainment district renowned for being the most popular hang out for foreigners in Tokyo and many of the restaurants, clubs, and bars in the area cater to their English-speaking clientele. Until recently, the district had a reputation as being one of the sleaziest places in Tokyo but has seen a rebirth in culture and popularity among the Japanese with the construction of Roppongi Hills, Tokyo Midtown, and several art museums. 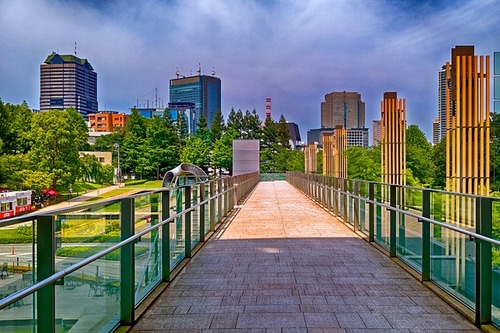 Roppongi and the surrounding area are also home to some of the most expensive hotels in Tokyo, including the Grand Hyatt Tokyo and the New Otani Hotel.

The Mori Art Museum sits on the top floor of Mori Tower in the Roppongi Hills development complex and puts on top-notch exhibitions of modern artworks borrowed from museums and galleries in Japan and abroad. Admission to the museum gives you free entry to Tokyo City View, the city’s highest observation point.

Popular Roppongi clubs include the Hard Rock Cafe and Velfarre, one of the world’s biggest dance clubs. People looking for something a little quieter can check out a movie at the Virgin Toho Cinemas.

Click on the Roppongi map for a larger image.

Roppongi is located in Tokyo’s Minato-ku, one of the city’s special wards. The name Roppongi means ‘six trees’ and supposedly is taken from the names of the six daimyo who lived in the area during the Edo period, all of whom had a kanji character for the tree in their names.

Two of the main streets that run through the area are Roppongi Dori (Roppongi Street) and Gaien Higashi Dori (Gaien Higashi Street). The most popular place to meet up with friends before a night out in Roppongi lies at the intersection of these two streets, just outside of Roppongi station – look for all the people waiting in front of a cafe with gaudy pink decor.

The beginning of Roppongi’s reputation as a neighborhood for foreigners was after World War II when the US Army and Allied forces became occupying some of the local facilities. There were also several large US military bases nearby and the area soon became packed with bars, stores, hostel clubs, restaurants, and brothels catering to the Western population.

Japan’s economy grew exponentially during the 1960’s and 70’s and more and more foreign corporations opened offices in Tokyo. Roppongi, with its comparatively foreigner-friendly services and nearby embassies, was the natural choice for many firms. Today, numerous embassies and foreign companies are housed in Roppongi and the surrounding areas, including Akasaka, Azabu, and Hiroo, and the area has a fairly sizable foreign population.

Whether you love it or hate it Roppongi is probably the most cosmopolitan place in Tokyo, or Japan for that matter. Its one of the few places where you can grab some Haitian food, hit a tequila bar, dance a little salsa, bounce to the rhythm at a hip hop club and finish the night off by singing your heart out at a karaoke club as you wait for the morning’s first train.

How to Get to Roppongi

Alternately, you can walk there from Tameike-Sanno Station or Azabu-juban Station.