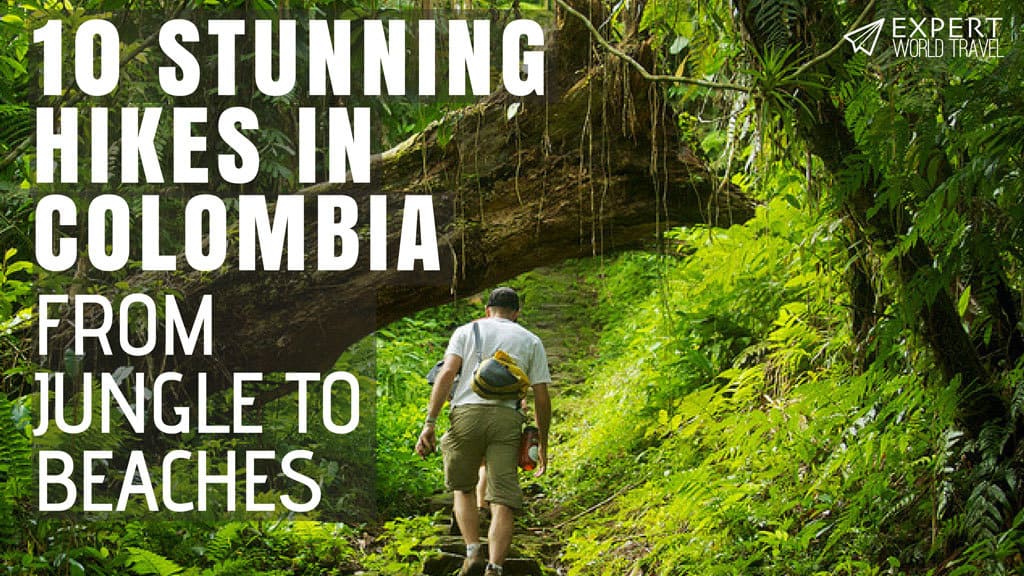 10 Best Hikes in Colombia (From Jungles To Beaches)

Colombia is famous for a lot of things.

Unfortunately, the most common that comes to mind when people picture the South America country is Pablo Escobar. However, that perception is slowly changing as the Colombian government continues to push forward its tourism initiative by making the country safer by the year.

In fact, tourism in Colombia has grown by 300% since 2006, and is definitely not near the top of most dangerous countries in South America anymore. At least in my opinion.

With that said, many of those visitors are heading to Bogota, Medellin, and Cartagena. Hiking isn’t exactly on most visitor’s radar when visiting the country.

That doesn’t mean that there aren’t some incredible hikes, because there actually are.

Here is a list of 10 of the best hikes (or treks) that you can find in Colombia right now.

1. Hike in Jardin – To the Cueva del Esplendor

Jardin is an idyllic small town a few hours outside of Medellin that typically doesn’t see a ton of tourists throughout the year.

Whether you want an easy stroll through beautiful fields or a bit more of a hike, there’s something for everyone in Jardin.

The hike (or horse ride) to the Cueva del Esplendor is one of the best hikes you can do because of the beautiful repelling, but you can also easily hike from the city into the hills to get panoramic views of the city. 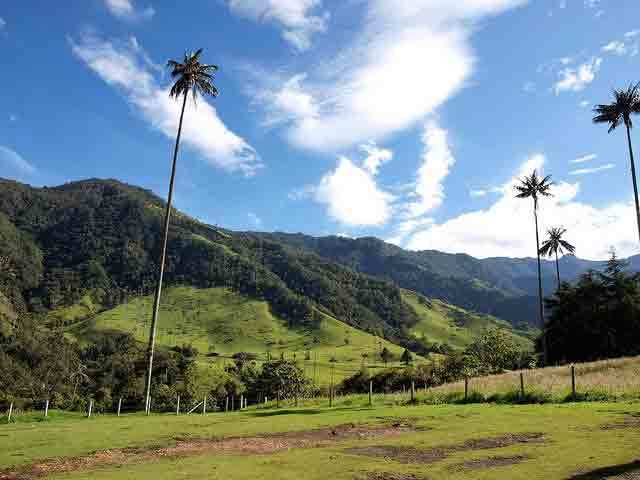 2. Salento in the Valle de Cocora

This is one of the prime spots for hiking in Colombia, and also a spot where a lot of adventure travel groups come though to give people a little adventure of course! There are plenty of options for one-day and multi-day hikes around the Valle de Cocora, and you can also do it by horseback if you want a more relaxing journey.

3. El Cocuy in the Sierra Nevadas

When most people think about Colombia, they don’t typically think about snow capped mountains.

In this beautiful national park, you hike through the Sierra Nevada mountain range. Because it isn’t really on the typical tourist itinerary, it’s likely that you’ll find some peace and quiet on this hike.

The flip side of that is that it isn’t as easy to organize as some of these other hikes. If you do decide to do it, prepare for a proper trek.

On top of that, right now it is severely limited in terms of where you can hike and how.

You will also need to have the right permits and also spend time acclimatising as hiking at over 4000m is no joke. Trust me, I did it a lot in Peru and suffered despite being prepared. So, I would hate to think how sick (or dead) you can get if you don’t take time to acclimatise. 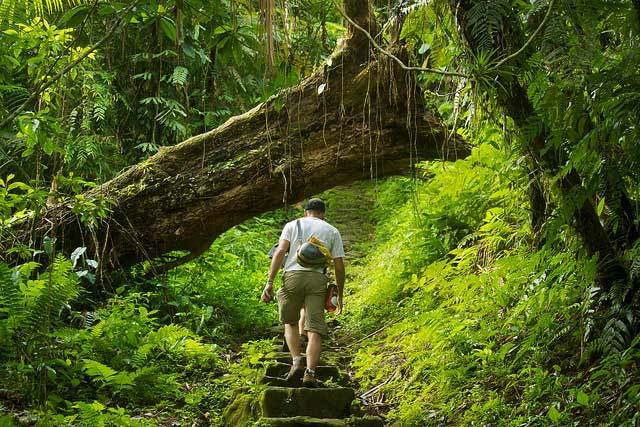 The Lost City Trek is probably the most famous trek in all of Colombia. You can think of it almost like a mini Machu Picchu.

It’s a hike through the rainforest in the Sierra Nevada de Santa Marta mountains, mostly through jungle. So, you might want to bring that kukri machete you bought but haven’t used yet!

This hike is typically done in four days and ends with a remote archaeological site that is absolutely stunning.

This trek is another that isn’t for people with zero hiking experience, so make sure that you’re prepared to rough it for a few days and wear yourself on most of those. 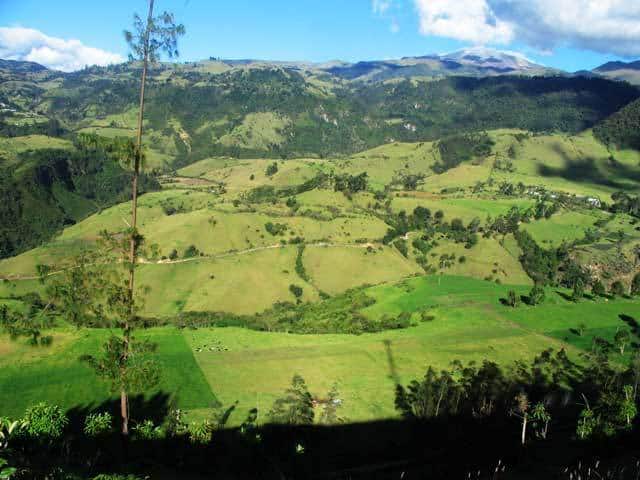 Purace National Park – By Leonardo Pupiales – Own work, CC BY 2.5,

The Puracé National Park is another destination that is a little bit off the beaten path for most tourists if you’re looking for something different.

The primary feature of the park is a beautiful andesitic stratovolcano that is the most active volcano in all of Colombia.

There were around 20 eruptions in the 20th century, with the last one coming in 1977. So, be prepared for it to happen any time, even tomorrow.

You can either hike to the summit if you’re feeling adventurous or do a 15 km hike around the volcano.

Although Parque Arvi is probably the most common choice for hiking in Medellin, the hike to Arenales Waterfall is perfect for those who have a little bit more time in Medellin than the typical tourist.

The winding path is a pretty moderate hike that takes you through a creek and over some rocks, and the waterfall at the end of the hike is a perfect spot for a picnic.

This hike is a great half-day trip. 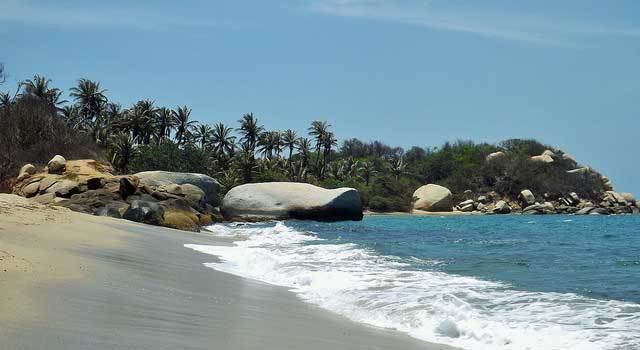 Tayrona National Park is one of the more popular destinations for tourists because of its immense national beauty. Be sure to figure out your accommodation in Tayrona ahead of time as often the best places get booked out fast.

Located on the Caribbean coast, you can lay on beautiful beaches after hiking around the rainforest in the hillsides of the Sierra Nevada de Santa Marta.

Tayrona is also located very near to Minca, another popular area for people looking for beautiful hikes.

Tayrona is typically closed for one month of the year and it seems to be (as of 2017 and 2018) from 28th January to 28th February each year. It has already ruined some of my plans to head to Colombia, so be prepared.

If you’re flying into Colombia, chances are that you’ll be in Bogota at some point.

However, you’ll probably want to get out of the city pretty quick if you’re someone who enjoys nature.

If you’re looking for an easy day trip, the hike to the La Chorrera waterfall is perfect for you. You can go from the city in the morning and be back in the evening.

The town of Mocoa is fairly far from Bogota (around 12 hours on a bus), but you can find one of the better hikes here outside of the town.

The Fin del Mundo (end of the world) hike takes visitors to a beautiful waterfall and swimming hole.

However, there was a major landslide and flood in Mocoa in early 2017, so make sure to ask around about what the town is happening locally before you head off.

The Mutis Route (La Ruta Mutis) is named after Jose Celestino Mutis, a Spanish scientist who explored the country way back in 1760 to document the various plants and animals.

You can now get a little bit off the beaten path and hike in some of the very same places that Jose Mutis hiked all those years ago.

Make Colombia Your Next Trip

Although Colombia’s reputation took quite a hit throughout its civil war, things are changing rapidly.

Much of the country is now safe for everyone to visit, and there are all kinds of beautiful hikes that you can do while you’re there.

If you get the chance, be sure to give Colombia serious thought as your next destination.

Daniel Constable is the co-founder of Slight North, a travel publication taking the hassle out of planning, showing people how to leave the office behind, and proving that you can save money while doing it. 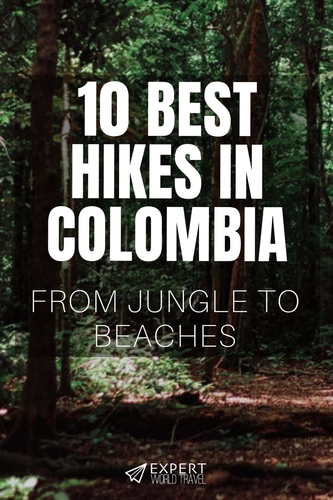