Marunouchi is a commercial and financial district located in central Tokyo, between the Tokyo Imperial Palace and Tokyo Station. The district is the largest office area in Japan and many of the country’s biggest companies are either based or have their Tokyo office there. Marunouchi has an especially high concentration of international and national financial institution headquarters, including Japan’s three largest banks. 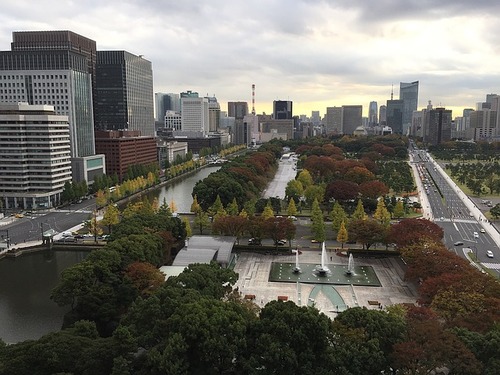 Marunouchi used to be an inlet of Edo Bay (Tokyo Bay), but was filled in when Edo Castle was expanded in 1592. After taking control of Japan, Ieyasu Tokugawa made all daimyo in the country spend every other year in the capital, Edo (Tokyo). They built their estates inside the castle walls but were eventually sent home after the Tokugawa government was defeated during the Meiji Restoration. The name Marunouchi means ‘within the (castle) walls’.

Over the past several years, Marunouchi has been undergoing a redevelopment plan to replace older buildings with modern ones, including some of Tokyo’s ritziest hotels.

Marunouchi is located in central Tokyo. It is bordered by the Tokyo Imperial Palace on the west, Tokyo Station on the east, Otemachi in the north, and Hibiya Park in the south. Recent additions include the Tokyo International Forum, Shin Marunouchi (New Marunouchi) Building, Marunouchi Oazo, and TOKIA. It is also home to the Marunouchi Building, which is said to sit atop the most expensive real estate in Tokyo – the land was valued at 21 million yen ($200,000) per square meter in 2004.

The area is also home to some of Tokyo’s fanciest hotels, including the Imperial Hotel, Four Seasons Hotel Tokyo at Marunouchi, and Park Hotel Tokyo.

How to get to Marunouchi

Marunouchi can be accessed via three railway stations.