Harajuku at a glance

In addition to being a popular shopping and entertainment section of Tokyo, Harajuku is the center of the city’s outrageous teen fashion, whose Lolita Goth and cosplay styles attract professional photographers and Western tourists alike. 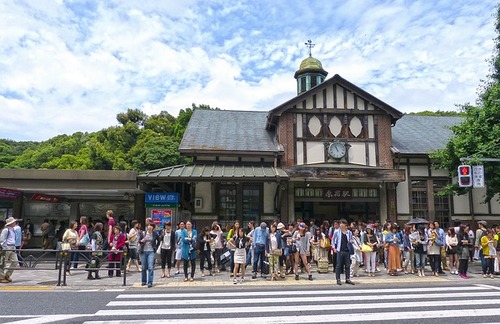 Harajuku is located in western Tokyo between Shinjuku and Shibuya, and usually refers to the area around Harajuku Station. The district’s two most popular shopping streets are Omotesando, known as Tokyo’s Champs-Élysées with its upscale boutiques and cafes, and Takeshita Dori (Takeshita Street), where youth fashion and costume culture converge. For more upmarket shopping, Aoyama’s stylish and expensive stores lay at the end of Omotesando.

Over the years, Harajuku has become most famous for its youth culture. The area first became a focal point for Tokyo teenagers in the 1980’s when they gathered on Sundays around Yoyogi Park, where the area was closed to traffic. Although the streets were reopened to traffic in the 1990’s, teens continue to hang out on Jingu Bridge across the tracks from Harajuku Station.

“Harajuku Girls” generally refers to teenagers in the Harajuku area who dress in any of the local fashions, the most famous of which are Gothic Lolita (Goth Loli), Kogal, Gyaru, and Ganguro. Taken from the English words ‘costume’ and ‘play’, cosplay refers to dressing up in a costume and role-playing as a character, often from anime, manga, bands, or movies.

The cosplayers who gather in Harajuku are called the Cosplay Tribe, kosupure zoku in Japanese, and have begun to rival nearby landmarks as one of the area’s top tourist attractions.

Be sure to go on a Sunday if you want to catch a glimpse of the Harajuku Girls fashion or, better yet, bring your camera and get some shots of all the westerners gawking and taking pictures.

How to Get to Harajuku

The most convenient way to get to Harajuku is by taking the JR Yamanote Line to Harajuku Station.

Tokyo Metro’s Fukutoshin Line is scheduled to open in June of 2008 and will connect Meiji-jingu-mae Station with Shinjuku and Ikebukuro.

You can also walk to Harajuku from Shibuya by following the train tracks along Koen Dori (Koen Street) from the Hachiko Statue. It takes about 15 minutes.