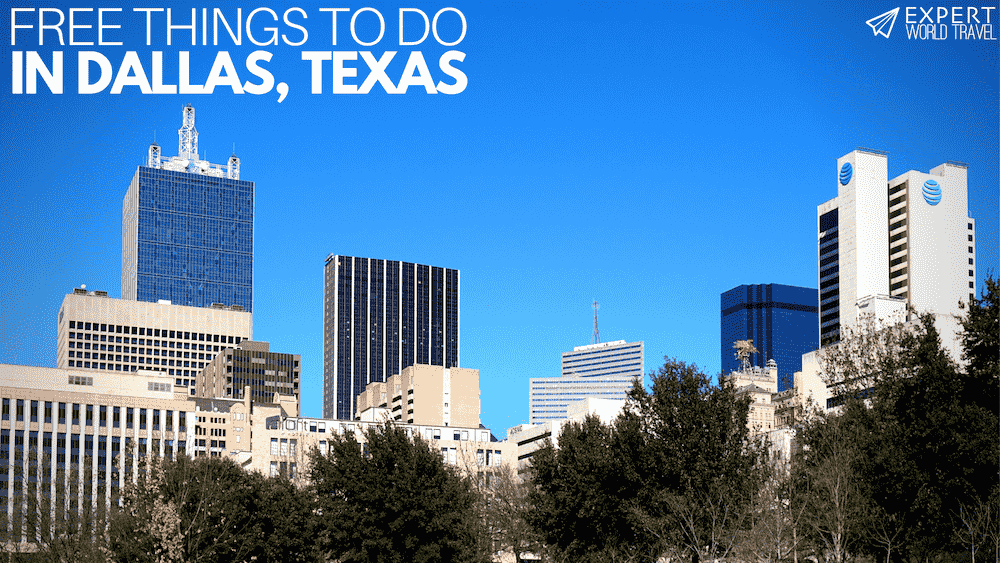 Free Things to do in Dallas

As the third-largest state in the U.S., Dallas, Texas has a treasure trove of things to see and do. And despite its reputation for big steaks, cowboys, and honky-tonks, lots of attractions showcase the state’s history and unique culture. Best of all, lots of these attractions are absolutely free to the public.

If Dallas is on your destination list, you’ll want to check out this list of free things to do in Dallas. Use the money you save on a big steak at a honky-tonk with the local cowboys or at one of Dallas’ upscale restaurants.

The Dallas Museum of Art is a world-class museum that is always free to tour except for certain exhibitions. The 370,00-square foot museum offers one of the nation’s largest and most impressive collections of ancient and contemporary art dating from the third millennium BC to modern works.

Overall, the museum holds 23,000 works of art including paintings, sculptures, jewelry, and artifacts from around the world. Beyond the galleries, you’ll find a sculpture garden, a children’s creation zone, and a cafe with a window featuring Dale Chihuly’s glass flowers.

Pay your respects to one of America’s most famous and favorite presidents at the John F. Kennedy Memorial. Designed by architect Phillip Johnson, a Kennedy family friend, the monument is a cenotaph or open tomb. The roofless monument with its sky view evokes the freedom the 35th president epitomized.

Kennedy was assassinated in November 1963 while riding in a motorcade on the nearby streets. The fatal shots were fired by Lee Harvey Oswald from a nearby book depository. The monument was erected in 1970 in the downtown historic district. The memorial is 200 yards from the site of the assassination, now a tiny park know as Dealey Plaza.

The Crow Collection of Asian Art is another impressive museum with free admission. Located in the Dallas Art District, the small yet fascinating museum lets visitors follow a course through a collection of artworks and sculptures from Japan, China, Southeast Asia, and India dating from 3500 BC to the 20th century.

Many of the works are from the private collection of Trammel Crow, a local real estate mogul. Some of the paintings objects d’art, scrolls, and archeological artifacts dating back to the 10th century. Other highlights to see include an Edo period suit of Samurai armor and a collection of Chinese jade.

In addition to free admission, visitors can park in the center’s parking lot for $4 per hour or a flat rate of $5 on weekends. You can also get there via the free McKinney Avenue Trolley. 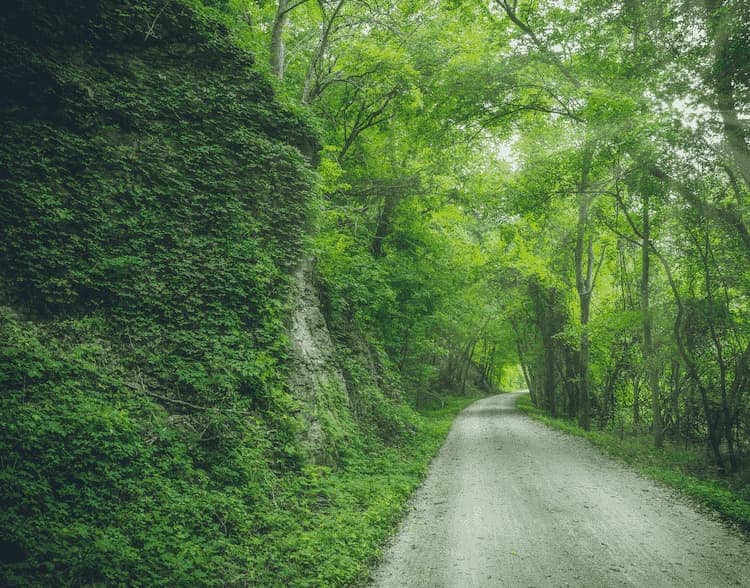 You won’t find any peaks and valleys to hike in the Dallas area, but the free Katy Trail for walkers, joggers, and cyclers passes through stunning tree-lined neighborhoods with a rural feel. In early spring, the area is ablaze with Texas redbud trees. Built over a former railroad, the 3.5 urban trail links the business district with homes, shopping, and recreation.

The route runs between the West End and the American Airlines center through the Oaklawn and Uptown areas of Dallas. The trail features plazas, water fountains, lookout points, mile markers, and night lighting. Since it’s considered a city park, the trail is open from 5 a.m. to midnight. Dogs are welcome.

Hang out for free at Klyde Warren Park, a 5.2-acre green space built over an old freeway with a view of the Dallas skyline. This community gathering spot welcomes out-of-town visitors with a butterfly garden, musical performances, and food trucks.

The park also has an area for yoga, croquet, chess, and many other activities. The kids will enjoy playgrounds, a splash pad, and a water fountain.   Year-round programs range from daily fitness sessions to film screenings. You can also park for free off McKinney Avenue in the West Village and take the free trolley to the park.

What used to be a viaduct for vehicles between West Dallas and Downtown is now a pedestrian-only bridge spanning a little more than a mile over the Trinity River. Renamed from the Continental Avenue Bridge in 2016 to honor the city’s first African-American mayor,  Ronald Kirk, the reimagined green space adds to the Klyde Warren Park.

It features a human-sized chessboard, shaded lounge chairs, playgrounds, gardens, water play, and more. It’s also a good place for views of the Downtown Dallas skyline and the Margaret Hill Bridge designed by Spanish architect Santiago Calatrava. Be sure to check out the night views. Park for free in the lot located at 109 109 Continental off Canada Drive.

Contrary to popular belief, the topography around Dallas isn’t all flat. Sitting at an elevation of 755 feet above sea level, the Cedar Ridge Nature Preserve is a 600-acre lush paradise just 20 minutes south of downtown. It features a variety of unpaved hiking trails over nine miles through woodsy native foliage filled with wildlife, butterfly gardens, and a picnic area.

Take the Escarpment trail to the Dalla/Fort Worth area’s highest point for a bird’s eye view. Although a visit to the nature preserve is free, a donation of $3 dropped in the donation box on the main trail is greatly appreciated. The preserve is closed on Mondays. No bikes are allowed, but leashed dogs are welcome. 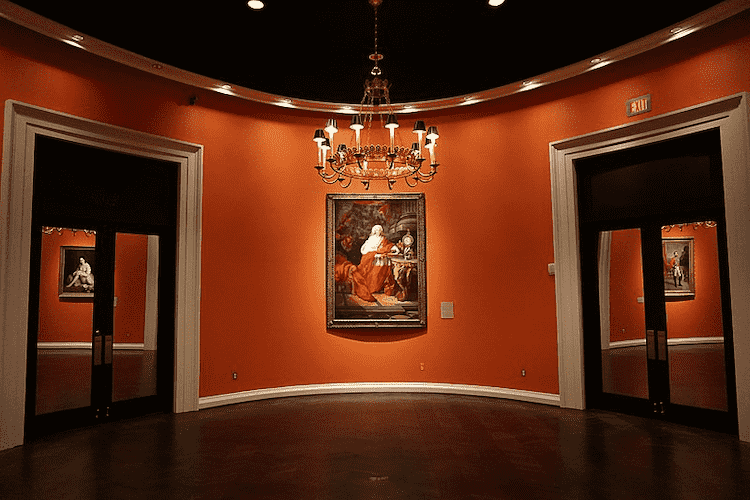 The highly-regarded Meadows Museum is free to browse on Thursdays after 5 p.m. It’s one of the largest and most notable Spanish art collections outside of Spain. Located on the Southern Methodist University campus, it’s been nicknamed “the Prado on the Prairie.” Oil sketches, wood sculptures, and Baroque style canvases span from the 10th century to the present day.

Collections are both permanent and temporary and include works by masters such as Picasso, Dalí, El Greco, Velázquez, and Miró along with a collection of 29th-century sculptures. Santiago Calatrava’s Wave is on display at the museum’s outdoor plaza. Admission is always free for children under the age of 12.

Even though swimming isn’t allowed, White Rock Lake is still one of Dallas’ most popular free things to do with over a million visitors to the urban lake every year. The natural area covers over 1,000 acres and affords a variety of activities such as biking, picnicking, fishing, kayaking, stand-up paddleboarding, and bird-watching. Several special events and runs are hosted year year-round.

The surrounding park has amenities such as picnic areas, dog parks, a museum, the Dallas Arboretum, and hiking and biking trails. Pack a lunch and spend the day at White Rock Lake.

Thanks-Giving Square was dedicated in 1976 as a place for reflection, gratitude, and appreciation for diversity within the Dallas community. The quiet park, with its chapel building and landscaped gardens, is located in the heart of downtown and is always free to visit.

Explore the iconic spiral tower and admire the stained glass window. Called the Glory Window, it’s one of the world’s largest horizontally-mounted stained glass windows and was designed by French artist Gabriel Loire. A self-guided tour with nine waypoints chronicles the story of the park’s history, symbolism, art, and architecture.

There is a slot inside the chapel or at the Ervay Street door to leave a donation.

Who can turn down a free margarita? The Ritz-Carlton in Uptown Dallas is a luxury hotel recognized as a 5-star hotel by Forbes Travel Guide. Anyone and everyone can get free guacamole and chips along with a mini margarita every evening at 6 o’clock. More than that, the free McKinney Avenue Trolley will drop you off and pick you up. After your free little guacamole feast, head north for more dining and entertainment. 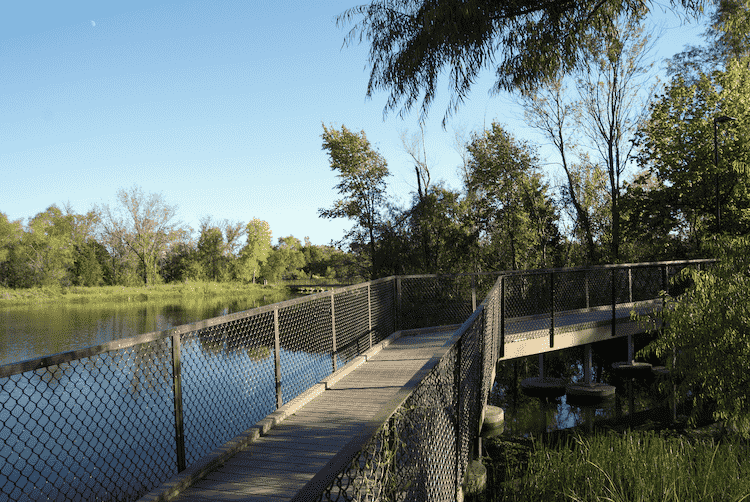 Dallas is a huge metropolis, but you’ll feel far away from the hustle and bustle at the free Trinity River Audobon Center while only being 10 miles south of the city. The center is a gateway to the amazing 6,000-acre Great Trinity Forest, the nation’s largest urban hardwood forest.

Explore the diverse plant and animal life of the forest, wetlands, and prairie habitats at the center’s 130 acres. Built on an old illegal dumping site, the center is a reclaimed haven for wildlife.

A non-profit organization, the center is part of the Dallas-Trinity River Corridor Project and the National Audobon Society. It is partially funded by the City of Dallas Park and Recreation Department.

The Amon Carter Museum is a free art museum that primarily focuses on the Old West time period in American history. The story of the settlement of North America is told through paintings, photographs, prints, and other artifacts. Much of the artwork on display was created by Charles M. Russell and Frederic Remington, well-known for their illustrations of the Old West.

The works of art closely resemble perceptions of the frontier experience. The museum is closed on Mondays and opening times vary from day to day, but admission is free for all ages.

The African American Museum is a part of the free admission to Fair Park, home to the Texas State Fair and the landmark Cotton Bowl Stadium. One of a kind in the U.S. Southwest, the museum focuses on African American history, culture, and art. In fact, it holds one of the largest collections of African American folk art in the country.

Additionally, there is an on-site theater with libraries, galleries, and classrooms for education programs. Some of the featured artists include John T. Biggers, Jacob Lawrence, Benny Andrews, and Arthello Beck.

You can’t leave Dallas without visiting a saloon to sling back a few and listen to live country music. Located in the vibrant Deep Ellum entertainment district, Adair’s Saloon has legendary burgers, cheap drinks, and country bands every night of the week with nary a cover charge. And not just any music.

This eating, drinking, and entertainment venue brings in the cream of the crop of Indie bands and from time to time, famous headliners like the Chicks, (formerly the Dixie Chicks, who recently voluntarily dropped “Dixie” from their name), Jack Ingram, and Miranda Lambert. Try to make their popular happy hour from 2-8 p.m. Sunday through Friday.