Colorado has four major US national parks and at least ten times as many smaller state parks and national park services. With so many hidden gems, vast expanses of spectacular nature, it’s not always easy to figure out which NPs are skippable, and which are a must-see. That’s exactly where we come in!

The Major US National Parks

Colorado is the fourth state with the most national parks in the United States, with four major US National Parks. I’ll tell you about each of them below, and then we’ll go through the smaller state parks that are also beautiful and worth visiting. 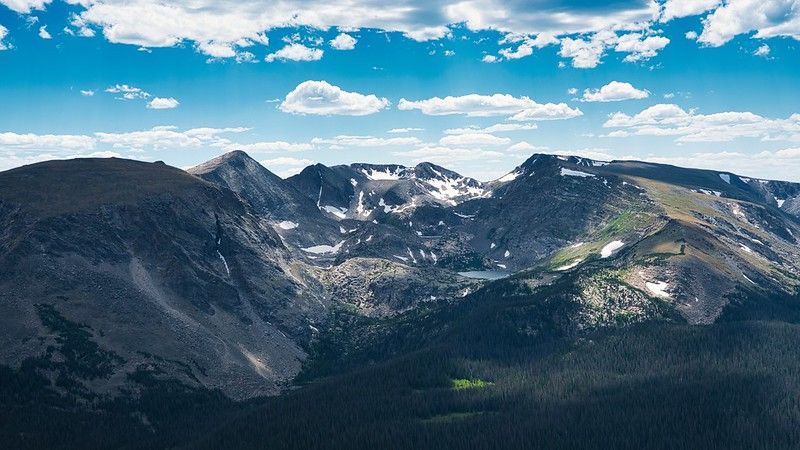 Rocky Mountain National Park is the most popular national park in Colorado. It is only about 76 miles north of Denver, and it’s really easy to reach for people who are coming out of state.

The NP spans 265,461 acres, with five regions that each have specific characteristics. Region 1 is in the west, and it’s known for moose and big meadows. Region 2 is an Alpine region characterized by high elevation, tundra trails, and spectacular views of the Continental Divide. Some 30 miles of the Continental Divide Trail pass through this region of the park, so don’t be surprised to see some determined (and exhausted) hikers here! 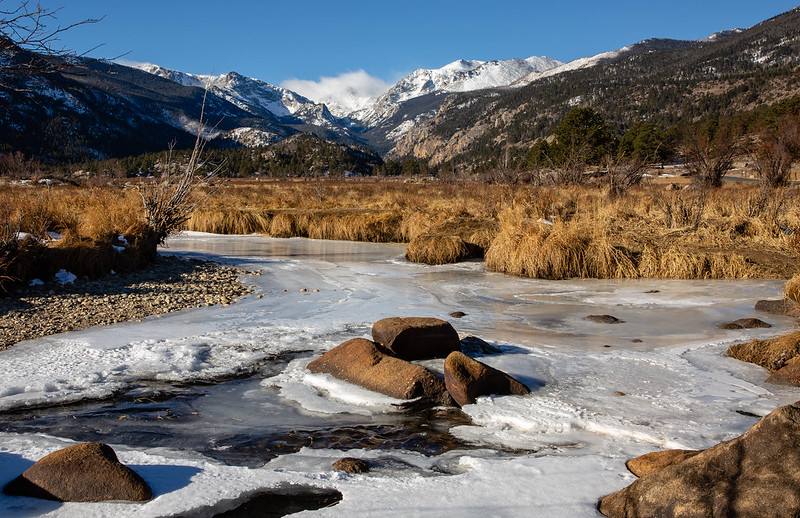 Region 3 is wilderness with tall trees and spectacular mountain views. Most of the landscape here looks like a Bob Ross painting, so visit this part of the park for scenic vistas. The very heart of the park is Region 4, with the famous Bear Lake that’s the trailhead for quite a few different hikes. And there’s Region 5, characterized by waterfalls and backcountry. This part of the park is best known for the Wild Basin and Longs Peak – the latter is one of the tallest peaks in the state, with a total elevation of more than 14,000 feet.

Rocky Mountain National Park features the Rockies, rivers, mountains, lakes, countless hiking trails, and spectacular views all around. It’s popular with campers, and people usually stay 2-3 days in this park – this is enough time to see all the highlights of the NP, but short enough that you won’t get bored by the pretty views. 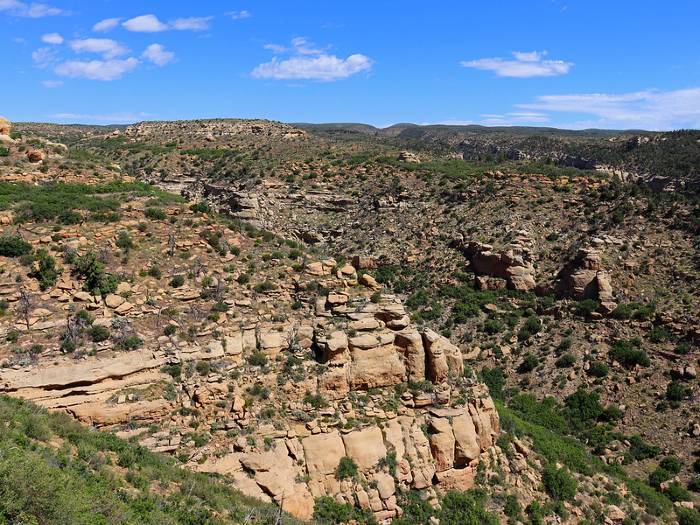 Mesa Verde National Park is in Montezuma County, and it features well-preserved Ancestral Puebloan archaeological sites. This is the fifth and final NP established by Theodore Roosevelt, and it is one of the oldest national parks in the country.

With more than 4,500 archaeological sites in the park, exploring Mesa Verde NP will make you feel like Indiana Jones for a while – just don’t forget the hat and the whip! The ancient cliff dwellings are absolutely a phenomenal sight – they were built by Ancestral Puebloans in the 12th and 13th centuries. You can walk around them and learn a lot about the lives of this ancient community. 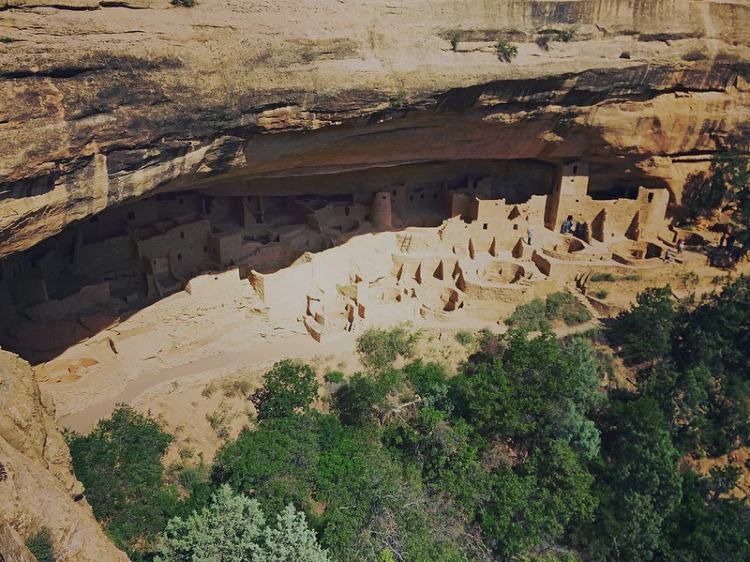 Just keep in mind that they are cliff dwellings – named for being built into cliffsides, so they’re not exactly easily accessible. There’s a lot of stairs to climb, some really steep ladders, and rock climbing as well. On the other hand, because these buildings are on such high elevations, the views of the rest of the NP are spectacular.

This national park also features numerous hiking trails, plenty of lookout points, and loads of tall peaks. I’d also recommend you stop by the Chapin Mesa Archaeological Museum, for even more insights into the lives of the ancient community.

Great Sand Dunes National Park is such a big contrast from the other NPs in Colorado. Whereas those feature spectacular mountains, lakes, rivers, and forests, this NP is just a massive desert with a mountainous landscape on the edges. The sand dunes here are the tallest in all of North America, and they’re quite a staggering sight.

This national park is popular with hikers and backpackers, thanks to the abundance of hiking trails in the NP. Keep in mind that hiking in the desert is no joke – there’s no shade, the terrain is a nightmare if you don’t have the right shoes, and water sources along the way are most likely just a mirage. Medano Creek is a rare body of water in the park, but it’s extremely shallow.

It’s also possible to try sandboarding and sand sledding in this national park, but it’s a bring-your-own-gear kind of deal. In general, a trip to this national park can last a few hours if you just want to see some sand dunes, or a few days, if you’re into hiking the dunes. There aren’t that many different things to keep you entertained in this NP, and if you’re not interested in hiking or backpacking, there’s really no reason to camp here. 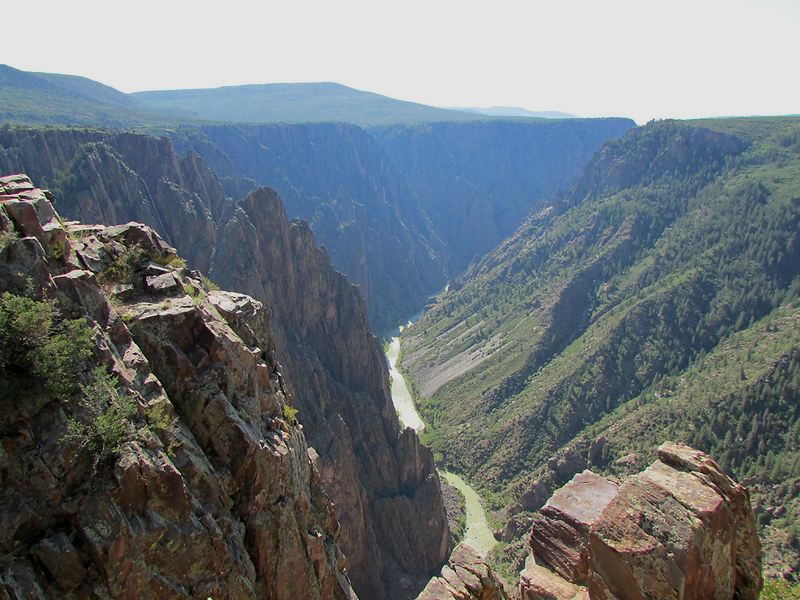 Black Canyon of the Gunnison National Park is perhaps the most scenic of all the major national parks, thanks to the Black Canyon. The tall and narrow canyon is mesmerizing, and it’s easy to spend hours just admiring the spectacular views.

Avid hikers will really enjoy a trip to this national park, thanks to the abundance of hiking trails. There are some amazing trails on both the North and the South Rim of the canyon, but you will need a wilderness permit to go hiking in the NP. Hikers without a permit can be fined, and you’ll want to get yours as soon as you arrive at the park since their availability is limited. 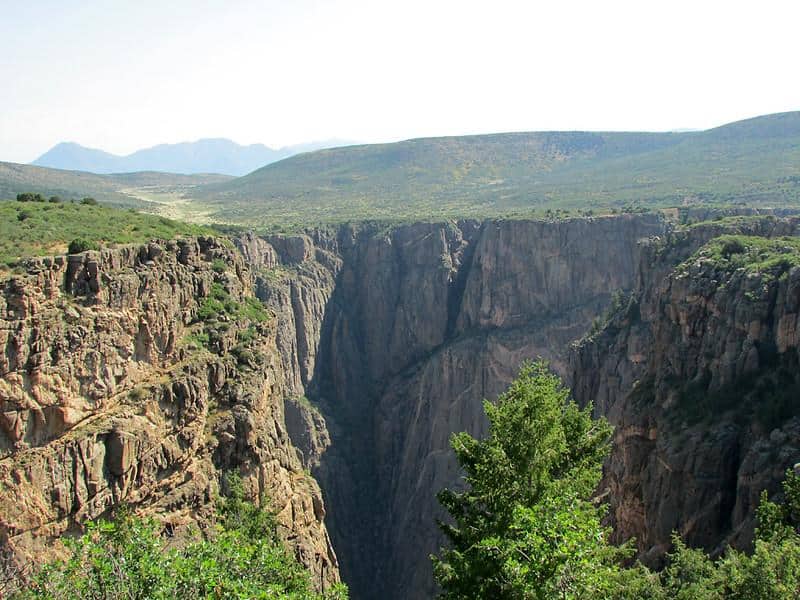 Trails in the park range from an easy walk to demanding hikes on narrow cliffs, so there’s something for everyone. Whether you’re looking to just enjoy some views, or you want a proper challenge, this NP does not disappoint! There are also plenty of opportunities for climbing, and most of them take you to a lookout point.

On top of that, Black Canyon of the Gunnison National Park is also popular for kayaking. But even expert kayakers find it challenging to navigate the narrow waters of Gunnison River, so it’s something only people with a lot of experience should attempt. The rapids are rated as Class V, some sections are unrunnable, and there’s quite a lot of technical paddling to be done. Swimming in the river is not recommended because the water temperature is below 50 degrees Fahrenheit throughout the year.

We’ve covered all four major national parks in the state, so let’s move on to the smaller State Parks. They’re not to be easily dismissed – some of these are even more popular than the massive NPs due to unique scenery, flora, and fauna! 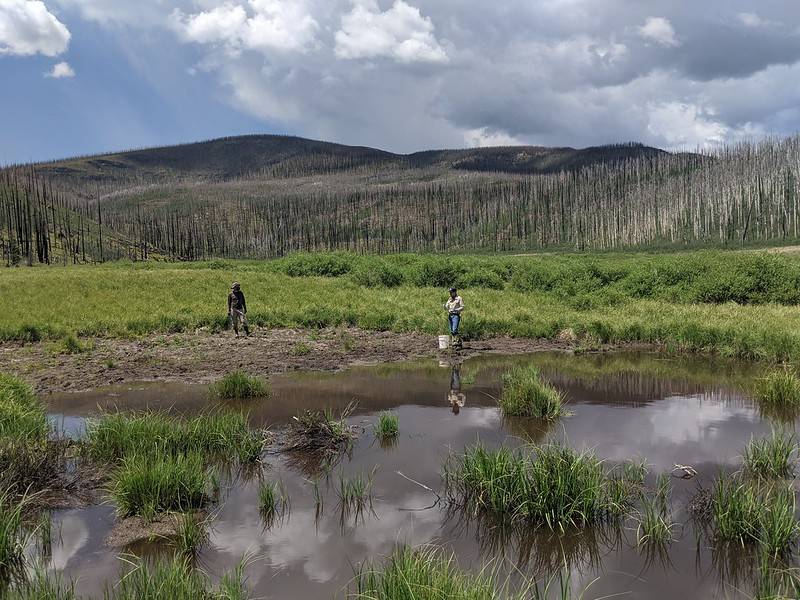 Rio Grande National Forest encompasses 1.86 million acres in the southwest of Colorado, and a part of it stretches into the Great Sand Dunes National Park. The National Forest is popular with hikers and campers, thanks to the abundance of different campsites and hiking trails in the forest. Whether you’re looking to do a short and sweet hike or embark upon a multi-day adventure, there are at least a dozen different trails to choose from.

Additionally, the National Forest is home to quite a lot of tall mountain peaks, so there are ample climbing opportunities for avid alpinists!

The varied landscape of Rio Grande National Forest means you’ll rarely get bored by the views in front of you. There are waterfalls, rivers, lakes, tall mountain peaks, and vast plains, so it’s really easy to enjoy yourself. 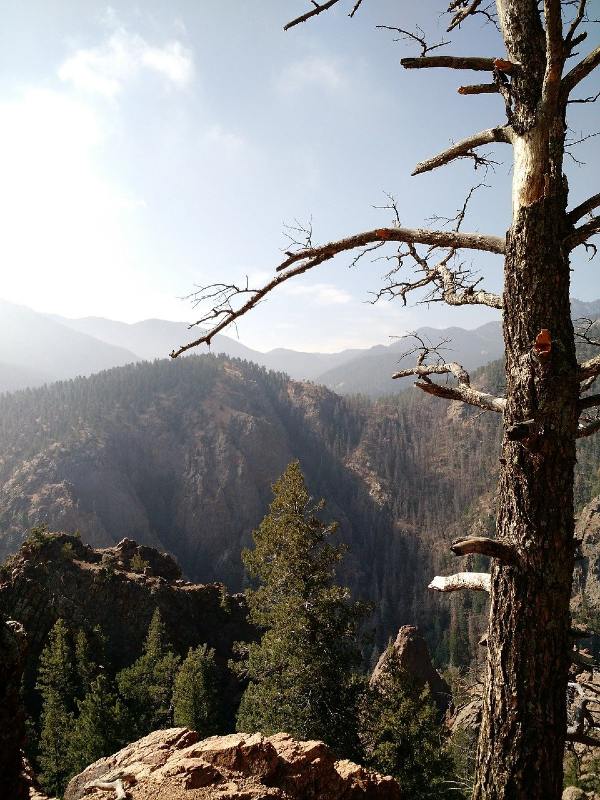 Cheyenne Mountain State Park is one the best place for campers in Colorado with more than 50 different campsites throughout the State Park. There are also some 28 miles of hiking and cycling trails, as well as dedicated trails for horse riding and dog-walking.

The State Park is a great place for families with children, thanks to all the different playgrounds and picnic areas throughout the park.

Also, hikers looking for a challenge will not be disappointed with this state park. Perhaps the most difficult hike is the ascent to the peaks of Cheyenne Mountain – the 9,570-ft tall mountain features three peaks and two forested areas, with waterfalls and spectacular views along the trails. 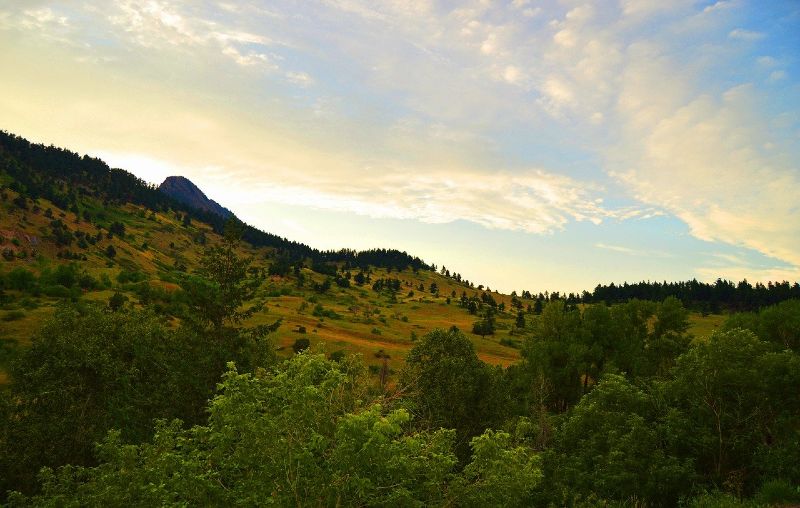 Eldorado Canyon State Park is south of Boulder, and it’s the best place in the state – and wider – for rock climbing enthusiasts. The state park is home to some of the most comprehensive rock climbing areas in the world, with climbs that are suitable for both beginners and seasoned professionals. This is where American rock climbing was born, and the tall cliffs of the park have attracted climbers from all over the world since the 1950s.

The state park is also popular for its picturesque cycling and hiking trails in the warmer months, while cross-country skiing and snowshoeing attract visitors in the winter.

One thing to note about the Eldorado Canyon State Park is that it’s only accessible to visitors during the day. You are expected to leave before dusk, so if you’d like to hike some of the longer trails, you’ll have to be at the trailhead early in the morning. 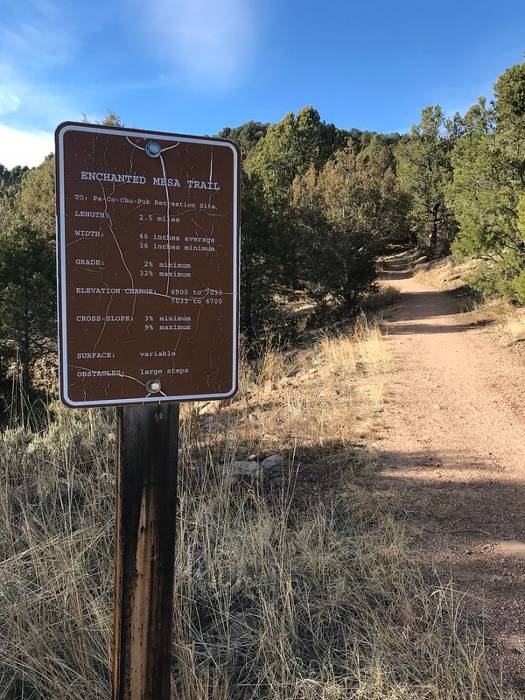 Ridgway State Park is the best place to go bird watching in Colorado. More than 140 different species were identified at the state park, including resident and migratory birds. The wilderness area features a reservoir with a swimming area, yurt camping, and diverse wildlife. This park is also popular for boating and fishing, and they ask all the anglers to keep all Smallmouth Bass they catch, as the species endangers the native fish of the Ridgway Reservoir.

The park features some seven miles of hiking trails that connect its north and south ends, with many more miles that venture outside the state park. Hiking trails in the park range from easily accessible concrete trails to challenging mountaintop ascents suitable only for experienced hikers.

The beautiful reservoir is the main attraction of this state park, allowing for all sorts of water fun in the summer. Whether you want to go swimming, water skiing, windsurfing, or paddleboarding, you can do so at Ridgway State Park. And with more than 87 picnic areas throughout the state park, there’s plenty of opportunities to rest and recharge after all those water activities. 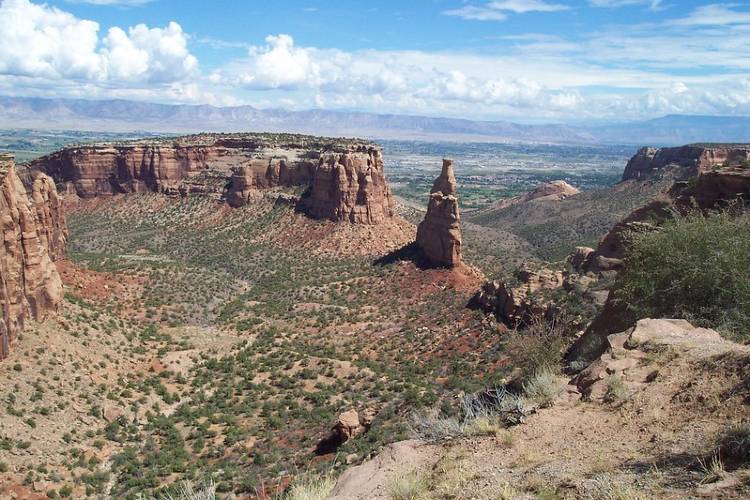 Colorado National Monument features some impressive canyon views in the far west of the state. It’s home to the largest flattop mountain in the world, Grand Mesa, which you can ascend via one of the countless nearby hiking trails.

This park is popular for horse riding, hiking, mountain biking, and even just scenic driving, so there’s a multitude of things you can do to have a good time.

The main attraction of the park is the Monument Canyon, which runs along the entire width of the park, with some truly outstanding rock formations. Whether you just want to be wowed by nature, or you’re looking for a challenging MTB trail, Colorado National Monument is certainly one of the best national parks in Colorado for you! 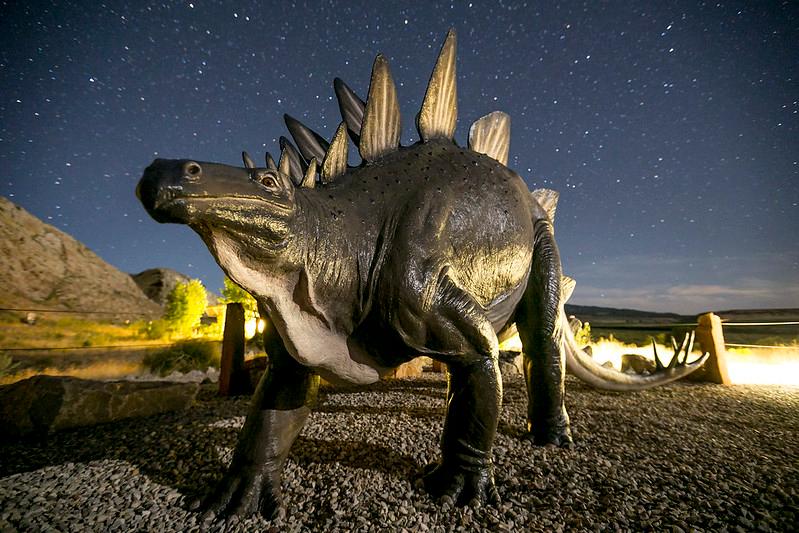 Dinosaur National Monument is the best place to take your kids who are obsessed with dinosaurs. Not only does it feature huge dinosaur statues throughout the park, but there are also dinosaur fossils in the cliffs.

It’s worth noting that this national park stretches over both Colorado and Utah, and some of the fossil cliffs are actually in Utah. Some of the hiking and cycling trails take you across the state border, but that’s a compromise you have to make if you want to see fossilized dinosaur legs.

On top of that, Buena Vista Peak is just south of the national park, and I highly recommend climbing to the top of the mountain. It’s a 2-mile out-and-back trail that offers incredibly stunning views of the Redwood Canyon, Sierra Crest summits, and Kings Canyon. Plus, there are beautiful wildflowers all over the trail, which make the landscape look even more breathtaking.