10 Temples And Shrines To Visit In Tokyo

Wondering which temples in Tokyo are actually worth visiting? It can be hard to choose the best shrines in Tokyo, Japan, considering how many of these are in this stunning city!

Since the definition of a temple is a building reserved for religious or spiritual rituals, we’re also including some Shinto shrines in this list. Even though they are not called temples, that doesn’t mean that that’s not the function of these beautiful buildings!

So, this will be a complete list of shrines and temples you should visit while you are here.

If you want to know what other places you should visit in this amazing city, check out our detailed 10-day Japan itinerary!

One obvious fact about Tokyo is that it is a very large city. So,  most of these Buddhist temples are not going to be that close by. So, if you want to see all the 10 best temples in Tokyo, you will need to ride the trains frequently.

If you also plan on visiting other cities in Japan, I highly recommend you get the Japan Railway Pass – it gives you unlimited access to JR trains for at least 7 days. This is perfect for exploring the country, and also for riding around larger cities like Tokyo.

If you are just staying in Tokyo, then you will be fine riding the trams, subway, trains or buses.

How’s your New Year’s Eve recovery going? Did you party into the new decade? NYE in Japan is extremely quiet, in what is an already quiet country, since loud noise is particularly discouraged that evening. No fireworks, noisemakers, or street parties for that matter. The Japanese are MUCH more focused on New Year’s Day, THE most important holiday of their year. Nearly every business is closed and every employee off. Firsts are important to them so people prepare to rise before dawn to see the first sunrise (Hatsuhinode) and pack the shrines (Hatsumode) for good fortune and spiritual blessings. I loved experiencing this significant cultural difference. Celebrating differences is one of the great joys of travel! Where do you fall on the NYE spectrum? Would you prefer to stay up celebrating into the new year? Or quietly close it out so that you can contemplatively rise before the sun comes up? #newyearstradition #tokyotrip2019 #sensojitemple #exploringtheworldtogether #celebratingourdifferences

The Tokyo Senso Ji temple is definitely Tokyo’s most iconic Buddhist temple. It is located in Asakusa, and it is fairly close Asakusa’s main train station, so it should be pretty easy to find.

This is the oldest temple in Tokyo, which is why it is so special. It used to be associated with the Tendai sect of Buddhism, but became independent after World War II. And it is very famous for the five-storey pagoda that’s just next to the temple.

Oh, and there are several Shinto shrines next to this temple, so you will get to see quite a lot of sacred buildings. Asakusa Shrine in particular is stunning, and definitely snap a photo of the Hōzōmon Gate – the larger of the two gates that ultimately lead to Senso ji.

Meiji Jingu is Tokyo’s most famous Shinto shrine, and it is located in Shibuya city. The shrine is dedicated to the deified spirits of Emperor Meiji (hence the name), and his wife Empress Shōken. But the shrine doesn’t contain the grave of the emperor – that is located south of Kyoto, at Fushimi-momoyama.

This Tokyo shrine is particularly popular for its surroundings – it is surrounded by forest, in the middle of this busy city. Even the path to the shrine is lined with trees and gorgeous nature. And Meiji Jingu is famous for its amazing iris garden, which is seasonal.

The closest train station to this Tokyo shrine is Harajuku – from there, it’s just a 10-15 minute walk through the forest.

Yasukuni Shrine is another popular attraction in Tokyo. It is located in Chiyoda, not far from the Imperial Palace, and it is surrounded by several other Shinto shrines.

But the most important one, The Imperial Shrine of Yasukuni, is dedicated to people who died during the wars in the  Meiji and Taishō periods, as well as a smaller part of the  Shōwa period. The shrine was originally founded by Emperor Meiji, in order to commemorate everyone who died in service of Japan, from the Boshin war through the First Indochina War.

Nowadays, the Yasukuni shrine commemorates nearly 2,5 million men, women, children and even some pets. But, there was controversy surrounding this, since 1,068 out of those names are of convicted war criminals.

The Zōjōji temple is the main temple of the Jodo sect of Buddhism. It is right next to the Tokyo Tower, in Minato City. The temple is actually located in Shiba Park, which is home to a few more temples, gates and various other landmarks.

The main entrance gate, Sangedatsumon, is the only building of the temple which is not a reconstruction. It was built way back in 1622, after the temple was moved to its current location. That was ordered by Tokugawa Ieyasu – he selected it as his family temple, and the mausoleum of the family can still be found in the back of the complex.

Sengaku-ji is a Sōtō Zen Buddhist temple in Tokyo’s Takanawa neighbourhood. It looks neither special nor impressive, but it is one of the most famous Buddhist temples in the city. And that’s because of the legendary historic even known as Akō incident – when 47 rōnin (samurais with no leader) avenged their master’s death.

You will also find the graves of those 47 samurai here, as well as a statue dedicated to legendary Sawaki Kōdō – a 20th century Sōtō Zen teacher and one of the most prominent Zen priests of his time.

There’s also a statue dedicated to Ōishi Kuranosuke – the leader of those 47 rōnin in their revenge.

Gōtokuji is a popular Buddhist temple from the Edo period, famous for the massive collection of lucky cat statues. And that’s because a legend cites this temple as the birthplace of the beckoning cat.  The cats are believed to bring luck and success, and you can even buy your own cat statue. Or you can buy omamori – a protection charm.

The cats are only one part of this temple. The entire complex is pretty big, and you can interact with Japanese people, and see how they used to live back in the day.

You will find the Nezu Shrine in Bunkyo ward of Tokyo. It is one of the oldest shrines in Japan, and undoubtedly one of the most beautiful. Nezu Shrine is famous for the torii Shinto gates – there are so many of them that they create a tunnel-like effect.

The pathway through this “tunnel” leads to the smaller Otome Inari Shrine and its viewing platform, which overlooks the pond below. And the “tunnel” is one of the most popular tourist attractions in the city, and a photo-op you just can’t miss.

Right next to the shrine is also an azalea garden, which looks the best in spring, when all the colorful flowers are in bloom.

Yushima Tenmangū is an ancient shrine in Tokyo’s Bunkyo City, very close to Ueno Park. It is a very peaceful and quiet shrine, devoted to Tenjin, the kami (deity) of learning. Because of that, this Shinto shrine is frequently called Yushima Tenjin.

It is a really great place to go and visit if you’re tired of Tokyo’s constant crowds – Yushima Tenmangū is rarely as busy as some more popular temples.

The shrine is pretty close to Ueno Park and Tokyo University – actually it is frequently sited by prospective students who wish to pass the entrance exam. In April particularly, the temple receives quite a lot of ema – voting tablets with which the students petition the kami for success.

Kaneiji is actually pretty close to the shrine I previously told you about – just on the other side of Ueno Park. It is a stunning Buddhist temple that dates back to early 17th century, with a 5-storey pagoda and many statues.

The temple is surrounded by trees, and cherry blossoms in particular look stunning in the spring. There is another, smaller, Buddhist temple just across from Kaneiji.

This entire area is very quiet and serene, so you should come here if you want to have some peace of mind. You can really enjoy the nature and the architecture, away from the crowds of Ueno Park.

Kanda Myoujin Shrine is the last, but definitely not the least amazing temple you should visit in Tokyo. It was founded in 730 near today’s Otemachi, and moved to its current position in 1616. It is famous for its vibrant vermillion and gold color.

The shrine is surrounded by  many beautiful statues, and there’s even a kind of souvenir shop.

What’s interesting is that Kanda Myuojin Shrine is pretty much in the middle of Akihabara – Tokyo’s central electronics district. And that also means that this particular shrine is pretty popular with tech geeks – you can actually buy talismans that bless electronic devices!

The list of shrines and temples you could visit in Tokyo is almost endless. Almost. So, I don’t want to bog you down with a huge list.

However, there is one more you might want to add. For example, the Meiji shrine in Shibuya is dedicated to the deified spirits of Emperor Meiji and although not the best on this list, is worth checking out if you are in the area.

Another one is the iconic red Kanda Shrine, also known as Kanda Myojin, which is an ancient Shinto shrine.

Pin It For Later 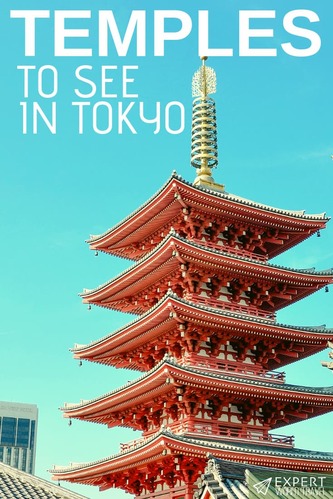 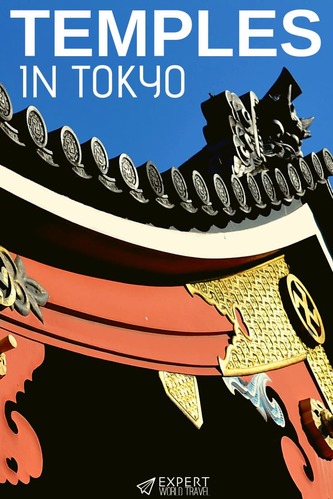