Asakusa at a glance

Asakusa lies at the heart of Edo’s old Shitamachi and was a stopover for people on their way from the city center to Yoshiwara, its infamous pleasure quarters. With so much traffic passing through the area, brothels and kabuki theaters began popping up in Asakusa and it eventually became an entertainment district itself. 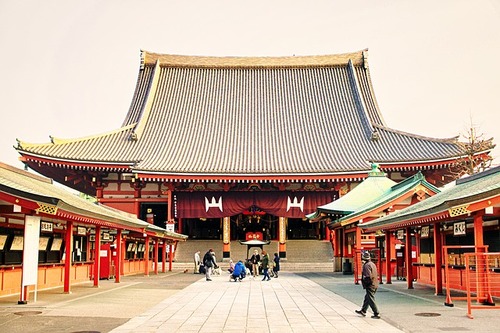 At one point, Asakusa was the city’s center of Kabuki. After Japan opened its doors to the rest of the world following the Meiji Restoration, Asakusa became the focal point for pleasures of a new kind – the country’s first movie theater, performance of a Western opera, music hall, and strip show all happened here. Although the area never returned to its former glory after World War II, Asakusa retains the atmosphere and culture of Shitamachi more than any other place in Tokyo.

Click on the Asakusa map for a larger image.

Asakusa is located along the west bank of the Sumidagawa River in northeast Tokyo. The area is filled with temples, shrines, and shopping, and is one of the few places in Tokyo that retains some of the feeling of old Tokyo.

Asakusa’s main attraction is Senso-ji Temple, also known as Asakusa Kannon-do. The temple was built in the 7th century and houses a golden image of Kannon. Legend has it that the image was found by two fishermen in the Sumidagawa River in 628, and it has supposedly been held on the spot where Senso-ji stands ever since. Although the image itself is not on display, the Buddhist temple remains one of Tokyo’s top tourist destinations. Kaminari-mon Gate at the temple’s entrance is a popular spot to take pictures.

Leading up to Senso-ji is Nakamise Dori (Nakamise Street), a shopping street lined with shops that sell everything from cheap trinkets to high quality traditional crafts. Nakamise Dori also has many booths selling fresh local snacks.

Another major attraction of Asakusa is the Sanja Matsuri, Tokyo’s biggest festival, when more that 100 mikoshi(portable shrines) are carried through the streets. The three-day festival begins on the third Friday in May.

How to get to Asakusa

Asakusa can be reached by train, subway, and boat.

Tired of Tokyo trains? Take a Suijo Bus cruise to Asakusa along the Sumidagawa River.