Thinking of visiting Kyoto, or maybe moving to one of the best places to live in Japan? Then this simple Kyoto guide is for you!

Kyoto at a glance

Kyoto was the capital of Japan and where the Emperor resided from 794 to 1868, when the imperial forces overthrew the Tokugawa Shogunate and moved the capital to Tokyo.

The city stood as the center of Japanese culture and politics for over 1,200 years and is home to some of the country’s most impressive traditional architecture, greatest works of art, and most refined cuisine. 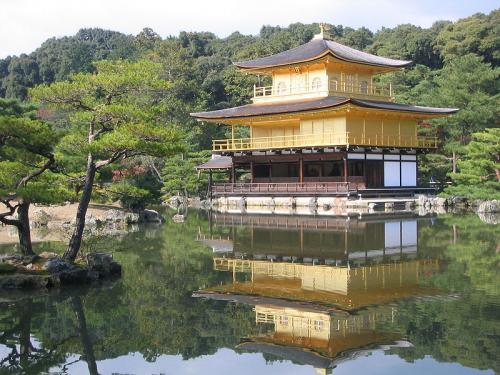 During World War II, Kyoto was on an atomic bomb list of targets but America’s Secretary of War, Henry Stimson, understood the city’s historical importance and persuaded the government to have it removed. Fortunately, it was spared from most of the bombing during World War II and many historic buildings remain today.

Kyoto is now a modern city of 1.5 million people with where shiny skyscrapers live beside its 17 Unesco World Heritage Sites, 1,600 Buddhist temples, 400 Shinto shrines, and 200 gardens. The city is also considered to be one of the best travel destinations in Japan for viewing sakura cherry blossoms when they bloom in early April.

This Kyoto travel guide has information about what to do in the city, including Kyoto temples and shrines, getting around, and how to find the best Kyoto hotel or hostel for your budget.

Kyoto is located in Kyoto Prefecture in western Honshu, Japan. It is part of the Kansai region, which also includes nearby Osaka, Kobe, and Nara. The city lies is a valley surrounded by hills on three sides and sits on a grid pattern. Unlike other cities in Japan, Kyoto has street names, and its parallel and perpendicular roads make it easy to find your way around on both foot or bicycle.

Kyoto’s primary train station, Kyoto Station, is located in the southern part of the city and is serviced by the JR and Kintetsu lines. The city center lies around Shijo Dori (Shijo Street) about 1.2 miles (2 km) north of the station.

Following Shijo Dori east over the Kamogawa River leads to Gion, Kyoto’s entertainment and geisha district. Most of Kyoto’s best sightseeing can be found at the foot of the eastern and western hills, which can be reached by bicycle or public transportation.

Kyoto is renowned for its more than 1,600 Buddhist temples. Many of the temple names end in dera, which means temple in Japanese. Others may end in ji,in, or do. Several of the most famous Kyoto temples, such as Kiyomizu-dera, Ginkaku-ji, and Nanzen-ji, are found in Higashiyama on the western side of the city. Another group are located in the northeast, including Ryoan-ji and Kinkaku-ji.

Kyoto’s more than 4,000 Shinto shrines are popular with both Japanese and foreign travelers. Shrine is pronounced ;jinja in Japanese and most of them will have the word at the end of its name. Three of the most popular shrines are Kamigamo-jinja, Shimogamo-jinja, and Ujigami-jinja.

The Imperial family lived in Kyoto for over 1,000 years and the old palace is a good place to stop early on in your trip. While the palace may not be what it once was, applications for visiting Kyoto’s stunning imperial villas and gardens must be filled out here at the Imperial Household Agency’s office.