Akihabara at a glance

Akihabara is Tokyo’s center of consumer electronics. It is located in on the eastern side of Chiyoda Ward, just five minutes by train from Tokyo Station. In recent years, Akihabara has also become the center of Japan’s otaku (obsessive fan) culture, including anime, manga, and video games. 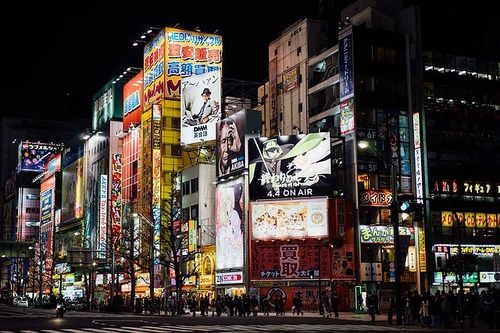 Other otaku-based fads that have taken root are maid cafes and cosplay.

The area is often referred to as Akiba (short for Akihabara) or Denki Gai (Electric Town).

Many computer stores started opening stores in Akihabara during the PC boom of the 80’s and 90’s, and otaku obsessed with computers and anime poured into the area. Japanese electronics manufacturers sometimes send prototypes of new products to Akihabara stores in order to see how popular they are with consumers there before release them into the national and international markets.

Akihabara now has over 250 electronics stores, from huge megachains to small part suppliers. Most of the shops are gathered around Akihabara Station and along Chuo Dori (Chuo Avenue), and many of the bigger ones have staff that speak English, Chinese, and Korean. Prices can vary significantly between stores and, unlike most places in Japan, are sometimes negotiable.

Many of the electronics in Akihabara are for use in Japan only and overseas shoppers should be sure to check voltage and warranty requirements before buying electronics to use at home. Duty free shopping is also available to foreigners (passport required) on purchases of more than 10,000 yen at some of the larger stores.

Yodobashi Camera is a large electronics chain based in Shinjuku. They opened up a huge branch in Akihabara with nine floors and more than 600,000 products. The store has English-speaking staff and credit cards are accepted. The store is located near Akihabara Station’s Showa Dori Exit on the JR. Yodobashi Akihabara is open daily from 9:30 am – 10:00 pm. Tel: +81-3-5209-1010.

LaOK has eight stores throughout Akihabara. LaOX Duty Free is the the main store near Akihabara Station. Shoppers interested in game and hobby related items should go to their branches in Asobit City. LaOX Duty Free is open from 10:00am to 8:00pm. Tel: +81-3-5207-5027

Akihabara has become the center of otaku culture in Tokyo and there are many shops that sell goods related to manga, anime, and video games. Another otaku-driven fad are maid cafes, where attractive Japanese women dress up in French maid outfits from popular anime and manga. Waitresses greet customers by saying ‘Welcome home, Master’ as they enter. The popularity of maid cafes has led to other types of cosplay establishments with varying of themes.