Ginza at a glance

Ginza is Tokyo’s center of brand name stores, luxury shopping, and conspicuous consumption. The district is notorious for smartly-dressed women, exorbitant real estate prices, and 1,000 yen cups of coffee. While areas like Shibuya and Shinjuku draw the young crowd, Ginza still very much belongs to adults. 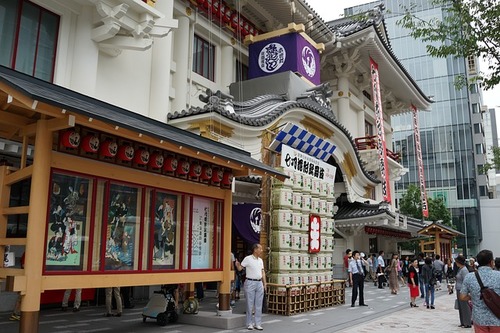 Ginza means ‘Silver mint’ in Japanese and the area is named after a silver-coin mint that was built there in 1612. After burning down in a fire in 1872, the neighborhood was reconstructed with Western-style brick buildings, a novelty for Tokyo at the time. Ginza was also home to Tokyo’s first department store as well as other Western imports. After the area was destroyed again during the Great Kanto Earthquake in 1923, it was turned into Tokyo’s first upmarket shopping center. While other areas in Tokyo now rival Ginza for popularity, it still retains its snob appeal and is a great place for window shopping and enjoying free galleries.

The best times to visit Ginza are when the main street, Chuo Dori, is closed off to vehicles from 2:00-5:00 pm on Saturday afternoons and 12:00-5:00 pm on Sundays (until 6:00 pm during the summer). Click on the Ginza map for a larger version.

Ginza is located in central Tokyo near Tokyo Station, a popular station on the Tokyo Metro and JR lines. The district is a major shopping area for upmarket goods, including expensive jewelry, brand-name clothes, and designer chocolates. The Ginza Wako clock tower was built in 1932 and lies at the intersection of Chuo Dori (Chuo Street) and Harumi Dori (Harumi Street).

Ginza attractions include the Sony Building, where visitors can test the company’s newest inventions, Kabukiza Theater, which was built in 1889 and shows kabuki plays for a very reasonable price (earphone English guides are available), and the Apple Store, whose seven floors offer the chance to play with all of Apple’s latest products.

Ginza also has some of Japan’s top department stores, such as Hankyu, Matsuya, Matsuzaka, Mitsukoshi, Seibu, and the Paris-based Printemps.

How to get to Ginza