Shinjuku is a popular business, entertainment, and shopping district in the heart of Tokyo. The area is filled with flashing neon, shiny skyscrapers, huge TV screens, expensive department stores, bargain shopping markets, and crowds and crowds of people. More than 3.5 million people pass through the doors at Shinjuku Station every day, making it the busiest in Japan and possibly the world. 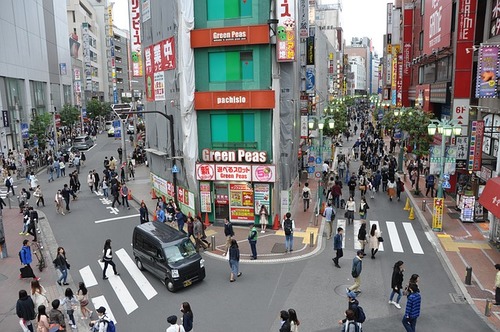 Shinjuku hotels boast some of Tokyo’s most expensive, including the Park Hyatt Tokyo (featured in Lost in Translation), Keio Plaza Hotel, Hyatt Regency Tokyo, and Four Seasons Tokyo. Click on the Shinjuku map for a larger version.

Shinjuku is located in Shinjuku-ku, one of the 23 special wards of Tokyo, but usually refers to the area around Shinjuku Station. It lies in western Tokyo near Shibuya, Harajuku, Roppongi, Omotesando, and Aoyama.Shinjuku is divided into east and west by the many railway tracks that run into Shinjuku Station.

West Shinjuku (Nishi Shinjuku) is a showcase for modern architecture and is one of the few areas in Tokyo with a high concentration of skyscrapers. The area remained largely undamaged during the Great Kanto Earthquake in 1923 and is considered to be more stable than other areas in the city.During lunchtime, West Shinjuku streets fill up with the area’s& OL (office ladies) and& sarariman (salaried company employees), and can be a great place for people-watching. The area also boasts Tokyo’s largest camera stores – Yodobashi and Sakuraya.

East Shinjuku (Higashi Shinjuku) is a shopping and nightlife center packed with bars, clubs, and restaurants. It is most famous for Kabukicho, Tokyo’s largest red-light district and the inspiration for Ridley Scott’s Blade Runner.

How to Get to Shinjuku

Shinjuku is serviced by over a dozen trains and subway lines. Most stop at JR Shinjuku Station, though some pull into other stations that are either attached or close by.