Shibuya at a glance

Shibuya is a popular shopping/entertainment section of Tokyo and is the fashion center for its under-30 crowd. One of the hippest places in the city, the area is packed with clothing boutiques specializing in new and used dress, record shops that cater to aspiring Djs and underground music enthusiasts, and monstrous five-story TV screens. When the sun goes down, young Tokyoites flock to Shibuya’s numerous restaurants and clubs. 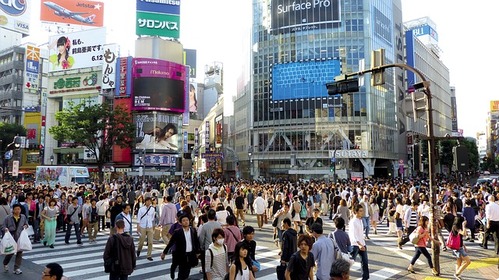 Shibuya is an important place in popular culture in Japan. The area often provides that backdrop for anime, manga, and video games, and Shibuya Kei is a genre of J-Pop that came out of the area. A popular Japanese television show, called Sh15uya, is virtual reality show about 15 year olds in Shibuya. The ubiquitous “loose socks” fashion that swept the nation is also said to have been born in Shibuya.

Click on the Shibuya map for a larger image.

Shibuya usually refers to the area around Shibuya Station. Shibuya is located in Shibuya Ward, one of the 23 designated special wards of Tokyo that also encompasses several of the city’s most popular areas and attractions, including Harajuku, Meiji Shrine, Yoyogi Park, Omotesando, Sendagaya, Ebisu, Daikanyama, and Takeshita Dori (Takeshita Street).

Shibya lies in western Tokyo, near Harajuku, Shinjuku, and Omotesando. When Shibuya became known as the center of Japan’s IT industry at the end of the 1990’s some people began calling it Bit Valley, which is a play on the literal translation of the kanji for Shibuya – Bitter Valley.

Shibuya Crossing, located in from of Shibuya Station’s Hachiko Exit, is the four-way intersection with the large TV shown in almost every movie that takes place in Tokyo. Every day thousands of pedestrians stop and go to the beat of the street light and the crossing is reportedly one of the busiest and most recognizable intersections in the world. Even with all of Shibya’s day-time activity, however, it is not until evening when the pulsating neon lights of the area’s numerous clubs, bars, and movie theaters illuminate the night sky, that the area really start hopping.

Shibuya is home to Tokyu and Seibu, two of Tokyo’s largest department stores. Locals often refer to Tokyu as ‘Ichi Maru Kyu’ (1-0-9), a play on the department store’s name which sounds like 10 (to) and 9 (kyu) in Japanese. Tokyu is also famous for being the birthplace of the kogal subculture, whose dark and artificially tanned style spread across Japan. Seibu Department Store is known for Loft and Parco stores. The immensely popular shopping area that divides Tokyu and Seibu is called Center Gai.

Shibuya also lays claims to Tokyo’s most popular meeting spot – the bronze statue of Hachiko the dog on the west side of the plaza. Unaware that his master had died at work, the faithful dog waited patiently by the station for nine years for his return.

How to get to Shibuya

Shibuya Station is one of Tokyo’s busiest and serviced by many train and subway lines.