Things To Do In Coimbra

Coimbra doesn’t always make it on to the hit list of holiday goers visiting Portugal from overseas, yet this underrated city is oozing with history and has plenty to offer sightseers.

This enchanting city was in fact Portugal’s capital for over 100 years during medieval times, before it was usurped by Lisbon in 1255. You’ll see signs of this grandeur, as well as traces of Roman rule, in the ruins and remaining architecture littered throughout the city. Coimbra is also famed for its university, which is the oldest in Portugal, and it features some incredible structures that have earned it a designation as a UNESCO World Heritage Site.

As well as being historically interesting, Coimbra is an incredibly picturesque city thanks to its location next to the scenic Mondego River. It’s also home to several hills, including the one the university is placed on, that offer excellent views of the city.

To help you make the most of your time in Coimbra, we’ve put together this list of the best things to do while you’re there – and be warned, one day just won’t be enough!’

It makes sense to kick-off our list of things to do in Coimbra with the University that the town is famed for, so here we go. Coimbra University was Portugal’s first university and was established in Coimbra way back in 1537 (it was actually founded in Lisbon in 1290). Despite its age, the university still functions today, making it one of the longest operating universities in the world.

It’s located atop the tallest hill in the city, and this same location was used in previous centuries to house Portuguese kings, so you can bet that it offers a good view!

The university expanded over the years, and new buildings were constructed. We’ll look at a few of them below but we can’t list them all – you really do need a day to just stroll around and take in all the different styles of architecture. Make sure you take some water with you and allow plenty of time too, as it’s hilly and gets very hot in summer, and we wouldn’t’ want you to miss out on anything.

Although lots of the university is open to the public, if you want to take a closer look at certain parts, you’ll need to purchase a ticket. For €12 (€9 for concessions) you’ll get access to the Biblioteca Joanina, Chapel of São Miguel, Paço Real, and Museu da Ciência. 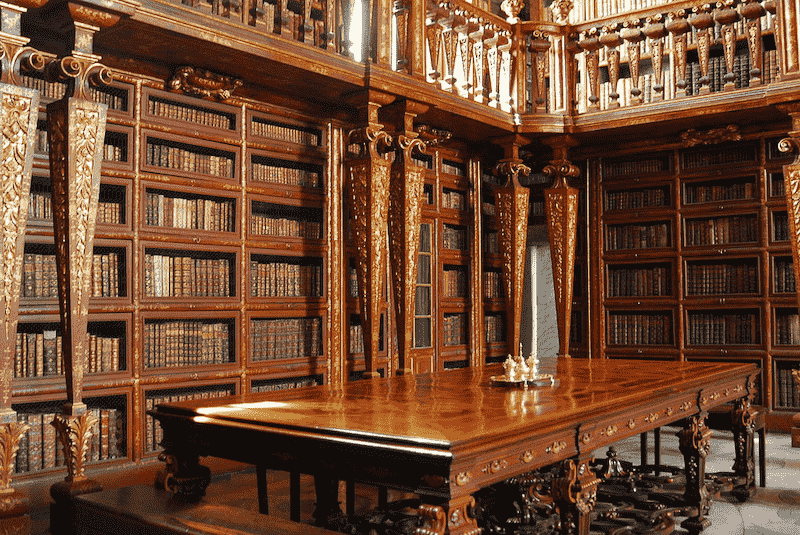 Probably the most internationally renowned building associated with the university is the Biblioteca Joanina (or the Joanina Library). The exterior of this baroque library, constructed in the early 1700s, is a work of art in itself, and the interior is just as impressive to behold. The collections within are awe-inspiring – there are over 250,000 volumes housed within three cavernous rooms and placed on gold-garnished shelves – and many are the finest works Europe had to offer during that time.

Researchers still use the books to this date, but curious visitors will have to purchase tickets to marvel at the books from afar. Be warned though – there may be some bats around (they actually keep the books safe by eating many of the insects that would otherwise ruin them!). 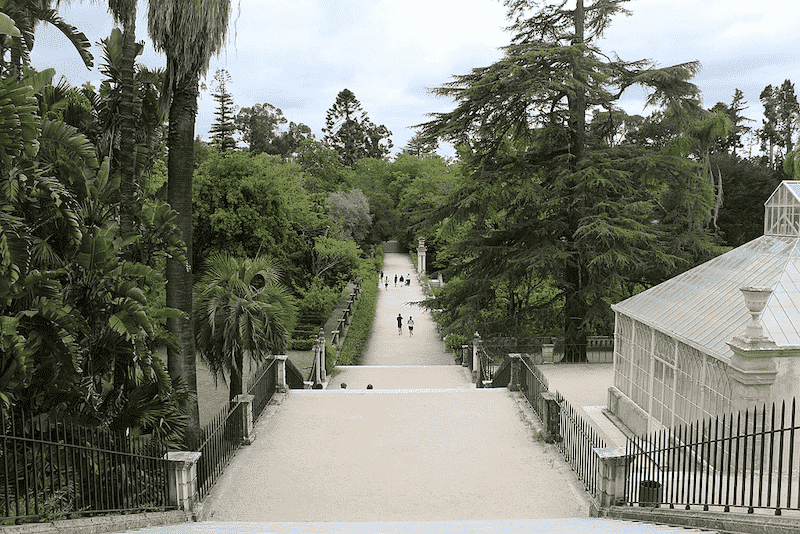 It’s not only the buildings associated with the university that are spectacular – the gardens are pretty impressive too. The university-owned Botanic Gardens of Coimbra were initially established to aid the departments of medicine and natural history and were frequented by Avelar Brotero, a Portuguese scientist who authored many influential botanical publications.

Nowadays, this beautiful garden provides a welcome respite for wanderers taking a break from their tours of the nearby buildings. The plants, fountains, and greenhouses create a tranquil atmosphere, and the gardens are completely free to enter. 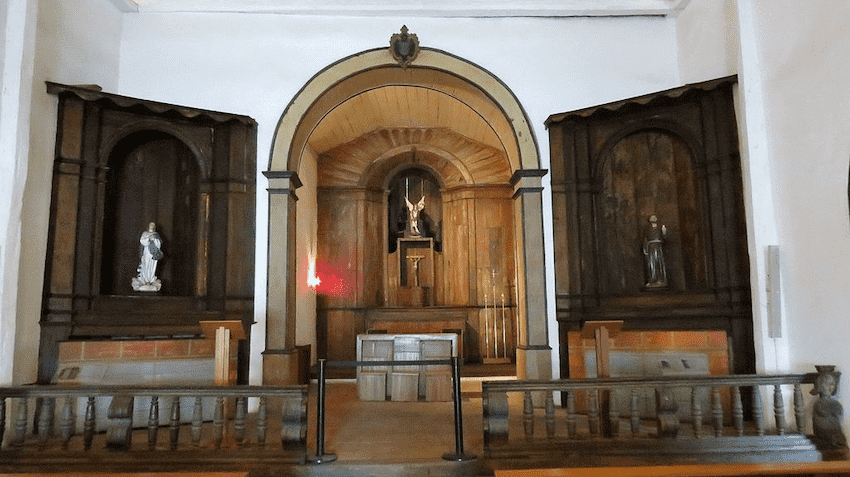 Another university-associated building that deserves a shout-out of its very own is the Chapel of São Miguel (we’ll stop after this one, we promise). Built in 1517, with various additions over the years, this building is a masterpiece in itself. The interior features tonnes of classic Portuguese blue-and-white tiling (known locally as ‘azulejos’), the ceiling is beautifully painted, and the alter itself is constructed from wood and lavishly adorned with figurines and gold paint. It’s also home to an impressive organ that dates way back to 1733. 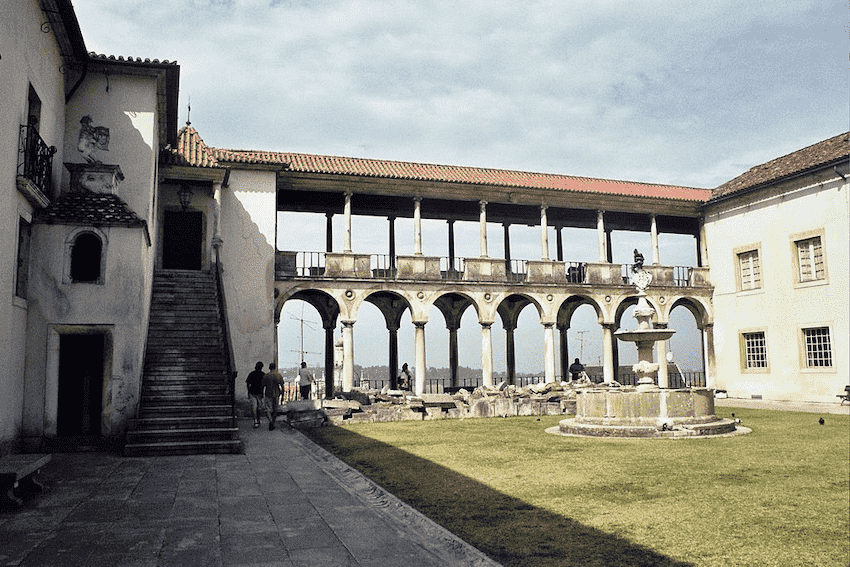 The Museu Nacional Machado de Castro (Machado de Castro National Museum) is an art museum that takes its name from a famed Portuguese sculptor. The building itself is somewhat of a historical artifact, and its construction began in medieval times, although various eras have influenced the building work since then.

There are various exhibitions on all things history, and the museum is situated on top of a Roman cryptoporticus more than 2000 years old, which is primarily what earned the museum a UNESCO World Heritage Site designation.

The lower level is home to historical local sculptures, made from a mixture of stone, terracotta, and wood, while on the higher floors you’ll encounter trinkets, religious paintings, and other dated artifacts. With so much to see, it’s best not to rush, and you can take a little break if you need it in the cafe or restaurant. 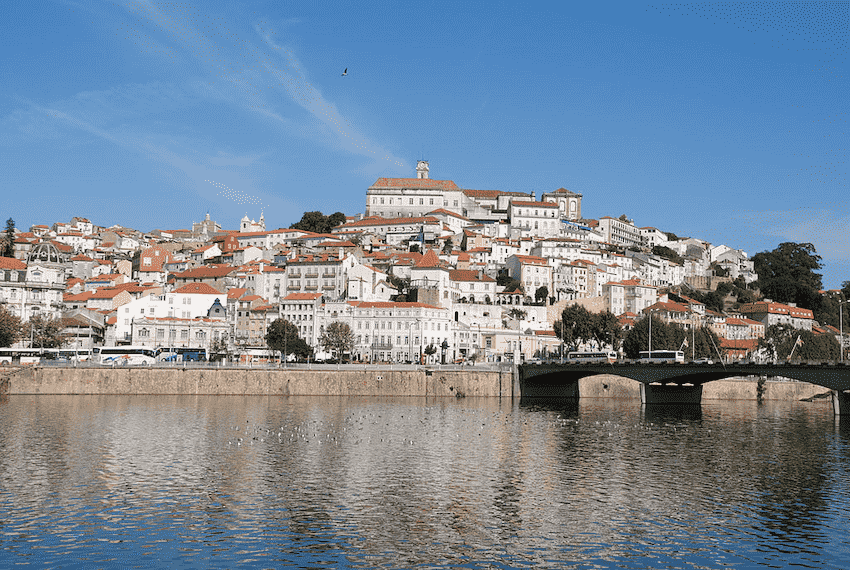 Cruise along the Mondego river in a Basófias

With all those historical buildings and museums to explore, not to mention all those hills, you’re bound to need a little time out at some point during your trip to Coimbra. One especially peaceful way to soak in the scenery while giving your legs the rest they deserve is to take a ride along the Mondego river in a Basófias boat.

Tour rides last just under an hour, but in that time you’ll set eyes on the university, the old cathedra, Santa Clara-a-Velha Monastery, and more – all of which look that bit more magical from the water. We honestly can’t recommend this trip enough! 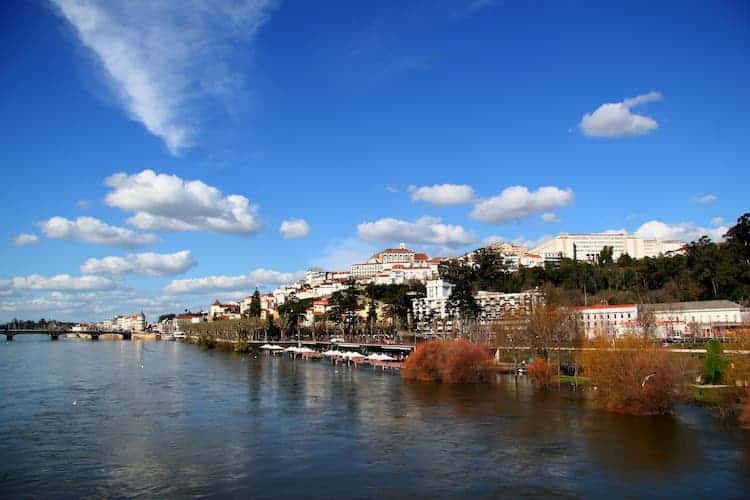 The Edificio Chiado is a department store-turned-art gallery and the building, with its pale walls, large windows, and frilled wrought-iron decorations are easily spottable as you stroll down Rua Ferreira Borges. The gallery hosts a range of temporary and permanent exhibitions, some of which are free and some of which will cost you a couple of euros to enter.

It won’t keep you occupied for hours (most trips there are fairly short), but it’s definitely worth popping in if you’re in the area. 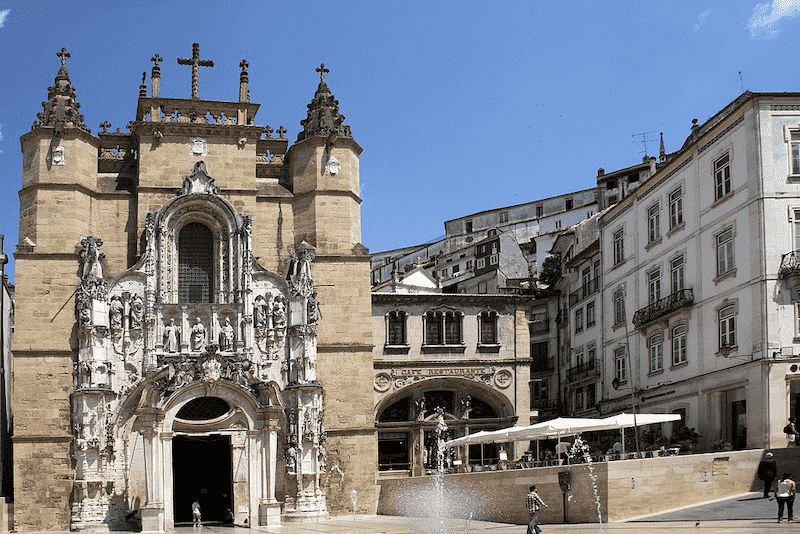 To look at it, you wouldn’t know that this monastery dates all the way back to the 12th century. And that’s because it was completely revamped in the 16th century on the orders of King Manuel. Regardless, the level of detail on the sculptures is impressive and overall it really is a masterpiece of Portuguese Renaissance art.

Although the outside is impressive enough, if you find that you’re still curious, you can also enter the interior, where you’ll come across tombs, relics, and more. See here for more detail of the history of the building (there’s more to it than meets the eye). 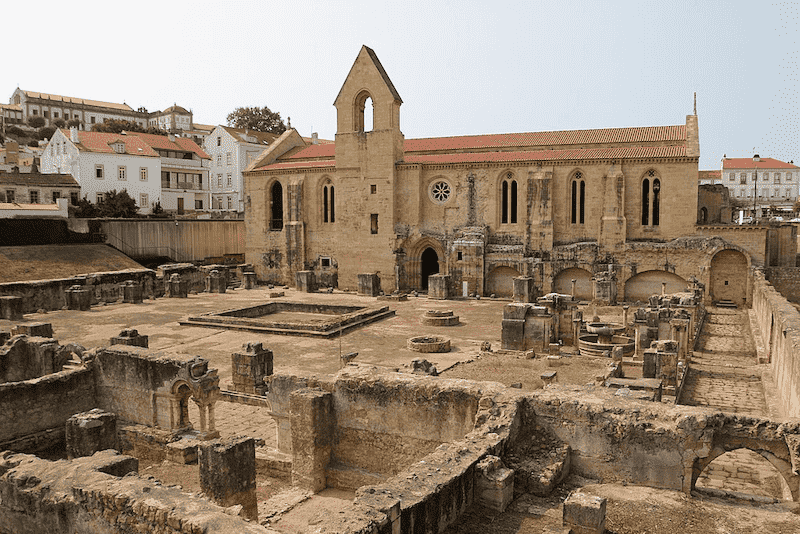 The Monastery of Santa Clara-a-Velha is another historical building found within Coimbra, and it dates back to the 1300s. It’s fairly gothic in its appearance and has a somewhat eerie vibe. Situated close to the river, this monastery battled with floods for years, before it was eventually abandoned and a new monastery was built on higher ground (Santa Clara-a-Nova).

Work to restore the structure began in 1991, and the site is now home to an interpretation center where you can watch short films about the building and also take a look around the museum that features various recovered objects. 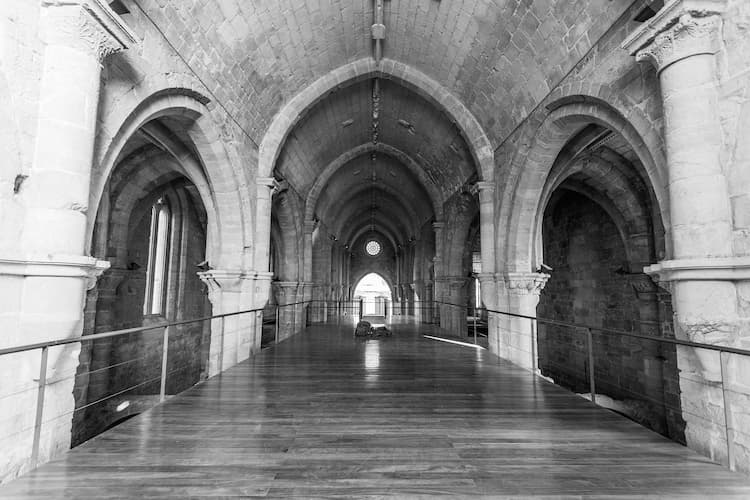 The Pedro e Inês Bridge is a footbridge that spans the Mondego river, offering great views to pedestrians. The unique design was inspired by skimming stones, and the bridge is divided into two sections, resembling individual stones. Although the two sections do meet, and actually support each other, from certain angles, it looks as though the sections don’t unite – hence the local term ‘the bridge that doesn’t meet’.

That’s all very well, but ‘who are Pedro and Inês?’ I hear you ask. They are key characters in a true tale of love, despair, and revenge. During the reign of Portuguese King Afonso IV, who took the throne in 1325, his son, Pedro, was married to a woman called Constance. His heart, however, lay with his wife’s lady-in-waiting, Inês, and the lovers began a somewhat scandalous relationship. After the death of his wife, Pedro and Inês wasted no time in moving in together and starting a family (they had four children together).

King Alfonso, however, had other ideas. Tired of the disapproval his son’s relationship was getting from the court, and the power he perceived Inês to hold over his son, the king ordered the murder of Inês, much to Pedro’s dismay. In the end, Peter became king and took his brutal revenge on the murderers, earning himself the title of Peter the cruel. In a slightly gruesome display of love, once king, he moved Inês’ corpse from her tomb to the Queen’s throne, where he crowned her as a queen of Portugal forevermore. 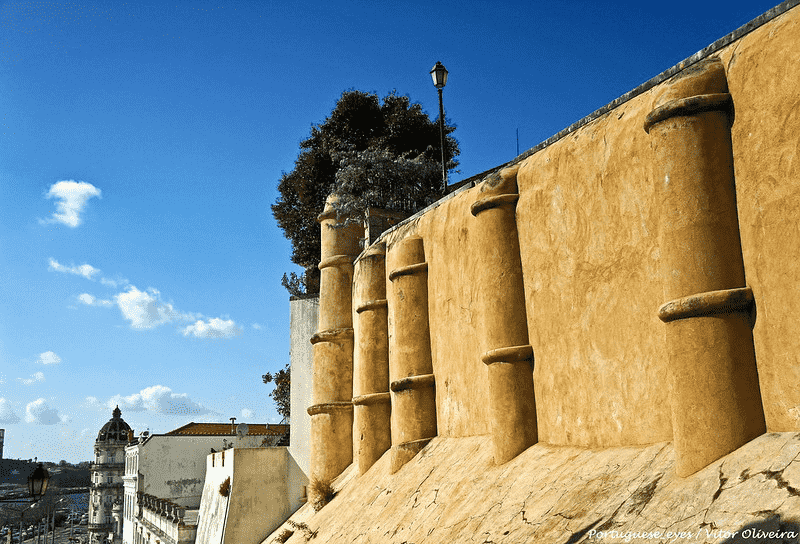 If you want to learn some more about the medieval roots of Coimbra’s architecture and defenses, then you should head over to the Núcleo da Cidade Muralhada. This museum is located in the Torre de Almedina (Almedina Gate Tower), a medieval building that is not only a national monument but also home to an interpretive center as well as various educational exhibitions.

In the interpretive center, you can find out how the walls protected the city in years gone by with the aid of a model of the medieval town, and there’s also a walking path that lets you witness the remains of the wall. 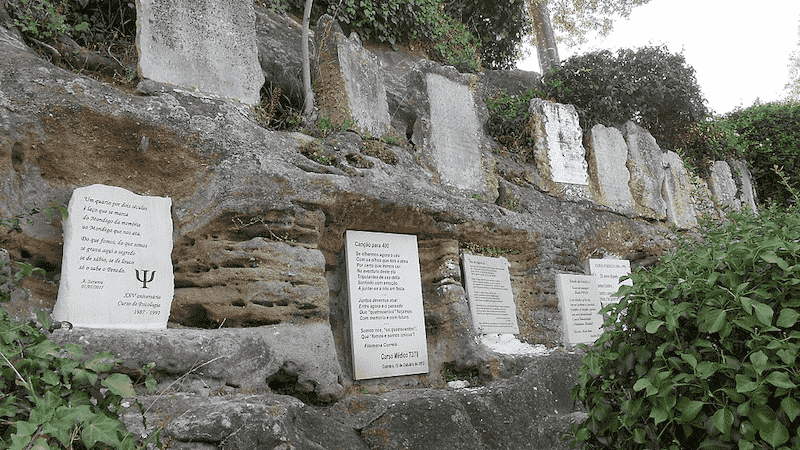 If you’re feeling a bit overwhelmed by all that history, why not take a trip to the hilltop garden of Penedo da Saudade to sit back, relax., and soak up the views. Although it has a somewhat cemetery-like appearance, on closer inspection, you’ll find that the large stones placed on the hilltop feature carved expressions of love for the city, mainly from ex-students promising to return again.

But we’re afraid that even here you can’t escape history entirely… this romantic spot is rumored to be where Pedro mourned the loss of his wife Inês.

With all these emotions flying around, this spot is a nice place to go towards the end of your trip and say a proper farewell to Coimbra. 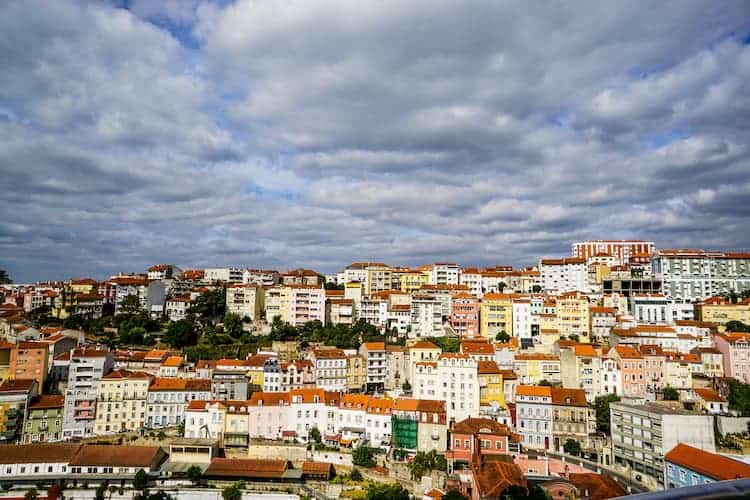 So, there you have it, the top things to do while you’re in Coimbra. As we’ve seen, the streets of Coimbra are overflowing with history, and the fantastic architecture paired with the steady flow of the Mondego river make for a gorgeous backdrop for your historical explorations. Featuring the oldest functioning university in the world, this city manages to excellently blend old with new, and people of all ages will appreciate the magic of this wonderful place.

Visited far less than Lisbon and Porto, yet with almost as much to offer in terms of Portuguese history, Coimbra is definitely a somewhat hidden gem on the tourist trail that’s definitely worth adding to your itinerary the next time you’re in Portugal.