10 Spectacular Castles to visit in Switzerland

With snow-capped mountains, lush surroundings, and great lakes, Switzerland is certainly the stuff of dreams. It also helps that the country is dotted by magnificent castles and palaces dating back centuries. With most castles standing against a back drop of clear blue skies and Alpine scenery, travelers to Switzerland can easily make their own fairytale come alive with a visit to any one of them. 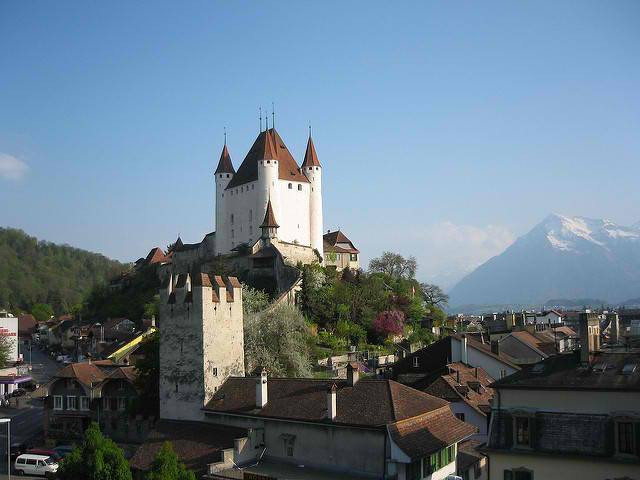 The Thun Castle, locally known as Schloss Thun, was built in the 12th century. It is found in the city of Thun as a focal entry point to the Bernese Oberland. Originally built as a fortress, the castle was a symbol of power with its imposing tower, the Knight’s Hall. The Knight’s Hall has been well-preserved up until today, standing as it has originally been made in the 12th century.

Visitors can explore all five floors of the castle, including a prison built in 1886, which has been turned into the historical museum. It also now holds a conference and training center, the upscale Schloss Hotel Thun, and its own restaurant. 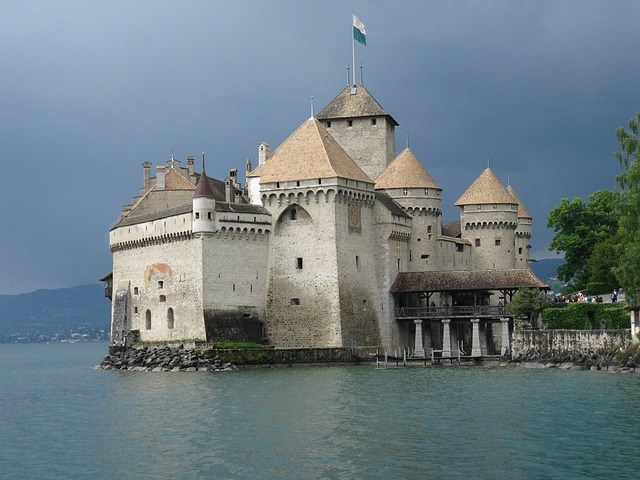 This medieval fortress on the banks of Lake Geneva is truly a sight to behold. The Chillon Castle is an authentic Medieval site with foundations dating back to the 12th century. Chillon was the residence of the Counts of Savoy from the 12th to the 16th century. Here, they controlled the passage of ships on Lake Geneva and the land route to the St. Bernhard Pass. Ownership has been passed on to several noble families, and now Chillon welcomes over 350,000 guests every year. Chillon sits on a rock surrounded by water, naturally creating a moat around the castle.

There are several highlights within Chillon. There are underground dungeons cut into rocks that exhibit gothic architecture, four courtyards with the “Courtyard of Honor” as the grandest and of the most significant ceremonial importance, great halls that look out to views of Lake Geneva, a chapel, defenses, rooms that served as sleeping quarters of noblemen, and the list goes on.

They also have a private little beach that can be used for special occasions.

The castle is open every day except on the 1st of January and the 25th of December.

The castle closes its doors at the latest 1 hour after the ticket office closes.

Hotels & Hostels are listed from most to least expensive. 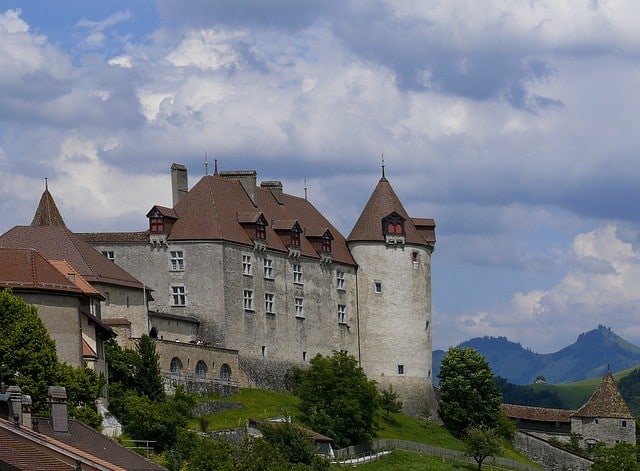 The Gruyère Castle is located in the medieval town of Gruyères, Fribourg. The structure was passed on to several noble families, built between 1270 to 1282 in the typical square plan of the fortifications in Savoy. The little town is a post-card worthy location, a little hill with the castle and museums that tell 800 years of cultural history.

It first opened its doors to the public in 1938. Visitors can experience a medieval adventure through the castle’s ramparts, French style gardens, guard rooms, and romantic salons. Within its walls are historical treasures like the capes of the Order of the Golden Fleece and glass windows dating from the Middle Ages, bespoke frescoes ordered by the bailiffs under the Ancient Regime, paintings, and decorations created by 19th century artists. 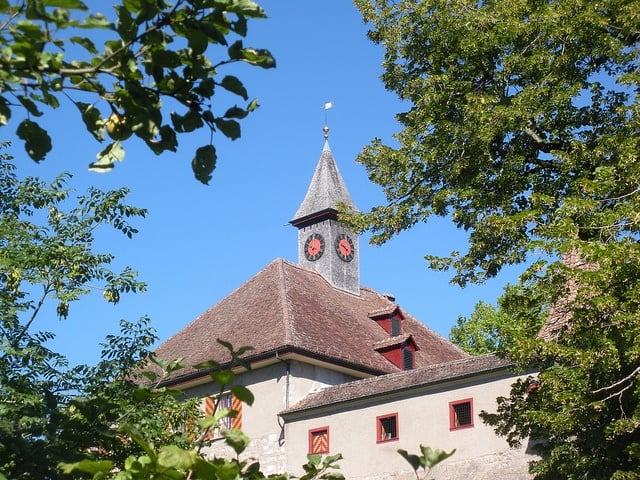 The Kyburg Castle Museum is an award-winning destination that sits above the river Toss in the Canton of Zurich. From as early as 1027, it served as a throne that emulated the power of the noble families who once ruled over the region – the Kyburgers, the Habsburgers, and Zurchers.

In 1865, Kyburg Castle became the first castle museum in Switzerland when it finally opened its doors to the public. The museum is now run by the Museum Schloss Kyburg Society and opened a permanent exhibition which has been running since 1999. The Garden of High Bailiff’s Wife was introduced in 2001, and the whole exhibit was given a “special commendation” award by the European Museum Forum in 2002.

A tour around the castle gives visitors insights into daily life within the castle over the last 800 years.

The Castles of Bellinzona

The City of Bellinzona sits on the foothills of the Alps and keeps its rich historical heritage alive with three castles. These fortresses were a barrier to the gateway of the Alps right across Ticino valley and has now earned UNESCO World Heritage status. The fortifications of Bellinzona have been in place, though crudely at the beginning, all the way back to prehistoric-time settlement on Castelgrande hill. Extensive building by the Dukes of Milan in the 15th century resulted in the battlements, towers, and gateway that visitors see today. 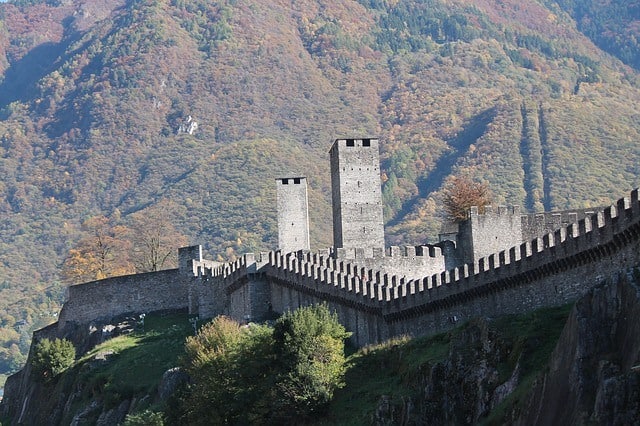 The first fortification of the Castelgrande dates back to the 4th c.A.C., with the first defensive construction built in the 6th century. After centuries of renovations, Castelgrande now holds a museum, a restaurant, and panoramic terraces to delight visitors. From Piazza Collegiata and Piazza Nosetto in the town, visitors can go on foot through steps that directly lead to the castle within minutes, or via vehicle through the winding road from Via Orico. 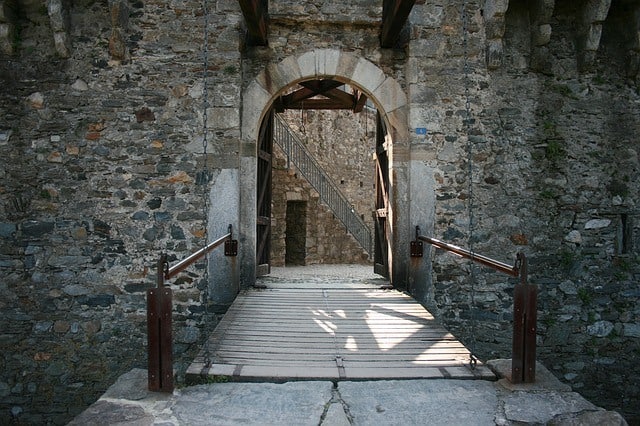 Ninety meters above Castelgrande is Castello di Montebello on Montebello hill. This is where the original defenses of the old town originated. The bowels of the castle date back to the 13th and 14th centuries, and has been restored several times to preserve its original state. This is a more spectacular castle with views of Lake Maggiore in the distance. It has external courtyards with the towers and “Rivellino” were built, and can be accessed from the residential area of Nocca or Viale Stazione. 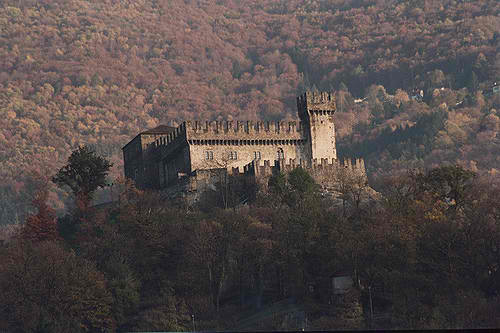 After the defeat of the Milanese troops at the Battle of Giorcino in 1479, military engineer Benedetteo Ferrini of Florence built the Castello di Sasso Corbaro within just six months. The site is positioned 230 meters over the town and primed for better protection of the Ticino Valley. The square castle grounds is surrounded by 4.7-meter thick walls to protect an equally geometric castle. It has gone through several transformations, from fortress to residence, and is now open to the public with a museum and a chapel. 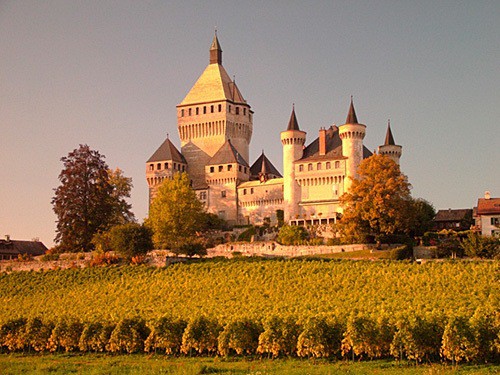 Vufflens Castle sits beautifully among the Vufflens Vineyard in the region of Morges in the Canton of Vaud. It is actually a small group of fortified Romandy castles with brick construction dating back to the 15th century. Technically, the castle is not open for public viewing as it is privately owned. Fortunately, a 30-minute walk through the equally stunning vineyards give a fairytale view of the castle, the lake, and the Mont Blanc. 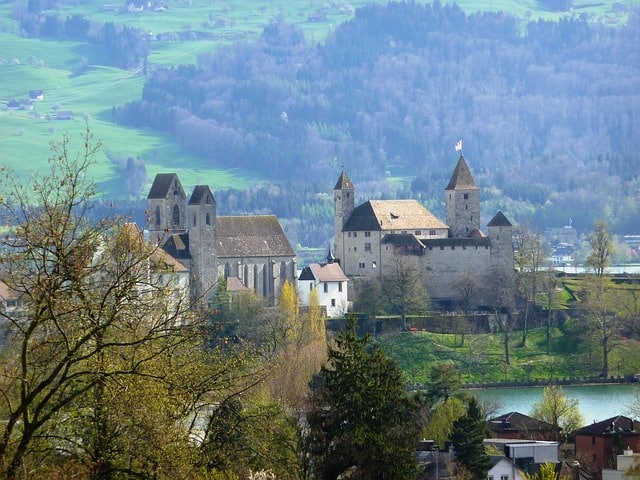 Rapperswil Castle sits at an enviable location on the shores of Lake Zurich. Towards the end of the 12th century, the castle was built atop Lindenhof and extends through Rapperswil. Schlossberg, the southern flank of the hill, is where the oldest vineyard on Lake Zurich can be found. The north flank, on the other hand, is a park that serves as a home for fallow deer. It also has a playground for children.

Within the castle is the Polish Museum, which opened in 1975. Here, visitors can see the history behind Swiss-Polish relationships and cooperation. Highlights of the museum talk about the story of Nobel prizewinner Marie Curie-Sklodowska, and pianist Ignacy Jan Paderewski among others. Visitors can also walk along the medieval wall and on the parapet walk towards the castle tower for a view of the “City of Roses”. 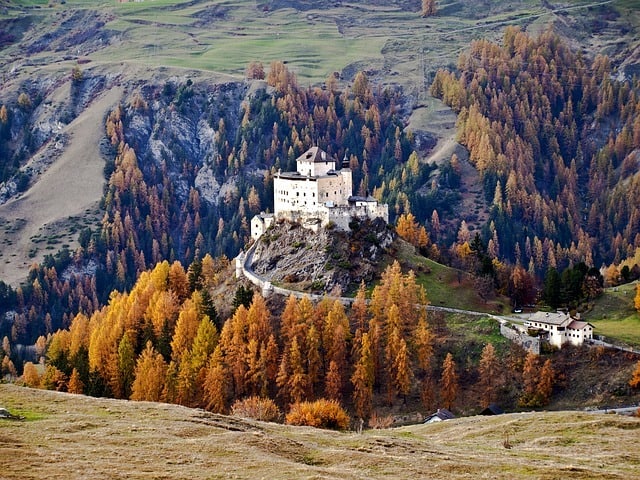 In 1919, Castle Tarasp opened its doors to the public after a very long history of siege and battles for ownership. It was built in the 11th century and originally belonged to Austria, but was finally abandoned in 1803. The decaying castle was bought by Karl August Lingner in 1900, where restorations went on for 16 years.

Castle Tarasp is identified as the most imposing castle in Graubunden, built on a 100-meter high rock. It dominates the locality in the Upper Engadine, overlooking the hamlet at the foot of the castle hill and the lake of Tarasp. Visitors can view several bedrooms and grand halls, the castle chapel, and the famous organ with 2,500 pipes. This is also a venue for public organ concerts that the castle organizes, and is open to “active vacations” where visitors can help with maintenance work.

The castle is only accessible through guided tours. The tours are usually held in German, with translation to English or Italian upon request

Payments can only be made in CHF or EUR cash. Credit card payments are not allowed.

Hotels & Hostels are listed from most to least expensive. 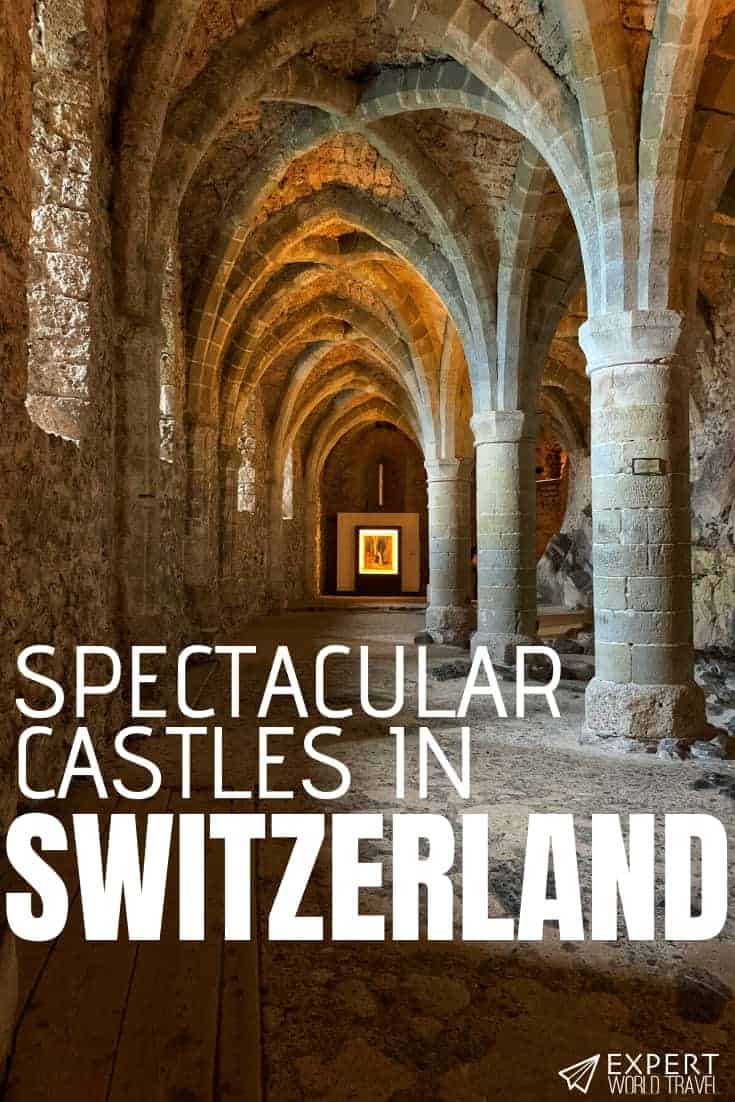 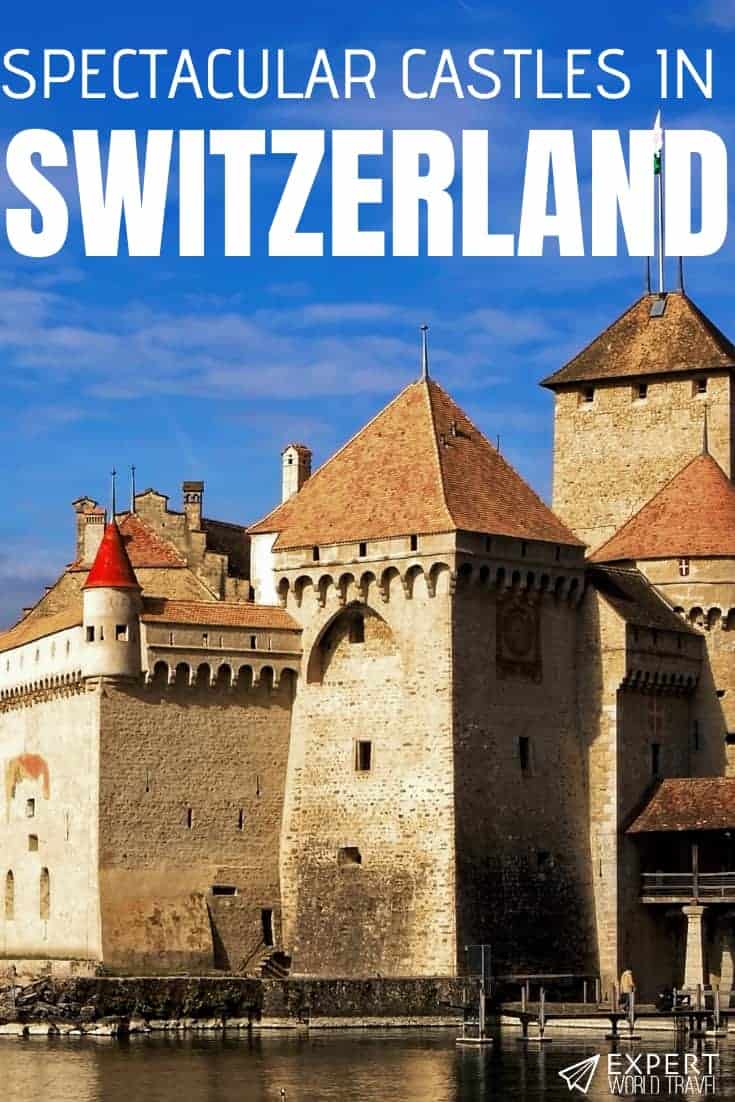