Here’s a fun Tokyo fact for you – before it became the home of massive shopping malls, it used to be the city of shopping streets. Tokyo still has numerous shopping streets and covered arcades, but they’re not quite as famous as the twelve-story malls that sell everything from underwear to Anime costumes.

Tokyo’s shopping streets are special because they offer a rare glimpse into a previous era of this city, plus they give you some idea of what everyday life for the locals is like. So, read on to see the 12 best shopping streets in Tokyo, and discover which ones seem interesting enough to fit into your Japan travel itinerary!

It’s also not as busy as Nakamise-dori, so it’s a good place to go if you want to go shopping but you’d rather avoid the huge crowds that are present in the trendier shopping streets of Tokyo. Denbouin-dori is much more down-to-earth, plus it caters mostly to the elderly locals who live in the neighborhood, so the selection of shops isn’t quite as appealing to the average tourist.

This shopping street is a great place to buy some traditional Japanese handicrafts and souvenirs, as well as local delicacies. There are also several notable sights in this shopping street, the most famous of which is a statue of the thief Nezumi-kozo situated atop a roof. 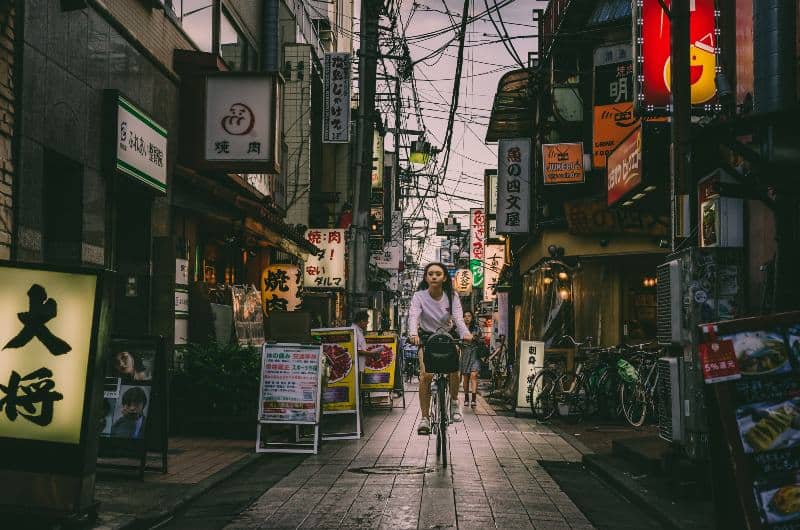 Nakano Sun Mall is an indoor shopping arcade with more than a hundred different stalls. The entrance into the shopping arcade is from the Nakano station, which is easily accessible by JR trains from other parts of the city.

This is a classic covered shopping street in Tokyo and a great place to visit no matter what exactly you’re looking to buy. With more than a hundred different vendors, you’ll find everything here, from luxury watches to excellent Japanese street food, with dozens of clothing shops in between.

It’s worth noting that the Nakano Sun Mall is a rather narrow shopping street and it tends to get very crowded. If you want to avoid huge crowds in this famous shopping street, it’s best to head there either early in the morning or late in the afternoon. 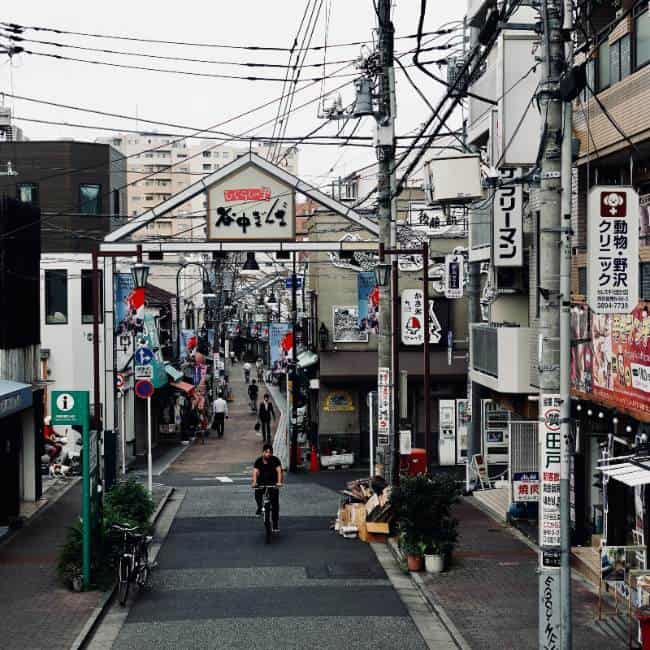 Situated in the Taito Ward in east Tokyo, Yanaka Ginza is a charming street that’s much more popular with locals than tourists. It’s about five minutes away from the Nippori Station, so it’s easily accessible by train.

Yanaka Ginza dates back to the 1950s, and since then it has been a place for locals to come to get groceries, eat, and hang out with their neighbors. The shopping street has only about 60 shops and restaurants, so it’s not nearly as popular as some of the bigger ones.

The lack of tourists means this is a rare opportunity to get some insight into the everyday life of Tokyo locals, plus it’s a good place to try some delicious food and window shop. 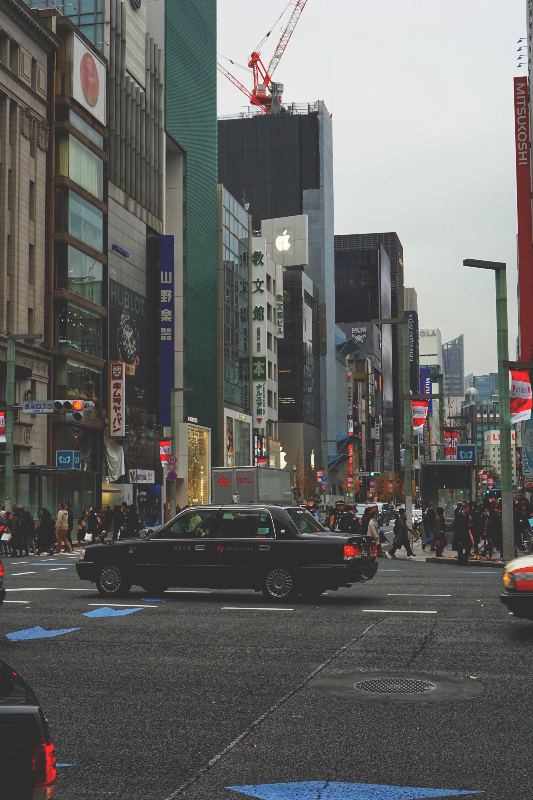 Chuo-dori is one of the two main streets that run through Ginza, and one of the most popular shopping arcades in this part of the city. This area is serviced by the Tokyo Metro Ginza line, and it’s easily accessible by trains from other parts of the city. Get out at the Tokyo Station, and Chuo-dori is just a short walk away.

The shopping street is lined with various fashion boutiques, department stores, and restaurants, making it a true haven for anyone looking to do some shopping. There are even huge, multi-floor stores in this Tokyo shopping street, so it’s really the best place to come no matter what you’re looking to buy.

The street is massively popular with tourists, so don’t be surprised to encounter huge crowds when visiting Chuo-dori.

This shopping street isn’t closed for traffic on weekdays, but on the weekends the automobiles are banned and it becomes a pedestrian-only street. There are even sun umbrellas and loungers in the middle of the road, and all visitors are free to use them if they want. Also, it’s worth noting that Chuo-dori intersects with Harumi-dori street, which is the other main street for shopping in Ginza.

Sugamo Jizo-dori is a traditional Tokyo shopping street situated in Toshima City. It’s an old-school shopping arcade that offers a rare insight into what shopping in Tokyo was like before the massive malls, so definitely come here if you want to see something different.

This Tokyo shopping street is known for being popular with older citizens, so it’s a great place to come if you’re shopping for elderly people in your life. It isn’t as popular with tourists as some of the other shopping streets in the city, mostly because the old-school style and shops don’t really cater to the average tourist.

But, that doesn’t mean it’s not busy – Grandma’s Harajuku is extremely popular with the locals, and it’s common to encounter large crowds even here.

This shopping street is some 800 meters long, so it is one of the longest shopping streets in Tokyo. It’s got more than 200 shops, which sell everything from clothes to delicious Japanese chocolates. There’s also a popular Buddhist temple here that organizes events on the 4th, 14th, and 24th of every month, which see even more vendors set up stalls in the famous Tokyo shopping street.

Togoshi Ginza is the longest shopping street in Tokyo and one of the best places in the city if you want to discover Japanese street food. There are around 400 shops on either side of the narrow 1.3-kilometer shopping street, which offer pretty much anything you’re looking for.

Fashion boutiques, grocery stores, and street food vendors are abundant in Togoshi Ginza, and they’re certainly not the only ones. This is also one of the best places in the city to go shopping for everyday essentials, and it offers a unique insight into the daily lives of locals in Tokyo.

Also, it’s worth noting that Togoshi Ginza isn’t one of the most exciting streets in Tokyo, so it doesn’t get nearly as many tourists as the others. It’s less crowded and quieter than some other famous streets in the city, which makes it a great place to visit if you want to experience Tokyo’s shopping streets, but you’d rather avoid the huge crowds. 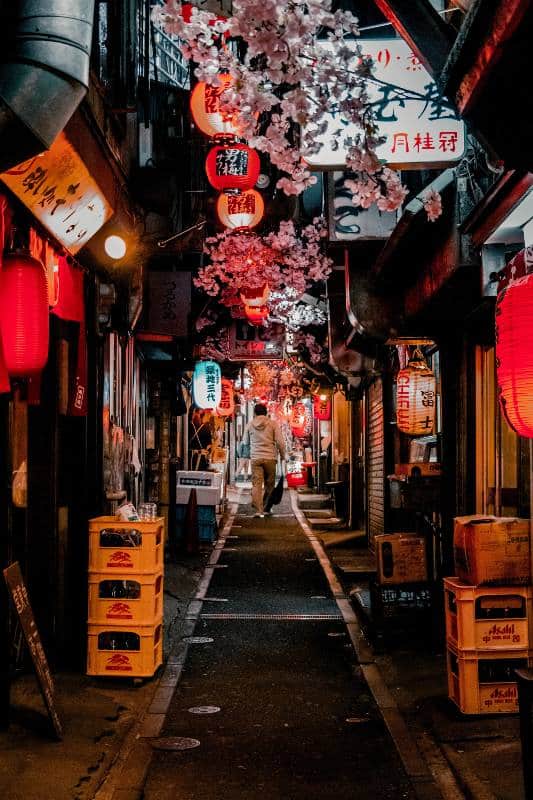 Omoide Yokocho is an iconic alleyway in Tokyo’s Shinjuku City. It’s best known for the numerous bars and restaurants that line both its sides, and it’s one of the best places in the city to visit if you want to discover delicious Japanese street food.

Come here at night, for an entirely different experience. The neon signs bleed color and light into the surrounding alleys and the entire place feels like a set from Blade Runner. It’s one of those places that feel like you’ve stepped into a different world, and it’s definitely worth exploring while you are in Tokyo.

It’s also worth noting that Omoide Yokocho is home to quite a few bars that stay open late into the night, so it’s a good place to come if you’re looking to have a fun night out in Tokyo. 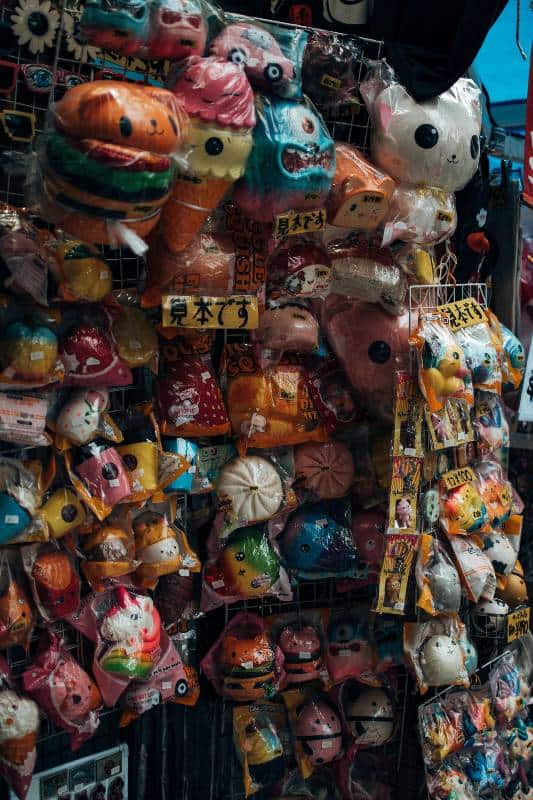 Takeshita Street is a pedestrian-only shopping street in Harajuku. It’s famous for shops that sell wacky and colorful clothes, which is exactly what makes it famous among the younger crowds in Tokyo. Tourists also love Takeshita Street, so expect to encounter huge crowds if you decide to visit the shopping street.

In addition to countless fashion boutiques, this shopping street also features cafes, restaurants, and major international chain stores. You’ll find everything from McDonald’s to kimonos here, and that’s precisely what’s so great about it. Whether you’re looking for souvenirs, tasty local delicacies, or just neon-colored clothes, the shops at Takeshita Street will exceed all your expectations. 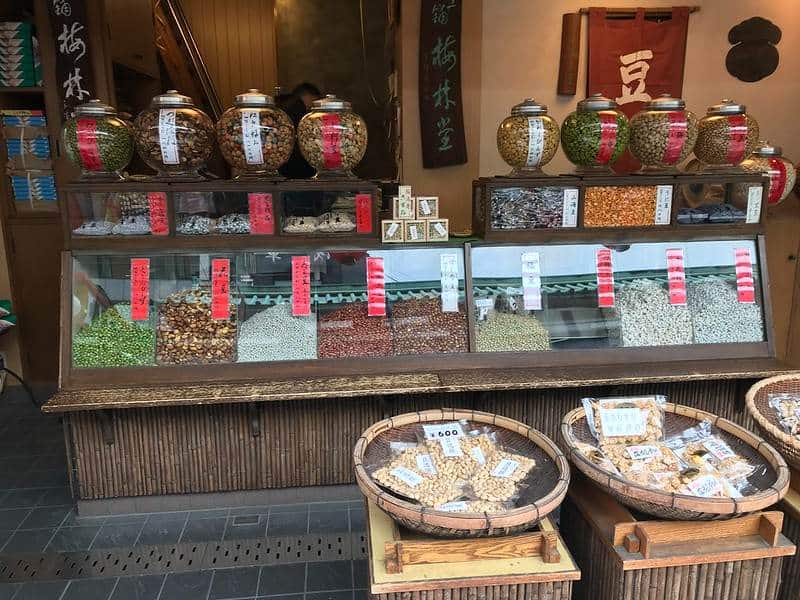 Nakamise-dori is a famous shopping street in Tokyo that connects the main gate of the Sensoji temple with its main hall. It’s only five minutes away from the Asakusa station, so it’s easily accessible by the main Tokyo metro lines. This is one of the busiest parts of the city, so be prepared for huge crowds.

The 250-meter-long street is lined with some 90 stalls and vendors that sell spices, souvenirs, snacks, and other traditional goods. This is one of the oldest shopping streets in the entire country, and it proudly showcases that with the Edo-period vibe that’s common in this part of Tokyo.

On the other hand, even though the shopping street manages to replicate the Edo-period vibe, there’s no lack of modern items for sale in the avenue. 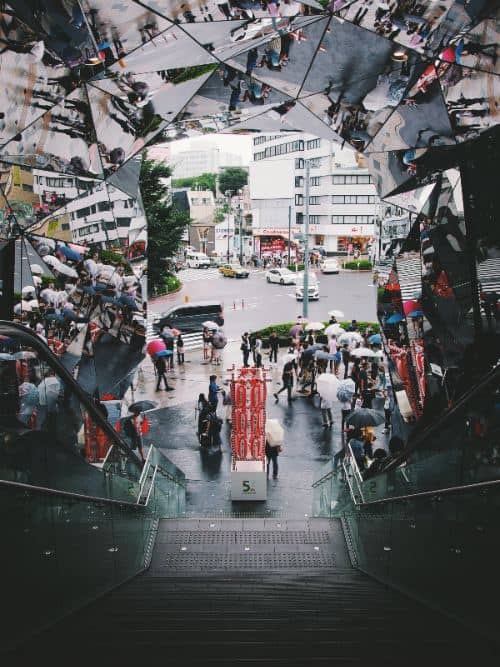 If you’re looking for luxury fashion shops in Tokyo, Omotesando is the best shopping street to visit. The fascinating avenue is known for many things, and the presence of high-end designer stores is merely one of them. This is where you’ll find the likes of Dior, Gucci, Prada, and similar brands, as well as some of Tokyo’s best coffee shops.

Omotesando is also the main thoroughfare through both Aoyama and Harajuku, with pedestrian and vehicle traffic. It’s known as the beautiful three-line avenue that stretches through Shibuya and Minato, with a multitude of cafes and fashion boutiques on either side of the shopping street.

This fascinating street is also famous for mesmerizing modern architecture. Most stores along Omotesando are situated in unique modern buildings that are so impressive to see it’s worth it to come here just to see the architectural wonders, even if the stores are outside of your price range. 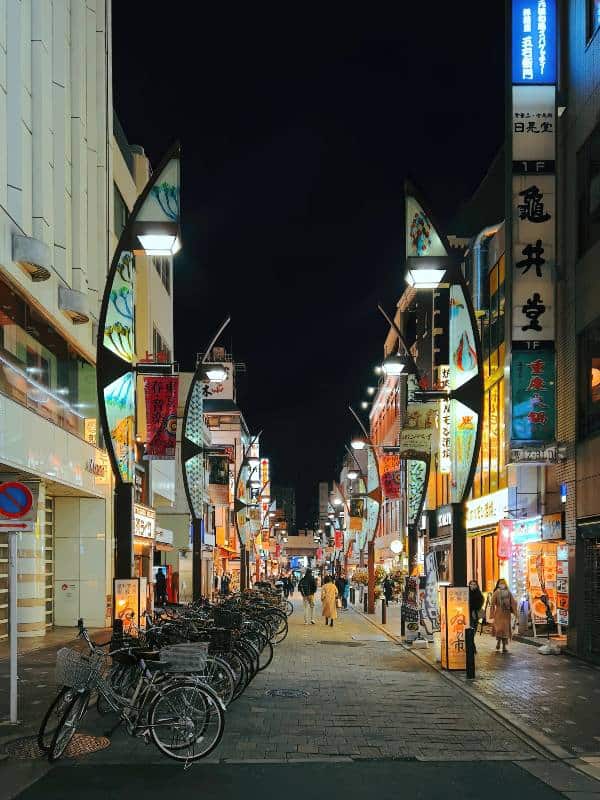 Ueno Ameyokocho is an open-air shopping arcade situated in the Taito Ward. It’s right next to the Ueno Station, so it’s easily accessible by the JR Yamanote Line trains.

The shopping street features numerous stores that sell everything from fresh fruit to electronics, and in most cases, the prices are unbelievably good. There are also several drugstores and pharmacies in this shopping street, which are particularly popular for the amazing Japanese cosmetics and skincare.

There’s also a great selection of restaurants and street food vendors in the open-air shopping arcade, so plenty of opportunities to try some tasty Japanese delicacies. It’s worth noting that this is one of the most popular shopping streets in Tokyo, so expect it to be very crowded. If you’re trying to avoid the crowds, your best bet is to head to Ueno Ameyokocho on a rainy day.

Kichijoji Sun Road is an indoor shopping arcade situated directly across the Northern exit of the Kichijoji train station in Musashino City. This is also the main street of the entire northern Kichijoji area, so the place is usually very busy. It’s a covered arcade, so even the rain won’t disperse the crowds of shoppers.

But you won’t see too many tourists here – it’s not a famous shopping street like the ones in Ginza and Harajuku. Instead, you’ll mostly see locals going about their lives and doing their shopping. Kichijoji Sun Road has pretty much everything you could ever need, and you could easily shop only here during your entire stay in Tokyo – that’s how varied and abundant the shops are.

There are also loads of restaurants in this Tokyo shopping street, and they’re not all specialized in Japanese cuisine. You’ll also find numerous international restaurants here, as well as classic food chains like McDonald’s and KFC.