American Tourister luggage is a great choice if you're looking for affordable luggage that is still practical and durable. The company is actually owned by Samsonite, so you know you will get some of that good old Samsonite quality.

The Air Force 1 luggage collection features four suitcases. They all have the same features, and the only difference between them is their size.

In this review I will tell you everything you need to know about the Air Force 1 suitcases - both what you'll love and what you'll hate. You'll find out what features these suitcases are equipped with, but also what they are lacking. So, if you're ready to find out if this is going to be your next purchase, just scroll down!

So, the first thing that you need to be aware of is the general specifications of the Air Force 1 suitcases. There are four sizes to choose from, each with a different capacity and weight. And as always, you should choose the size of the suitcase that is the best suited for the length of your trip - the two smaller ones are a great fit if you're going away for less than two weeks. On the other hand, if your trip is going to last longer than two weeks, consider investing in one of the two larger Air Force 1 suitcases.

Two things need to be clarified; first, the overall dimensions of a suitcase are its dimensions including the wheels and the handles. The dimensions of its body are obviously smaller, but since the airlines consider its total dimensions when determining whether to treat it as a carry on or as checked baggage, they are the most important specification. With that in mind, only the smallst Air Force 1 suitcase can be used as a carry on. The other three suitcases are too large to be allowed inside the cabin.

But if you're a pro at packing, then you know just how much clothes you can fit inside its 34-liter capacity. I once managed to pack for an entire week inside a carry on suitcase! Granted, I had to sit on top of it to get it to close, but its overall weight still remained under 8 kilos - which is another airline carry on requirement, by the way.

So, what do you think? I, for one thing, am a big fan of the weight of this luggage. It is really lightweight, especially when you compare it to some other hardshell luggage of the same size - the American Tourister Curio comes to mind. This also means that you will be able to pack more items inside it, and you won't have to worry about going over the airline's weight limits as much.

Based on these specs alone, the Air Force 1 suitcase collection really looks like a force to be reckoned with. Will they still look like that once we examine all of their features in detail? Let's find out!

What Are they Made Of?

It is very important to know what your luggage is made of, so that you can take care of it properly. And that you can be prepared to deal with for the downsides of that particular material.

The Air Force 1 suitcases are made of polycarbonate. The upside of that particular luggage material is that it is extremely lightweight, and that is pretty much obvious from the individual weights of the suitcases. It is also a pretty sturdy material, and your Air Force 1 suitcase should be able to survive the touch love from baggage handlers without any major injuries.

But it won't get out scot-free. One downside of polycarbonate luggage is that it gets scratched and scuffed very easily. So, your Air Force 1 might look like it just came back from the battlefield even after one trip.

Of course there are ways to protect your suitcase from that - a luggage cover is the first thing that comes to mind. Not only will it help you stand out, and easily find your suitcase on the carousel, but it will also help protect it from those nasty scuffs and scratches.

Additionally, the fact that all of these suitcases have a ribbed shell will also help. The scuffs are much more visible on a shell that is completely smooth. And, even if your luggage gets a few scratches after your trip, they won't be as noticeable. 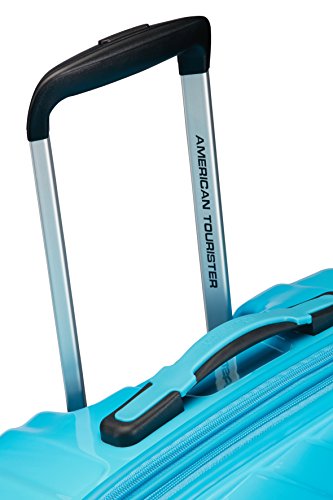 Wheels are a really important part of a suitcase. There are two types of wheels that we generally see on luggage - in-line skate wheels and spinner wheels. We'll only talk about the other type, since it is the one that the Air Force 1 luggage is actually equipped with.

Spinner wheels are wheels that can turn 360 degrees. Which means that you do not have to tilt your suitcase to get it rolling. In fact, you can push it in front of you or drag it alongside you - whatever floats your boat. The roll smoothly, and if you've never owned a suitcase with spinner wheels, they will blow your mind. I promise.

To be perfectly precise, the Air Force 1 luggage features double spinner wheels. Which are slightly sturdier than single spinner wheels, but they still have the same weak spot - you will break them if you insist on using them on uneven terrain. To ensure their longevity, pick up your suitcase in cobblestone alleys and when going up and down the stairs. 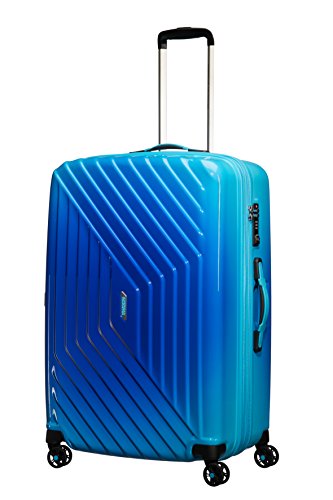 What About The Handles?

The wheel handle of your suitcase is equally responsible as the wheels for the easiness of its maneuverability. So it is a really good thing that the Air Force 1 luggage is equipped with a telescopic, double tube wheel handle. Which features a push button that allows you to lock it into position once it is extended.

The locking capability is important because it means that you won't have any issues with the handle sliding out when it shouldn't. Or just falling back in place when you stop to rest for a second. However, the handle can't be locked in multiple height positions, which means that it will not be a perfect fit for all of you. But that is a design flaw that I see in a lot of suitcases - even some top of the line Samsonites.

We also need to talk about the carry handles. Since you will have to pick up your suitcase from time to time, you want the carry handles to feel comfortable and soft in your hand. And the Air Force 1 will - the luggage features two ergonomically shaped and soft carry handles. One is on the top of the suitcase, and the other one is on its side, which is pretty standard. 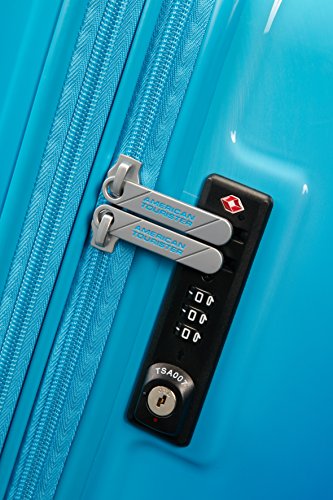 Anyone who's ever travelled to the USA knows that going through TSA can be excruciating. And, if you were ever lucky enough that they chose to randomly inspect your suitcase, then you probably know why a TSA approved lock is an important feature to have. Especially on checked luggage.

So yes, TSA agents can choose to randomly inspect any suitcase. If you have a TSA approved lock, they are able to unlock your luggage, inspect it, and then just lock it up once they are done. If you don't have such a lock, they will open up your suitcase forcefully, which means that there is a possibility they could damage it beyond repair. And if anything can ruin your summer vacation, it's finding out that your luggage is in pieces.

The particular lock on the Air Force 1 luggage is a three-digit combination lock. You can set up the combination yourself (you should receive detailed instructions on how to do this with your suitcase), and the original combination is usually 000 or 999. When you wand to lock up your suitcase just insert the zipper pullers into the teeth of the lock, and change the numbers on the lock to something completely random.

The lock will keep the bad guys out, but still allow the good guys in, and you will have peace of mind knowing your belongings are completely safe. 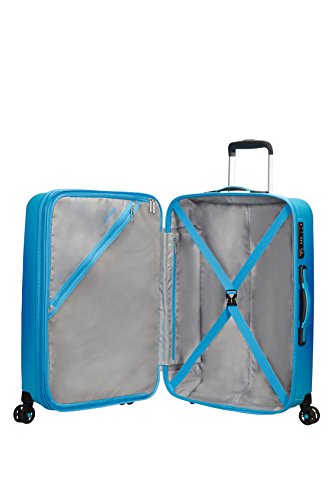 Inside The Air Force 1 Luggage

The interior of any suitcase is arguably its most important part. Everything else side, this aspect of the luggage is what is either going to make packing a breeze, or turn it into a nightmare. And these particular suitcases were built to make packing as easy as possible.

First of all, you get a full panel divider in the top compartment, which I am a huge fan of. It will ensure that everything stays in the exact same place where you put it, and it will help your suitcase look neater in general. Additionally, there is a single zippered pocket on this divider, which you can use for any smaller items. I generally use these pockets for swimwear and underwear, since I like to keep those items separate from my other clothes.

The bottom compartment is equipped with elastic cross ribbons, which is pretty standard. There is also one small zippered pocket in this compartment. In addition to that, the Air Force 1 suitcases have expandable capacity, which will certainly come in handy on longer trips. Or if you tend to do a lot of shopping while you are away, and then struggle to fit everything inside your suitcase.

Overall, these American Tourister suitcases will allow you to organize your stuff pretty neatly. Which is important if you're one of those people that live out of their suitcases while they are away. 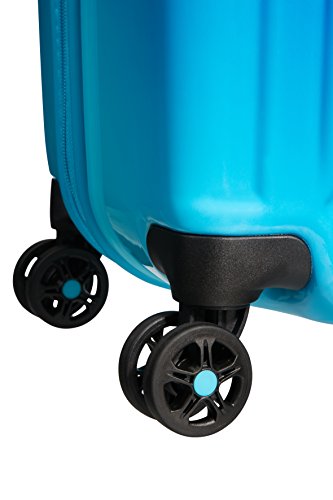 American Tourister Air Force 1: A Force To Be Reckoned With?

In my opinion, they are certainly a force to be reckoned with. Especially when you consider their prices – these American Tourister suitcases are a rare example that you can get durable and functional luggage at an affordable price.

Of course, I didn’t love everything about these suitcases – they would be much better if they featured a wheel handle that can be locked to several different heights. That way, all travellers could make it fit their own height perfectly. But that is pretty much the only issue I have with the Air Force 1 luggage.

And I am willing to overlook that downside, precisely because the other features that these suitcases are equipped with. The recessed TSA approved lock, the double spinner wheels, the full panel divider inside, the expandable capacity…

And most important of all, the incredibly lightweight, ombre shell. 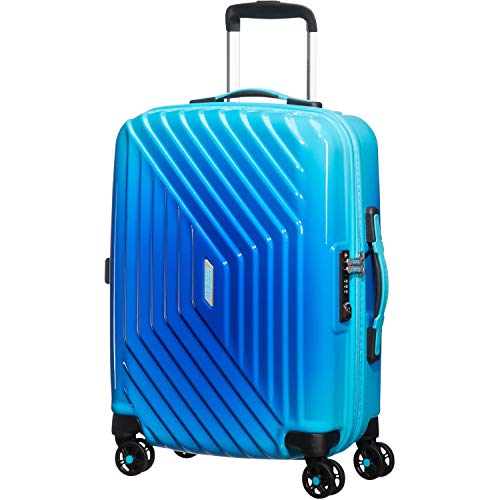 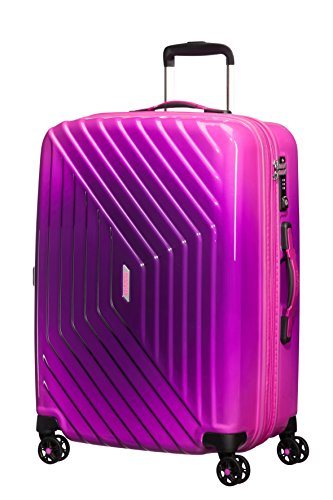 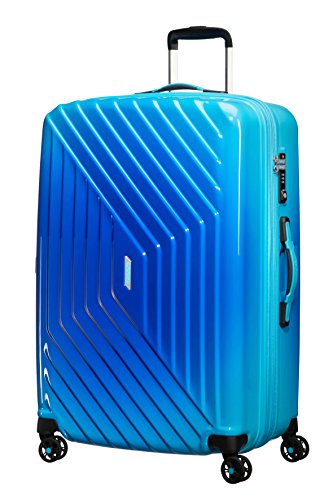 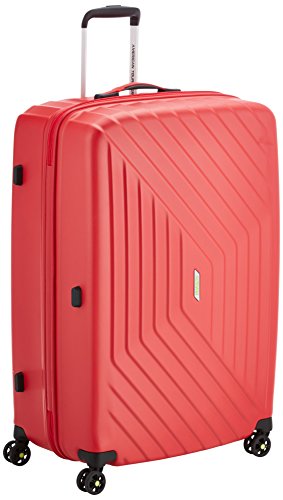 If you are looking for an affordable suitcase that will stand up to the test of time, then the Air Force 1 is the perfect choice for you. You can choose between several different colors, all of which look pretty awesome. And which will definitely help you identify your suitcase on the luggage carousel in just a few seconds.

If you also loved these American Touristers, head over to Amazon. I think you’ll be surprised when you see how much they cost – I know I was!