You’re planning a vacation on the Hvar island this summer and looking for the best beaches to check out? Look no further – we will show you the 10 most beautiful beaches in Hvar and the surrounding islands right here.

Idyllic beaches, secluded beaches and famous and even nudist beaches – they’re all here. And regardless of the type that you’re looking for, you can be sure of one thing – the sea will be crystal clear and azure blue at every corner of the island.

One thing to have in mind is that you won’t find long stretches of sandy beaches on Hvar. Because of the island’s topography, most of the best beaches are in bays and lagoons.

Below is a map of all the locations (as accurately as I could portray them) on and around Hvar Island.

If you like privacy, then this is the beach for you. It is on the northern part of the island and very secluded, and so it doesn’t get too populated with tourists in the summer. It’s a 15-minute drive from Old Town to the Maslinica Beach, or an hour-and-a-half-hike. If you’re staying in Jelsa or Vrboska, the beach is even closer.

It’s a rock and pebble beach with a mildly steep entrance, so it’s suitable for children. The beach is actually in a bay, and it is surrounded by trees and rocks. You can always find a spot for your towel on one of the rocks, if you want even more privacy.

The sea is a stunning turquoise color and clear enough that you can see the sea bed for meters ahead.  And thanks to all the trees, there’s plenty shade on the beach. 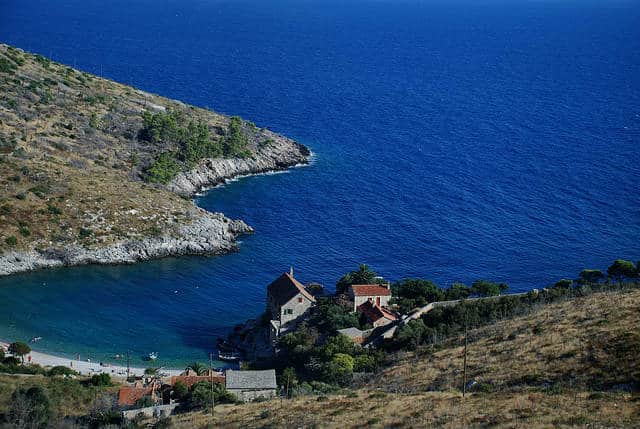 This lagoon beach is on the southern part of the island. You can reach it by boat and by car – but it’s still a 10-minute downhill walk away from the nearest parking. There’s a bar and a restaurant on the beach, so you don’t have to bring any refreshments or food if you want to spend an entire day here. But you would need to bring loungers and umbrellas – you can’t rent any, and there’s barely any shade on the beach.

Dubovica is a pebble beach, and it is fairly secluded, so it doesn’t get too crowded even in peak season. Especially because it’s not really in the main town area, and you do need to put in some effort to get to it. Because of that it’s great for couples, or people who just want to be away from the crowds.

The sea here is very calm, and there’s barely any waves. And because the sea is very deep here, you can also enjoy diving.

This beach is also on the southern part of the island, and it’s actually pretty close to the Dubovica beach. It’s also pretty close to the the Red Rocks of Hvar – a diving spot that can only be accessed by a boat or a kayak. But definitely worth it, thanks to the rich marine life.

The beach is a bit hard to find – you have to drive down unpaved roads, through an olive field and past an abandoned villa. And people often confuse it with the beaches in the Zarace area – those beaches are west from the Dubovica Beach. The beach that I’m talking about here is east from Dubovica – the difference is huge if you’re looking for privacy and seclusion.

This is a small pebble beach with some concrete blocks, surrounded by nature. And it’s one of the few spots on the island where you can actually be alone in the middle of July. There’s virtually no shade, so definitely bring an umbrella if you plan to spend an entire day here. 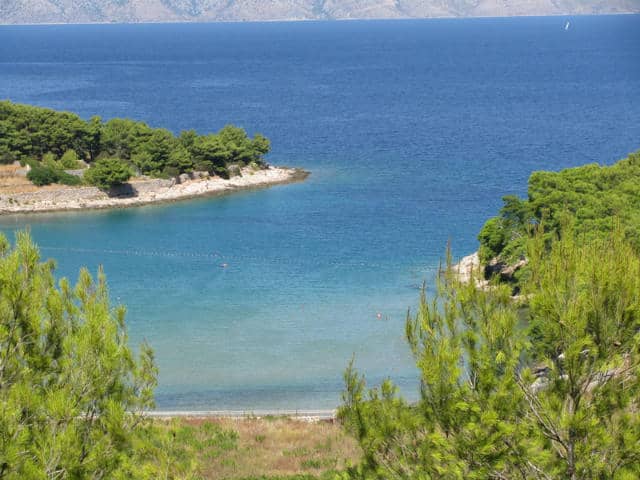 Back to the northern part of the island – Grebisce is one of the few sandy beaches of the island. It is in Jelsa, and there are actually two beaches in the bay – Velo Grebisce and Malo Grebisce. And in between those two beaches there’s an auto camp – just perfect if you’re planning on visiting Hvar in an RV.

The beach is suitable for children and people who aren’t strong swimmers, as there are several shallow-water patches in the sea. But it’s also a good option for snorkelling, because the marine life is rich and the sea bed is stunning – you just need to swim away from the shore.

There’s lots of trees above the beach, and there’s also a café pretty close. However, because of the auto camp it does get crowded in high season – so not a great beach if you like privacy. But if you like meeting new people and don’t mind the crowds, then it’s an awesome choice.

The best beach that is actually close to Hvar town is Mekicevica beach. It’s in a bay, and you reach it by boat or by foot. It is about an hour away from the town – you can hike through the forest, or walk along the coastline. Whichever you choose, it will be completely worth it.

It is a rock and pebble beach, and it’s a great spot to get away from the crowds in Hvar town. You can rent loungers and sunbeds, or you can just put down your towel. I would recommend that you bring an umbrella if you want to spend an entire day on the beach, since there’s not too much shade. There are some trees on the beach, but mostly it’s shorter shrubs and bushes.

There is also a restaurant with rave reviews a short hike away from the Mekicevica beach – perfect for refreshments and lunch. And there’s a small beach just below the restaurant, so you can actually get a drink and sit next to the water. 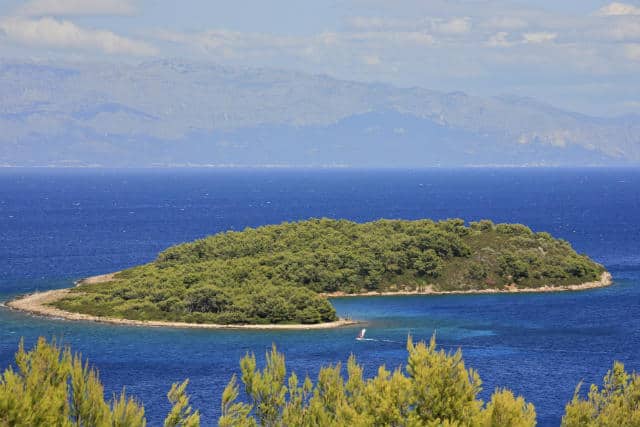 Just across the northern side of Hvar Island, you’ll find the Zecevo Island. A tiny little island in the Adriatic Sea that you can reach by boat from Jelsa or Vrboska. If you’re a nature lover, then visiting Zecevo is a must – there’s nothing else on the island, apart from the beaches and pine forest.

But not for long. There’s actually some controversy surrounding the island, as it appears that the government sold a part of it to owners of an elite party club. It’s sad to think that, in just a few years, the untouched pine forest could be transformed into a luxury private resort.

Because the island is so secluded, it’s pretty popular with nudists. So, if you’re not a fan of tan lines and are looking for nudist beaches, Zecevo island is the best spot for you.

On the southern part of the island, there’s a small settlement of Sveta Nedelja. West from it, you’ll find the Lucisca Bay. It is not that easy to reach – you have to drive on unpaved roads, park on the side of the “road”, and walk for about 10 minutes down a cliff. That means that most people won’t even try to get to this beach, so you can expect privacy.

It’s an amazing beach if you want to be alone. And because the cliffs that lead to it are pretty tall, there’s plenty of shade. This is a stony pebble beach, surrounded by trees, rocks and bushes. A truly mesmerizing naturist beach.

Which also means no amenities – you can’t rent anything on the beach, and there are no restaurants nearby. If you plan to spend an entire day here, make sure to bring enough food and drinks. 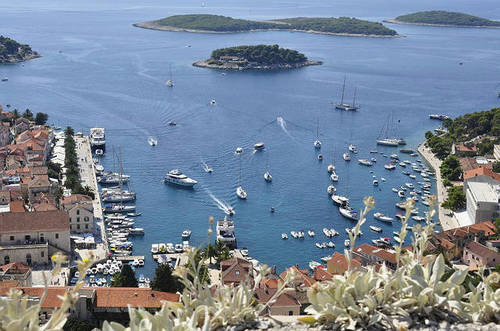 View of Paklinski Islands from Hvar

Paklinski Islands are just a boat ride away from Hvar. If you’re looking for some stunning Instagram backdrops, they are totally worth your time. It’s pretty easy to reach them – there are multiple organized tours of the islands that depart from Hvar Town. And you can also get a ride on a boat taxi, if you’d rather go alone. 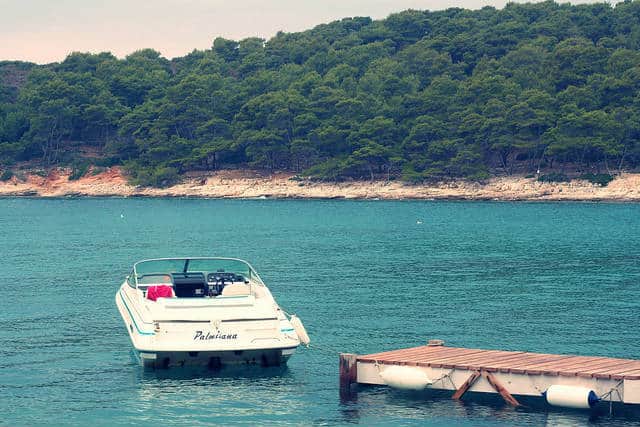 Palmizana is one of the most popular tourist destinations in the area, so expect crowds. It’s a nautical marina with crystal clear azure sea, several waterfront restaurants and bars, and a long sand/pebble beach.

You can find all the amenities you could need on the beach, so you don’t really need to bring anything. There are parts of the beach that are surrounded by trees, and covered in shade, in case you don’t want to rent loungers and umbrellas.

There are organized boat tours to Palmizana, so it tends to get pretty crowded in high season. But take a short walk along the coastline, and I’m sure you’ll be able to find a peaceful spot.

The marina close to the beach is worth seeing, especially if you like boats. And if you’re an adventurer, you can always go on a hike across the Sveti Klement Island, in search of a slice of seaside heaven. 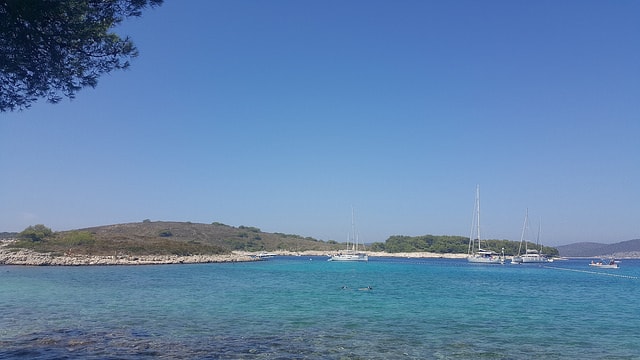 View of Mlini beach, courtesy of Katerina and Vassilis Last

Not to be confused with the Milna beach on the Hvar Island, the Milni Beach is a 10-minute boat ride away from Hvar Town. It is on the Marinkovac Island, and the easiest way to reach it is by a boat taxi, but you can also rent one. It’s the most economical option, if you’re with a group of friends. And it’s fairly easy to navigate to this beach.

But come prepared – the sun is pretty strong here, and there’s not much shade on this pebble beach. You can rent loungers, though, or bring your own.

Since there is plenty of boat tours to this beach, it can get pretty crowded. It’s best to early in the morning, if you want to find a good spot before the crowds arrive. And if you plan to spend a day on Milni, you’ll be happy to know that there’s an open-air restaurant on the beach.

On the other side of this tiny island, there’s a party beach. Our recommendation is to avoid it – the vast majority of the beach is covered with loungers from the Carpe Diem bar/restaurant. And the bar has terrible reviews, so your best bet is to stick with the Milni beach. 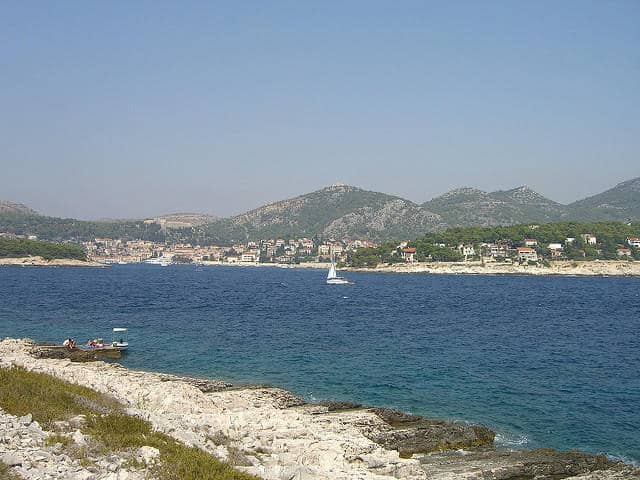 View of Hvar from Jerolim Island, courtesy of PrettyKateMachine

Jerolim island is the closest island to Hvar, and only a 5-minute boat ride away from the town. It features one of the best nudist beaches in the area. However, despite the giant Nudists Welcome sign that greets you when you enter the beach, there’s still a lot of people in swimsuits there. But it is a pretty long beach, so you will be able to find a spot where you’ll have total privacy.

This is a rock/pebble beach surrounded with trees, which provide lots of shade. And there are loungers and umbrellas you can rent, if you don’t want to bring your own. If you go here off season, there’s a good chance you’ll be all alone.

If you’re in the mood for some party, there’s a huge beach bar on Jerolim. But it’s bad news – the Carpe Diem beach bar/restaurant on Jerolim has the same reputation as the one on the Milni beach. Good cocktails and beer (as long as you don’t mind the rude staff), but terrible and overpriced food. 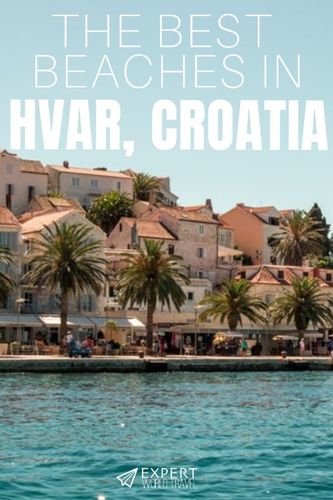