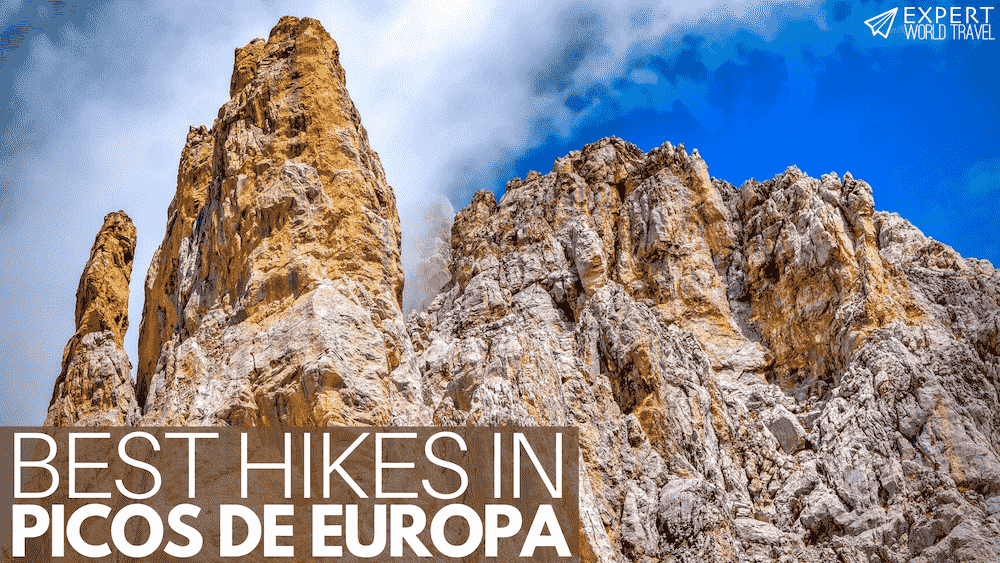 If you’re wondering where the Picos De Europa is, I don’t blame you as I had never heard of them until I drove past them and asked ‘what are those’. The Picos De Europa is in northern Spain about 25 km from north Spain’s coastline and it sits across 4 regions including Leon, Castille, Asturias, and Cantabria.

Picos De Europa is a national park and a UNESCO Biosphere Reserve as it’s home to numerous protected species including the Cantabrian Brown Bear, Iberian Wolf, and lots lots more. Though your chances of seeing the bears and wolves are minimal, it’s nice to know they are there.

The area, which is a part of the Cantabrian Mountains was named “Picos de Europa” or “Peaks of Europe” because sailors coming to Spain could see the mountains from the sea and it would be their first sight of the continent when sailing from America.

The Picos de Europa National Park is stunningly beautiful with deep valleys, gorges, rivers, lakes, and of course quite a few mountain peaks, the highest being Torre de Cerredo at 2650 meters above sea level.

It’s a fantastic place to go rock climbing in but the best way to explore the area is by using the many hiking trails, and here are the best hiking trails in Picos de Europa. Some of them are tough, and some are easy, so you’ll find one for you no matter what your fitness level is. 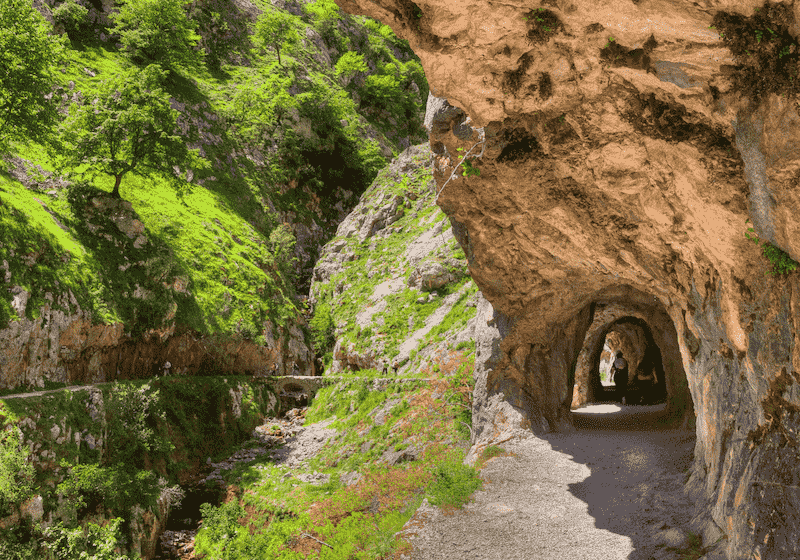 The hike is quite long and challenging and can be hiked as an out and back hike, or you can do one direction and be picked up at the other end if you arrange transport.

The trail begins at Poncebos, in Asturias and it then follows the Cares River going through the Divine Gorge all the way through to Caín, in León.

Along the way, you’ll cross the Cares River a few times and feel like you’re literally walking through the Cantabrian mountains thanks to being in the gorge.

The route features some rocky terrain, some delightful bridges called bolín and chamois, and you’ll even see some small caves as you go.

The views along the trail are spectacular as you walk amongst the huge limestone mountains that surround the gorge along with cliffs, the river below, wildflowers, waterfalls, and more. You might even meet some mountain goats along the way.

This hiking trail also connects up with lots of others so it can work as a great starting point if you wanted to spend more than a few days in the Picos de Europa National Park.

One of the best hikes in the Picos de Europa National Park is the Covadonga Lakes circular hike and it’s an easy one that can be enjoyed by the whole family.

At just over 4 miles, it’s quite a short hike and there is barely any elevation change, as it’s mostly flat so it won’t take more than 3 hours of hiking but you should definitely plan some stoppage time for taking in the amazing views. It’s also a very popular hike so don’t be surprised to find some traffic on the trail.

The hike begins at Buferrera car park where there is a stunning view across the valleys and mountains. As you walk the circular route you will find some even better viewpoints namely Principe and Entrelago.

The trail goes through a stunning Palomberu beech forest and through the open meadows of the Vega de Enol and of course past the three lakes of Covadonga which includes Lake Enol first after which you’ll see Lake Bricial and finally Lake Ercina before returning to the car park.

If you’re with kids you can shorten the route by taking a detour behind the Mosquital mount missing out Lake Bricial.

The views along the way are stunning as you’ll have snow-capped peaks, see wild horses, and the reflections in the glacial lakes are fantastic.

Fuente Dé – Horcados Rojos is a 6.8 mile out and back hike that sits at some serious altitude in the Picos de Europa National Park.

To begin the hike you’ll first have to make your way to the Fuente Dé cable car and catch it all the way up to the top and this is where the hike begins, way up high on the peaks at 1800 meters above sea level.

When you get out of the cable car, you should take a moment to look around as the views are quite incredible.

A short walk from the cable cars and you’ll find the start of the trailheads and you’ll need to take the left fork and head up the wide gravel road.

It’s not an easy hike as it’s quite steep most of the way and you’re walking along loose stone and rocks, so hiking boots is highly recommended.

The trail is also very exposed to be sure to bring enough water and warm clothes, as there is no shade and no shelter from the elements if the weather decides to turn.

At the beginning of the trail, you’ll go past four lakes on your left periodically which sit in the valley and once you have continued following it for 2 hours you will come to the end of the trail and will have reached the peak of Torre de Los Horcados Rojos at 8,222 ft above sea level.

The walk back is again steep and slippery, make sure to take your time going downhill. The descent is quick and you should have it done in less than two hours.

The hike is a little the same all the way in terms of terrain but you’re standing on the top of Europe and will have some of the best views in the continent from this hike.

The Sotres To Refugio de Cabrones is a hike that is not for the faint-hearted but for your efforts you are rewarded with some absolutely amazing scenery.

You should not attempt this hike if you’re not fit enough. There are some very tough moments and you’ll have to climb in some sections to keep on the trail.

The hike begins at Sotres where you will find a hotel and place to park your car. From there you can walk down the hill you drive up on until you find a track framed with trees that makes a stunning path.

Eventually, the pretty trail joining the road that takes people up to Pandebano pass. You’ll see some stunning hills with lots of pretty cows and great views back to Sotres on one side and Bulnes on the other.

If you’re hiking on a weekend, expect to see some crowds as it’s a very popular trail.

Once you get over the hills you will see your first view of the peak of Urriellu and then you’ll go past the Tenerosa refuge where the trail starts to get steep and the ascent begins to the Urriellu refuge. You are likely to share the path with some goats at some point.

From hear the trail gets tough but the path is obvious so there is no chance of getting lost. You’ll see some amazing views along the way that even reach the ocean and slowly you’ll start seeing Urriellu and eventually reach the bottom of it and get to the Urriellu refuge where you can rest and get some water.

From the Urriellu refuge, you climb a simple path to Corona del Raso where you’ll have to use your hands to get up the exposed path. Be very careful as this is part of the hike where if things go wrong, you can die.

After this, the path takes you into the massif to Jou de Los Cabrones past Jou del Agua. When you eventually reach the Refugio de Cabrones and can have a rest staring at the peaks of Los Cabrones and Torrecerredo.

You’ll need to spend the night in the refuge and then continue on your adventure from there depending on your plans.

It’s an amazing hike, but again, if you can handle it. 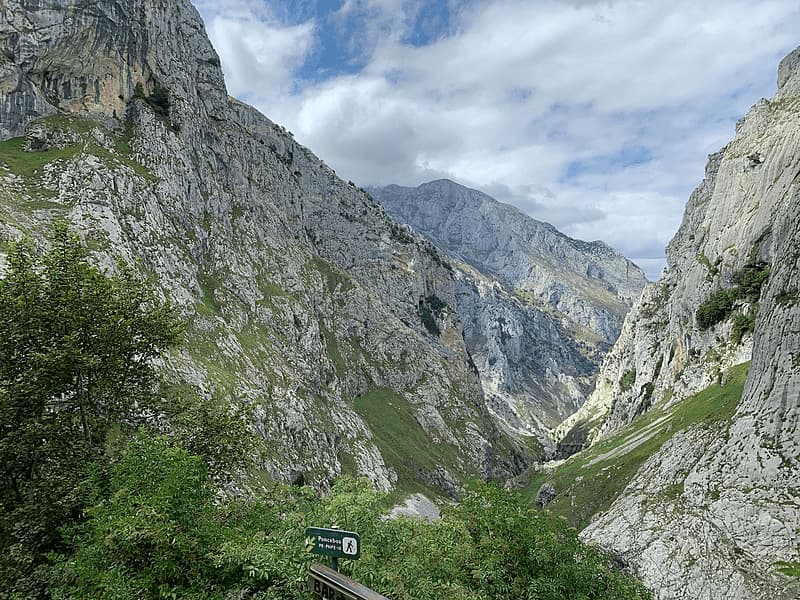 The Bulnes Urriellu Refuge to La Terenosa Refuge is a loop hike that is not for the faint-hearted either, like a lot of the hikes in the Picos De Europa.

The hike has some stunning views flowing ridgelines and ducking into valleys and back up onto ridgelines again. The scenes are incredibly dramatic and worth the effort and risk it takes to get around the loop.

The hike is 11 miles long with an elevation change of over 5000 feet and you’ll reach a maximum elevation of 9,300 ft as you go, so don’t go from sea level to this hike, spend a day in some altitude first.

It should take you around 10 hours maximum 12 hours if you’re going slow, so leave early so that you’re not hiking in the dark on your way home.

The hike begins at Bulnes and takes you on an ascent Vega de Urriellu and the refuge. This ascent is easy and the path is well laid and the steepness very manageable.

It’s a stunning climb as you slowly move up and over the clouds sometimes while feeling the mist flowing over your face.

Once you’re past that and have followed the ridgeline and seen amazing views over the park, you have to descend which can be very hard if it’s through the clouds. It’s very technical.

Once you reach the channel of Camburero and finally Balcosin, things get complicated again as you’re met with very slippery stones and steep passes. You’ll even find thick cables put in place to help you get down safely, it’s that hard.

After that, it’s a love walk down the ridge back to the starting point.

Be warned, this trail is very exposed and you need to be prepared for the weather, rain, or shine. Water and warm clothes and a hat are a must. Also, do not attempt this hike in winter as it’ll be closed with snow.

The Bulnes – Camarmeña from Funicular hike is one of the best hikes in the Picos de Europa National Park if you want some of the greatest views in the park while using minimal effort.

The hike begins at Poncebos from which you hop into the Funicular (cable car) which takes you all the way up to Bulnes, making the ascent about as easy as possible.

First, you’ll hike up around Bulnes on a very clear path and then you’ll begin reaching the ascent to the top which will have you climbing over 1000 ft in a very short time, so the path is very steep.

Once you’re at the summit, you will have a fantastic view of Torre de Cerredo, the highest peak in the Picos de Europa National Park, towering in front of you at 2650 meters high.

At this point, you follow the path back down to the cable car, and if you’re feeling lazy, you can catch it back down, but you’d be missing out on a lot as the hike down is stunning.

As you walk back down, you’ll follow a very clear, wide, and easy path enjoying views of the Picos de Europa National Park. The path follows the ridges of the mountains, so you’re always high up with great views and you also get to walk back through some steep valleys.

It’s a great hike that has been compared to the Cares Gorge which is renowned as one of the best hikes in the Picos de Europa National Park.