Tennessee is a landlocked state in the southeastern United States. Its diverse topography includes part of the Appalachian Mountain range in the east and a topographical dome in the middle. The western portion sits within the Gulf Coast Plain.

After agriculture, tourism is the state’s most important industry, and the capital city of Nashville is famous internationally for the music and entertainment industry.

Along with Nashville, Tennessee’s state and national parks and scenic hiking trails have earned it the position of one of the nation’s top 10 tourist destinations. The Great Smokey Mountains National Park is actually the most visited in the US, and it’s one of the few with no entrance fee.

Visitors flock to Tennessee for outdoor adventures all year long. The winters are cold enough to support a few ski resorts in the mountains. The summers aren’t quite as hot and humid as the deeper south, and the spring and fall seasons are divine.

Tennessee has a total of 1,393 lakes. Most of them are manmade reservoirs created by dams to provide hydroelectricity and drinking water. The lakes are in beautiful settings providing serene getaways with plenty of outdoor recreation. Here are 10 of the best lakes to visit in Tennessee.

Cherokee Lake is a reservoir created by the construction of the Cherokee Dam on the Holston River. Its name is derived from the Cherokee Native American tribe that is prominent in the area. With a surface area of 30,200 acres, it’s one of Tennessee’s largest lakes. It’s situated in the Clinch Mountain foothills about 30 miles east of the greater Knoxville area.

The lake is surrounded by green farmland, rocky bluffs, and mountain views. Favorite activities include swimming, sunbathing, boating, hiking, and horseback riding. The Tennessee Wildlife Resources Agency works to install fish attractors in the lake particularly to increase the production of smallmouth bass.

The Panther Creek State Park lies along the shoreline and features picnic spots, campgrounds, boat docks, and a total of 17 hiking trails. Cabins and vacation rentals are available. 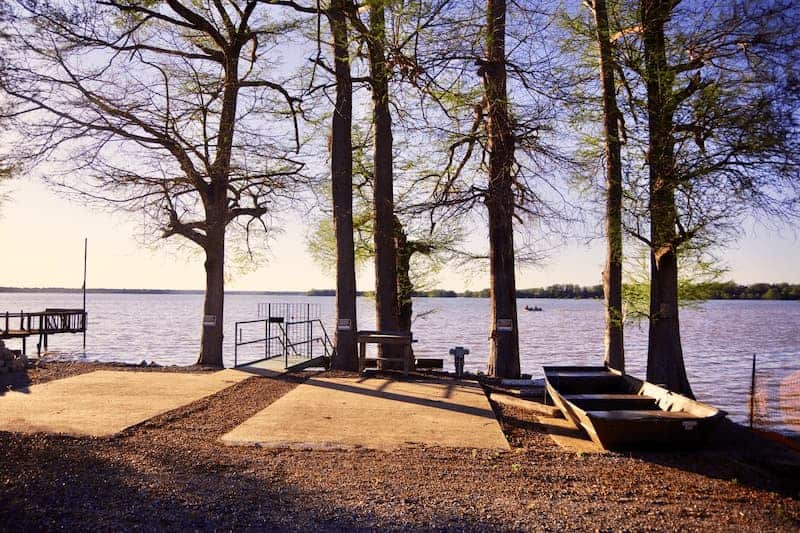 Reelfoot is the only sizable natural lake in Tennessee. Covering 15,000 acres, it’s located in the northwest corner of the state. It was named after a local Indian Chief who had a deformed foot. The lake is rather shallow and swamp-like with bayou ditches connecting basins and bald Cypress trees.

The largest basin is called the Blue Basin. Water levels have been partially regulated by a spillway constructed at the lake’s south end since 1930.

The lake lies within the Reelfoot Lake State Park which is popular for hiking and wildlife watching. Bald eagles, birds of prey, and migratory birds are often spotted. The 280-acre park features camping, cabin rentals, and picnic shelters. Up until 2003, it was the only lake in the world where fishing for crappie was legal. Crappie was served in the local restaurants.

Formed by the Old Hickory Lock and Dam, Old Hickory Lake stretches over five counties in north-central Tennessee. It’s located on the Cumberland River about 25 miles from Nashville. The dam and lake were named in honor of President Andrew Jackson who bore the nickname “Old Hickory.”

President Jackson once lived in the vicinity. The town of Old Hickory, a part of the Nashville metro area, is on the south side of the lake making the lake a popular day trip for city dwellers.

The dam and lake were created by the US Army Corps of Engineers between 1952 and 1954, and the Corps still oversees the operation of all facilities including the two campgrounds, eight public marinas, and 41 boat ramps. Boating, fishing, swimming, jet skiing, kayaking, and paddleboarding are popular activities at the lake.

Chickamauga Lake is a 36,240- acre reservoir with a 784-mile shoreline. It’s situated along the Tennessee River between Watts Bar Dam and Chickamauga Dam. The lake is named after the Chickamauga, a Native American tribe that broke away from the Cherokee Nation in the 1700s.

The lake is operational from March to August when the water level is at its highest. Full pool is 682 feet above sea level and drops to 676 feet at the end of November.

The lake is popular for swimming, boating, water skiing, and jet skiing. Most recreation takes place at the south end of the lake Eight Parks and two wildlife centers are located within the park with plenty of camping and hiking opportunities. 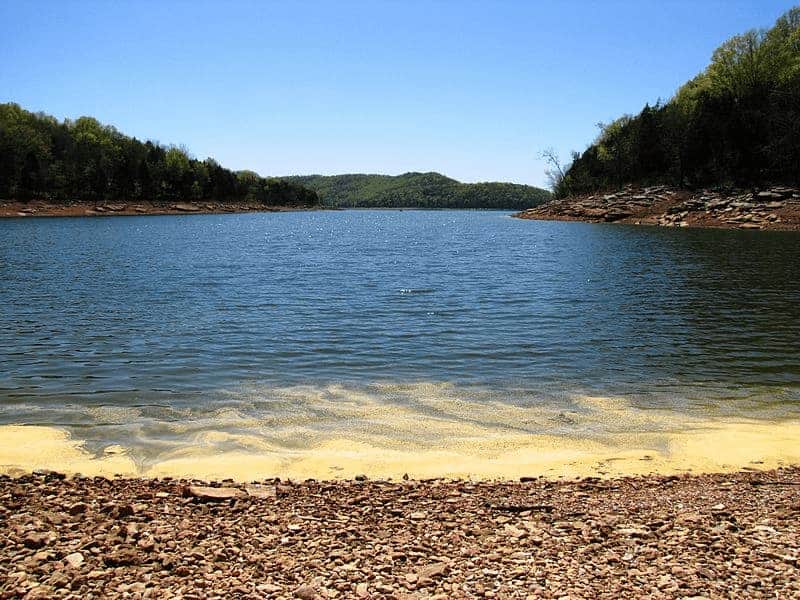 Located in the middle of the state near the town of Smithville, Center Hill Lake is a reservoir originally created in 1948 for hydroelectricity and flood control. It is still used for flood control. The 18,220-acre lake is fed mainly by the Caney Ford and Falling Water River tributaries.

It has a shoreline of 64 miles with upper-middle-class vacation homes lining some of it. The rest of the shoreline is occupied by Edgar Evins, Burgess Falls, and Rock Island State Parks.

Center Hill is a popular lake for fishing. Visitors enjoy lots of other recreation including boating, canoeing, picnicking, or simply strolling the picturesque shoreline. The parks have a variety of camping options. Visit the Center Hill Lake Information Center for a pictorial history of the dam and lake and a wildlife exhibit featuring local floral and fauna.

Surrounded by the lush Cherokee National Forest, Watauga Lake is a reservoir created by damming the Watauga River in 1948. Construction actually began in 1943 but was halted during World War II. The entire town of Butler (population 600) had to be relocated to higher ground to create the lake. Today, Elizabethton, located to the east of the lake, is the nearest city.

Watauga Lake has a surface area of 6,430 acres at full pool which occurs during the summer. The shoreline is 104.9 miles long. The distant, time-worn Blue Ridge Mountains together with forestland provide a picturesque backdrop for Watauga Lake. Recreational activates include swimming, fishing, boating, waterskiing, camping, and hiking the nearby trails.

Pickwick Lake is located in Tennessee’s western region on the Gulf Coast Plain. It has a surface area of 47,500 acres, is 53 miles long, and has a shoreline of 496 miles. Its maximum depth is 53 feet. It was created by Pickwick Landing Dam. The north end of the lake serves as a transportation route to the Gulf of Mexico.

About 40 percent of Pickwick Lake’s shore is developed is owned privately or by the Tennessee Valley Authority. The rest of the shoreline is undeveloped. Pickwick Lake State Park is also located on the shoreline. The lake is popular for fishing, boating, water skiing, and jet skiing. It’s been called the “best trophy smallmouth fishery in the country.” 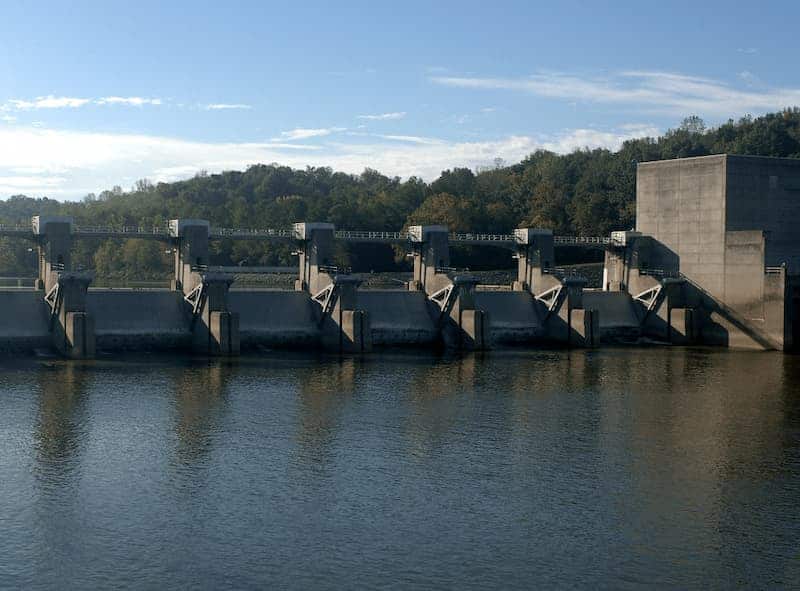 Cheatham Lake was created by the building of the Cheatham Dam by the TVA. The 7,450-acre lake is 65.7 miles long and has a shoreline of 320 miles. It flows from the dam through Nashville to Old Hickory Dam and Ashland City. Today, the lake is owned and operated by the Corps of Engineers.

Around two million visitors come each year to fish and frolic on Cheatham Lake. All sorts of watersports are popular including boating, sailing, waterskiing, and tubing. Anglers come to the lake to catch largemouth bass, walleye, catfish, white bass, and more.

There are no fishing piers, but bank fishing is available on the downstream sides of Percy Priest and Old Hickory Dams and at the public boat ramps. The Cheatham Dam Right Bank Recreation Area features a favorite swimming beach. Restaurants and a marina are close by.

Norris Lake is an artificial lake created by the local Tennessee Valley Authority in 1936 as a way to produce power in the region. The lake covers a total of 53.875 sq mi (137 km2) and offers visitors a way to fish, swim or boat. It is located in the Great Valley in Eastern Tennesse near Knoxville. Norris Lake features forest, rock formations and hills which also offer lots of outdoor opportunities.

Dale Hollow Lake is a reservoir created for hydroelectric power and flood control in 1943 by damming the Obey River. It’s located on the Kentucky/Tennessee border and lies within three Tennessee counties. The lake has a surface area of 27,700 acres and 620 miles of shoreline.

Additionally, it provides summer fun for boating and swimming and great fishing all year. It’s a top spot for catching smallmouth bass and holds the world record for the largest fish caught of that species.

Water skiing and tubing are popular activities at the lake. It’s surrounded by affordable lodging, restaurants, and cabin rentals. For visitors looking for more seclusion, there is primitive camping on Geiger Island that sits within the lake. A marina offers boat storage and boat rentals.

Percy Priest Lake is a city lake situated in the heart of Nashville. It’s a reservoir lake created by the J. Percy Dam and completed in 1967 by the Corps of Engineers. Around seven million visitors come to the lake each year for a quiet place to escape the city. It’s a popular lake for swimming with six spots to choose from within 40 miles.

Visitors can also go for a sailing tour on one of the River Queen Voyages or rent a paddleboat. For more summer fun, the nearby Nashville Shore features waterslides, pools, and a sandy beach on the shore of the lake.

Hunting and horseback riding are popular activities in the off-season.

Of course, there a lot more lakes we could have put on the list of the best lakes in Tennessee, but for now these are the ones we love!

How Many Lakes in Tennessee?

Tennessee is home to over 1300 lakes in total. Many of the larger lakes are actually reservoirs, with the only natural lake being Lake Reelfoot.

What Are the Biggest Lakes in Tennessee?

How Many Natural Lakes in Tennessee?

There is only one natural lake in Tennessee of any size and that is Reelfoot Lake. It measures 15,000 acres (52.6 sq km) in area.