The list of reasons why everyone should visit Greece at least once is a long one. The Mediterranean nation has stunning beaches and islands, amazing food, friendly people, and lots of fascinating museums.

The museums in Greece bring antiquity to life and showcase the inventiveness of the human race, the influence of Greek history on the rest of the world, and highlight its contributions to the birth of Western civilization.

In a place like Greece, museums are ubiquitous. In fact, some say the whole country is one huge museum. Use this guide to help you find the best museums to visit in Greece. 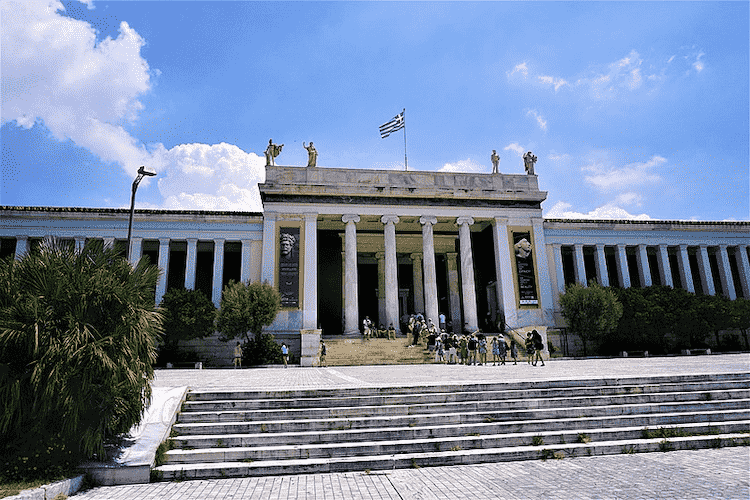 The National Archaeological Museum in Athens is at the top of the list of must-visit museums in Greece. One of the largest in the country, it was first established to house finds and artifacts excavated in the Attica region and later expanded to include exhibits from all parts of Greece.

Over 11,000 exhibits at the museum showcase a broad diorama of Greek civilization from prehistoric times to late Antiquity. The museum also houses an Egyptian and Near Eastern collection spanning from 5000 BCE to the Roman Empire.

Visitors to the museum find the imposing neoclassical building fascinating in itself. Inside, they marvel at eternal figures in marble, colorful pottery, reliefs of gods and goddesses, Mycenaean gold, and exquisite jewelry.

All of the artifacts fall into these major permanent collections: Prehistoric Antiquities, Neolithic, Cycladic, and Mycenaean finds, Sculpture works from the 7th to the 5th centuries, the Vase and Miniature Collection with works of ancient Greek ceramics, Metalworking, and Egyptian and Eastern works of art for, 5000BCE to the Roman conquest.

One of the best places to explore the world of ancient Greece, the Acropolis Museum is the newest high-profile museum in Athens. The architecturally impressive five-story building displays adorning riches from the Acropolis’s heyday including fascinating statues, sculptures, and 36 of the remaining 115 original frieze panels in Greece.

The Parthenon friezes feature exquisitely carved marble that represent the humanity of the divine such as the goddess Athena Nike fastening her sandal. A procession of ordinary citizens, soldiers, and priests march across the marble strip.

Admire exhibits and around 4,000 objects from the world-famous Acropolis archaeological site including sculptures that once adorned the historical sites located on the Acropolis. Objects of interest also include items the Acropolis inhabitants used in their everyday life.

The multi-level museum features a gallery of statues with glass walls to admire them in the natural light. On the lower levels of the building, you can see the ongoing excavations of an early Christian settlement through glass panels. And from the top floor, you’ll have great views of the sacred site.

The National Historical Museum is Greece’s largest museum and one of the most intriguing. Founded in 1882, it’s located in the building that the Greek Parliament occupied from 1875 to 1932. First existing to keep all the excavation finds from 19th century Athens, it slowly evolved to include finds from all over Greece.

The museum’s permanent collection chronicles Greek culture through the ages with memorabilia and personal items from famous historical personalities, authentic manuscripts, paintings, and Greek costumes and jewelry from the different regions of Greece. More than 11,000 displays represent the human progress of Greece from prehistoric times to Late Antiquity.

The NHM in Athens also has a display of artifacts dating back to the Ottomans’ capture of Constantinople in 1493 and from the period of the Greek Revolution. Be sure to see the “Antikythera” device in the exhibition hall. The prestigious logical instrument was used for calendric and galactic figuring during the first century BC and is a fine representation of early Greek technology. 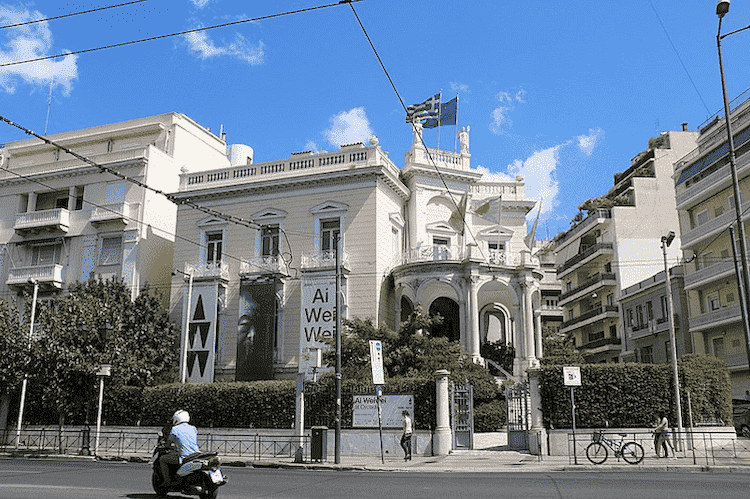 Go on a journey into the world of Cycladic culture at the often-overlooked Museum of Cycladic Art in Athens. Characterized by small simple and abstract ancient works of art and abstract marble figurines, Cycladic art dates back to 3200-2000 BCE making it even older than finds from Sparta or Athens.

Housed in an 1895 Neo-classical mansion, the museum features 300 magnificent 3,500-year-old masterpieces on display in the modern, well-lit galleries. The pieces are from the Nicholas and Dolly Goulandris collection. The couple, who began purchasing Ancient Greek antiquities and objects of Cycladic art in the 1960s, decided to permanently exhibit their collection in 1981. Today, the collection.

The MCA also has Cypriot Antiquities made of stone, bronze, silver, gold, clay, and faience as well as an Ancient Greece collection. Before leaving, dine on a delicious lunch at the onsite restaurant/gift shop.

Founded in 1914, the Byzantine & Christian Museum in Athens houses Byzantine and Christian art dating from the 3rd century to the present day. The building itself is also of interest. The Florentine-style palace is the former Villa Ilissa which served as the first capital of the newly-formed Greek state.

The museum contains about 25,000 artifacts including paintings, sculptures, frescoes, mosaics, rare photographs, pottery, fabrics, and ancient manuscripts. The artifacts are rare and well-preserved and reflect the Byzantine Empire’s influence and legacy. Some of the most significant pieces are the 13-century icons on display such as a mosaic of the Virgin Mary from Constantinople.

A visit to the Byzantine & Christian Museum east of Syntagma Square can be combined with a visit to the Athens War Museum next door. The museum has an onsite restaurant.

Established in 1979, the Macedonia Museum of Contemporary Art revolves around Alexandros Lolas’s donation of 30 works of art by internationally acclaimed artists. You’ll find this museum located in North Macedonia in the center part of the city that belongs to the International Trade Fair.

Collections and exhibits include over 2,000 works of painting, photography, sculpture, and engraving by Greek and foreign artists such as Mytaras, Zouni, Fassianos, Raynaud, Delacroix, Emo, Vakalo Skourtis, Moraïti, and Moralis.

The collections are either permanent, temporary or touring exhibitions. Visitors will also have the chance to see a few copies of small art objects from Picasso, Mytaras, Fasianos, and Modigliani.

The museum also makes publications available regarding contemporary painting, photography, sculpture, and monographs by Greek artists from the 20th century. Visitors can shop for jewelry and other decorative gifts at the museum and dine at a cafe on the ground floor. 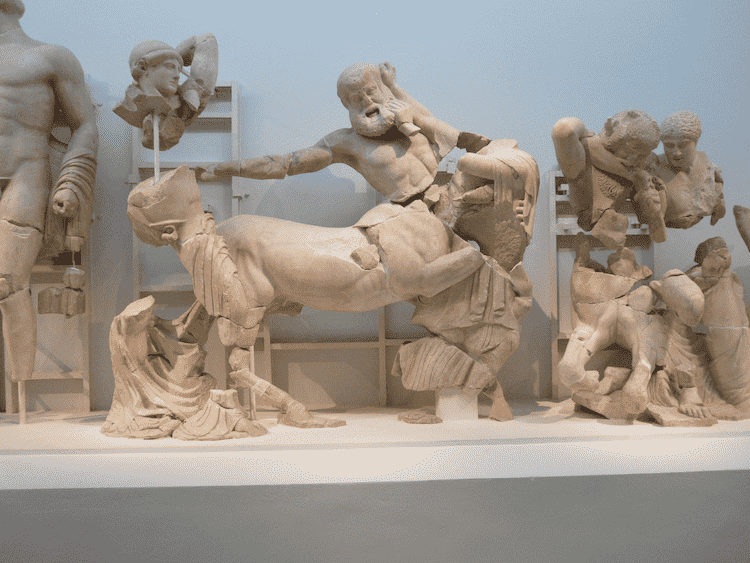 The Archaeological Museum of Olympia is home to many beautiful pieces of ancient classical art. Its historic location on the archaeological site of ancient Olympia, the sanctuary of Zeus, and the first home of the Olympic Games make a visit to the museum even more special.

The museum was established in the 19th century to display the finds of unearthings in Olympia. The first building turned out to be inadequate and a new gallery emerged in the mid 20th century. Of special interest is the magnificent Hermes of Praxiteles and the Temple of Zeus’ metopes included in the sculpture exhibit. Visitors will also get to see the famous sculpture of Nike of Panionios.

Today, the museum houses over 3,500 years of history dating from the time people settled in Olympia to Zeus’ asylum in the seventh century AD. Included are figurines of humans, animals, and weapons. The exhibits are displayed in order from Prehistoric to Roman times.

The Benaki Museum is an excellent Greek art museum established in 1930 and founded by Collector Antonis Benaki. It’s located in the Benaki family’s neoclassical mansion in central Athens near Syntagma Square and the National Garden. Several satellite galleries exist throughout Athens including the Toy Museum and The Ghika Gallery. Chinese and Islamic pieces are displayed in the satellite museums.

The collector and benefactor donated more than 35,000 works to the museum from his own collection. Pieces from around the world are housed at the museum including Greek paintings, Byzantine art, and Chinese porcelain. Ancient and modern Greek art is displayed over the mansion’s four floors. Of particular interest are the Mycenaean figurines from 1400 BC.

The terracotta pieces were found in tombs, shrines, and children’s graves across various settlements. Some religious artifacts are also on display at the museum along with weapons, books, musical instruments, and much more.

Opened to the public in 1975, the War Museum of Athens is devoted to the Greek Armed Forces and the history of wars in all eras. Collections include the historic arms of the Greek Ministry of Defense, artifacts from the Greek Army, and other civilizations such as Ancient Japan and Ancient China.

Operated by the military, the museum pays homage to all who fought for Greece’s freedom from ancient to modern times. Examples of weapons from all wars the country was involved in are highlighted. Arranged over two floors, the exhibits include personal letters, memorabilia, full uniforms, weapons, armor, and photographs. Outside in the courtyards, you’ll find aircraft and large artillery pieces.

Visitors to the War Museum can also view an engaging documentary film explaining the nature of all of the conflicts. The museum is located near Syntagma Square, and a visit can be paired with a viewing of the changing of the guard at the Hellenic Parliament.