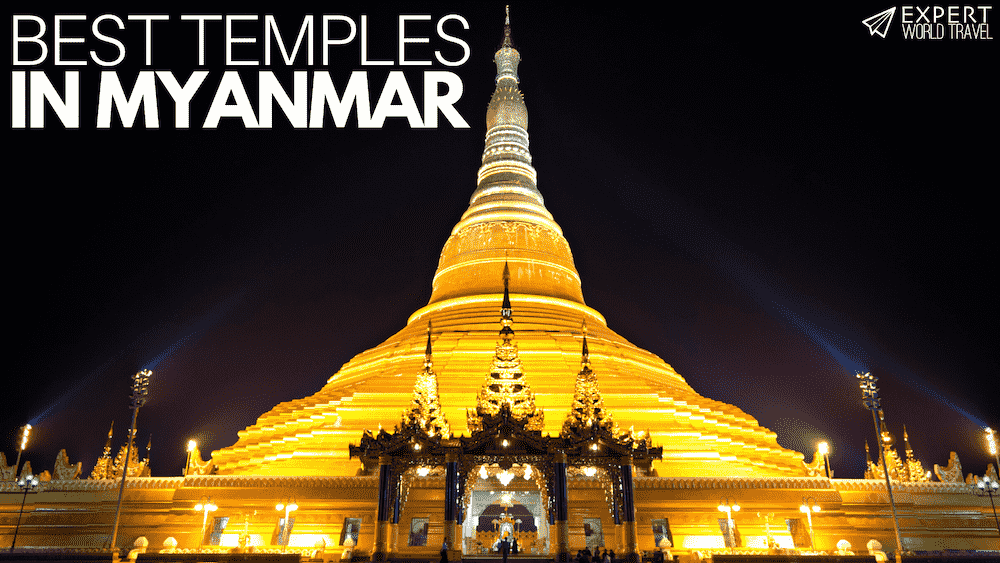 Planning a trip to Myanmar and not sure which temples to visit? You’re certainly in the right place then because this guide features only the best and most famous temples in Myanmar! 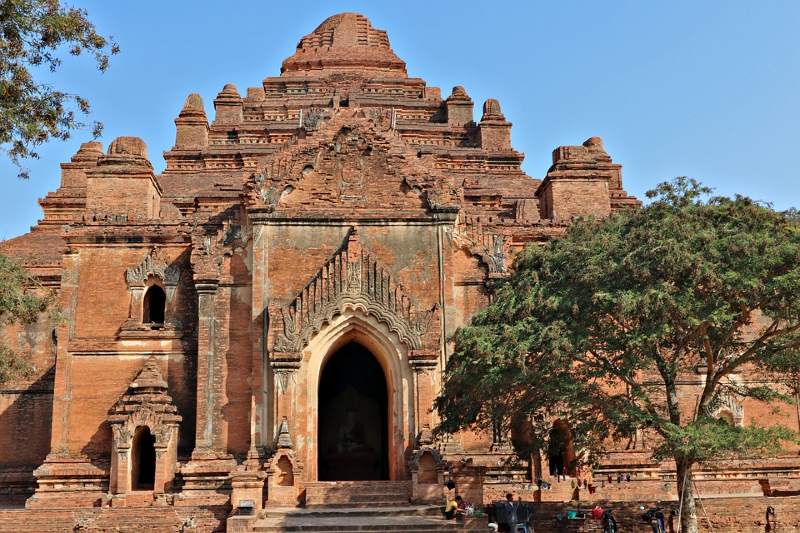 The huge temple features shrines, walkways, and lots of statues of Buddha, so plan to spend a couple of hours exploring the area. You can’t really explore the interior of the temple since it’s bricked up – the only accessible areas are the outer corridors and the four porches.

Head to the raised mounds at the edges of the complex to get great photographs of the temple, and also see it in all its glory – Dhammayangyi Temple is so huge that it’s not that easy to find a good spot that lets you see the entire place. 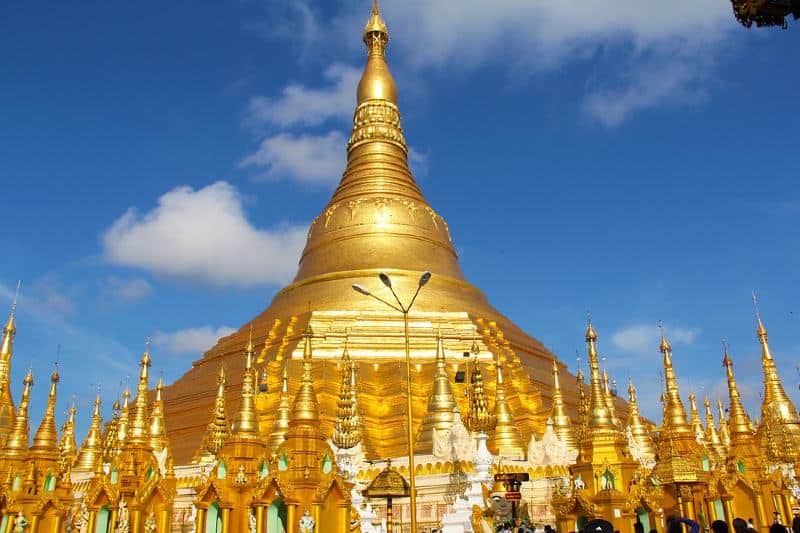 The Shwedagon Pagoda is thought to have relics of four previous Buddhas, which is why it’s the most sacred Buddhist pagoda in all of Myanmar. The relics are strands of Guatama’s hair, the staff of Kakusandha, Kassapa’s piece of robe, and Koṇāgamana’s water filter.

The 112-meter pagoda was built on Singuttara Hill that’s 51 meters tall, so the entire temple is about 170 meters above sea level. It’s the most prominent part of the Yangon skyline, and it’s going to stay that forever since the zoning rules of Yangon allow new buildings to be 127 meters above sea level at the most.

It’s thought that the Shwedagon Pagoda was built more than 2,500 years ago, and if that is true, it makes it the oldest Buddhist stupa on the planet. There’s no concrete evidence of this, but there are mentions of the pagoda in various historical writings, the earliest of which date back to 1362/63 CE. Later notes chronicle the gradual raising of the pagoda, and it’s safe to say that this is in fact the oldest pagoda in Myanmar, gilded stupa and all.

Sulamani Temple is one of the most frequently visited temples in Bagan, so it’s certainly one of the top Buddhist temples to visit in Myanmar. It’s a 12th-century temple built from stone and brick, featuring lovely scenic views, stunning statues, elaborate carvings, and beautiful frescos inside.

The sight of this spectacular Buddhist temple is best experienced at sunset when the stone exterior of the construction becomes saturated with the sky colors and emits a reddish hue.

This Buddhist temple was built during the reign of King Narapatisithu, and it is very similar to Thatbyinnyu Phaya, in terms of design. Sulamani Temple is so important that it was used as the model for the Htilominlo Temple, so be sure to make it a priority during your exploration of Bagan’s many of the most famous temples.

The scenic surroundings are another reason to prioritize the Sulamani Temple, plus it doesn’t hurt that it’s very close to lots of other, lesser-known pagodas and temples that you can quickly visit while you’re in the area. 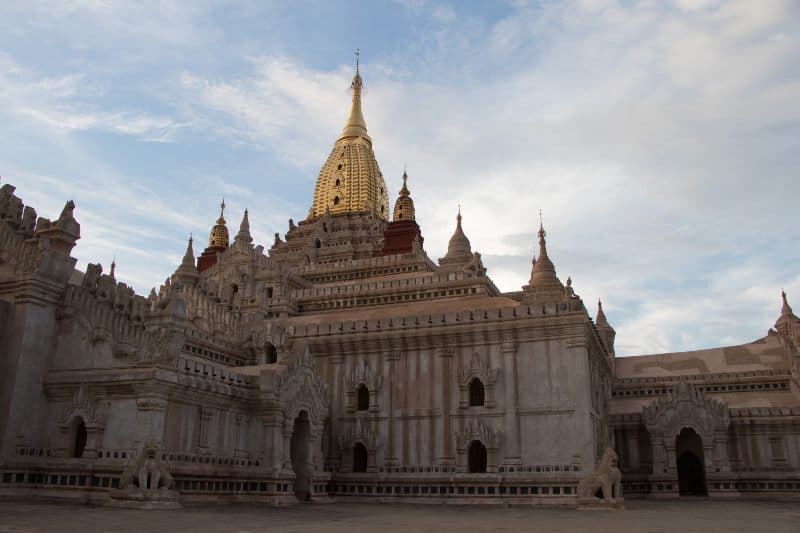 The Ananda Temple in Bagan was built back in 1105 AD, during King Kyansittha’s reign. It’s the home of the four standing Buddhas, each of which faces a different cardinal direction. The layout of this Buddhist temple is rather interesting because it is a cruciform featuring multiple terraces that lead to the pagoda, which sits at the top.

This Buddhist temple is considered an architectural wonder, and it’s even been dubbed “The Westminster Abbey of Burma”. What’s most intriguing about the Ananda Temple is the architectural style, which is a fusion of Indian and Mon styles. It’s absolutely fascinating, and easily one of the best temples to visit in Bagan.

Htilominlo Pahto is another spectacular Buddhist temple in Bagan. It is a three-story temple with a total height of 46 meters. This temple was originally built in the early 13th century, during King Htilominlo’s reign. It is most famous for four Buddha statues that all face different directions, as well as the red brick used in the construction of the temple.

Also, this is one of the most famous temples to visit in Bagan if you’d like to bring home some souvenirs from your trip to Myanmar. Countless market stalls line the perimeter of this Buddhist temple and you can’t get to the temple entrance without walking past them.

It’s also worth noting that Htilominlo Pahto is very close to about a dozen smaller Buddhist temples, making it the best place to go if you want to spend an entire day roaming around temples and discovering new pagodas. 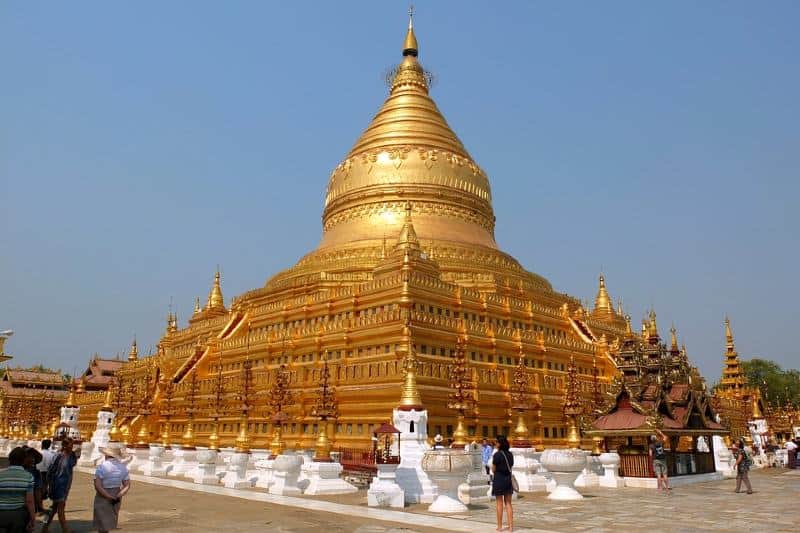 The Shwezigon Pagoda dates back to the 11th century, and it boasts one of the most impressive gold-leaf stupas to be seen in all of Burma. The carvings on the stupa are exceptional, and probably reason enough to come and visit this stunning pagoda.

It is believed that the Shwezigon Pagoda is where Gautama Buddha’s bone and tooth are enshrined, which makes it one of the most important pagodas in Myanmar.

At the entrance into the pagoda, visitors can observe statues of guardian angels. Also, this pagoda boasts four bronze statues of Buddha, as well as a shrine with 37 deified nats (god-like spirits) at Shwezigon’s outer limits.

The Shwesandaw Pagoda is insanely popular, especially as a sunrise spot, so be sure to time your visit to avoid the crowds. This temple dates back to 1057 and is a great place to see some of the most famous temples in Myanmar and enjoy some stunning green forest at the same time. The temple itself is a total of five stories high and towers over your head as your peer up at its magnificence. 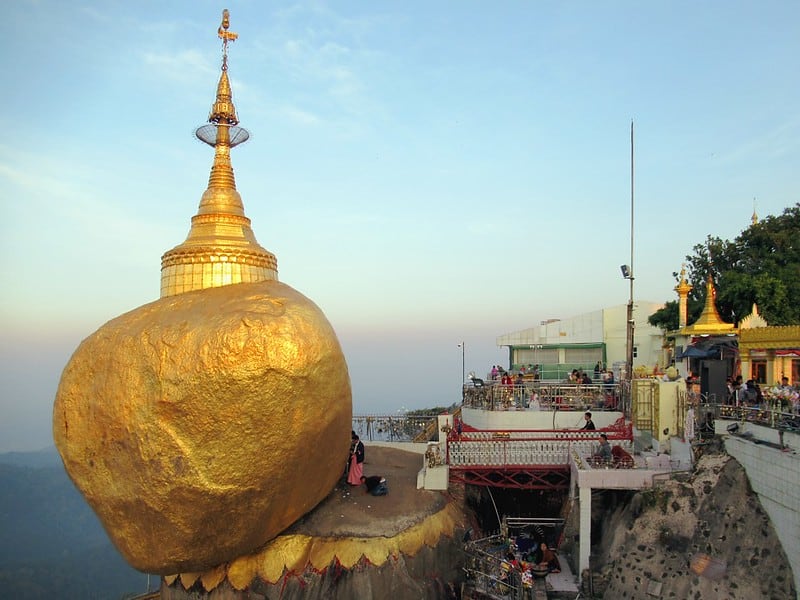 The Kyaiktiyo Pagoda is also known as the Golden Rock Pagoda is considered one of the most famous temples in Myanmar for altogether different reasons. It sits atop the Kyaiktiyo mountain at an altitude of 1,100 m (3,609 ft) towering above the surrounding hills. The construction is also quite unique in that it is actually a rock covered in gold leaf, balancing on the edge of a cliff, with a golden shrine on top. 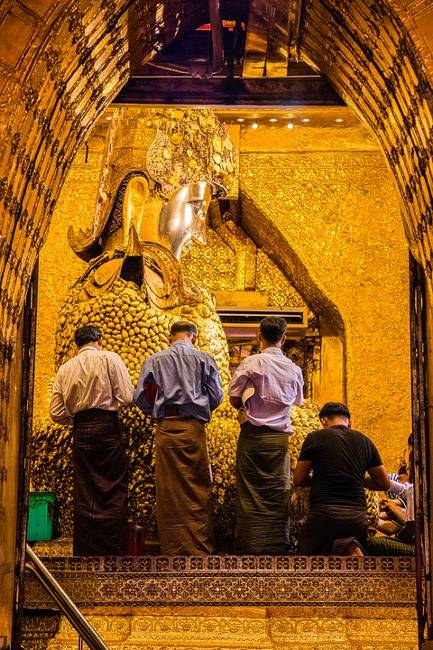 The Mahamuni Buddha Temple in Mandalay is one of the most important pilgrimage sites in Myanmar and the most spiritually important temple in the country. This is because it is home to a very special gilded Buddha statue, which is thought to be one of just five likenesses of Buddha ever made.

Even if you’re not a very spiritual person, it’s worth it to make the trip to Mahamuni Temple because the sight of the statue is just incredible. It’s worth noting that, because this place is of such huge importance for the people of Myanmar, it is often very crowded.

Also, women aren’t allowed to get too close to the Buddha statue, so this temple can be a bit of an underwhelming experience for female travelers. The sight of the temple alone is spectacular, but you can’t really get close enough to the main reason why people come here, which is a shame.

Thatbyinnyu Phaya is an imposing, 66-meter Buddhist temple in Bagan. It was originally built in the 12th century, as a reflection of new artistic creativity and innovative architecture in Bagan. This is also the tallest temple in Bagan, with the Shwesanda stupa being the only taller construction in this region.

Additionally, this five-story temple is not just a place of worship, but also a library and even a monastery. The first and second floors of Thatbyinnyu Phaya were used as residences of monks, while the third floor was used to store various images. The fourth floor functioned as a library, and relics were stored on the fifth floor. 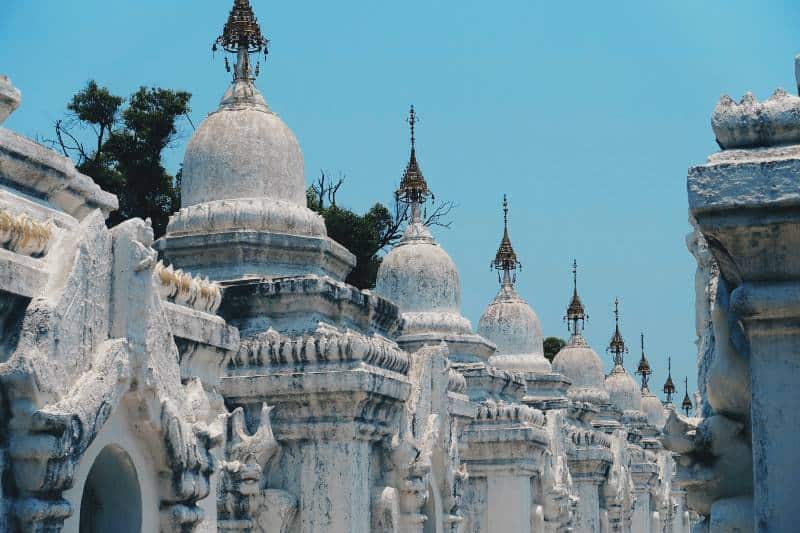 Kuthodaw Pagoda is a Buddhist stupa situated at the foot of Mandalay Hill. It is 57 meters high, and it’s home to the largest book in the world, the Tripitaka tablets. There are a total of 730 tablets and 1,460 pages, which are all 1,07 meters wide and 1.53 meters tall.

Each of the tablets has its own cave-like structure that is called kyauksa gu. There are 729 of these structures at the temple grounds, and they are arranged around the central pagoda. Being here and seeing all of this with your own eyes is an experience you will never forget, which is enough to make the Kuthodaw Pagoda a must-see temple in Myanmar. 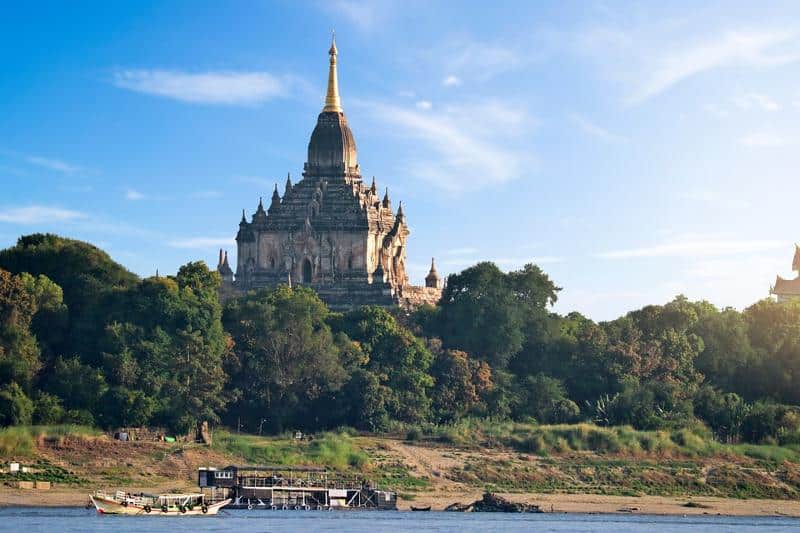 Gawdawpalin Temple is the second tallest temple in Bagan with an impressive 55-meter height. It is two stories tall, with four upper and three lower terraces. What’s special about Gawdawpalin is that it belongs to a very specific style of temples, which are known as hollow gu-style temples. These are structures that are used for Buddhist rituals, worshipping of Buddha, and meditation.

In addition to the unique design, the temple also features four Buddha statues and spectacular scenic views. It’s situated at the bank of the Irrawaddy River, so panoramic vistas are inevitable while you’re here.

There are also lots of street vendors in the area who sell food and various souvenirs, making the Gawdawpalin Temple a great place to do some quick shopping in Bagan. It’s worth noting that this particular attraction is not extremely popular with tourists, so there shouldn’t be any huge crowds while you’re out visiting temples.