Exploring places of worship is an excellent way to embrace the culture and history of a destination. That’s especially true for Singapore. Situated at the tip of the Malay Penisula, the island-state has many fascinating temples to visit.

These colorful, ornate temples are a testament to the harmonious Asian cultures that exist in the Lion City. Take a day away from the parks and beaches in Singapore to visit some of the temples. Be sure to show respect by dressing modestly. 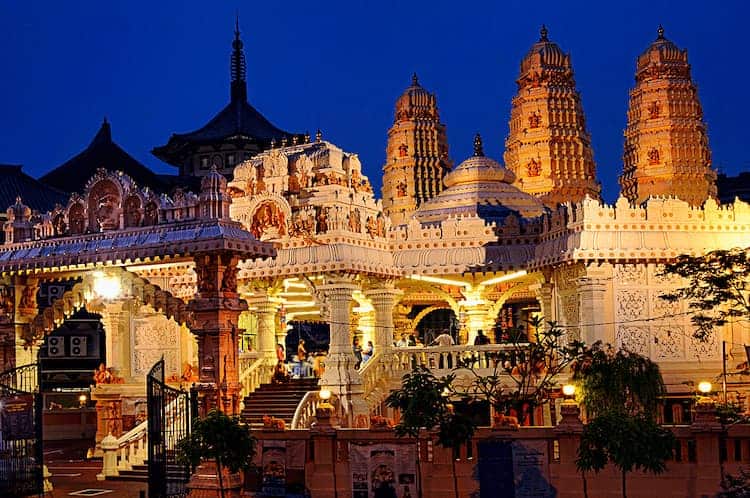 Dedicated to Lord Shiva, Sri Sivan is a rare Shiva temple here and one of the most beautiful and well-known Hindu temples in Singapore. Shiva, the god of destruction is the third god in a triumvirate thought by the Hindus to be responsible for the creation, upkeep, and destruction of the world. Hundreds visit the octagonal temple with its mix of North and South Indian styles on a daily basis. Visit this rare temple at 24 Geylang East Ave 2, Singapore. 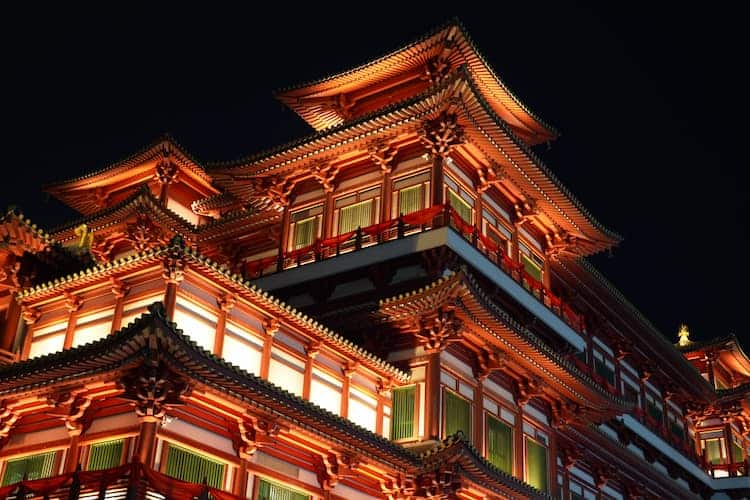 Completed as recently as 2007, this temple and museum reflect a history that is centuries old. Located in Singapore’s Chinatown, its visually stunning architecture is influenced by the Chinese Tang dynasty. The tooth of Buddha, considered a holy relic, is housed here making it one of the must-see Buddist temples in Singapore. The building also houses a museum with beautiful related artworks and a bookstore. Find it at 288 South Bridge Road, Singapore. 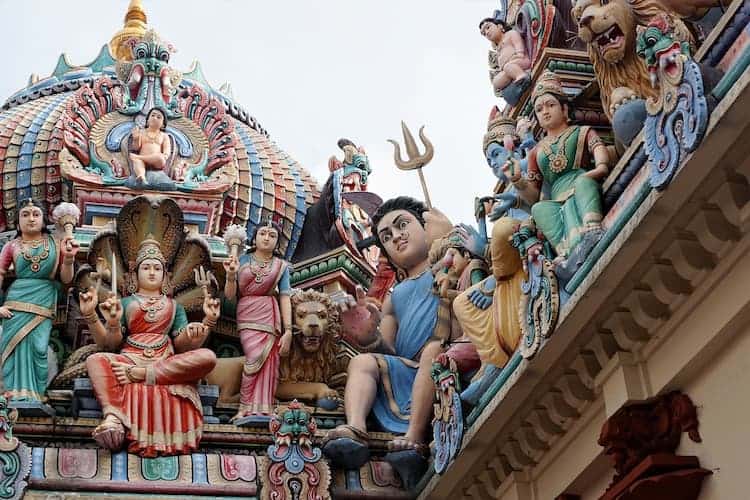 Built in 1827, the Sri Mariamman Temple is Singapore’s oldest Hindu temple. The temple is dedicated to the goddess Mariamman who was thought to be the protector from illness and disease. It also houses the shrine of the goddess Draupadi as well as figurines of Lord Shiva, Lord Rama, Lord Ganesha, Murugan, and the goddess Durga. The entrance tower is adorned with carvings of deities from Hindu mythology. See this temple at 244 South Bridge Rd in Singapore’s Chinatown.

One of the oldest and most important Hokkien temples in Singapore Chinatown, the name Thain Hock Keng translates to the Palace of Heavenly Happiness. Dating back to 1839, it was built to worship the Chinese sea goddess Mazu and serve as a place for the Hokkien immigrants and seafarers to give thanks for a safe passage to Singapore. Architectural marvels include intricate sculptures of dragons and other traditional Chinese elements. Visit this temple at 158 Telok Ayer St.

One of Singapore’s largest temples, Bright Hill is a sprawling modern building covering 12 hectares. It features many grand halls, shrines, and Chinese statues. There is also a serene garden, a huge turtle pool, and a crematorium on the grounds. Keep in mind that many funerals and cremations are held here on a daily basis. Dress respectfully and visit this temple at 88 Bright Hill Road.

Located across the street from a Thai Buddhist temple, this Taoist temple was built to worship Guanyin, the Chinese goddess of mercy. Childless couples often come here to pray for her blessing. Featuring bold reds and yellows, it resembles a Chinese palace. Located at 371 Race Course Road, this temple is within walking distance from the Farrer Park MRT station.

Established in 1927 by the Thai monk Vuthisara, the Sakyamuni Buddha Gaya Temple features a 15-meter-high Buddha statue surrounded by a myriad of lightbulbs. This is why it’s often called the Temple of 1,000 lights. The Buddha statue is seated inside among many other smaller images. It’s also close to the Farrer Park MRT station at 366 Race Course Road. 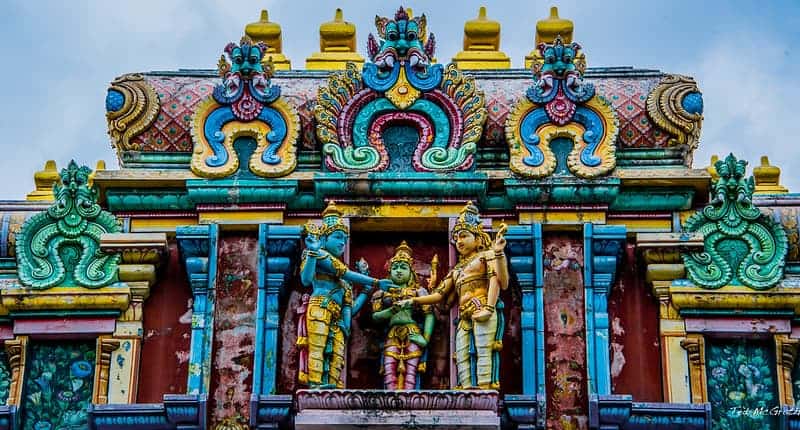 The Sri Thandayuthapani Temple, sometimes called the Chettiar Hindu Temple, is the focal point for the popular Navarathiri Festival. Held in October, the Hindu “Nine Lights” is a celebration of the goddesses Dhurga, Saraswathi, and Lakshmi. The celebration lasts for nine days and features joyous worship, dancing, and music. The temple was constructed in the South Indian style on a former temple site from the 1850s. See this temple at 15 Tank Rd.

This temple was built in 1908 to commemorate the birth and death of Buddha. Now a national monument in Singapore, it has an elaborately decorated gateway leading to a courtyard that is only accessible by a bridge. Inside the temple are a carved Buddha imported from Thailand alongside enormous incense burners. A monastery, rock garden, and another smaller temple are also located on the grounds at 184E Jalan Toa Payoh.

Sri Srinivasa Perumal is a temple complex located in the Little India district of Singapore. Built in the style of South Indian shrines, the 20-meter tall entrance tower features sculptures that reflect the diverse manifestations of Lord Vishnu, the second god in the Hindu triumvirate whose job is to restore the balance of good and evil. The six-tiered entrance tower is part of a 1960’s renovation. A row of statues of gods and goddesses line the entrance walls. The courtyard has a well that once served as a source of water for worshippers. Visit the temple on Serangoon Road.

This is the only temple that caters to Singapore’s North Indian Hindu community. Located in Little India, it was founded in 1969. In addition to serving as a place of worship, it provides a venue for various cultural events. Unlike South Indian temples, the entrance tower is of a plainer, more simple design with no intricate carvings on the ceilings or walls. The deities of various Hindu gods and goddesses are enshrined in the temple’s main hall. Located on Chander Road in Little India, the temple draws a crowd during the festivals of Navratri and Deepavali.

Jin Long Si is basically a Mahayana Buddhist temple that blends Taoist and Confucian beliefs. This temple is admired by visitors for its elaborately carved reliefs and busts. Huge dragons adorn the corners of the building creating one of the most decorative Buddhist temples in Singapore. Another significant feature is the temple’s 120-year-old Bodhi Tree brought over by monks from Sri Lanka. Visit the temple at 32 Tai Seng Avenue. 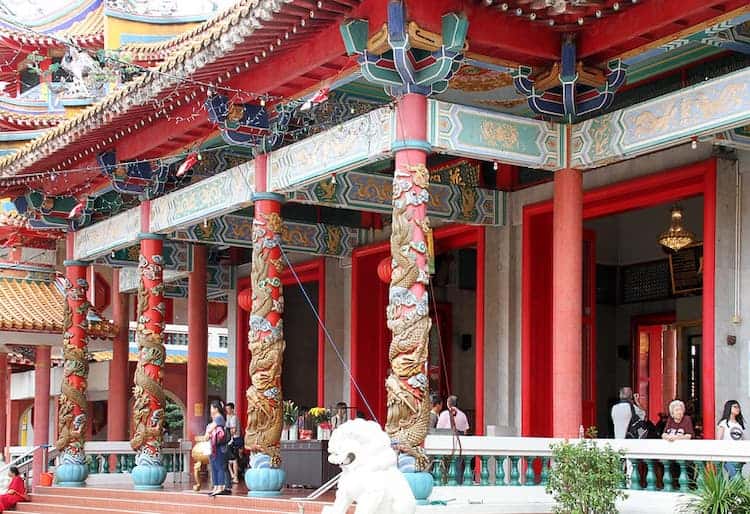 This Buddhist temple and monastery were built in the early 20th century to promote Buddhism and provide lodging for monks. Today, it’s Singapore’s largest Buddhist temple and provides many services to the local Buddhist population. It’s a popular place to visit during Veska day and other Buddhist festivals. Chinese influence can be seen in its architecture which isn’t unusual since most Buddhists in the island city are Chinese. Some unique artifacts housed here include the Bodhi tree and a huge statue of Buddha. The statue is one of the largest in Asia, and the Bodhi Tree is said to be related to the same one Buddha attained enlightenment under. You’ll find this temple and monastery at 88 Bright Hill Rd.

Also known as the Burmese Buddhist Temple, this temple is recognized as Singapore’s oldest Theravada site. It’s one of the most famous Buddhist temples in the city and serves as an important cultural center for the local Burmese community. The white marble statue of Buddha is the largest one of its kind outside Myanmar. A brilliant light surrounds the statue lighting the space with a striking golden hue. The temple’s entrance features traditional Burmese architecture. The whitewashed walls are topped off with gold embellishments. See this magnificent temple at 14 Tai Gin Rd.

This temple is located at the Yishun Industrial Park which has a history of serving as a dockyard for the British Royal Navy about 50 years ago. It is said that a dockyard worker once had a dream on the eve of Pongal in which Lord Murugan and a golden cobra were seated under a tree in a swampy mangrove. The worker searched and found the tree in his dream with six main branches symbolizing Lord Murugan’s six arms. This was the beginning of a small shrine, and a temple was constructed around the tree. the “Holy Tree” became one of Singapore’s most popular Hindu temples. The temple draws crowds of worshippers during the annual festival of Panguni Uthiram held in March and April. Visit the temple at 10 Yishun Industrial Park A. 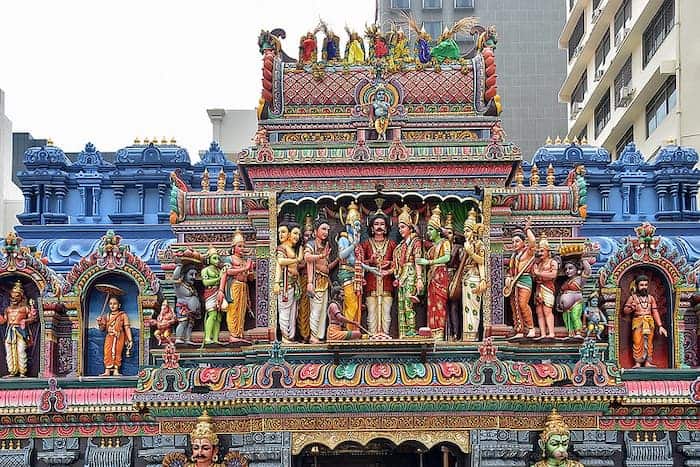 Sri Krishnan is a Hindu temple dedicated to Sri Krishna and Rukmini, a Hindu goddess and the first queen consort of Krishna. The temple is well over a century old and was restored in 2018 after four years of painstaking work. The main entrance has some impressive statues above it and the roof is covered in sculptures of Hindu deities in bold colors. The compact complex features eye-catching Southern Indian religious art, wall reliefs, and statues at every turn. You’ll find this temple on Waterloo Stree next door to the Kwan Im Thong Hood temple.