With a mild climate, spectacular beaches, amazing historic attractions, and excellent hiking trails, Sicily is a great place to visit no matter what you want to do on the island. But it matters when you visit because your trip can go from enjoyable to nightmarish pretty fast.

Read on to learn more about the different seasons in Sicily, and to see when the best time to visit this charming Italian island is! 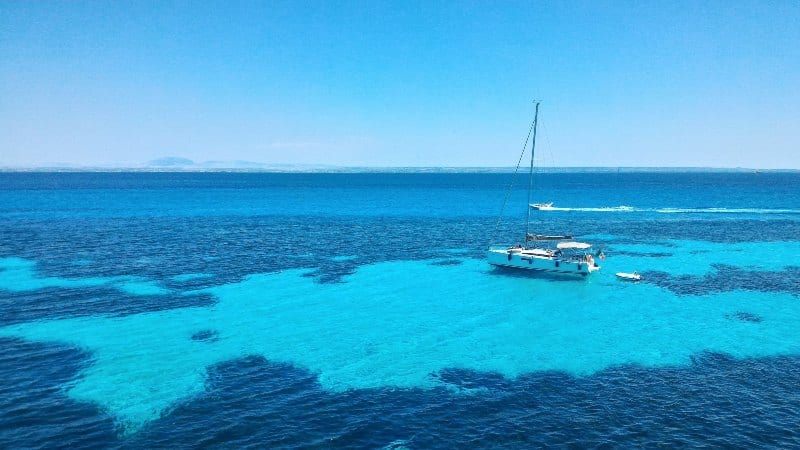 Sicily has a typical Mediterranean climate with hot and dry summers and mild winters. It’s the perfect place for a summer vacation, especially for people who enjoy spending their time on the beach.

However, if you want to really enjoy your time in Sicily, traveling there in the summer is not exactly the best idea. It’s fine if you just want to relax on the beach, but if you would like to explore different cities and go on hikes, you shouldn’t plan a summer trip. It gets very hot on the island in the summer, to the point that it’s not exactly safe to be outside in the afternoon.

The summer season is the driest and it sees virtually no rain, except for the occasional summer shower. The wet season in Sicily is between November and February, and even then we see an average of 3″ of rainfall during the rainiest month (December). Snowfall is very rare on the island and it only happens on the northern coast and at very high altitudes.

In practice, this means that you could travel to Sicily any day of the year and have a great time. But if you want to know when the absolute best time to visit Sicily is, just keep reading! 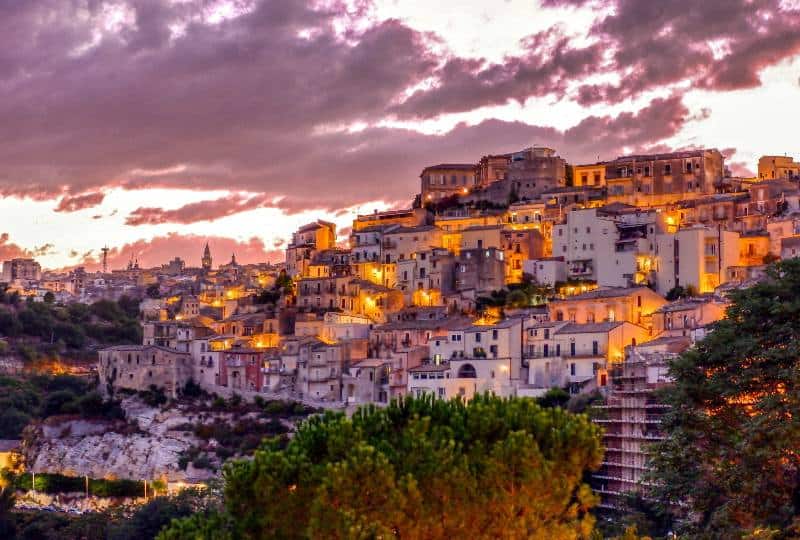 The shoulder seasons of May, June, September, and October are the best time to visit Sicily. The temperatures are still pretty high but nowhere near as unbearable as in July and August. This pleasant weather is perfect for chilling on the beach, hiking, and exploring the many temples of Sicily.

Additionally, you’ll get a better deal for accommodation, since these are not the peak tourist seasons on the island. This also means that the crowds aren’t as big as during high tourist season, so it’s easier to enjoy your stay. You might experience crowds at the more popular tourist attractions, but it’s generally not as busy as during peak season.

May and June are the drier shoulder season, with an average precipitation of 0.45”. September and October have higher precipitation, but also higher temperatures. Both September and October have average low temperatures in the 60s and highs in the 70s, whereas May is slightly colder. The average highs in May are in the mid-60s, while the average lows are in the mid-50s. 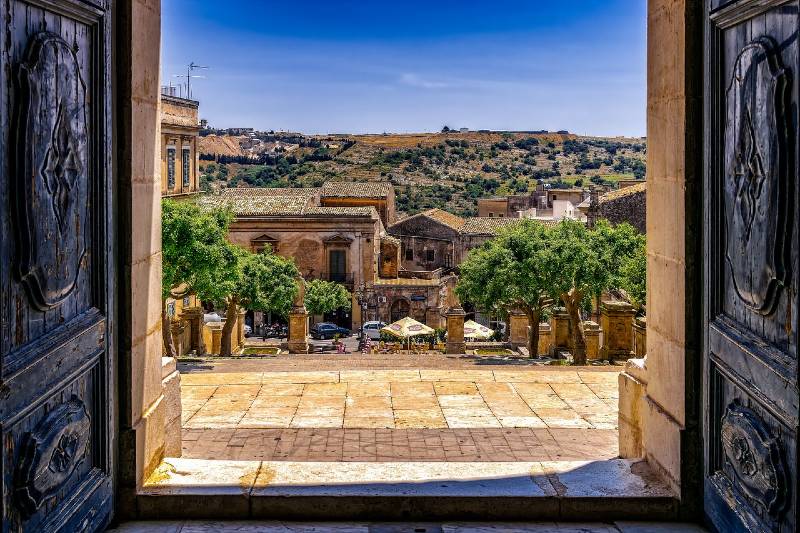 June has average temperatures that are slightly lower than those of September, but the statistics are a bit deceiving. Siciliy weather in early June means temperatures that exceed 100 degrees Fahrenheit, and you should be prepared for proper summer heat even if you’re visiting during shoulder season.

Similarly, early September Sicily weather can still be quite hot, although it tends to start cooling towards later in the month.

Another thing I want to talk about here is the UV Index. It’s something that not that many people pay attention to, but it’s still important. June and September still have a pretty high average UV index of six, which often rises throughout the day along with the temperature. May and October, on the other hand, have an average UV index of five, which is considered moderate and not as dangerous.

Major tourist attractions and famous sites are open during shoulder seasons, and some of them will even offer discounted prices. And there won’t be as many people at most places, except for a few of the most popular attractions on the island.

The hiking trails are in great condition during the off-season, making this the ideal time for adventurous travelers as well. Whether you want to hike to the temples or to the top of Mount Etna, you’ll be glad to know that you can easily do any trail doing the shoulder seasons. 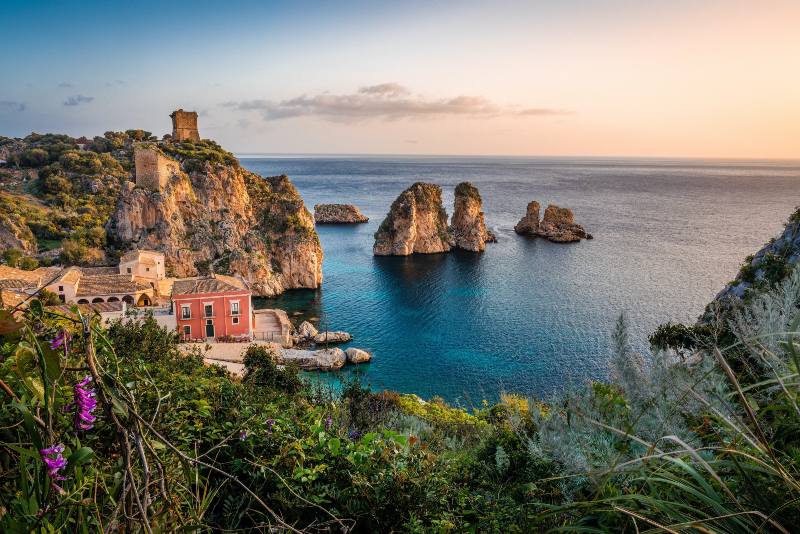 July and August are the hottest and driest months on the island and summer in Sicily is the peak tourist season. People flock to the island for their summer vacations, which in turn causes accommodation prices to skyrocket. Hotels get booked up pretty fast, there are crowds at most major tourist attractions, and it’s a struggle to find a free table at a restaurant.

Another reason why you shouldn’t travel to Sicily in the summer is the heat, even if you prefer warmer weather. The average highs during the summer are in the 80s, but that’s just the average. Sicily weather means temperatures higher than 100 degrees Fahrenheit even in June, so you can only imagine just how hot it can get in the middle of July.

To deal with the heat, most people just head to the beach and try to cool down in the ocean. The crowds at public beaches are so big that sometimes you don’t even have a spot to put down a towel, let alone anything else.

Plus, most people head back inside after noon and stay there until the evening because the heat becomes unbearable, and the UV index is usually dangerously high. July and August have an average UV index of seven, which is harmful without adequate protection. Also, bear in mind that seven is only the average – on very hot days, the UV index can easily rise to extreme levels. The best way to protect yourself from sun damage is to stay indoors while the UV index is at its highest. 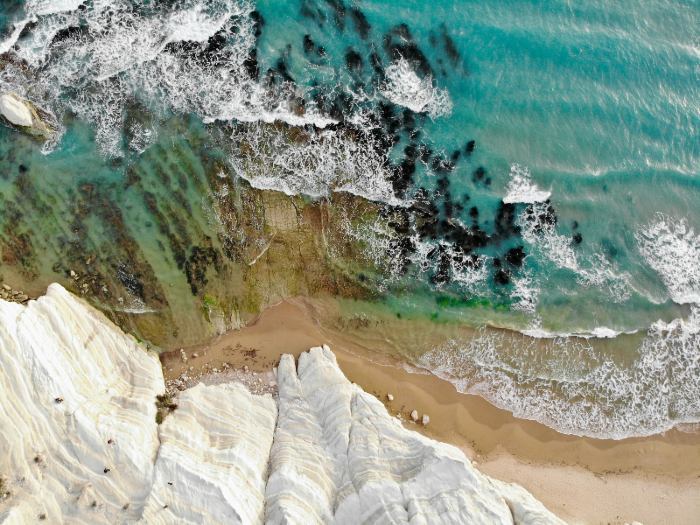 It’s worth noting that the largest crowds are in the coastal towns. Everyone wants to relax on the beach, and the only way to avoid the crowds is to stay in inland Sicily. But then again, even people from inland Sicily flock to the coast in the summer and few businesses stay open. On top of that, most businesses are closed from 1 PM to 4 PM because of the ridiculous heat.

On the other hand, if all you want to do is lie on the beach and relax, maybe summer is the best time for you to visit. I would recommend looking for accommodation on a private beach since that’s the best way to avoid huge crowds. 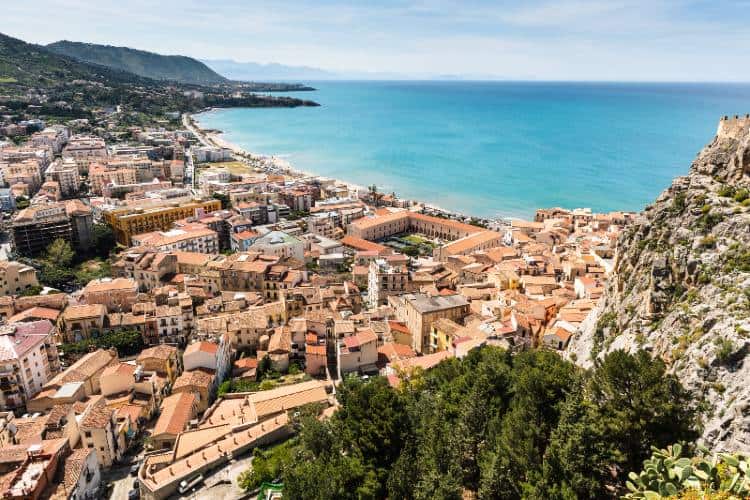 If you’re not a fan of excessive heat, you could plan a trip to Sicily in the winter months, during the low season. The temperatures are significantly lower, but it’s still pleasant outdoors. The average highs range from low-50s to mid-60s depending on the month, and the precipitation is still minimal. December is the rainiest month on the island, and it only gets about 3 inches of rain.

Winter cold spells generally last just 2-3 days and they’re usually not very intense, especially on the coast. It can sometimes snow on the northern part of the island, as well as in mountainous areas with high altitudes. But snowfall is very rare in practice and it’s not something to be worried about. The only time when you should worry about snow is if you’re planning to do a high-altitude hike.

You won’t see Sicily at its peak, but you will get to experience it without huge crowds and unbearable heat. Not all attractions will be open though, so you might need to adjust your itinerary a bit. But most outdoor activities are still viable, so you can go hiking, tour the temples, and just enjoy the island. It’s even possible to swim in the sea in November and December, but only if you’re brave. 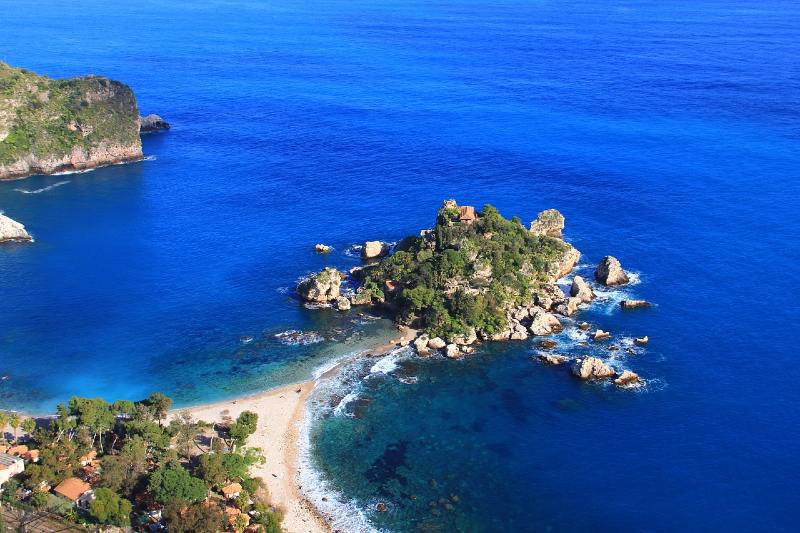 If you’re up for a winter visit to Sicily, I would recommend staying somewhere on the southern coast. It’s warmer in the south and there are plenty of interesting places worth exploring. Late fall is a particularly good period for hiking – most trails are easily accessible and it’s much easier to enjoy them when you’re not sweating bullets because of the insane heat.

On top of all that, accommodation prices are at their lowest in the off-season, so it’s a great time to visit if you’re on a tighter budget. November sees average highs in the 60s and lows in the 50s, which is a pretty comfortable temperature for a winter month. The average sea temperature in November is around 70 degrees Fahrenheit – it’s cooler than in the summer, but it’s certainly not cold.

It’s worth noting that the UV index in Sicily is moderate, even during the off-season. November and March have an average UV index of four, while December-February features an average UV index of three. It’s much harder to burn, but it’s still important to apply sunscreen throughout the day, especially when the sun is at its strongest. 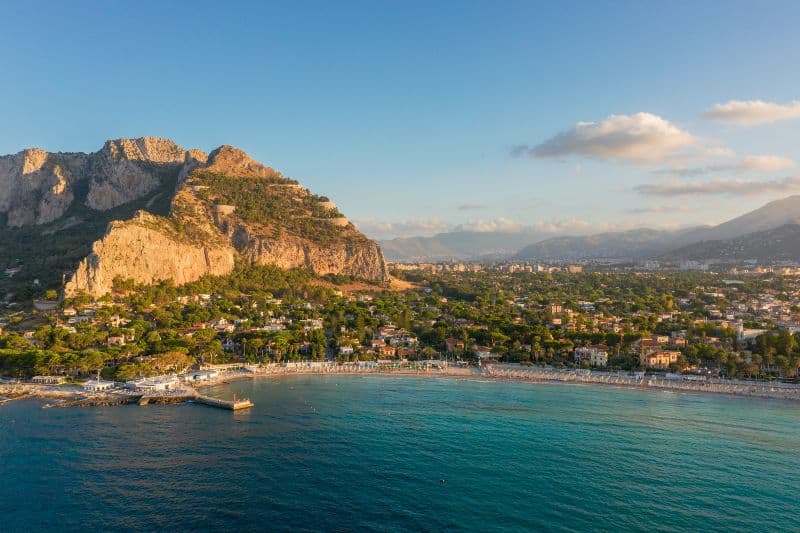 Sicily gets really busy during the holidays. Christmas and Easter as pretty much the second highest tourist season on the island and it’s best to avoid visiting Sicily during those holidays. And not even because of the crowds – late December and early January have several national holidays as well, so most businesses in Sicily are closed during this period.

There are really not that many things to do on the island if the major tourist attractions are closed, and you can’t go relax at the beach because it’s too cold. If the shoulder seasons are the best time to come, then Easter and the Christmas holidays would be the absolute worst time to travel to the island.

Best Things To Do In Sicily 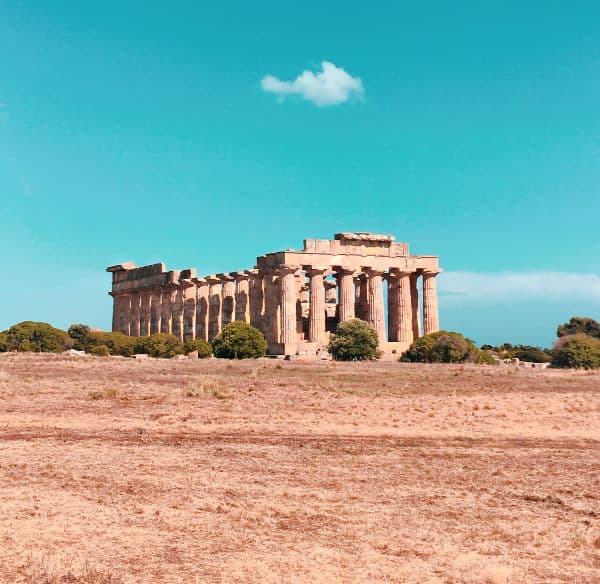 The best thing about Sicily is that it caters to pretty much all different kinds of travelers. Whether you want to go hiking, explore the temples, or just sit on the beach all day long, this island is perfect for you.

Palermo is the island’s capital and the most populated city in Sicily, with more than one million residents. The beautiful architecture and historic sites make it worth visiting, but I would advise against staying exclusively in Palermo. You won’t get the proper Sicilian experience if you just stay at another busy metropolis.

If you enjoy exploring historic sites, you should definitely plan a trip to Taormina and Agrigento. Taormina features a spectacular Roman Theatre, while Agrigento is known for the Valley of the Temples – one of the most popular tourist destinations on the entire island. Agrigento is one of the busier places on the island, but the crowds shouldn’t be too big if you’re visiting during off or shoulder seasons. 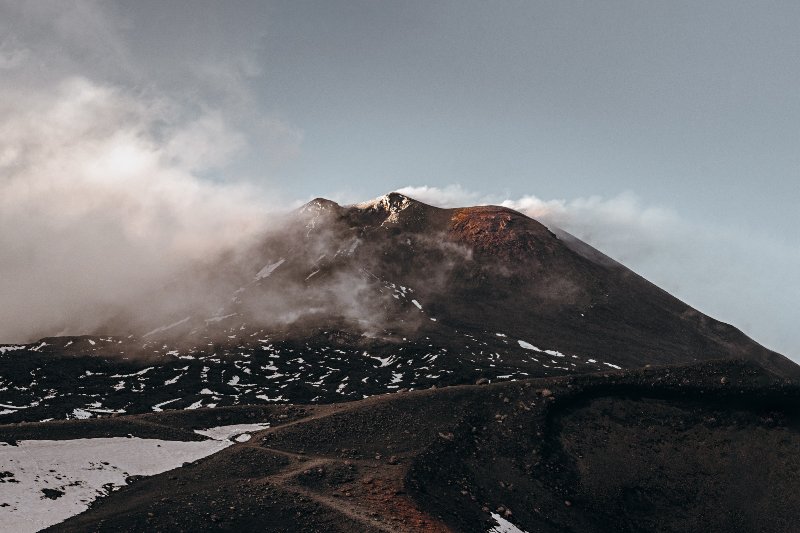 Hikers should plan to spend most of their time on the east coast. It’s possible to hike to the top of Mount Etna without any guides, and it’s a must for avid hikers who enjoy taking on challenging trails. Plus, it’s a lot colder at the top of the volcano, so it’s a great place to escape the unbearable summer heat.

The trail to the top of Mount Etna is just one of the many different hikes on the island. Sicily’s varied relief boasts many other mountains and hills worth climbing, most of which reward you with spectacular panoramic vistas. The higher you climb, the better the views.