When it comes to the best views anywhere, the Yosemite Region is one breathtaking view in itself. Within the region and the Yosemite National Park, there are many designated points with views of the Yosemite Valley, surrounding domes, rock formations, dams, and waterfalls. Visitors aren’t limited to these viewpoints. Turnouts along the way also provide spectacular views.

Located in California’s stunning Sierra Nevada mountains, the natural beauty of the Yosemite region inspired an entire conservation movement in the 1800s that resulted in a protected national park. Yosemite National Park was created by naturalists lead by John Muir and photographer Ansel Adams.

Here are the best views in Yosemite National Park, many of them accessible from paved roads inside the park. 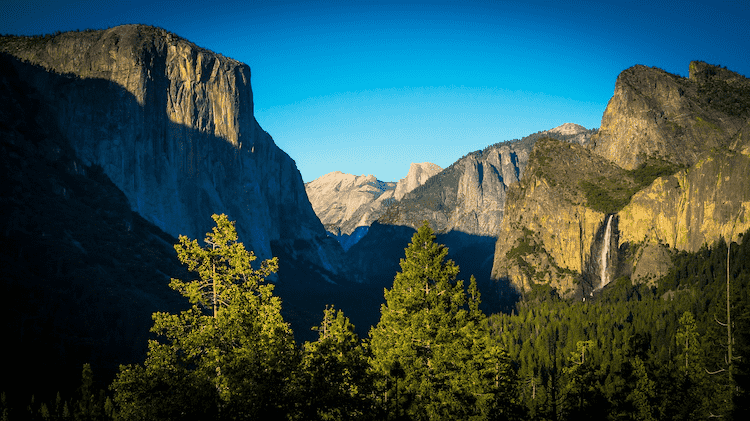 One of the most popular Yosemite National Park views, Tunnel View is located at the western entrance of the Yosemite Valley along Hwy 41. From the valley floor, it’s a 1.6-mile climb to a parking area just before a tunnel.

Get your camera ready to take a panoramic shot of Yosemite Valley outlined by ponderosa pine forests and open blue skies. To the right, you’ll see the plunging Bridalveil Fall and the iconic El Captain granite rock formation. The famous Half Dome rises in the background. 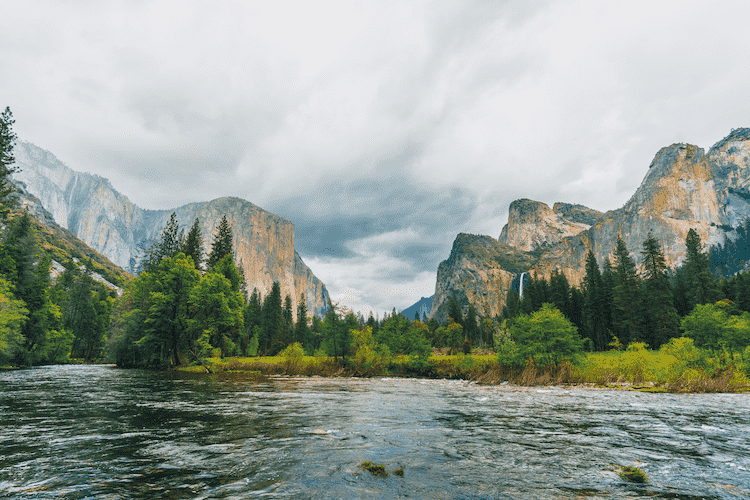 Valley view is a roadside lookout along one-way Northside Drive near the national park’s south entrance. The pull-off is between the trailhead for Bridalveil Creek and Pohano Bridge. Parking spots are limited to about a dozen, so expect to circle around a few times before snagging one.

Another option is to take the shuttle to Stop 4. From here, it’s a 15-minute walk to the viewpoint. The most impressive sight at this viewpoint is the reflection of the soaring 3,000-foot tall El Captain and the surrounding Cathedral Rocks and Cathedral Spires. Don’t miss the nearby Mariposa Grove of Giant Sequoias.

One of the best views in Yosemite National Park can be admired from Columbia Rock situated on the Upper Yosemite Falls trail. It’s a relatively moderate hike that’s only two miles round trip. Beginning hikers won’t find it too difficult even though the 1,000-foot gain comes rather quickly.

The trail is located at Camp 4. You can get to the trailhead on foot from the Yosemite Valley Lodge, park in the lodge parking lot, or take the shuttle bus. Once there, you’ll have a striking, unobstructed view of Half Dome and the Yosemite Valley. 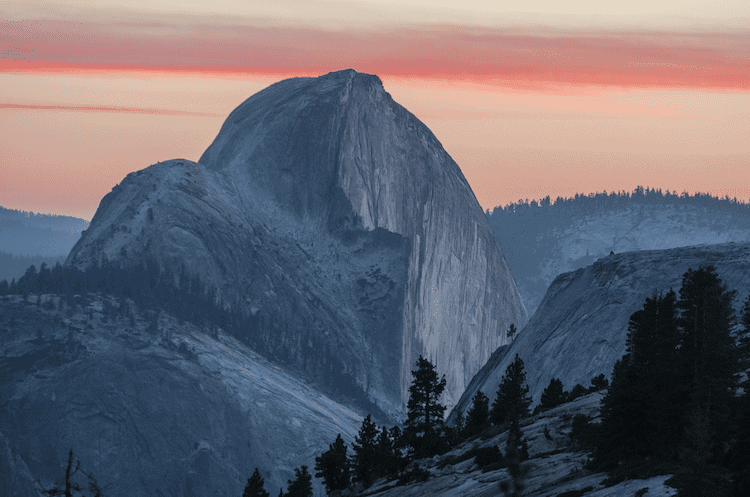 A high-altitude scenic drive along Tioga Road to Tioga Pass offers jaw-dropping views around virtually every bend. The best viewing stopover is at Olmstead Point with its view of the Yosemite Valley, a different perspective of Half Dome, and the northwest pace of Clouds Rest.

You’ll also see the Tenaya Canyon and the Tenaya River sparkling in the distance. The view can be seen from the road’s overlook or you can choose to take a short (0.2) mile hike. 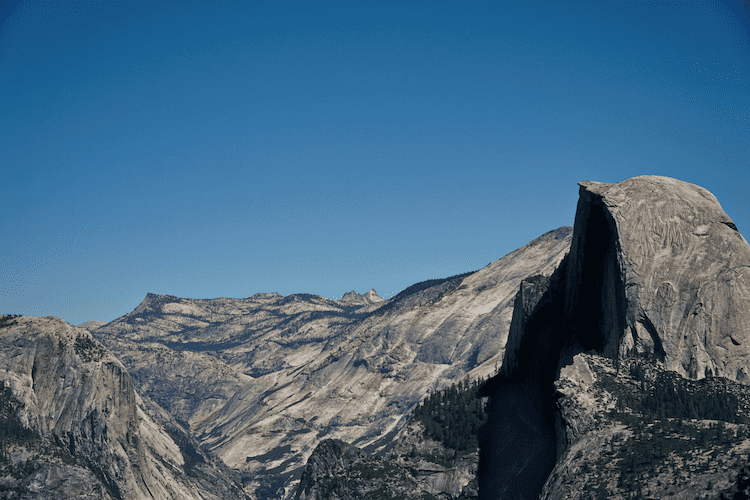 One of the most amazing Yosemite National Park views is the overlook at the end of Glacier Point Road located about an hour by car from the Yosemite Valley. Glacier Point is famous for more than the view. It was once the camping site for John Muir and President Teddy Roosevelt.

You can take a short, paved wheelchair-friendly trail from the parking lot and tour the unloading area to see a vista of Curry Village on the valley floor 3,214 feet below. You’ll also have a clear view of Half Dome and Yosemite Falls. Keep in mind that the road beyond the ski and snowboard area is only open from late May through October or early November depending on conditions.

Continuing past Glacier Point you’ll arrive at Taft Point for views that are even more incredible. It’s a popular spot for Instagram photos of wedding proposals. Getting there takes a fairly long hike (7.5 miles round trip) so be prepared. You’ll park at the Glacier Point parking lot or take the shuttle from the ski area. Be warned that fall tragedies have occurred here, so take care not to get too close to the edge.

Located an hour by car from the Yosemite Valley, El Capitan Meadow is the place to go to get an idea of the scale of the grandeur of Yosemite’s granite formations. At 3,593 feet above the floor of the valley, El Capitan is the largest single slab of granite on the planet.

If you have binoculars, you may spot a few brave climbers. Using a camera with a wide-angle, you can get some fantastic perspective shots. To get there, take a shuttle to the El Capitan or Cathedral Beach Picnic Areas.

You can also take your own car and park in the parking lots on Northside or Southside Drive. El Capitan Meadow is also reachable via the Valley Loop Trail. It is also a great place to spot rock climbers high up on the El Capitan wall.

One of the best Yosemite National Park views with the least effort is on the way to or from Glacier Point at Washburn Point. You’ll have impressive views at an elevation of 7,500 feet by walking 20 stair steps from the parking lot.

It’s a good-sized parking lot and is rarely full since the crowds are fewer here. The view of Half Dome isn’t quite as spectacular as it is from Glacier Point, but the trade-off is views of the Vernal Falls, Nevada Falls, and Illilouette Falls. 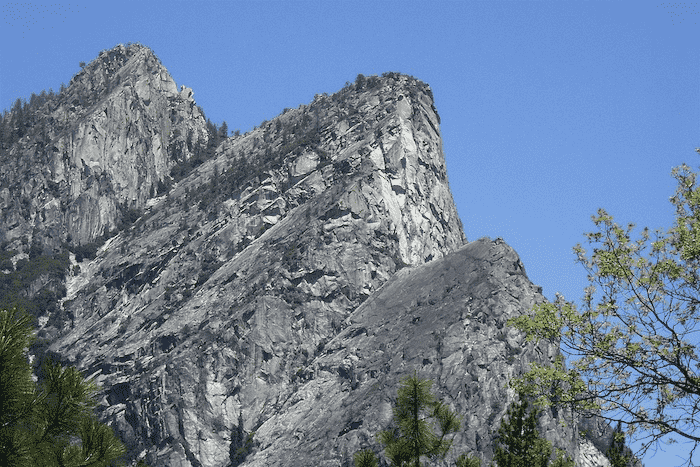 The three distinct peaks of the Three Brothers rock formation are best seen from along the Valley Loop Trail. These three peaks, the tallest of which is Eagle Point, are situated just south of the popular El Capitan. It’s a view that is much sought-after by Yosemite valley photographers as it’s reflected strikingly by the usually calm waters of the Merced River. The river also mirrors the surrounding forests.

Located in the Yosemite National Park area, the boardwalk of Cook’s Meadow offers cascading waterfall views surrounded by a verdant meadow in the late spring and summer. In the fall, the vegetation turns to a rusty gold color. The easy trail leads to views of Yosemite Falls, Half Dome, Glacier Point, and Sentinel Rock. The 1-mile trail which is mostly boardwalk is located near Shuttle Stop 6.