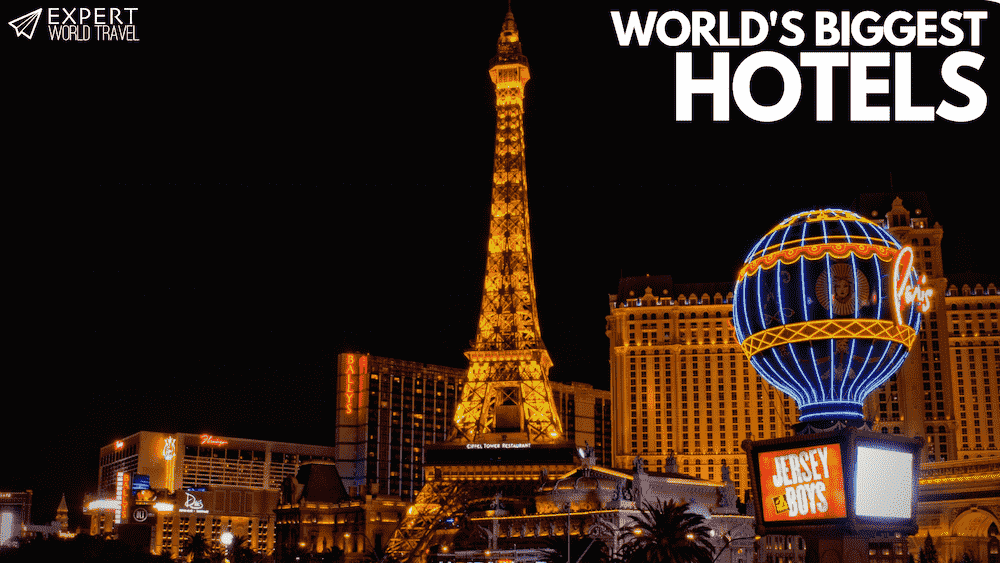 Biggest Hotels In The World

Want to know what the biggest hotels in the world are? You’ve definitely come to the right place because that’s exactly what I will be talking about here.

Here’s a little spoiler – two or three cities are home to the vast majority of the world’s biggest hotels. And if you guessed that gambling is popular in those cities, you are absolutely right!

Most of the hotels below are either in Las Vegas or Macau, but the other cities might actually surprise you. So, read on to see what the top 15 largest hotels (by number of rooms and capacity) in the world are!

The First World Hotel in Malaysia actually holds the Guinness record for the biggest hotel in the world. It is a three-star hotel in Genting Highlands and it boasts a total of 7,351 rooms in three towers, which makes it the hotel with most rooms on the planet.

This hotel actually lost the title of the world’s largest hotel to the Venetian in Vegas at one point, but it managed to reclaim it after the expansion in 2014.

The Venetian and The Palazzo, USA 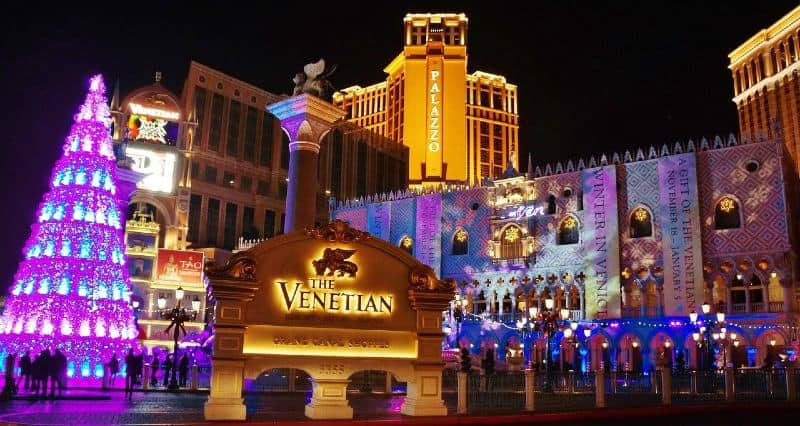 The complex includes several different hotels, and the entire area is just like one small city. There’s everything from huge pools to convention centers and shopping malls here, as well as one of the largest casinos in the world.

MGM Grand and The Signature, USA 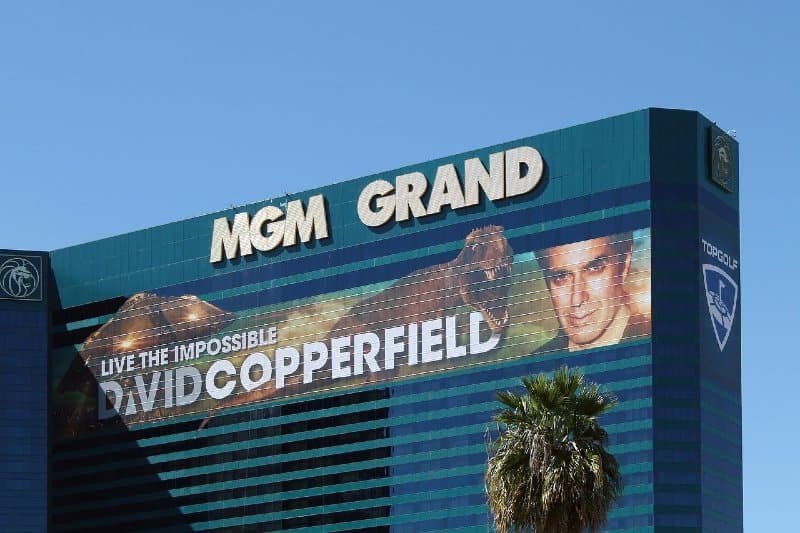 The hotel campus surrounding the MGM Grand in Vegas used to be the largest hotel in the world for a good 13 years. It was dethroned by the First World Hotel in 2006, and since then it’s been in top three of the category.

Of course, it’s in Vegas, it has a massive casino and a total of 6,852 rooms. This is the second largest hotel complex in the United States and the third largest in the world. The complex includes rivers, waterfalls, five pools, countless restaurants, bars, nightclubs and the largest casino in all of Clark County. 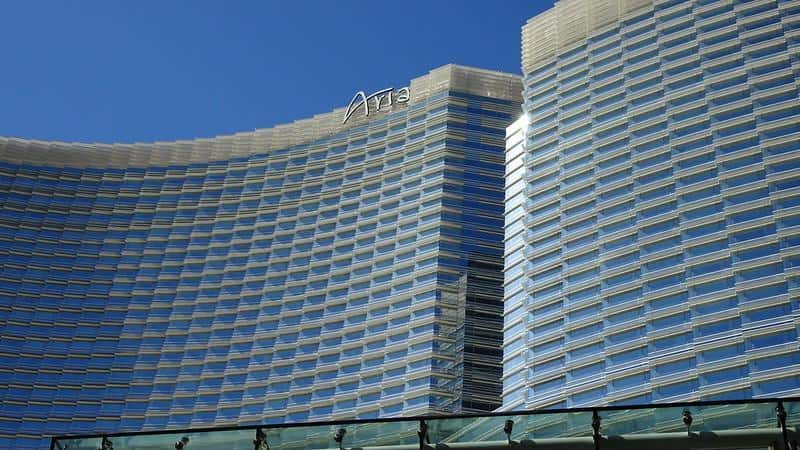 Lo and behold, it’s another hotel complex in Las Vegas. With 6,790 rooms in several towers, CityCenter is also one of the most expensive hotel complexes in the States. And not in terms of room prices – the entire complex cost over $9 billion to build, which made it the most expensive *privately* financed construction project in the country.

The Aria tower is home to the casino and the vast majority of the rooms (4,000) while the other towers mostly feature suites and condominiums. 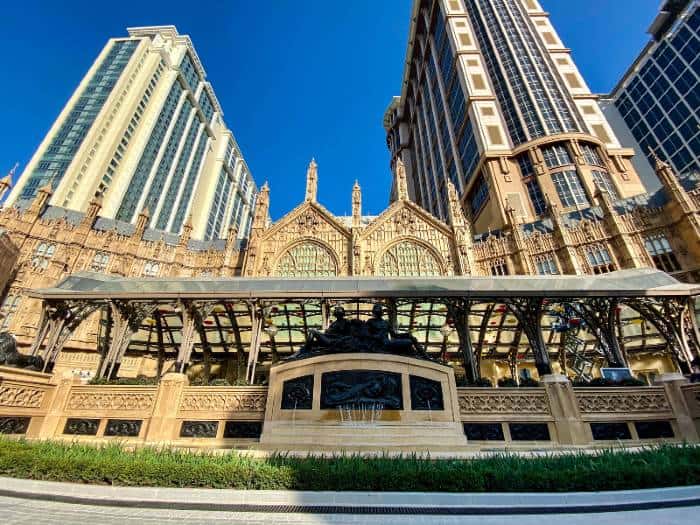 The world’s fifth largest hotel is The Londoner complex in Macau, yet another city notorious for gambling. In fact, gambling tourism makes up 50% of Macau’s entire economy, and its annual revenue from gambling is about five times higher than that of Vegas.

The hotel complex has a total of 6,000 rooms in four towers (St. Regis, Conrad, Holiday Inn and Sheraton). It was originally constructed by the Las Vegas Sands, and it was named the Sands Cotai Central complex for quite a while. It wasn’t until 2020 that it was re-branded as The Londoner Macau. 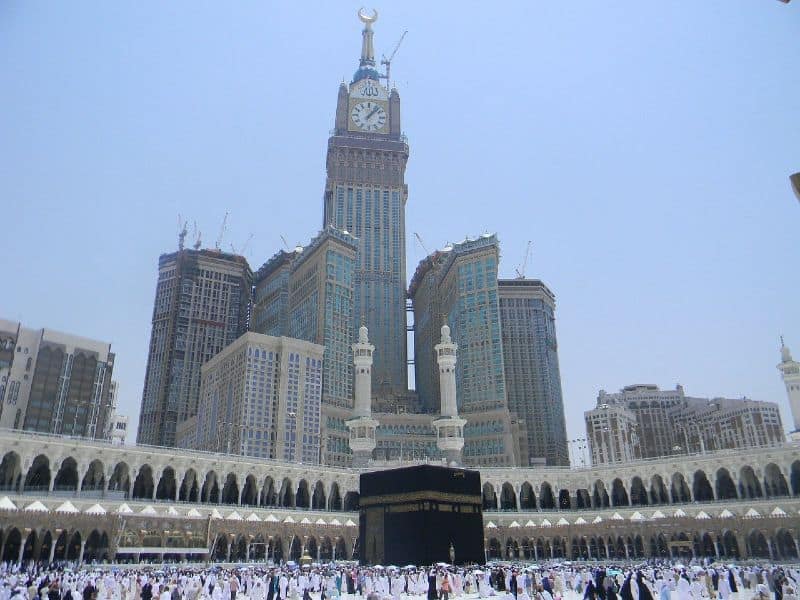 Abraj Al Bait is a hotel complex comprising of seven towers in Mecca. Mecca welcomes millions of Muslims on their annual pilgrimage, so it’s perfectly logical that one of the largest hotels in the world is in this city. And the world’s largest hotel should open here soon enough, but more on that later.

The hotel complex currently has 5,383 rooms spread across the seven skyscrapers. The central tower actually the largest clock face in the world, so it is a record holder in a way. 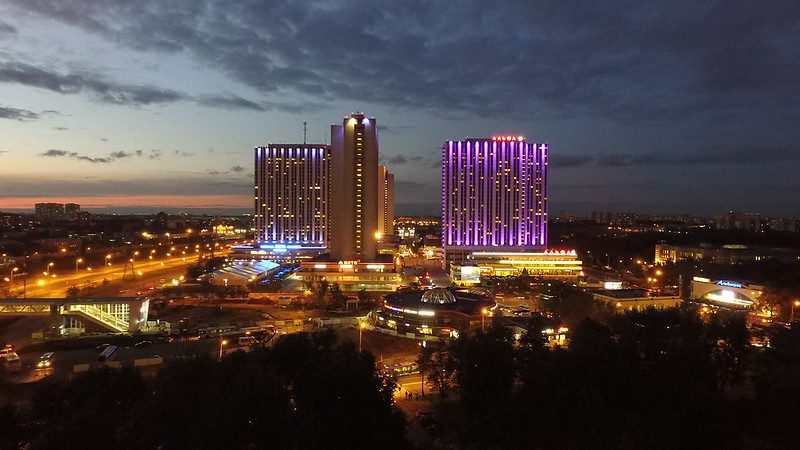 Prior to the opening of MGM Grand, Izmailovo Hotel in Moscow used to be the largest hotel in the world with 5,000 rooms. There is some conflicting information on the exact number of rooms in this hotel – some sources list it as 2,000 but others go as far as 7,500 which is just not true. And neither is the 2,000, since that number covers only two out of the four buildings.

Nevertheless, this hotel was the largest hotel in the world at one point, so it definitely belongs on this list. Plus the constant competition between the US and Russia is one of the reasons why they kept expanding their hotels and trying to get the title of the best and largest hotel ever. 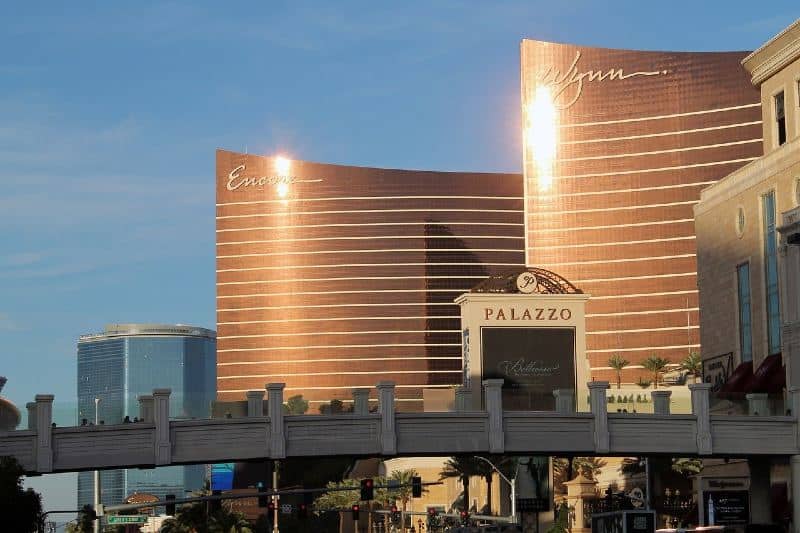 Yes it’s another hotel in Vegas, and unfortunately it’s not the last. But you can’t be surprised; the city has more than 167,000 hotel rooms total, and about 4,750 of those are in the Wynn and Encore hotel complex.

The five-star hotel complex is on the Las Vegas Strip, and it’s right next to the largest hotel in Vegas and the States. 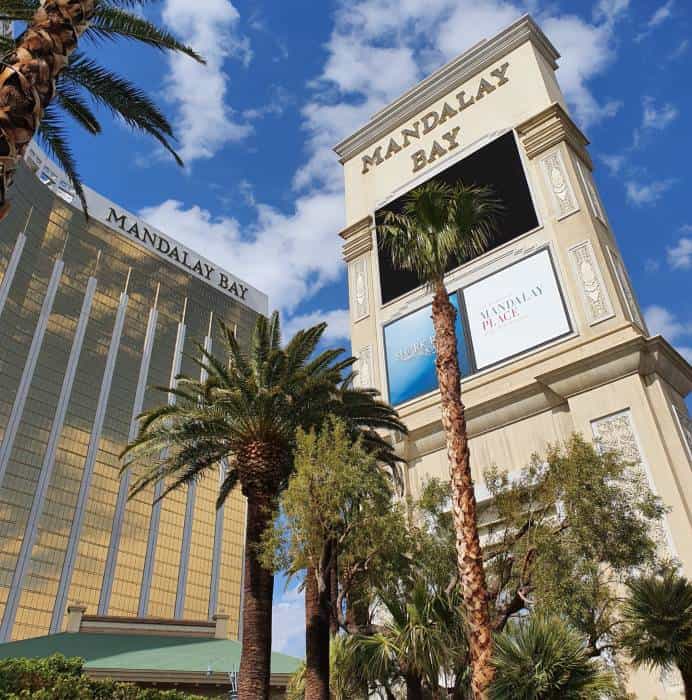 Naturally, the hotel complex features a massive casino, pools, plus countless shops and restaurants. It’s like a mini city within Vegas, designed to keep you on the premises – and in the casino – for the majority of your stay. 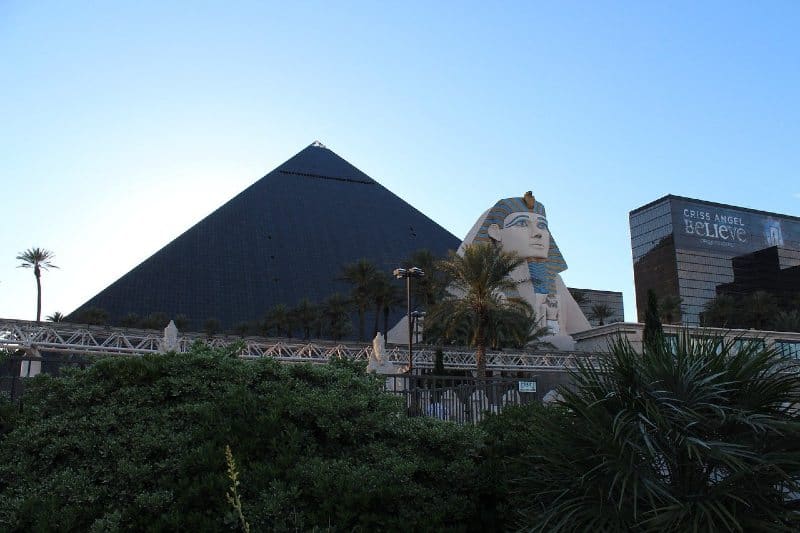 Luxor Las Vegas is a massive pyramid-shaped hotel. It has 4,407 rooms in three different buildings – the main building is the pyramid, and the other two are ziggurat towers. The theme of the hotel is obviously Ancient Egypt, given the shape of the hotel and the name reference.

The resort naturally has a casino with 2,000 slot machines and 87 table games, just like you would expect from any hotel owned and operated by the MGM group.

Ambassador City Jomtien is located in Jomtien Bay near Pattaya, and it’s definitely the largest hotel in Thailand. It has more than 4,000 rooms but the exact number is not known, so its position on the list might not be entirely accurate.

Nonetheless, the hotel and convention center complex is certainly one of the largest in the world. They consist of five different buildings that each have anywhere from 150 to 2,000 rooms, plus eight restaurants, a sports center, multiple bars and night clubs, and supposedly the largest swimming pool in Asia. 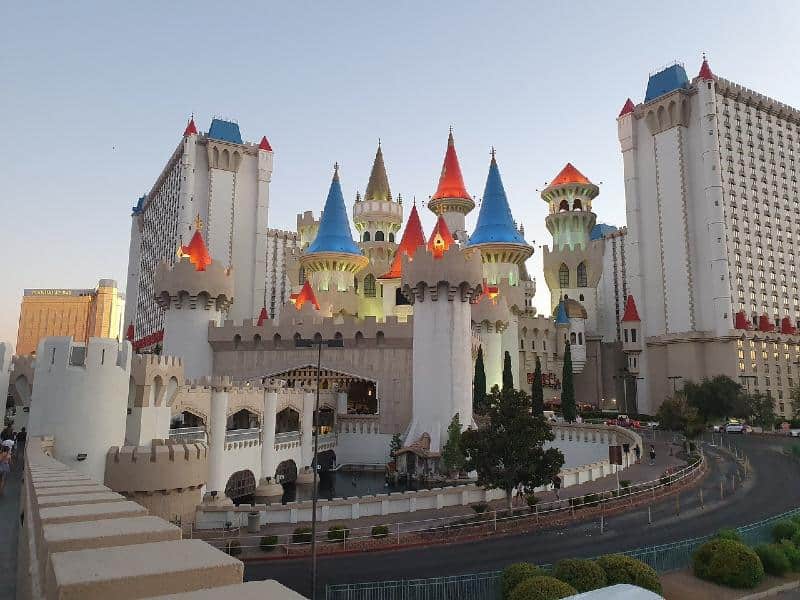 The Excalibur Hotel and Casino in Las Vegas has a total of 3,981 rooms. It is owned and operated by the MGM Group, and there’s actually a free tram that connects it to other MGM properties – namely the Luxor and Mandalay Bay.

The theme of this hotel is Medieval, and you might have guessed that from the name. It’s even more obvious when you look at the castle-stylized buildings and turrets. But with only 1,200 slot machines, the Excalibur has one of the smaller casinos on the Strip. 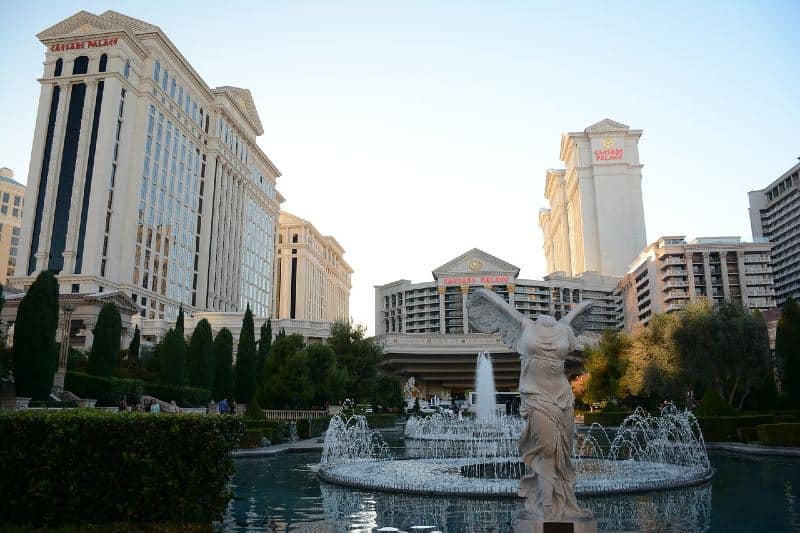 Caesars Palace is a luxury hotel on the west side of the Las Vegas Strip, right between the Mirage and the Bellagio. It is also one of the oldest hotels in Vegas, having been built way back in the 60s. Caesars Palace has 3,960 rooms across its six towers, as well as a convention center that spans across more than 300,000 square feet.

On top of that, this hotel actually has restaurants that serve authentic Chinese cuisine, which caters to the wealthy Asian high rollers. It’s one of the best casinos in Vegas, with a 24-hour poker room and countless slot machines and table games.

Sheraton Grand Macau is actually part of the Sands Cotai Central complex that’s already on this list. However, the Sheraton building is home to 4,001 rooms, which is about two thirds of the capacity of the entire resort. And for that reason only, it deserves its own spot on this list.

The hotel is the largest Sheraton hotel in the world and the biggest hotel in Macau. It is centrally located on the Cotai Strip, and it offers five-star service to all its visitors, whether they’re there for business or pleasure.

Abraj Kudai is a hotel under construction, but once it’s finally completed it will take the title for the largest hotel in the world. It will have 10,000 rooms in a ring of 12 towers, which is absolutely insane. But it makes perfect sense with the location of the hotel – Abraj Kudai is in Mecca, which annually welcomes millions of Muslims. Mecca is the home of Hajj (annual Islamic pilgrimage), so it makes sense why they decided to build such a huge hotel complex there.

It’s worth noting that Abraj Kudai was supposed to open in 2017, but financial problems halted the construction in 2015.