Planning to visit Dubrovnik in the off-season? Then you’re certainly in the right place because this detailed guide to Dubrovnik in the winter season has all the info you need to plan your trip!

What’s the weather like, what should you pack, and the top city sights are only a few topics covered in our guide. Read on to learn more about Dubrovnik in winter, and start planning your trip! 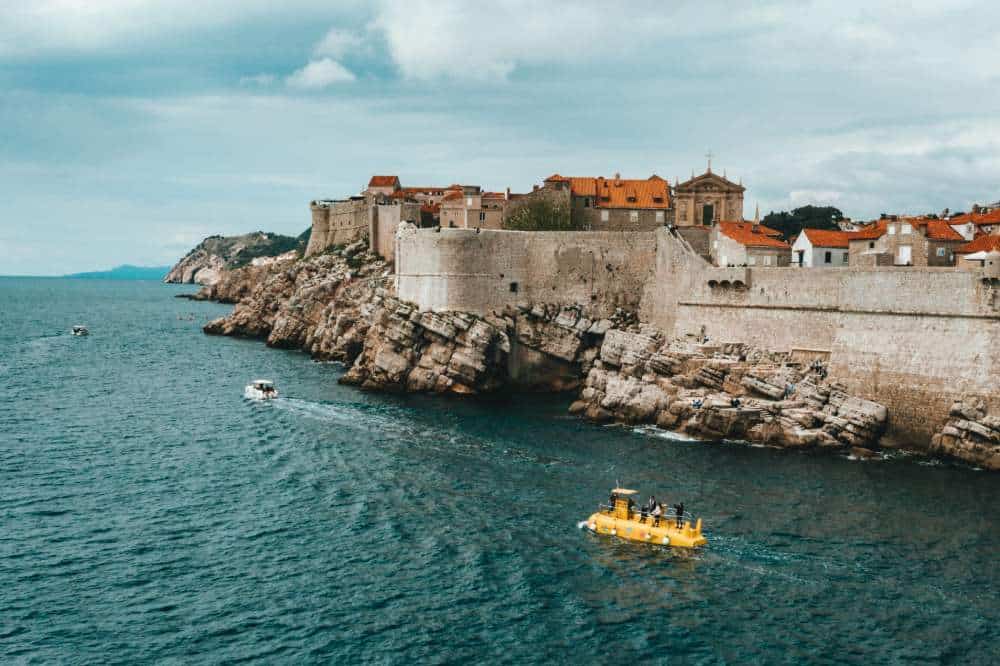 Anyone who has visited Croatia in the winter knows that the weather is weird and unpredictable. Dubrovnik, just like the rest of Croatia’s region of Dalmatia, has very mild winters.

It’s worth noting that sub-zero temperatures are extremely rare in Dubrovnik. Snow is even rarer, and on the off-chance that it does snow while you’re in this stunning city, take it as a clear sign of the devastating impact of climate change.

It’s much more likely that it will rain constantly while you’re there. December is the rainiest month of the year, with an average of 12,5 rainy days. January and February usually feature slightly less precipitation, but they still have an average of 11 rainy days per month.

Dubrovnik in winter is mildly cold, windy, and wet. However, the city still gets between 120 and 140 hours of sunlight each of these months, so it’s not all bleak and gray. You will need to religiously carry an umbrella, but you can always be surprised by the warm sunlight that invites you to strip down to your t-shirt in December! 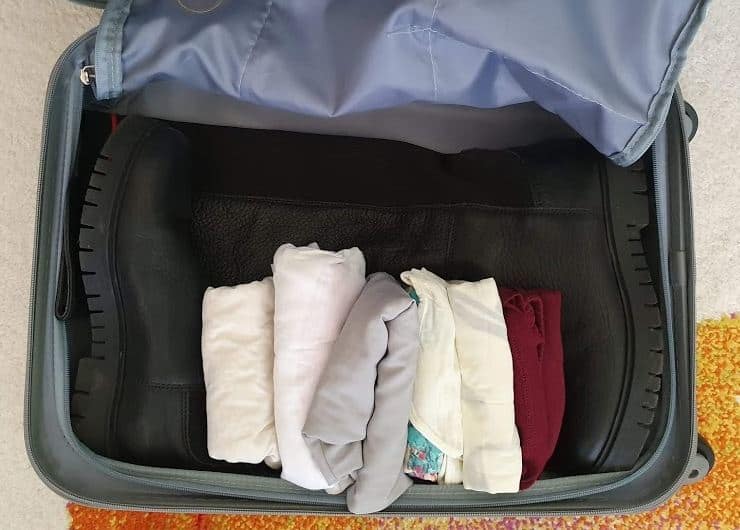 Layers are your best friend in Dubrovnik in winter. The weather can be quite unpredictable – a day can start off gloomy and rainy, and turn into the sunniest and warmest winter day by noon, and vice versa.

Pack long-sleeved shirts, sweaters, hoodies, waterproof jackets, and a lightweight down jacket, just in case. Your jacket should be warm enough for temperatures between 0 and 5 degrees celsius, especially if you plan on going out in the evenings.

For walks through Dubrovnik during the day, you should be okay with a lighter jacket. You’ll need something that keeps you warm in 10-15 degrees Celsius weather, and even a thick enough hoodie can do a good job if you wear a long-sleeve shirt underneath.

Also, I would recommend that you pack a waterproof and windproof jacket since winters on the Adriatic coast include a lot of rain and wind. It doesn’t necessarily have to be insulated with anything – fleece lining should be warm enough for mild Dubrovnik winters.

In terms of footwear, you should be okay with some waterproof boots with a sturdy, non-slip sole. Dubrovnik streets don’t get icy, but the cobblestone alleys can be very slippery after rain. Boots with non-slip soles are great for comfortable walks, and on warmer and drier days, you can get away with wearing your favorite sneakers!

The only accessory you’ll need in Dubrovnik in winter is an umbrella. I’d recommend buying a high-quality umbrella since those flimsy ones that you can get in the cheap shops in Dubrovnik usually get obliterated by the wind. 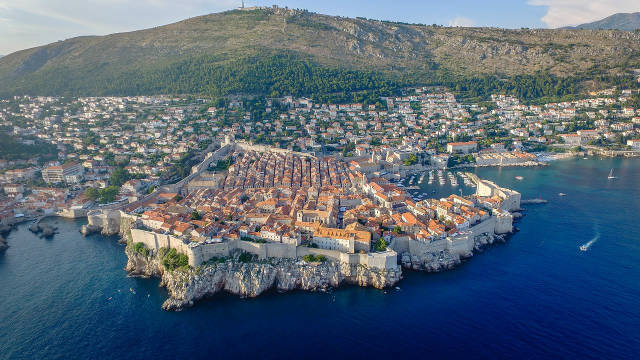 Dubrovnik is home to many iconic landmarks, and you can see them all during your trip to Croatian city. Read on to see which places in the city you should visit during your winter holiday, as well as what places close to Dubrovnik are interesting enough to warrant a day trip! 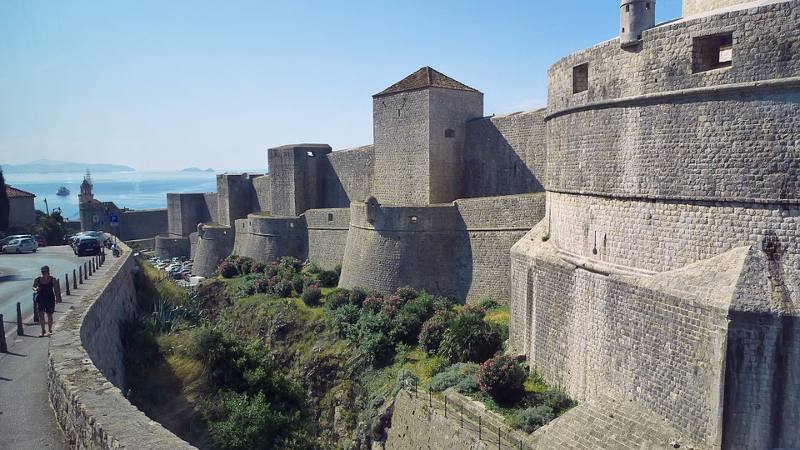 The old city walls that encircle Dubrovnik’s old town are one of the most iconic landmarks in this city. They offer spectacular views of the Dubrovnik old town and the Adriatic Sea, as well as views of some of the city’s most famous landmarks.

Dubrovnik City walls are some of the oldest landmarks in this city. Parts of the walls were constructed as early as the 8th century, but the most systematic construction was done in the 15th and 16th centuries. Their purpose was to fortify and protect the ancient town of Dubrovnik, and it’s worth noting that they were constructed so well that the earthquake in 1667 did barely any damage to them.

A walk along the city walls is a must for any tourist in Dubrovnik. It’s a great way to experience the old town in a different way, plus the views outside the walls are just out of this world. 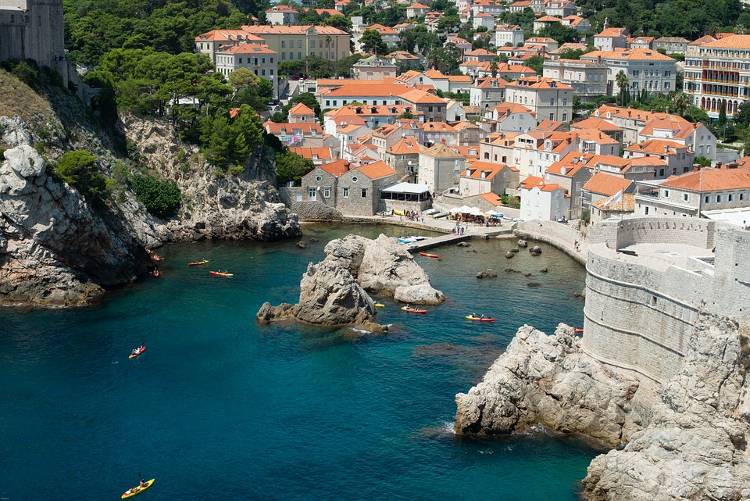 The Walls of Dubrovnik are also home to a few popular restaurants and bars, the most notable of which is Restaurant 360. It’s one of the ten restaurants in entire Croatia that has a coveted Michelin star, so it’s definitely the best place in the city if you’re looking for some truly amazing food.

The restaurant is situated on the northeastern city walls, overlooking the port of Dubrovnik. The food is exquisite, and the views from the tables are even better.

It’s worth noting that it can get very windy on the city walls. Wear a warm, windproof jacket for the most comfortable experience, and be extra careful if you’re walking the walls shortly after rain. The walls can be quite slippery when wet and considering they’re 22 meters tall in certain areas, it’s best to just wear sturdy boots and not worry about slipping and potentially falling. 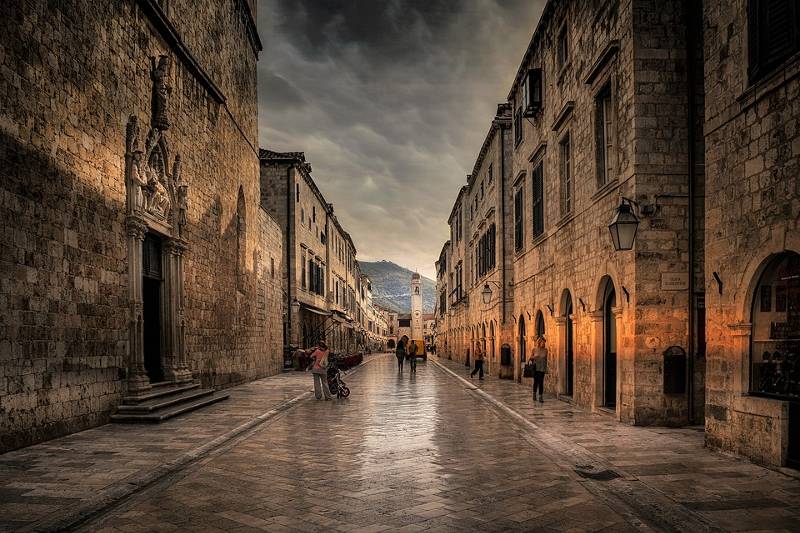 Whether you visited Dubrovnik already or this is your first time in the Pearl of the Adriatic, a walk through the Dubrovnik old town is a must. It’s the heart of the city with all the iconic landmarks that make it so special.

It’s also where the Dubrovnik Winter Festival is held every winter from late November to early January, as well as the place where the city’s New Year’s Eve celebrations take place. The old town is also home to the Dubrovnik Christmas fair, which features numerous wooden stalls that sell everything from mulled wine to traditional Croatian snacks. 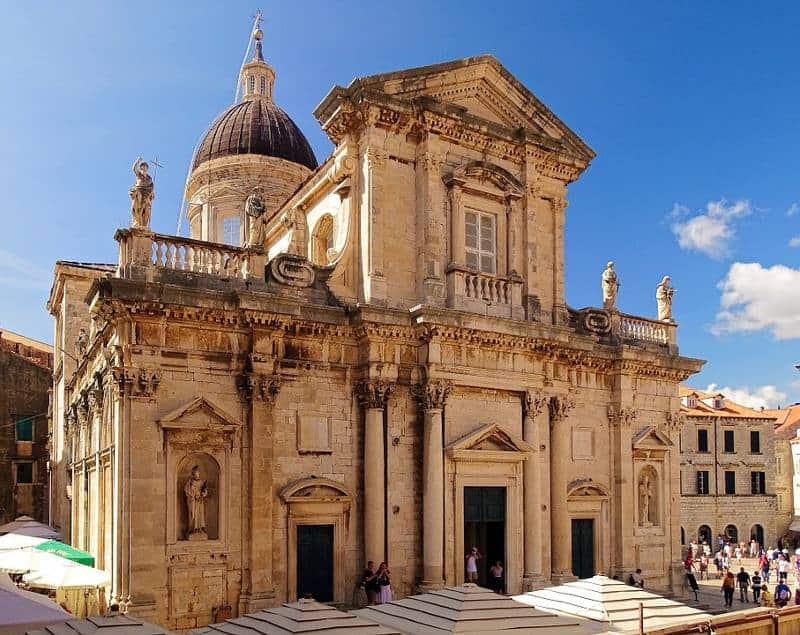 Some of the top highlights of Dubrovnik’s old town include the St. Blaise Church, Stradun street, the Sponza Palace, Orlando’s Column, the Dominican Monastery, and the Old Town Port. You can explore all these on a thorough walk through the old town, so keep an eye out for these popular landmarks.

Additionally, it’s worth noting that the old town hosts the Dubrovnik carnival every February. It usually lasts for four days and takes place in several locations throughout the city, and it’s honestly a spectacular sight and very different from what you’re expecting to see in this Croatian city.

Sokol Tower is about a 40-minute drive away from Dubrovnik, and it’s one of the best day trips from this beautiful city. It’s an ancient fortress from the Dubrovnik Republic built into a 25-meter cliff. However, the fortress hadn’t come into the possession of the republic until the 15th century, and it’s worth noting that there is evidence that there was life in the fort even in prehistoric times.

The Sokol Tower was left to decay after the 17th century, and restorations hadn’t begun until the late 1960s. They lasted for decades, and in 2013 the fascinating fortress was opened for public visits.

Visit the fort if you want to learn even more about the history of Dubrovnik and enjoy some spectacular views. The entrance is about 70 kunas for adults, and it’s worth every penny if you want to experience this fascinating location.

It’s worth noting that there are a lot of stairs at the Sokol Tower, so the place isn’t at all wheelchair accessible. Exploring the tower requires a lot of walking and wearing comfortable shoes is the way to go.

In addition to the ancient fortress wall, you can also see quite a few cannons, various objects that were found here (some of which date back to the Bronze Age), and even ancient weapons.

Also, the view from Sokol Tower is absolutely breathtaking, even on rainy and gloomy winter days. 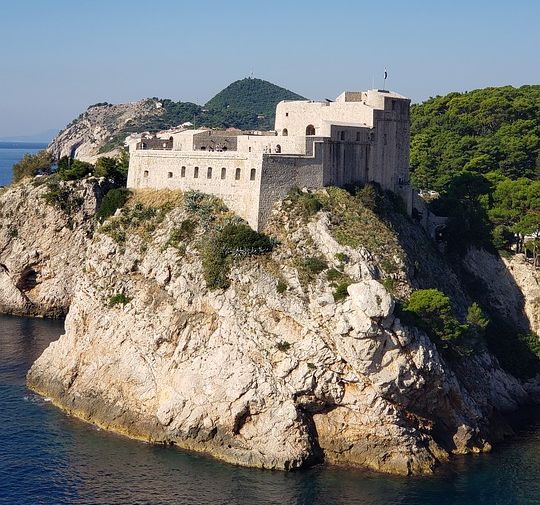 Dubrovnik has always been a popular location among those who visit Croatia, but its popularity has increased significantly since it was featured in Game of Thrones. The popular TV show really put this charming town on the map, and now there are countless tourists who visit specifically to see the locations featured in the series.

Dubrovnik was the main site for all scenes filmed at King’s Landing, and you can go on Game of Thrones tours that will take you to all the different parts of the city that were featured on the show.

You can also visit them on your own. The old town, the city walls, the Pils Gate, the Minceta Tower, Lokrum Island, Lovrijenac Fort, and Trsteno Arboretum were all featured on Game of Thrones, so be sure to visit them all to complete your Game of Thrones tour of this magical city!

Book the guided tour if you want to see all the locations without having to plan out how to get to them. Traveling to the island of Lokrum can be a bit tricky – a guided tour will include this trip, and you won’t have to worry about the logistics at all! 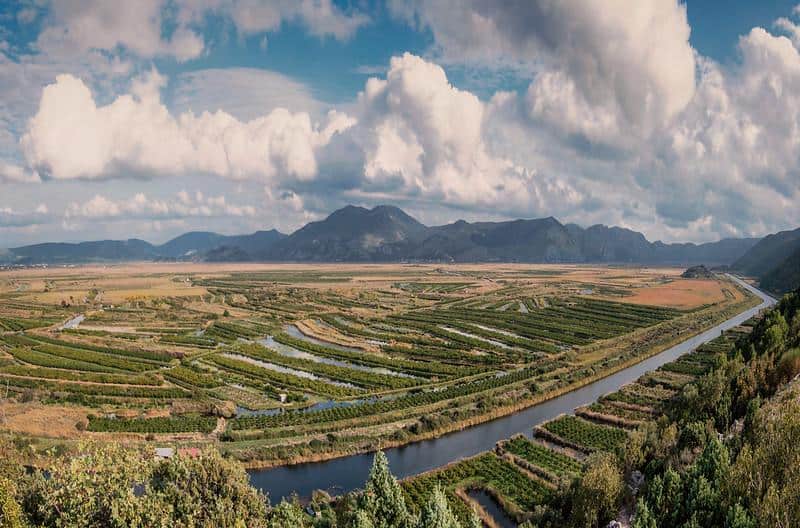 Winter is the peak season for Neretva River Valley visits because that’s when the mandarin harvest season starts. Over the years, this has become a surprisingly popular tourist attraction, and countless foreigners visit Croatia to take part in the harvesting of mandarins.

If this sounds like something you’re interested in, then plan a trip to the Neretva River Valley while you are in Dubrovnik. The mandarin orchards are situated north of Dubrovnik, between the towns of Ploce and Opuzen. This valley is locally known as the California of Croatia, due to the incredibly rich and fertile soil.

Mandarin harvests usually begin in late September and last for some three months, so you have a chance at participating in this event if you’re traveling to Dubrovnik in December. Up to 60 thousand tonnes of mandarins can be harvested during this period, which is certainly impressive! 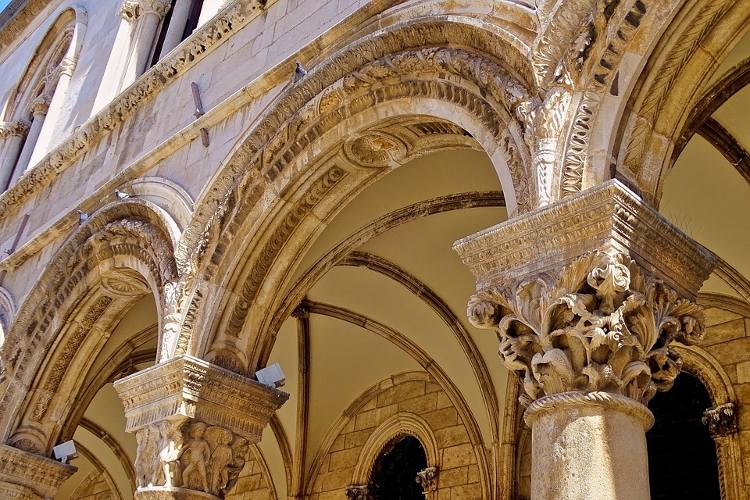 The Rector’s Palace is a striking Gothic-Renaissance mansion in the old town of Dubrovnik. It was constructed in the 14th century, and it previously functioned as the seat for the Rector of the Ragusa Republic.

It’s worth noting that the 14th-century palace was constructed only after the previous palace in its place was destroyed in a fire. Since then, it has become an unmistakable symbol of Dubrovnik, and one of the most iconic historic landmarks in it.

The palace is home to the Cultural History Museum of Dubrovnik, so visiting it allows you to explore two of the city’s best-known landmarks. Also, Rector’s Palace hosts various events during the Dubrovnik Summer Festival, and throughout the year it’s where the concerts of the Dubrovnik Symphony Orchestra are held.

The Dubrovnik Cultural History Museum is situated in the Rector’s Palace, and it’s one of the most popular museums in this charming city. It was first founded as the Patriotic Museum in 1872, which wasn’t moved to the Rector’s Palace until 1950.

The collection of the original museum was quite small, with various objects that detailed the cultural history of Dubrovnik. But, the expansion of the collection was constant, and it was done more systematically after WWII.

After the museum was moved into the palace, it first became a department of the Dubrovnik Museum, and later on, it became the Cultural History Museum.

It’s one of many components of the Dubrovnik Museums, with a collection that details the rich cultural history of this fascinating city. There are more than twenty thousand objects in the museum’s collection today, dating between the 15th and 20th centuries.