The mitten-shaped state of Michigan is famous for the stunning shores of the Great Lakes, tranquil forests, and the big city of Detroit, affectionately known as Motor City or Motown. The Wolverine State abounds with nature and history, and the foodie and craft beer scene thrives.

But this diverse and picturesque state is best discovered by going off the beaten path to explore some of the lesser-known places. Here are a few of the many hidden gems you’ll find tucked around the state of Michigan. 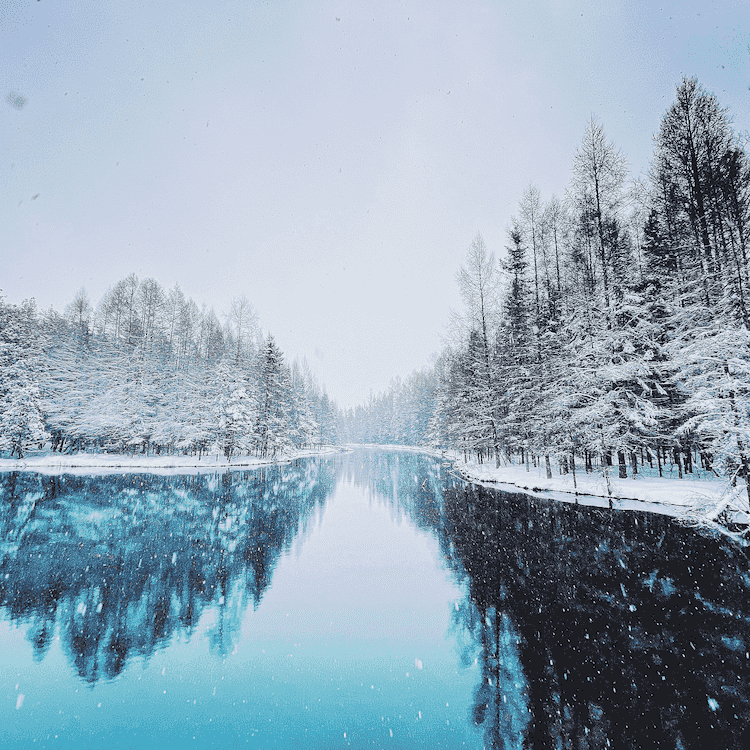 Kitch-iti-kipi is an enormous freshwater spring tucked away in Palms Book State Park near Manistique in Michigan’s Upper Penisula. . The word “Kitch-iti-kipi” means big cold water in English, and the spring is often called The Big Spring.

The pool is over 40 feet deep, and the water gushes up to 10,000 gallons per minute. The blue water is so crystal clear, Native Americans called it “The Mirror of Heaven.” You’ll be able to see fish and fallen ancient trees covered in minerals.

The water of the spring bubbles up year-round from fissures in a bed of limestone, but it’s unclear exactly where the water comes from. The best way to see the big spring is by hopping aboard a designated observation raft that floats across it. Stay in Manistique and come early to avoid the crowds in summer.

Related: The best museums in Michigan

Electric Forest is a multi-genre musical event held in Rothbury, Michigan that focuses on electronic and jam bands. First held in 2018, it was called the Rothbury Festival. The popular event drew a crowd of around 45,000 in 2015, and Electric Forest was nominated for Festival of the Year at the Electronic Music Awards in 2017.

The four-day event includes one weekend, although in 2017 and 2018 the festival expanded to include two weekends back to back. In 2019, the festival returned to a four-day one-weekend schedule. It was canceled in 2020 and 2021 because of the Covid-19 pandemic. The festival is co-produced by Insomniac Events and Madison House.

Located on a deserted part of Lake Superior’s shore 35 miles north of Newberry, Crisp Point Lighthouse is one of the loneliest and loveliest lighthouses in the Upper Peninsula. It was built on the edge of an ancient forest that is still largely unexploited. The graveled road is long and seemingly endless, but well-marked.

It passes through the Lake Superior State Forest. Many visitors choose to visit it with an OTR vehicle. Once you get there, you’ll know why the gift shop sells t-shirts with the slogan “I survived the road to Crisp Point Lighthouse.”

The lighthouse was activated in the spring of 1904 and served as A Life-Saving Station to save shipwrecked sailors on stormy Lake Superior. The five-room station house had space for the Keeper, Serfmen, surfboats, and life-saving equipment. It was named in honor of Christopher Crisp, the first keeper, and famed lifesaver. 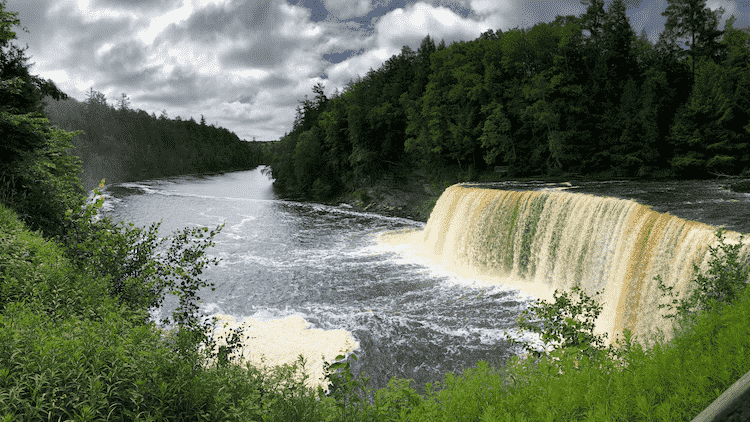 Tahquamenon Falls State Park is set on 50,000 acres of gorgeous backcountry and stretches for 13 miles. Most of the land is undeveloped and free of buildings, roads, and power lines. The locale is aptly named Paradise, Michigan. The Upper Falls takes center stage at the park.

The thundering waterfall, one of the largest east of the Mississippi River, is over 200 feet wide and has a drop of 50 feet. The maximum flow recorded is over 50,000 gallons of water per second. A fine mist surrounds the magnificent falls.

A few miles further along, the Lower Falls is a series of five smaller falls cascading down to a tiny island. Although not as dramatic, the Lower Falls are nonetheless quite impressive. The Lower Falls can be seen from the riverbank or from the island which is reachable by renting a rowboat at the park concession.

It takes a bit of a drive to get to this state park, but well worth the effort. It’s located about 1.5 hours from the vacation rentals near the Mackinac Bridge. The park is popular for cross country skiing and snowboarding in winter.

Tucked in the wilderness around Lake Superior amidst a rugged archipelago, Isle Royale National Park is a true hidden gem. The archipelago is comprised of 450 islands with over 160 miles of wilderness trails and four lighthouses. There are no cars in the park, and shipwrecks dot the surrounding waters. The only way to get there is by ferry or seaplane.

Isle Royale is one of the least visited national parks in the US, yet it ranks as one of the most revisited according to National Geographic’s “Best of the World” list for 2021. The lack of visitors is probably due to its remote location and the fact that it’s only open from mid-April to October because of the harsh winter conditions.

The majority of the park’s 133,782 acres are an amazing hiking destination and a place to truly get away from it all. The park has several designated historic landmarks to recognize the significance of copper mining at Minong Mine, historic structures, and shipwrecks.

The Blooming Mystical Lavender Labyrinth is a spiritual destination at Cherry Point Farm in Oceana County, Michigan. One of the oldest of its kind, the farm has existed since 1871. A walk through the labyrinth is a symbolic spiritual journey of life. The stone circle in the center is designed according to the principles of sacred geometry. The 36 herb beds follow a 12 point vesical pattern.

The 300 square foot labyrinth is free to walk through, and a market on the grounds sells homemade jams and jellies and fresh-baked bread and pastries. Both are open from April through October. To experience the fragrant beauty of the lavender, mid-July is the best time to visit. The gardens are fragrant with other herbs throughout the summer.

Experience the thrills of an alpine ride on the slopes of Crystal Mountain with a wild ride on the Crystal Coaster Alpine Slide. The Loki Quad chairlift takes you to the top of the mountain where you will hop on a specially designed sled to maneuver down a 1,700 foot-long curved track.

The two parallel tracks are 250 feet high. The sled has wheels at the bottom controlled by the rider. Pushing or pulling the lever controls speed. The action-packed ride on the Michigan mountain coaster features dips and dives with stunning views.

Reservations are required for the alpine ride in the summer. Tickets are sold in one-hour blocks, and guests can ride as many times as they like within an hour. Solo riders must be at least 52 inches tall.

Other activities at the Crystal Mountain Resort and Convention Center include an outdoor hot tub, horse-drawn surrey rides, and skiing, and ice skating in winter. 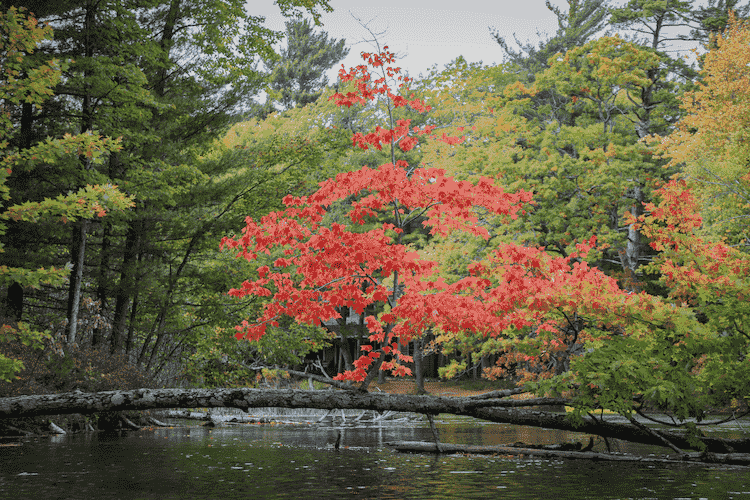 The Sleeping Bear Dunes National Lakeshore is visited by thousands each year, but the nearby Platte River is a hidden gem often overlooked. The river is located in the northern section of the Lower Peninsula. The river originates at the outlet of Long Lake, and the mouth of the river lies within the national lakeshore. The rest of the 29.5-mile long river lies within the Pere Marquette State Forest.

Tubing down the river is a favorite outdoor adventure at Platte River. Visitors cool off on a hot summer day as the river’s current takes them gently downstream. Tubes are provided by local outfitters in Honor and a shuttle service is available.

Honor is a village within the Homestead Township on US Highway 31.

Pictured Rocks National Lakeshore on the Upper Penisula is a spectacular area with around a hundred miles of walking and hiking trails. Chapel Rock is a hidden gem in the area often overlooked since most visitors opt for the more easily accessible Miners Castle. But if you drive the gravel road to the Chapel Rock trailhead, you’ll be rewarded with smaller crowds and even more stunning views.

The three-mile round trip trail leads past sandstone gorges and Chapel Falls to Lake Superior Beach where you’ll find Chapel Rock, a free-standing sandstone pillar topped by a lone fir tree estimated to be around 250 years old. The pillar is made from ancient Cambrian Age sandstone carved by the high waters of Lake Nipissing around 3800 years ago.

You can also reach Chapel Rock by kayak. Tour boats don’t stop here, so hiking and paddling are the only ways to get to Chapel Rock. In winter, you must use skis or snowshoes.

Lake of the Clouds, Ontonagon

The Lake of the Clouds is hidden in the forests of the Porcupine Mountains Wildnerness State Park in the northwestern part of the Upper Penisula. The shimmering blue lake is one of the most beautiful spots in Michigan and the entire country. It’s especially popular with hikers and Instagram photographers who say the lake appears like a mirage.

The lake can be reached by hiking the Big Carp River Trail and the Escarpment Trail. Choose from short day hikes along well-groomed trails or hike the backcountry past cascading waterfalls. Visitors who don’t wish to hike can get spectacular views of the lake by driving to an easy-to-access overlook.

The lake can also be fished for bass, but no boats are allowed, and the fishing is catch and release only. A three-quarter mile hike makes it possible to carry lightweight watercraft. The area is open all year for seasonal beauty, but roads may be closed after a heavy snowfall.