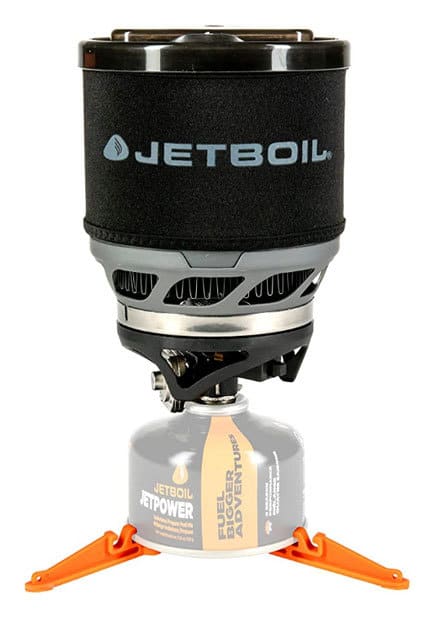 The Jetboil MiniMo is designed for backpackers that like to whip up gourmet food on the trail. Its integrated cooking system has everything you need to cook up tasty treats on the trail, and its boil time and fuel efficiency are pretty impressive too – no wonder this is one of Jetboil’s best sellers. View Latest Deal 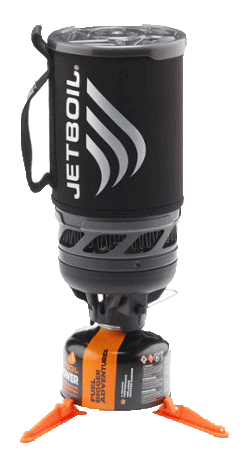 The Jetboil Flash is Jetboil's fastest and most powerful stove to date. With an astounding boil time of just 100 seconds, you're never far from a heartwarming drink, and its thermochromatic color-change heat indicator even tells you when your water's ready - perfect for those chilly mountainsides! View Latest Deal

Founded in 2001, Jetboil has become a world-renowned manufacturer of portable stoves. Famous for their durable products and thoughtful features, Jetboil stoves receive constant praise from the backpacking community.

With a variety of stoves designed for different purposes, it’s always possible to find a Jetboil stove to suit your needs. Here, we compare and contrast two of Jetboil’s most popular stoves – the Jetboil MiniMo and the Jetboil Flash.

As we shall see, each has its own pros and cons, but both are extremely reliable integrated cooking systems and, in all honesty, we’d be thrilled to have either by our side on our next camping trip. However, in this review, we’ll go through some key performance considerations so that, whichever stove you go for, you can be sure you’ve made the perfect choice for you. 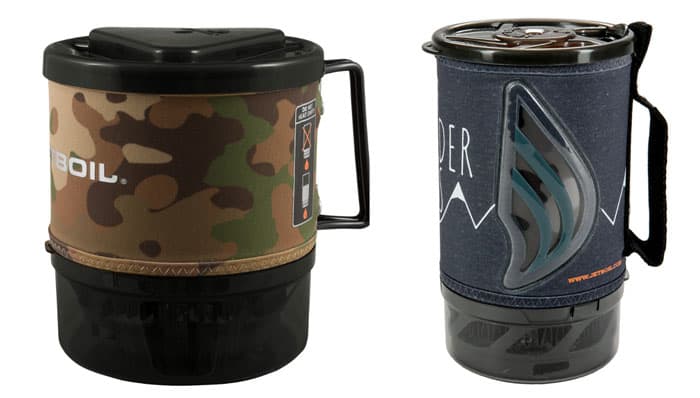 So, what exactly do we mean by ‘integrated stove systems’? We’re referring to an all-on-one stove set that comes with a burner, heat exchanger, and a cooking pot – basically everything you need to heat up a meal or knock up a hot drink.

Both the Jetboil MiniMo and the Jetboil Flash are integrated stove systems that come with the stove itself, a fuel can stabilizer, and a cooking pot with a lid that can be used as a measuring cup or a bowl.

The crucial difference between these two integrated systems is the cooking pot. Although both pots have a 1L capacity, making them great for cooking for one or two people, the shapes of the pots differ. The MiniMo cooking pot has a short, broad design whereas the Flash has a taller, narrower pot. Although the broad design accommodates a low spoon angle, making it easier to get at your food, the taller pot means less food is exposed to the air at once, and so your meal will stay hot for longer, so we’d probably prefer the tall design.

The pots also differ in terms of their handles. Both pots have insulating neoprene jackets to retain that precious warmth, and the pot that comes with the Flash has a handle built of this same material. The handle lacks rigidity, so you need to be careful when lifting a full cup, but it does the trick. In contrast, the MiniMo comes with sturdy metal handles that hold their shape even when your pot is full.

Overall, there isn’t much difference between the two sets but, if we had to pick a favorite, we’d go for the MiniMo thanks to its solid handle. 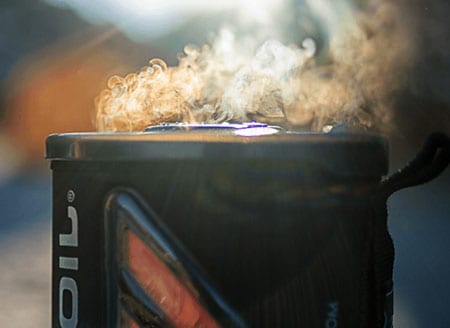 The major selling point of the Jetboil Flash is, as its name suggests, its ability to boil water in a flash (100 seconds per half a liter, to be precise). This is great when you’re in cold environments, tired from a long day’s hiking, and you want is something to warm you up ASAP. Furthermore, the Jetboil Flash has a handy thermochromatic color-change indicator so you know exactly when your water’s ready, so you can sit back and relax until the last moment.

In contrast, the Jetboil MiniMo takes a little longer to reach boiling point (135 seconds per half a liter), but it’s still pretty rapid compared to most competitors on the market. It doesn’t have an indicator to tell you when your water’s boiled though, so you might end up bobbing up and down and checking on it a few times, adding to the overall boil time even further.

Although knowing that hot drink is never more than 100 seconds away is a very comforting thought, this rapid boiling time does come at a price. The Jetboil Flash requires more power to achieve this speedy boil time, which means you can boil less water overall per fuel canister than you can with the MiniMo (10L versus 12L per Jetpower can).

Ultimately, it comes down to how patient you are, which will probably come down to the climate you’ll be in. For summer camping trips, waiting half a minute more for your cup of tea probably doesn’t mean much and you’d probably rather extend the life of your fuel canister. However, if you’ll be camping in the rain, snow, or extreme cold, that half a minute might make al the difference. Overall though, both stoves heat water pretty quickly without burning fuel like there’s no tomorrow. 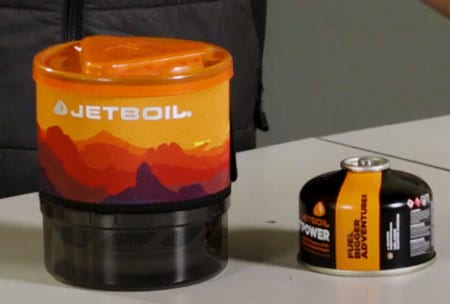 All good camping stoves should be nice and portable, especially if you’ll be carrying them on your back for days. However, ultralightweight stoves have their downfalls too – they tend to be more affected by the wind and rough terrain and are often generally less stable to use while cooking. So, how do the Jetboil Minimo and Flash perform in the portability department?

With the MiniMo weighing in at 14.6 oz and the Flash at 13.1 oz, they certainly aren’t the lightest stoves out there, that’s for sure. Having said that, you are getting an entire cooking system for the weight. Purchasing a non-integrated stove may seem like it will save you weight at first, but you’ll end up buying extra pots and pans to go with it, which will add to the overall weight of your pack.

Another huge bonus of integrated stove systems in terms of portability is that all the pieces are designed to go together. In the case of the Jetboil MiniMo and the Jetboil Flash, this means that all the components fit snugly inside the cooking pot itself, minimizing the amount of pack spaced used and reducing the chances of you forgetting anything.

Ultimately, if all you want is something ultralightweight to whip up cups of tea, then these probably aren’t the stoves for you. But if you’ll be cooking on the trail, you’re going to need extra gear anyway, so why not opt for one of these integrated stove systems that pack away neatly into one small bundle you can pop in even the smallest of daypacks? If you like the sound of these stoves and you’re undecided between the two, if weight is a concern for you, then remember that the Flash weighs 1.5 oz less than the MiniMo.

Both the MiniMo and the Flash come with one of our favorite stove features – a push-button ignitor. They’re super simple to use and save you heaps of time fumbling around with matches and a lighter (and avoid the disaster of forgetting to bring them with you!). Jetboil’s push-button ignitors are particularly hardy, and they won’t let you down even in frosty temperatures (they operate right down to 20°F).

One critical difference between the two stoves, however, is the flame control. The regulator technology used for the MiniMo provides excellent simmer control, and the incredibly small increments in heat allow you to sauté and simmer to your heart’s content. The Flash is lacking this awesome feature, although if you plan on cooking basic meals, you probably won’t miss it and might prefer to save some pennies and stick with the Flash.

Overall, both stoves hade ignitors that we love, but the MiniMo certainly trumps the Flash in terms of flame control, although how important this is will depend on your meal plans.

This probably isn’t the most important factor when choosing a backpacking stove, but it’s not to be dismissed entirely either – after all, when you’re on the trail, you’ll be looking at your stove fairly often.

We love the overall look of both of these stoves – small and sturdy. The insulated cozies that surround the cooking pots are available in various jazzy colors, although our personal favorite is the Minimo with orange.

There’s not much in it, but we reckon the MiniMo looks a bit more solid, as its shorter pot looks less likely to topple in the wind, and the handles are upright and firm, unlike the handles on the Flash.

They both come with included fuel canister stabilizers too, so for your money, you get a highly durable, compact, and stable stove that you can depend on when you’re out in the back and beyond. On top of that, they each have some cool extra features, such as their push-button ignitions and simmer control on the MiniMo and boiled water indicator on the Flash.

All things considered, both stoves offer great value for money – but which one does best in this category? The MiniMo costs around 1.5 times as much as the Flash (depending on the seller), which is quite a significant difference. Although we love the simmer control feature, we think this is a big price jump to pay for it, so we’d probably say the Flash offers more bang for your buck overall.

So, we’ve been through what makes the Jetboil MiniMo and Jetboil Flash cooking systems so special, but which one is our favorite?

This is an incredibly tough call to make. Both stoves come as fully integrated cooking systems that pack away neatly inside the included cooking pot. They’re full of nifty features, such as the measurement markings on the lid and push-button ignitors, that set them apart from other stoves in their price range.

Ultimately, the decision of whether to go for the MiniMo or the Flash will depend on the types of food you’ll be preparing and whether you’re planning trips in warm or cool weather. The MiniMo, with its incredible simmer control, means you can bring a touch of luxury to the outdoors. Plus, the broader pot design and solid handles make it easier to eat out of and less likely to topple in the wind. Plus, if you’ll be camping in warm seasons, you probably don’t mind waiting an extra half a minute for your water to boil and would rather wait and save the fuel.

However, if all you’re after is something to whip up cups of tea with and to cook up some simple meals, then you probably won’t miss the simmer control and may as well save yourself some money and go for the Flash. Plus, if you often find yourself up snowy mountainsides, you’ll appreciate the incredibly rapid boil time of the Flash that means you don’t have to wait around in the cold. The Flash is slightly lighter than the MiniMo too, so it’s a little easier to lug around.

In summary, any budding chefs out there should splash a bit of extra cash and go for the MiniMo. Otherwise, the Flash will do the trick and save you some pennies. But either way – we highly doubt you’ll regret buying either of these fantastic backpacking stoves!