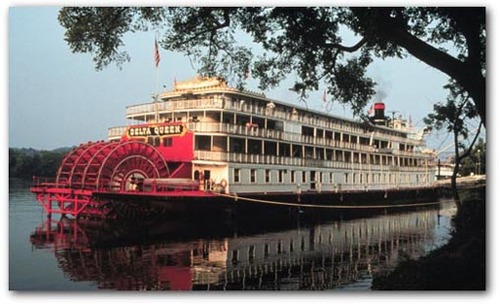 KIMMSWICK, Mo.–(BUSINESS WIRE)–The Delta Queen Steamboat Company announces that its new corporate headquarters will be located just south of St. Louis in Kimmswick, Mo. which has also been selected as the new homeport for the Delta Queen. The city of Kimmswick is excited that the legendary Delta Queen, whose history dates back to 1927, has chosen Jefferson County for its homeport and operations base.

“To have a boat designated as a National Historic Landmark and on the National Register of Historic Places is a wonderful addition to both the city of Kimmswick and Jefferson County. What a perfect location for its homeport!”

“The Delta Queen will not only develop a greater awareness of Kimmswick as a historical destination but will re-establish the city as an important American riverboat district as it was in the late nineteenth century,” said Philip Stang, Mayor of the city of Kimmswick.

According to the Jefferson County Economic Development Corporation, the St. Louis region will experience a massive economic impact, creating more than 170 jobs locally and bringing in more than $36.4 million to the St. Louis Region annually. It is expected that the Delta Queen will begin and end a number of its cruises each year in Kimmswick and will visit more than 80 other ports in the U.S. including:

“The substantial economic impact this will bring to Jefferson County and the region will affect every facet of the community in a positive way creating the kind of growth and opportunity that we haven’t seen in a long time,” said David Dews, Chairman of the Economic Development Corporation of Jefferson County.

“We are delighted to welcome the Delta Queen to the shores of our hometown,” said Jon Selsor, President of the Jefferson County Port Authority. “To have a boat designated as a National Historic Landmark and on the National Register of Historic Places is a wonderful addition to both the city of Kimmswick and Jefferson County. What a perfect location for its homeport!”

The Delta Queen began service as an overnight passenger vessel in 1927, carrying passengers, cargo and automobiles between Sacramento, Calif. and San Francisco, Calif. After a brief period of service in the U.S. Navy during World War II, the vessel was sold as war surplus to Captain Tom Greene, owner of the Greene Line Steamers of Cincinnati, Ohio.

From 1946 to 2008, the Delta Queen operated as an overnight cruise vessel along many of the prominent rivers and waterways running through America’s heartland and deep South, including the Mississippi, Ohio, Tennessee, Cumberland and Arkansas Rivers. The vessel operated as a dockside hotel in Chattanooga, Tenn. from 2009 until 2014.

“We are thrilled to designate the port of Kimmswick as the new homeport for the Delta Queen and look forward to returning the city to the important American riverboat town it once was,” said Cornel Martin, President and CEO of Delta Queen Steamboat Company. “The Delta Queen is the last authentic overnight steamboat in America and the city of Kimmswick and Jefferson County are a fitting home as they perfectly represent the history and nostalgia of America’s steamboat era.”

The Delta Queen, which is listed on the National Register of Historic Places and is classified as a National Historic Landmark, was purchased by the current owners in February 2015 with the goal to restore the vessel and return it to overnight cruise service. The steamboat has also recently been designated by the National Trust for Historic Preservation as a National Treasure.

The officials of the Delta Queen hope to have the vessel back in service in 2016 but must first secure a Congressional Exemption to allow the vessel to return to the overnight cruise trade. Anyone interested in seeing the iconic Delta Queen cruise again should contact their U.S. representative and senators and urge them to support House Bill 1248 and Senate Bill 1717.

For more information, go to www.DQSteamboat.com or visit the Delta Queen Steamboat Company on Facebook and Twitter.

The Delta Queen Steamboat Company was founded in 1890 and originally known as The Greene Line. The company is made up of several long-time supporters and former employees of the Delta Queen steamboat. The mission of the company is to preserve, restore and return the legendary Delta Queen to overnight cruise service through the inland rivers of America’s heartland.