Most Beautiful Streets In Rome

Of all the famous cities around the world, it’s little wonder that Rome is at the top of the list for world travelers. Wandering through the cobblestone streets, you’ll find yourself immersed in over 3,000 years of history with famous sights like the ancient Colosseum, Trevi Fountain, and the Vatican City with its fascinating trove of art and architecture.

However, to discover more of the Eternal City’s hidden history and beauty, stay off the tour buses for a day or so and wander the streets without wondering where you’re going. Here are some of the most beautiful streets in Rome begging to be explored. 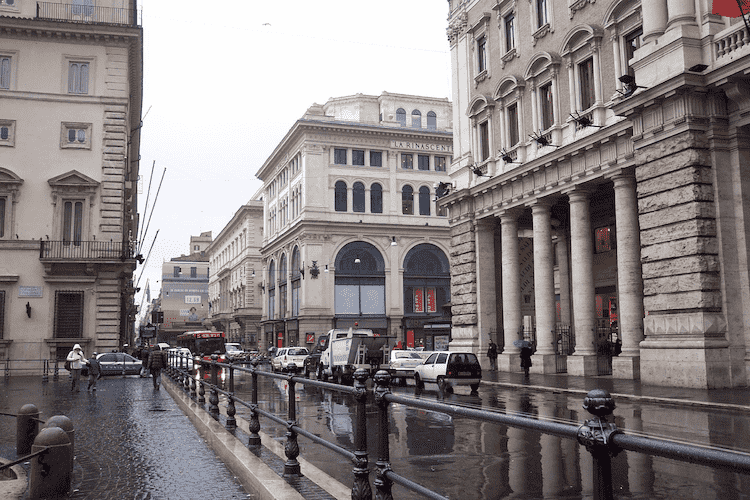 Via del Corso is one of Rome’s most important streets as well as one of the prettiest. It’s part of the Trident, a complex of roads formed by three straight streets leading away southward from Piazza del Popolo in the shape of a trident. Compared to the historical streets surrounding it, Via del Corso is very broad and much straighter.

Adding to this street’s beauty is a Plethora of historical landmarks and churches. It’s also lined with various shops where locals and travelers come for the artisan workshops and high-end boutiques. Located in the heart of Rome, Via del Corso is a favorite street for evening strolls.

Situated near Piazza Navona and the statue parlanti in Piazza Pasquino, Via del Governo Vecchio runs between Piazza di Pasquino and Piazza del Orologio. The name of the street means “old government” and the papal government was once located in a palazzo here with activities continuing until the mid-18th century.

Many of the buildings on Via del Governo Vecchio date back to the 15th and 16th centuries. The cobblestone street gives a picturesque glimpse into Old Rome. Via del Governo Vecchio is a favorite street in Rome for shopping. You’ll find lovely cafes, vintage clothing shops, quaint wine bars, and coffee shops. Be sure to look for what is known as the smallest house in Rome at No. 65.

The tiny house is wedged between two other buildings. All you can see is a small terrace and a window facing the street. But the most striking place is the palace located at Via del Governo Vecchio, 104. Recently restored, it’s now easier to see the beautiful friezes adorning the outside.

Surrounded by stately cultural buildings, awe-inspiring churches, and a grand palazzi, Via Giulia is one of Rome’s oldest streets. The Eternal City’s ancient streets served as a transit for the Roman Empire. Known as “viae,” they were used for communication and to more troops across the Empire.

Named in honor of Pope Julius ll, the cobbled one-kilometer long Via Giulia was designed by Bramante in the 16th century at the pope’s order. Here you’ll see the unfinished Arco Farnese (viaduct) designed by Michelangelo now completely swathed in lush ivy.

The arch was part of an unrealized plan to unite the Palazzo Farnese with the Villa Farnese across the Tiber River. Today, it serves as an elaborate passageway.

You’ll also find some of Rome’s most lavish private residences along Via Giulia. The street has long attracted the wealthiest Romans. Shoppers come here to browse the lovely artisan shops. 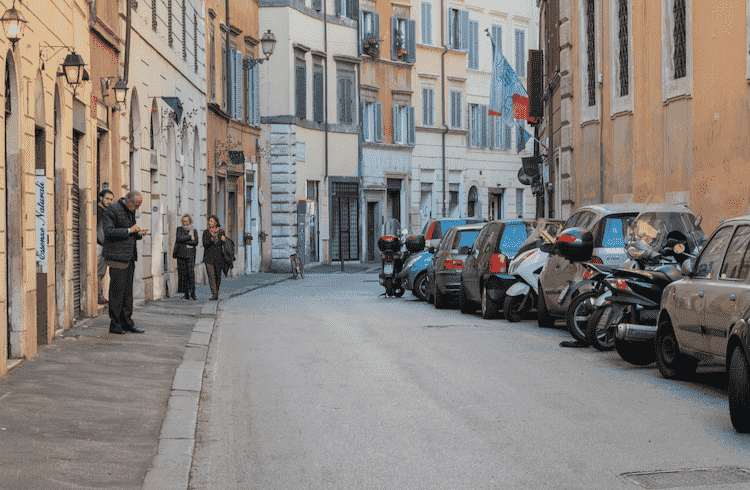 This small cobblestone street is charming, quiet, and a center for locals. Running parallel to the Corso Vittorio Emanuelle II, another old Roman street Via dei Banchi Vecchi is lined with modest churches, small boutiques, art galleries, studios, restaurants, and local organic shops. Perfect for a quiet stroll and a little shopping, the street draws visitors to tour the churches, admire the street shrines, and experience a local atmosphere.

Filled with centuries of history, the Via di Santa Sabina is a beautiful serene street located on top of the Aventine Hill. The Piazza Dei Cavalieri di Malta and the secret keyhole are at one end and at the other end, you’ll find the Circus Maximus, an ancient chariot-racing venue, and a lovely rose garden.

Stop and admire the fascinating churches of Sant’Alessio and Santa Sabina, and the Giardino Degli Aranci (Orange Garden). A popular scenic park, the Orange Garden has stunning views of St.Peter’s Basilica and the city’s rooftops.

This ancient Roman street is known for its display of nature as well as its intriguing historical landmarks. It runs past several gardens along with the Giardino Degli Aranci and a rose garden.

Via dei Coronri is a quiet street that allows you to escape the hustle and bustle of the nearby Piazza Navona. It’s a hidden gem for travelers wanting to get away from regular tourists. The peaceful street has existed since Roman times but was modernized during the Renaissance. It’s known historically for throngs of rosary sellers, and the name Coronari is Italian for the rosary.

It also served as a pilgrim’s path to St. Peter’s Basilica. The narrow cobbled lane, ocher-colored stucco, and vintage storefronts have a historic vibe. A variety of plants grow alongside the colorful buildings. It’s like a sleepy village where time has stood still.

Via dei Coronari is also a good street for art and antique shoppers and vintage clothing and accessories boutiques. Antique fairs are held here in May and October. You’ll also find specialty shops, jewelry stores, decadent gelaterias, and coffee shops along Via dei Coronari. 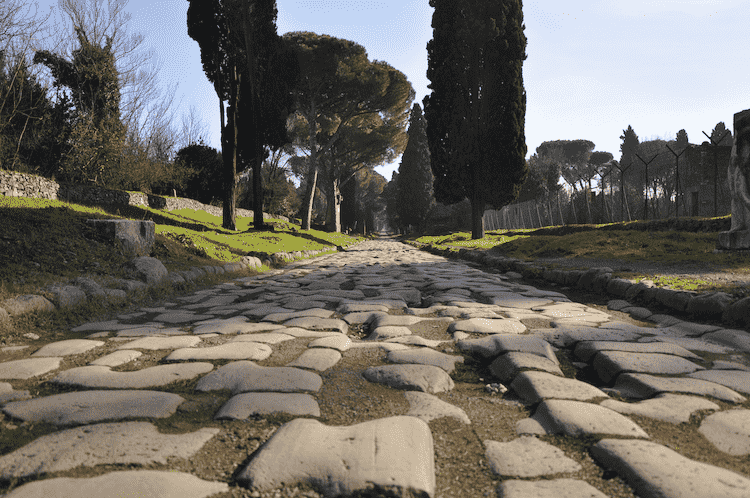 Via Appia Antica is one of Rome’s oldest and most beautiful streets. It lies to the south of the city and is the essence of the saying “all roads lead to Rome.” The road has an enchanting history and was important during Roman times since it connected to the city of Brindisi in Puglia. Because of this, the road seems very long.

The road was built in 312 BC and served as a military artery of the Roman Empire. Today, the atmospheric cobblestone street is perfect for an idyllic stroll. You’ll also find several good picnic spots. Bicycles can be rented at the visitors center.

The roadside is lush with greenery along with fascinating ancient ruins and monuments to the dead. Nearby, take a tour of the historic tomb of Cecilia Metella and the catacombs of several historical characters including San Sebastiano and Santa Domitilla.

This beautiful street in Rome lies parallel to Via Borgona and runs from Piazza di Spagna to Via del Corso. Similar to New York City’s Fifth Avenue or London’s Bond Street, Via dei Condotti is the city’s street for luxury shopping. Window shoppers and “bargain” hunters join the sea of tourists that crowd the street lines with high-end stores.

Via dei Condotti is also home to the famous Spanish Steps, a grand set of steps up a steep slope with the Trinità dei Monti church at the top. The steps are between the Piazza di Spagna at the base and Piazza Trinità dei Monti and are another reason to come to Via dei Condotti other than luxury shopping. Stop by the famous Antico Caffè Greco where celebrities come to have coffee.

Rome’s Via del Pellegrino is named after the pilgrims or “Pellegrini” that passed through it for many years and went from Campo de Fiori to St. Peter’s. Today, the narrow, picturesque street is lined with boutiques, book stores, lively bars, and cafes serving traditional food.

In addition to great shopping and dining, sights to visit include the Arco Degli Acetari with an adorable little courtyard underneath the arch. At the corner of this street and Vicolo del Bollo, you’ll find an ancient fresco from the 18th century depicting the Madonna with Child and San Filippo Neri.

The 15th-century palace of Vannozza Cattanei is at No. 58, and at 66-67 is a Renaissance palace from the 16th century. 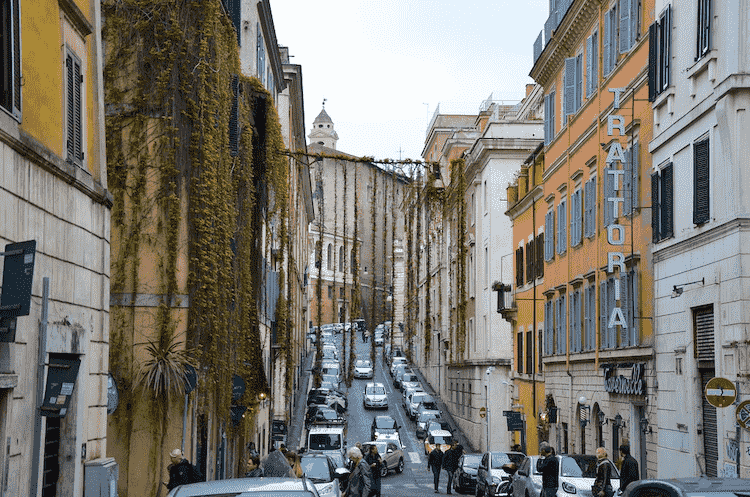 Rome’s Monti neighborhood is known for picturesque streets, but Via Panisperna is the prettiest. Going beyond a curtain of ivy, the sloping street leads to a breathtaking view of the Basilica of Santa Maria Maggiore.

Both locals and tourists come to Via Panisperna for the stylish boutiques and vibrant nightlife, but many are unaware of the street’s historical significance. It is here that in 1934 a group of scientists discovered the existence of slow neutrons while studying at the Physics Institute on this street.

The group included Enrico Fermi who was known as “I ragazzi di Via Panisperna”. The discovery later led to the creation of the first nuclear reactor and ultimately the construction of the atomic bomb.

Located off the beaten path, Via Piccolomini is a Roman hidden gem. It’s a quiet residential street, and very picturesque, but the most interesting thing about Via Piccolomini is its intriguing optical illusion. Traveling up the street by car or motorbike, St Peter’s dome is visible, but as you grow closer, it appears further away.

As you go in the opposite direction, the illusion is reversed as the dome appears to loom toward you. You’ll even notice the illusion with a few clicks on Google Steet View but it’s more effective when viewed in real life.

Situated in Monti, one of Rome’s hippest neighborhood, Via del Boschetto runs from the corner of Via degli Zingari and ends at Via Nazionale. The pretty street is lined with cafes and vintage shops that appeal to every age. Shoppers come for old-school handbags, retro shoes, and vintage accessories and jewelry. You may even see the designers themselves at work in the boutiques.

The word “boschetto” means “little wood” and comes from the efforts of Cardinal Gazanga to plant little elms, gardens, and vineyards on the grounds surrounding the Sant’Agata dei Goti back in the 15th century. 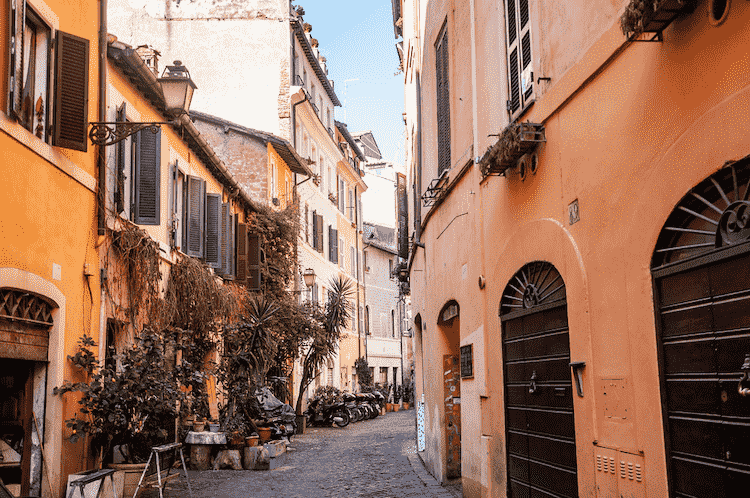 Hidden away on a side street of Camp de’ Fiori, Via dei Cappellari was longer once and stretched all the way to the Theatre of Marcellus, an ancient open-air theater built during the ending years of the Roman Republic. Like many other streets in the area, it’s named after the profession of the people living there, and the name means “hat-makers” street.

Oozing charm and creativity, Via dei Cappallari is lined with unique shops with character and style and is perfect for a long afternoon stroll. The atmosphere is one of a small village and not a bustling capital city. You may even encounter artisans working on the street.

Situated in the heart of the bustling streets and squares around Piazza del Popolo and Piazza di Spagna, Via Margutta is accessible from Via del Babuino. With a history dating back to the 17th century, the narrow, picturesque street is recognized as the place where Gregory Peck and Audrey Hepburn lived in the award-winning movie “Roman Holiday.”

Film shots were taken at Via Margutta 51 B, the studio used by Pablo Picasso where he worked on Jean Cocteau’s play Parade in 1917.

Famous people who have lived here in reality include Federico Fellini, Renato Guttuso, and Giulietta Masina. The composers Debussy, Liszt, and Wagner also had studios here.

Duing Via Margutta’s early years, the street was home to fine craftsmen, workshops, and stables. This attracted Flemish and German artists and those from other regions in Italy. These artists contributed to the street’s history as an art hub. Today, you’ll find a host of art galleries and antique shops. Vine-covered edifices add to the street’s charm.