The North Face McMurdo Parka III is the perfect parka for those chilly winter months. Insulated with responsibly sourced goose down, and featuring a lined hood and integrated face shield, you really will be sung as a bug in a rug in this jacket. It’s constructed from high-quality, durable fabrics, and is covered by a lifetime warranty. View Latest Deal

The North Face has been established since 1966 and seeks to promote a love of the outdoor world. As a company, it strives to manufacture high-quality gear suited to adventurers and athletes alike. What’s more, in recent years, the North Face has committed to improving its environmental and social responsibilities.

Despite producing a range of outdoor gear, jackets are quite possible the flagship product of the North Face. Many have proven so popular that you’re now almost as likely to catch people donning their gear in the street as you are up a mountainside, thanks, in part, to their stylish designs.

Traditionally featuring fur-lined hoods and long hems, and with their origins lying in arctic hunting, parka jackets are meant for life in the cold. Here, we’re going to investigate the North Face McMurdo Parka III to find out if it’s the right jacket for your winter missions. 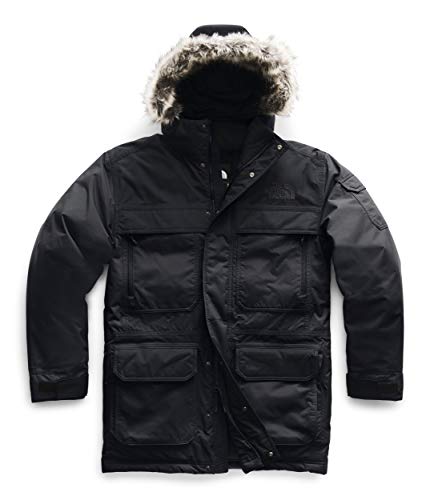 The primary purpose of any parka has to be keeping you warm in frosty conditions. So, how well does the North Face McMurdo perform in this crucial department?

One of the best things about the McMurdo has to be its high-quality down insulation. But what actually is down? Well, it’s made of bird plumage and, in the natural world, functions to keep birds warm. As you might imagine, it’s super soft and fluffy, and it catches warm air as leaves your body and tries to escape to the outside world. This is what makes it one of the best insulators around.

As with all animal products, down products can be somewhat controversial. In fact, there have been cases where the same geese used for producing down have been force-fed and used to produce foie gras (a culinary dish). Fortunately, the down insulation used in the McMurdo has been certified to the Responsible Down Standard, which means that none of the geese underwent any unnecessary harm.

Down comes in a range of ‘fills’, with higher fills meaning greater insulation. The North Face manufactures products with fills ranging from 550-950, so it may seem like they’ve been a little stingy here. However, the higher fills are usually reserved for sleeping bags – this fill is more than enough to keep you toasty while you’re on the move – and this jacket is actually one of North Face’s warmest.

Aside from the insulation, there are other ways jackets can keep you warm. The long hem of the parka helps to trap heat further and will keep your backside dry if you sit on any soggy surfaces. We also love the high rise of the face protector, which basically acts as a mask to keep the lower half of your face protected (but you can unzip it if not needed).

Hoods are another way that jackets can trap precious heat, but here the McMurdo faces some difficulties. Although the hood is nicely padded with down, the zipper (it’s removable) leaves a larger-than-usual gap at the front above the central jacket zipper. This results in a slight ‘wind tunnel’ effect, with cold air storming its way into your hood (and sometimes even knocking it down), which will certainly cause some heat loss. Donning a scarf will help will a casual breeze, but we wish the opening wasn’t as large nonetheless.

Overall, the insulation on this jacket is excellent, but the poor attachment of the hood lets down the overall warmth.

Okay, so the McMurdo does pretty well for warmth overall (just a shame about the drafty hood eh), but a good winter coat will protect you from more than just the cold. Chances are, you’re going to encounter some watery and windy scenarios on the trail, so how will the McMurdo protect you?

This really all comes down to the fabric, and we’re pleased to say that we can’t get enough of North Face’s DryVent fabric. This material uses a polyurethane coating and sealed seams to ensure complete protection against water, so you don’t need to panic if you get caught in a downpour.

But what about wind? The DryVent fabric uses a dual-layer construction comprised of a shell and a lining. This, combined with the down padding, makes for one impenetrable layer.

However, as we mentioned earlier, the large gap at the front of the hood lets a serious draft in. This might be somewhat ameliorated if you could cinch the hood enough but, sadly, that’s not possible. Similarly, the Velcro wrist cuffs don’t do the best job of blocking wind, as they can’t be tightened as well as they should, and the hem of the jacket itself isn’t cinchable either. All of this makes you slightly vulnerable to exceptionally breezy conditions.

Overall, North Face hasn’t skimped on quality in terms of fabric – DryVent is a great protector against wind and water, and it’s super durable too – but, unfortunately, some simple oversights in terms of basic design features means this jacket can’t stand up to violent winds as well as we’d like. 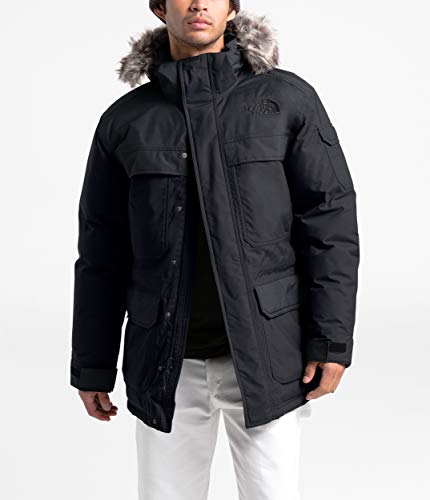 Okay, so now we know that the McMurdo can you keep dry, but does this come at the cost of poor ventilation? In short, no.

Not only is the McMurdo super water-resistant, but it’s also surprisingly breathable – which makes a refreshing change in a super-warm parka – thanks again to our old favorite, the VentDry fabric. Both layers of the fabric contain tiny pores so that water vapor can escape, stopping things from getting too sweaty underneath all that insulation.

On top of that, for all its flaws, we do like that the hood is removable. Taking it off and feeling the wind in your hair is a great way to cool down quickly if you find yourself overheating. Similarly, although the cuffs and hem might occasionally let too much air inside the jacket, they do a good job of keeping the air flowing so you don’t get too hot in there.

We have to say, we’re pleasantly surprised with the great ventilation this super warm parka has to offer. 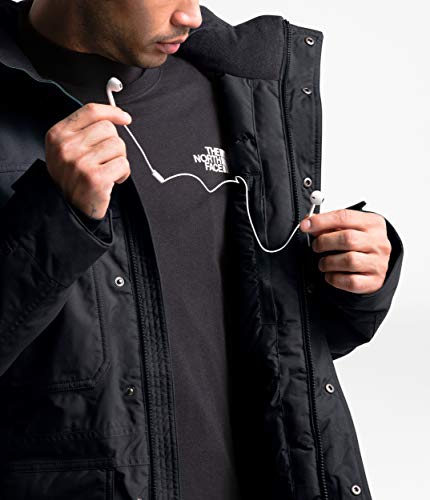 So, we mentioned how great down insulation is for keeping you warm earlier but, what we didn’t tell you, is that it offers a superb warmth-to-weight ratio. Bird plumage is, literally, as light as a feather. Plus, the 3D structures operate by trapping warm air, yet this air can be squished out of the pocket when you need to bundle up your jacket for transport or storage – winning.

Obviously, when you opt for a parka you aren’t expecting something that packs up so small you can pop it in your pocket but, as far as super warm parkas go, this jacket is pretty portable.

Externally, the McMurdo features two fleece-lined chest-height handwarmer pockets, plus a lower set at the usual height with two Velcro flap pockets on the outside – more than enough to stow away your essentials. On the inner, there’s a large, deep pocket on one side and a small media pocket on the other.

One thing to note is that there are drawstrings hidden inside some of the pockets, and they can be a little fiddly to use until you get the hang of them. Although we wouldn’t mind another one or two internal pockets, with eight pockets in total, we can’t really complain.

Obviously, parkas aren’t the cheapest bit of kit, but does the North Face McMurdo Parka III offer the right amount of bang for your buck?

The McMurdo is fairly mid-range in terms of cost, yet it’s warm, breathable, and durable – plus it comes with a lifetime warranty too so it won’t need replacing anytime soon.

The major gripe is the gap around the hood and, at this price, we’d expect a little more thought to have gone into it.

However, we guess you can’t have everything and, if you won’t be venturing into extremely windy conditions (and are happy to wear a scarf from time to time) then this jacket has a lot to offer at a reasonable price.

With an overall rating of 86, the McMurdo Parka III has done pretty well against our rating system – and if North Face could fix that issue with the hood, it would be a real winner!

So, would we recommend the McMurdo Parka III overall? That depends.

Sadly, this jacket is not quite as well-suited to life at the Antarctic research station, McMurdo, as its name suggests. This is predominantly due to heat loss linked to the design of the hood. So, if you’re planning on some extreme-weather missions, then perhaps you need to look for something a bit more technical.

…But the good news is, most of us aren’t planning on moving to the Antarctic, and it will do a great job of protecting you from the elements on all but the most extreme outdoor ventures. Plus, its stylish appearance makes it well-suited to cold seasons in the city so you’ll get plenty of wear out of it.