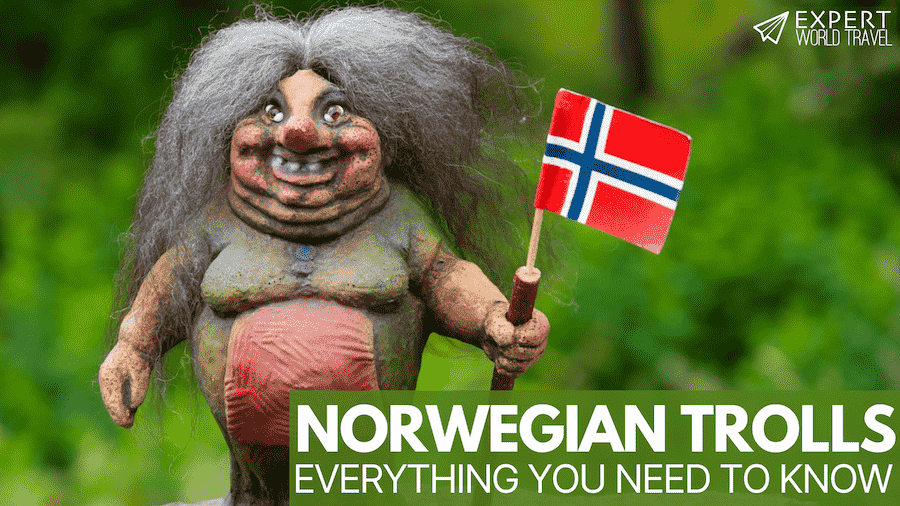 Norwegian Trolls: Everything You Need To Know

If you know anything about Norway then you know that there are a lot of things related to trolls in that country. Trollstunga, Trollsfjord, the Troll Park in Senja – what exactly is going on there?

Well, trolls are monsters from Norse mythology, so it makes sense that they’re ever so present in Norway. What do they look like, where do they live, do they eat humans, and do they really exist are just some of the many questions I’ll answer about trolls! Read on to learn everything worth knowing about Norwegian trolls!

Table Of Contents Show All
What Are Trolls?
Norse Troll Names
Are Trolls Real?
What Do Trolls Look Like?
Are Trolls Smart?
Where Do They Live?
Are Trolls Magical?
What Do They Eat?
Are They Dangerous?
Famous Trolls In Mythology
Trolls In Pop Culture

Trolls are creatures from Norse mythology. They are mentioned in a variety of Old Norse texts, and they’re usually described as beings that live in isolated rocks, caves, or mountains. Trolls are believed to either live alone or in small families, and they do not get along with humans.

However, at the time the text was written, the word “troll” was not necessarily used in the same sense we use it today. The source Old Norse text uses other words to describe the mysterious creature, and there is still some debate over their meaning to this day. The word jötunn is also used in the source text, which was used to describe giants who are thought to be even more dangerous than trolls.

This resulted in a debate whether there are distinct groups of mythical creatures or if all the terms are just referring to the same monster. There’s still some debate among experts even today!

Before the word troll was even coined, the Norse used other words to describe the creatures that we have come to know as trolls. Jötunn, troll, þurs, and risi are all similar in meaning, and there are still debates on what exactly the terms mean and who they are referring to.

It’s thought that jötnar were giants who once inhabited Scandinavia, and trolls were among them. Þurs were thought to be evil creatures, sometimes even demonic in nature, while risi were supposedly heroic creatures. That’s the interpretation of Lotte Motz, a renowned Austrian-American scholar who published numerous texts in the fields of folklore and Germanic mythology.

Not everyone agrees with him and Ármann Jakobson (an Icelandic scholar) is highly critical of that interpretation. He believes that the terms are used to denote a wide variety of beings from cave-dwellers to demi-gods.

We’ll never know for sure because Old Norse tales were never actually written down. But what we do know is that there are many different terms used to denote mythical creatures, some of whom were trolls.

Trolls are real in the same way Bigfoot and the Loch Ness Monster are real. They’re mythical creatures that are thought to have been around for centuries, but there’s no physical evidence to prove that they ever actually existed.

It’s up to you to decide whether they exist or not. If you’re looking for an answer backed by research and data then it’s a no – trolls don’t exist and there’s no evidence that they ever existed. 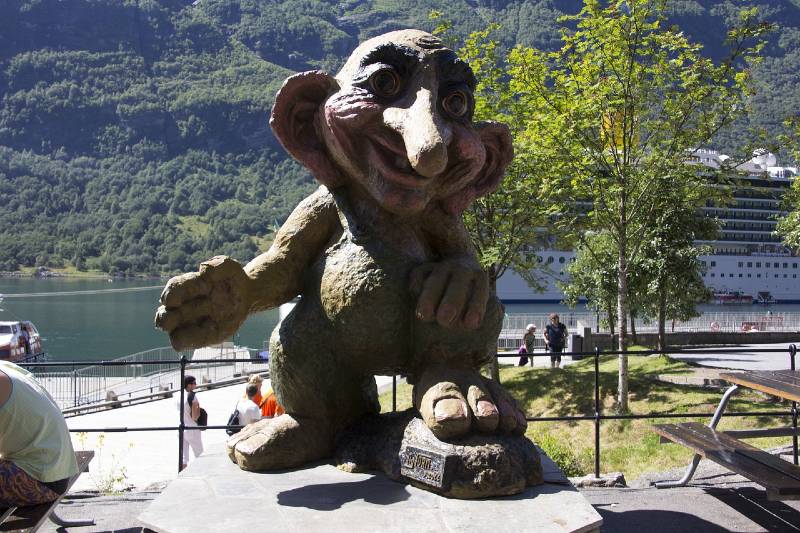 According to Scandinavian mythology, there are two types of trolls. One type resembles giant, and the most similar thing I can think of is the troll from Harry Potter that Harry, Ron, and Hermione have to fight off during their first year at Hogwarts.

Trolls are not attractive creatures. They are described as ugly, usually with big teeth, huge noses, and other grotesque features. Trolls are also much larger than the average human being, and sometimes they have multiple heads on one body.

There are also tiny trolls, which sound cute but aren’t. But they’re the inspiration behind the popular Trolls movies. Tiny trolls are short and stubby, and they usually live in caves or in other underground dwellings. They’re either hairless or have frizzy, unkempt hair, and they can have tails.

Those are the most common types of trolls, but they’re not the only ones. There are also humanoid trolls – Huldrefolk. They are magical forest creatures who look a lot like humans except for a tail. They’re thought to be very beautiful and seductive, especially Huldras (the females). Huldras could supposedly enchant men with their song, and then make them do whatever they wanted. Sometimes they would just keep them around as pets.

No, trolls aren’t very smart and that’s good news for humans because it means that it will be easy to escape if you ever get kidnapped by a troll. They’re incredibly dumb creatures and it’s really easy to fool them. And that goes for all types of trolls out there, from cave trolls of Norse mythology to the internet trolls of our day and age.

Although they lack human intelligence, some trolls are described as cunning creatures. They might not be very smart, but they possess magical powers and have a strong connection with nature that allows them to manipulate the elements for their own benefit. In other words, a troll doesn’t have to be smart to pick up a rock bigger than you and beat you to a pulp.

Where Do They Live? 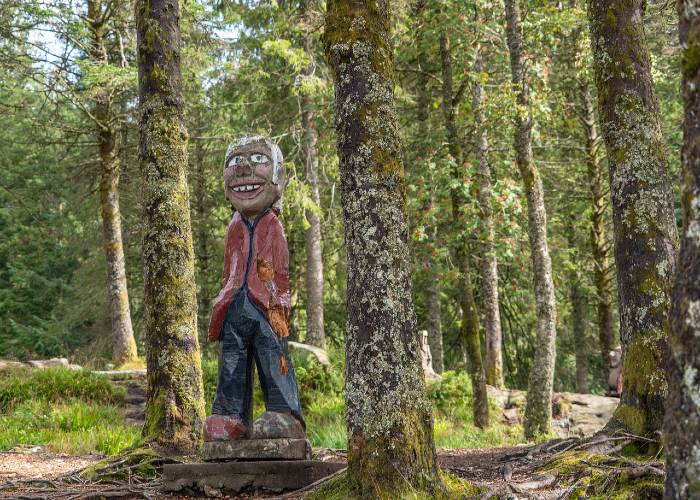 Trolls are thought to live in caves, forests, or underground dwellings. In general, they live far away from areas settled by humans, usually in places where regular people can’t find them. Different types of trolls live in different places, so a cave troll and a forest troll are two very different creatures.

It’s also worth noting that trolls are thought to turn into stone when exposed to sunlight, which explains why they predominantly live in cold and dark places.

Cave trolls are usually depicted as smaller than humans, with stubby arms and legs, and round bellies. They’re most similar to the trolls depicted in Frozen, and because of their small size, they’re not thought to be a big threat to humans. It’s the trolls of mountains and forests that you should be scared of.

They are the big, messy, ugly, child-eating creature of the scary Norwegian tales. They’re often depicted with a club in their fat hand or an entire tree since it’s believed that these creatures could easily just uproot an entire tree and use it like a baseball bat. It’s also thought that forest and mountain trolls are capable of creating hurricanes and causing avalanches because of their unique connection with nature.

It depends. Early Old Norse text described trolls as magical creatures with a unique connection to nature. This allowed them to manipulate the elements to deceive humans and destroy settlements. But even in those texts, not all trolls were capable of doing magic.

However, in later texts, trolls become more similar to humans and Neanderthals in particular. There has been some discussion in recent years that the trolls depicted in all those Old Norse stories could have been just Neanderthals. When you think about it, it makes sense – they both lived in caves, lacked human intelligence, and were big and ugly creatures. There’s no evidence to back up that claim, but it’s food for thought for sure.

What Do They Eat?

The good news is that trolls (usually) don’t eat humans – not adults at least. So if you were ever to encounter one in the wild while exploring the rugged Norwegian landscapes, at least you don’t worry about becoming their dinner.

Trolls have extremely sharp teeth that can cut through anything – bone, rock, wood, etc. They’re thought to eat whatever they can get their hands on, including goats and children. Naughty kids are their favorite snack, which happens to be a great threat for many Norwegian parents? Oh, you don’t want to eat your peas? Fine, I guess I’ll feed you to the trolls then! 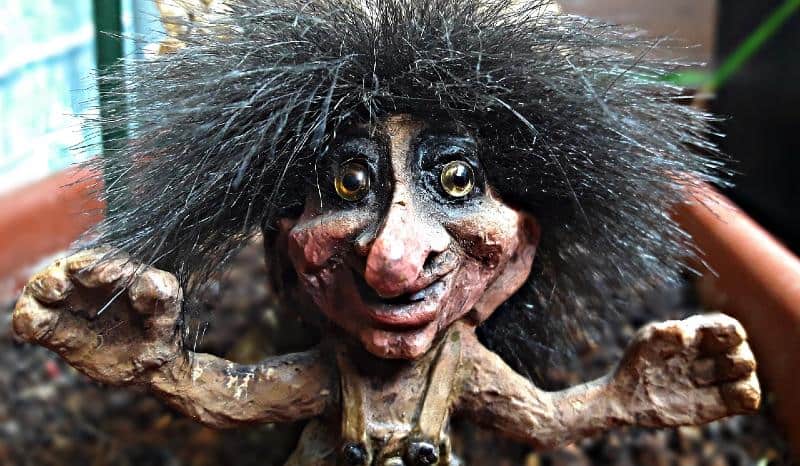 Because trolls often kidnap maidens, eat children, and ravage villages, it’s safe to say they’re supposed to be very dangerous creatures. At least the trolls of Norse Mythology are; some of the more recent depictions of trolls in pop culture would lead you to believe that they’re so adorable they must be your next pet.

According to various writings in Norse mythology, trolls are capable of destroying villages, killing humans, burning down churches, and doing many other horrible deeds. They are evil creatures who often use their magic and connection with nature to do ill, and humans should stay far away from them.

Old text usually describes them as not friendly or helpful to humans, and they warn people to stay as far away from them as possible. Forest and mountain trolls are thought to be more dangerous than cave trolls, mostly because of their size and shape. They’re even more dangerous if they’re capable of doing magic.

Funnily enough, there aren’t that many famous trolls in mythology. Legend has it that a Christian can kill a troll if they say its name aloud, so as you can imagine troll names are some of the best-kept secrets in the world. They might be dumb creatures, but nobody is that dumb.

Despite that, the names of some trolls from literature and Norse Mythology are known, so let’s go over those quickly.

Dunker – a troll mentioned in an old folktale from Fosen

Ymer – a jötunn and the largest creature from Norse Mythology

Trym – king of the jötnar, reigned in Jötunheimr 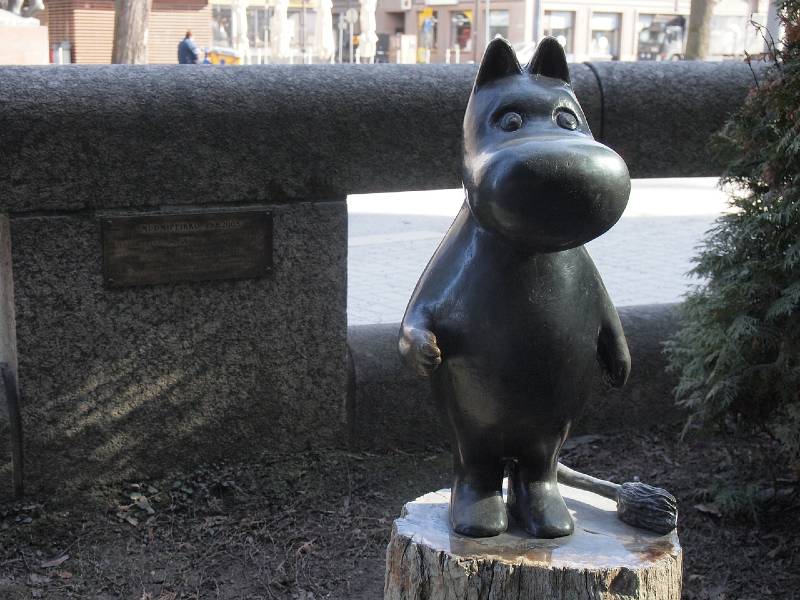 Trolls are very present in pop culture, but they’re usually different from the trolls of Norse mythology. They’re often featured in cartoons, and they’re mostly depicted as cute and non-threatening creatures. The recent Trolls movies have made them incredibly popular among children, so I guess it’s a good thing that the trolls in movies aren’t exactly hungry for kids.

Even the trolls in Frozen are happy, cute, and happy to help the humans, which is as far from their descriptions in Norse mythology as it can get. But hey, those movies were written for children so the depiction of trolls as non-threatening and cute creatures makes sense.

Trolls are also featured in sci-fi movies and TV shows like Hobbit, Harry Potter, Buffy the Vampire Slayer, and many others. The depiction of trolls in these movies is more similar to what we see in Norse mythology – they’re ugly and scary monsters that pose a danger to humans and other creatures.

Other (shocking) examples of trolls in pop culture include the popular cartoon Moomins (Moomintroll) and Hugo. The Swedish cartoon and the Danish TV game were extremely popular with children all over the world at the turn of the millennia, and I’m sure many millennials will need either a strong drink or a cold shower after this. I know I do and I grew up watching Moomins and trying to play Hugo on TV! Who knew they were scary trolls all this time?

I have to give an honorary shoutout to Assassin’s Creed Valhalla as well. The recent installment in the video game franchise is centered around Vikings and Norse mythology, including trolls. You can even go to Asgard and Jotunheim and see the jötnar. It’s a really fun game and definitely give it a go if all this troll talk suddenly has you interested in Norse mythology!