You probably landed on this review because you are thinking about grabbing an Osprey Daylite. But, your big question is, which one? The Daylite or Daylite Plus.

Although The Daylite and Daylite Plus share a lot of the same great features, there are some big differences worth knowing about before you buy.

If you want the short version I have a quick comparison table below (bold where there is a difference).

For more detailed info, keep on scrollin' and you will get to the good stuff!

Keep reading for more details on each of these...

The main differences between the Daylite and Daylite Plus are

So, there are some differences, but what do they mean in reality. Let me show you.

Sure, there are some feature differences between these two packs, but the biggest one is volume. This could be the main decider for you in the end. There is 7L difference which is quite a lot and could mean the difference between taking some extra food, a jacket or camera (or not).

Of course, if you are after the lightest/smallest because you know you are going "ultralight" for your day hike or run/ride, then the Daylite is way better. It will save you 3.8 oz. 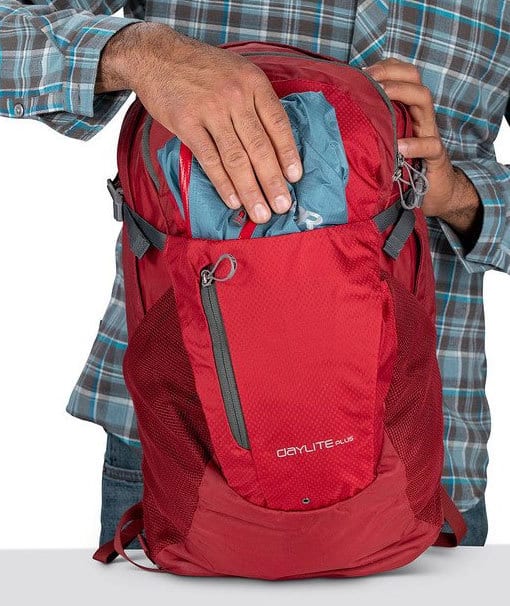 There are two extra pockets on the Daylite plus.

A front stretch stash pocket. This is a great spot for stuffing in a light jacket or other clothes you want quick access to. And when the rain comes down suddenly you will thank Osprey for this pocket. Seriously.

On the stash pocket (see the image above) you will see a vertical zipper. This gives you access to a small pocket right on the front. Not a place to store anything big, but great for easy access to small items. Again, nice for things like keys or your phone or wallet. Really saves you having to dig into your pack to find them. (Where did I put my damn keys!) 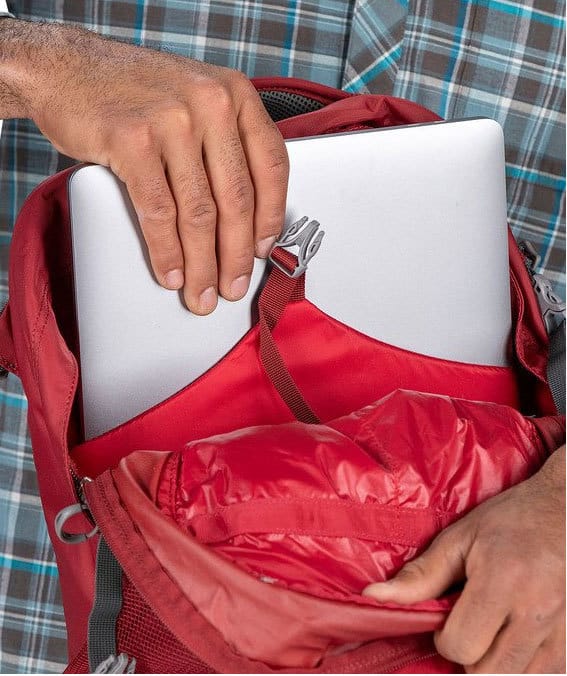 The Daylite has a simple elastic internal pocket, but the Daylite Plus takes it a step further and makes it padded and secured (with a clip - gotta love the clip :>).

Either pocket is perfect for a 15" laptop, and could also be used as an alternative spot for your hydration reservoir storage. However, for me the added security of the padding on the Daylite Plus is a big bonus. Especially when your laptop is worth over $1000.

Shared Features Of The Daylite & Daylite Plus

Most of the features on these two packs are quite similar, so let's take a quick look at what they have in common...

Osprey have added a comfy set of straps on both these packs.

You get fully adjustable shoulder, hip and sternum straps.

The straps and back area are also covered in sweat wicking material to help keep you dry. 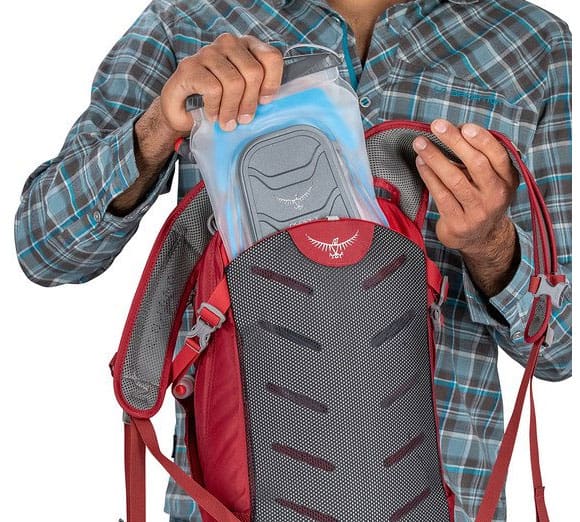 For those of you who love using hydration reservoirs while doing sport, the Daylites come with a dedicated pocket inside the back of the pack.

Alternatively you can throw yours inside the pack too.

Lots Of Space Inside

Both packs have lots of space to stuff your gear inside the main compartment. They do differ in volume with the Daylite being 13L and the Plus 20L. At the front/top there is a 1/3 length pocket with a couple of handy mesh organizer pockets too. A perfect spot for your smaller items.

The Daylite packs can also easily be attached to many of the other Osprey packs. So they also make a handy extension of addition to your other existing packs (with Addon compatibility).

Which Is Best For You? The Daylite or Daylite Plus

I like, the Osprey Daylite as a super lightweight and small pack that is good for those short, quick trips or training runs. It has enough space for even a day hike (rain jacket, food, water etc) but you might struggle on a long day trip in a city or if you carry a lot of gear no matter where you go (that is me in a nutshell!)

The Daylite Plus gives you far more space and packing options with the front stash pocket as well as better storage for your laptop or tablet. I would use this one as more of a travel or small daypack for class or if you just want the option to carry more stuff.

Pricewise, there is also a fairly big difference (at full price anyway) with teh Daylite coming in about mid 30 bucks and the daylite plus mid 60s. So this may also help you decide, because that is almost double the price. However, places like Amazon (links below) can often have discounts (at the time of writing there was one for the Plus).

Daylite vs Daylite Plus

Osprey Vs Other Brands