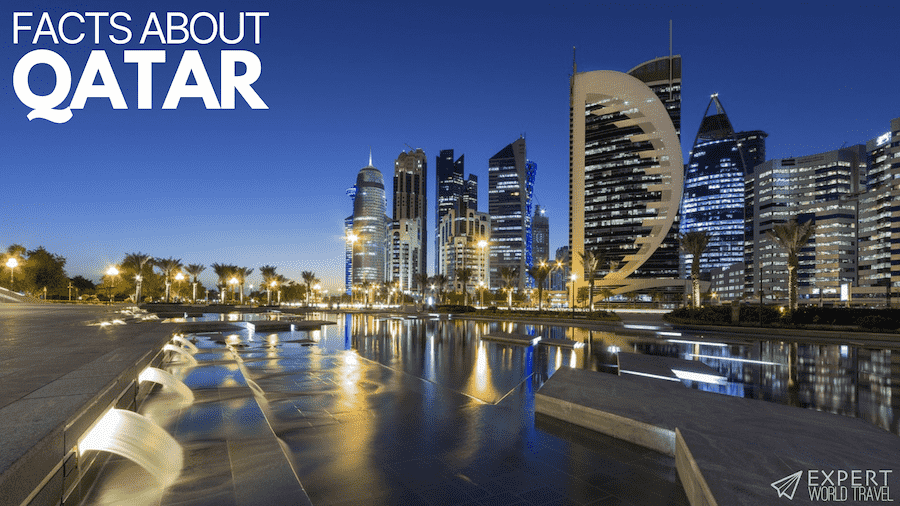 Qatar Facts – Some Of The Craziest You Will Read

The east meets the west and traditional culture merges with the contemporary on the Arabian peninsula of Qatar. It’s an easy country to travel to, and Qatar Airways links the capital city of Doha to over 160 international destinations. Visitors from 87 countries can stay 30-90 days in Qatar without a visa.

The country has much to offer travelers from desert dunes to Persian Gulf beaches and the futuristic skyline of Doha. The Islamic country is Western-friendly and women only have to cover the knees and shoulders when not on the beaches. These 15 fascinating facts will convince you to travel to Qatar soon.

A trip to Qatar is the perfect choice for solo travelers. The country has earned the accolade of the safest country in the world three times between 2017 and 2020. According to the Numbeo crime index, Qatar earned 11.90 points out of 100 for the country with the lowest crime rate. Travelers can safely enjoy the beaches, museums, and art galleries.

2. One of The World’s Richest Countries 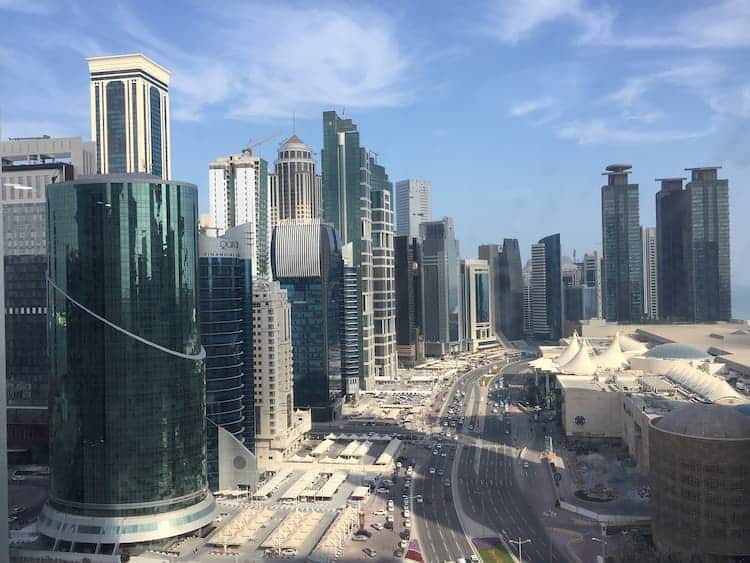 In 2020, the International Monetary Fund estimated the GDP (gross national product) per capita at $138,910 beating out Luxembourg’s $112,045 at second place. The exportation of petroleum and natural gas accounts for more than 60 percent of the GDP. Qataris enjoy many perks because of the country’s wealth. One is the ability to fill their tanks with petrol for less than Americans and Europeans spend on a few frappuccinos at Starbucks.

3. Qatar Did Not Always Have Oil

Qataris dived for pearls for an income before they discovered oil under the desert.

Diving for pearls was the country’s mainstay for thousands of years. That changed when Japan began exporting cultured pearls during the 1920s. Like many Gulf region countries, Qatar turned to crude oil exportation beginning in 1949. More oil fields were discovered in 1960 and again in 1970. To honor the past, an artificial island in the shape of a string of pearls was built on top of a former famous pearl diving.

4. Qatar Has A Fantastic Airline 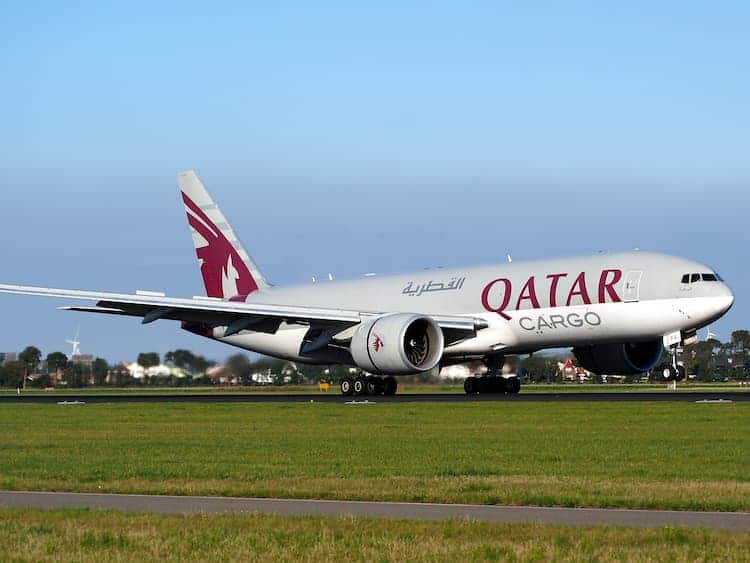 Qatar Airways is the best in the world.

One of the few airlines that take passengers to all seven continents, Qatar Airways was named the world’s best airline in 2019. At one time, it boasted the world’s longest flight traveling between Doha and Auckland for 16 hours and 30 minutes. The flights are comfortable and luxurious.  In 2021, the airline played a key role in helping Afghans and US citizens leave Afganastan to end the world’s longest war.

5. Qatar Has An Amazing Airport 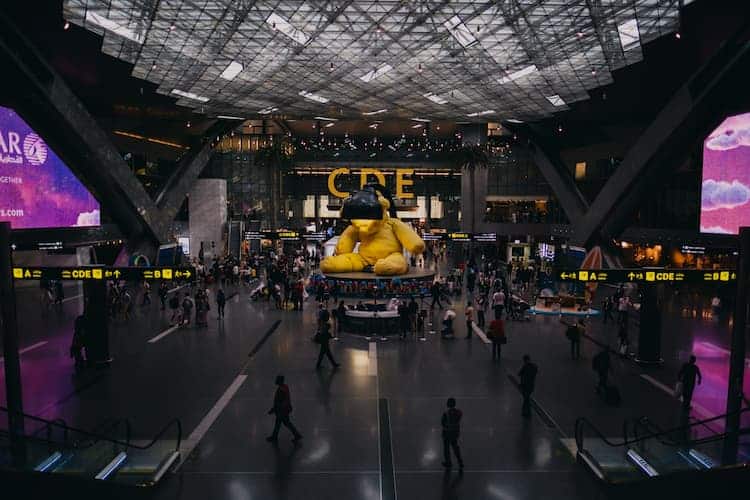 Qatar has the third-best airport in the world.

The Hamad International Airport in Doha was named the third best airport in the world. The runway is the longest in Western Asia and the sixth-longest in the world. With loads of entertainment and a giant teddy bear in the main terminal, it gives travelers a great first impression of Qatar.

Ex-pats love moving to Qatar for the warm winter weather, lifestyle, and tax-free salaries. The ex-pat population is now so immense that only about 12 percent of the population are Qataris. They are now the minority but they aren’t complaining. The result is a melting pot of cultures and traditions that enrich the country.

7. Everyone Lives in Doha

Doha is home to a whopping 99 percent of Qatar’s population.

Along with being in the minority of the population, the majority of Qataris reside in the capital city of Doha. That’s because the rest of the land is desert and doesn’t sustain life very well. And thanks to the country’s wealth, most of them can afford to live in the city. 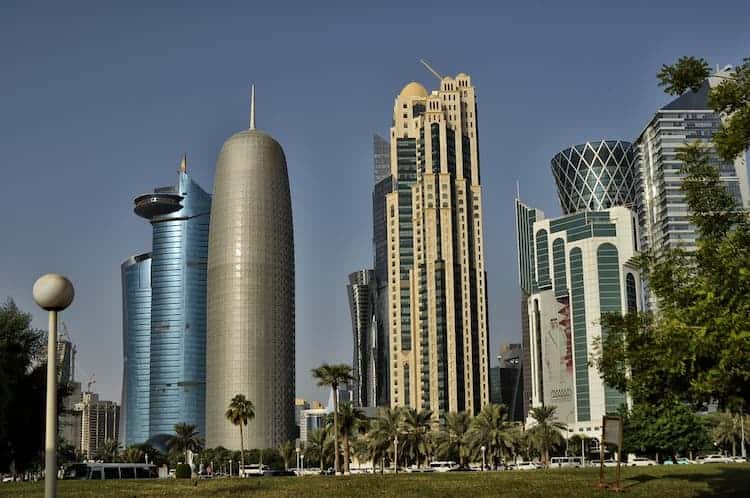 Qatar is the second flattest country on the planet.

There are no mountains to hike or cliffs to climb in Qatar, but the flat expanses are amazing and cycling is popular. The country is second only to the Maldives for flatness. The highest elevation is around 338 feet above sea level, and the average is 91.1 feet. But there are plenty of skyscrapers to get a bird’s eye view of the surroundings. 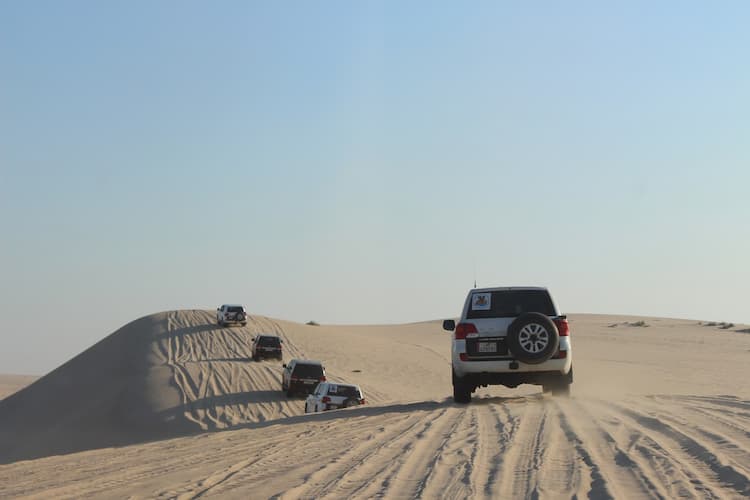 The Qatar landscape has almost no forests and little greenery.

You also won’t find any forests and green pastures in Qatar, but you will find plenty of stunning sandy landscapes. The greenery you will see is mostly human-made. The country is one of four territories around the world with scant forests. Pretty much all of the landscape of Qatar and the United Arab Emirates is desert.

Qatar has one of the few places on Earth where the desert meets the sea.

Khor Al Adaid (also spelled Khawr al Uday) is an inlet of the Persian Gulf in southeast Qatar and is one of the only places where the desert meets the sea. The area was declared a nature reserve in 2007 and Qatar is working to get it named as a UNESCO World Heritage Site.

11. Weekends Are A Little Different

Most of the Western World clocks out on Friday afternoons and doesn’t return to work until a manic Monday morning. In Qatar, as in most countries in the UAE, the weekend includes Friday and Saturday and the workweek begins on Sunday. That’s because Friday is a blessed day in Islam. TGIT?

The capital city of Doha in Qatar has the world’s longest cycling path.

The flat land of Qatar is the perfect place for a cycling path, and Doha holds the Guinness World Record for having the longest continuous bike path. The Olympic Cycling Track is 33 km long. It was completed in 2020. Created by the Ashghal Public Works Authority, it features 100 benches and 20 rest areas.

You’ll find this amazing buffet line at the luxurious Marriott Hotel in Doha. You can get a taste of every international cuisine imaginable here from a full English breakfast to tacos or sushi.

14. The national dish of Qatar is Machboos.

Don’t leave Qatar without sampling their delicious national dish. Machboos are made with meat, rice, tomatoes, and onions and flavored with a mix of heavenly spices. Other traditional dishes to try include harees and ghuzi. Harees is made with boiled, cracked, or coarsely ground wheat, meat, and spices. Ghuzi is made with lamb and spiced rice or pasta. 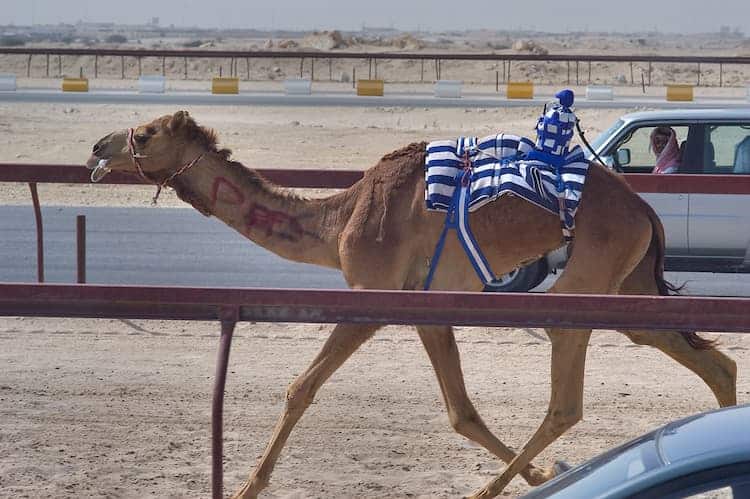 Qataris use robots for jockeys in camel racing.

Camel racing is a popular sport in Qatar. Up until 2004, children were used for jockeys. They were replaced by robots after the world’s safest city deemed this practice too dangerous. The robots are controlled remotely by camel herders driving alongside the track.