Things To Do In Assisi, Italy

Visiting Assisi in Umbria? Then you’re certainly in the right place because this detailed guide includes all the top sights the charming Italian town is best known for!

Whether you’re into Roman ruins, imposing Basilicas, or mountainous parks that offer gorgeous panoramic views, Assisi does not disappoint. Read on to see what the top things to do in Assisi are, and start planning your trip to this beautiful town in Italy! 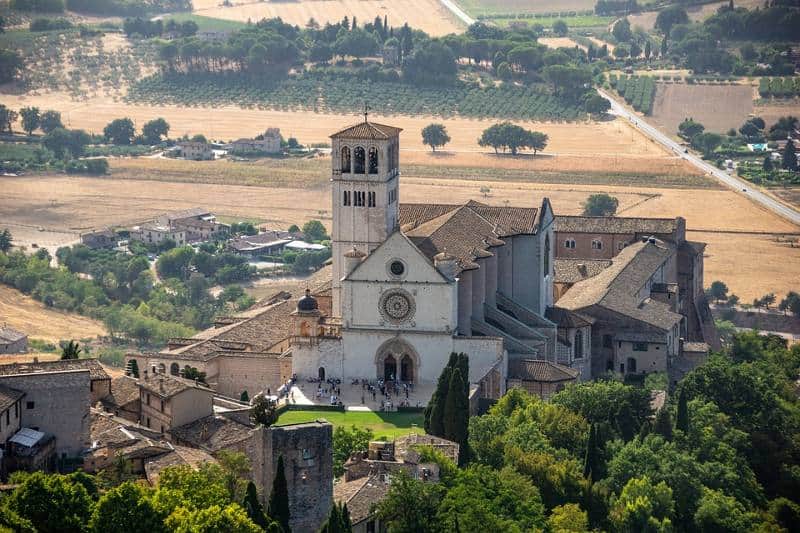 Basilica di San Francesco is the town’s most famous landmark. This imposing two-level church dates back to the 13th century, and it’s well known for incredibly detailed frescos that portray the life of one of Italy’s patron saints, Saint Francis. It is built into a hillside and it consists of two churches – the Upper Church and the Lower Church.

Both churches are adorned with countless frescos that were created by some of the best medieval painters Italy has ever produced. The quality of the works of art inside the church truly demonstrates how Italian art developed in this period, while the interior of the Upper Church remains one of the best examples of Gothic architectural style in Italy.

The basilica is also the final resting place of the patron saint and his stone sarcophagus sits in the crypt below the church. It’s undoubtedly the most important church in Assisi, which says a lot considering just how many churches there are in this charming little town.

The imposing basilica is also an important pilgrimage site for Christians in Italy, and it’s been a UNESCO World Heritage Site since the year 2000. 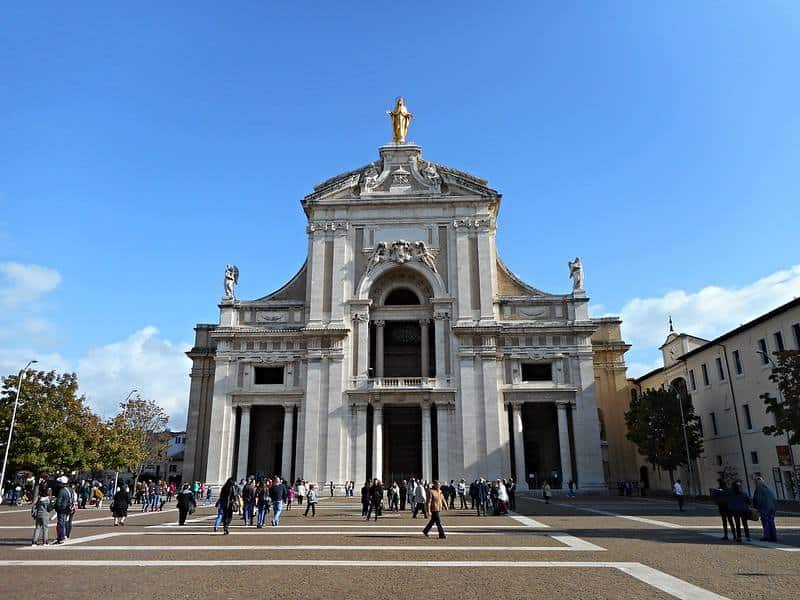 Basilica Santa Maria degli Angeli is a minor Papal basilica situated a bit outside the town of Assisi and it’s the most famous attraction that’s situated outside the Assisi city walls. It lies at foot of the hill Assisi, and it’s a UNESCO World Heritage Site worth visiting if you’re in the area.

The minor Papal basilica is known for the Mannerist and Baroque architectural styles, and it’s equally fascinating on the inside as it is on the outside. Do go inside the church to see the many works of art that adorn the walls of the chapels. The paintings in the side chapels were created by some of Italy’s greatest artists and they’re one of the highlights of the basilica.

Basilica di Santa Chiara is another famous basilica in the town of Assisi. It’s famous because it holds the remains of Saint Clare of Assisi, who was one of the first followers of Francis of Assisi. She is also known for founding the Order of the Poor Ladies, which is nowadays known as the Order of Saint Clare.

In addition to housing the tomb of St. Clare, this 13th-century church is also famous for its pink and white facade. Its interior is even more impressive than the exterior, so definitely check out the inside of the church if you get the opportunity.

Piazza Santa Chiara is the large square in front of this famous basilica, and it’s home to a rather interesting fountain. It’s a mushroom-shaped fountain, and it’s certainly worth checking out if you like seeing peculiar landmarks. 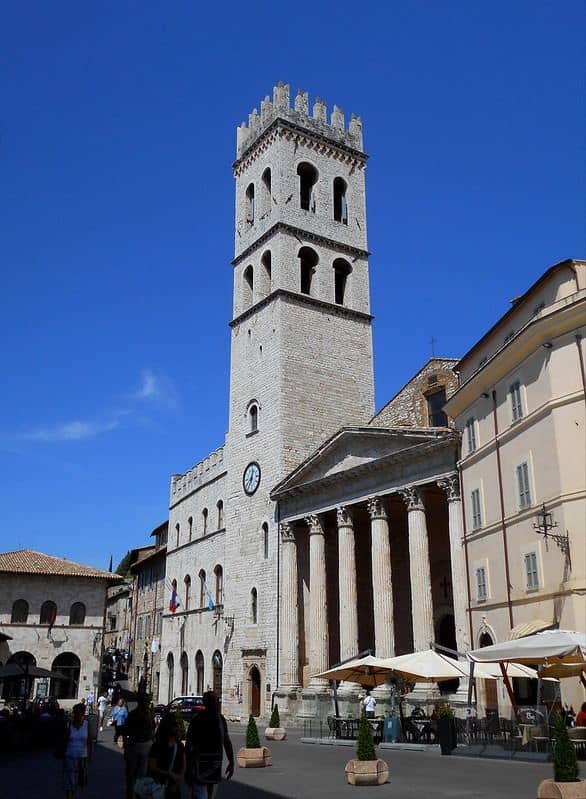 Piazza del Commune is in the heart of historic Assisi. It’s a popular gathering place, but also the best testament to the incredibly rich history of this charming town. It boasts a fountain, many cafes and restaurants, and the incredible Temple of Minerva.

The large public square is best experienced in the spring and summer. All the cafes and restaurants put up their outdoor tables, and tourists can take in the views of Assisi’s oldest buildings while basking in the sun. It’s nowhere near as attractive in the winter – there aren’t any tables or chairs outside, and the vast square looks very bare and uninviting.

Another building that you can’t miss on the square is the 13th-century Torre del Popolo. That’s the tower right next to the Temple of Minerva, and it’s actually the tallest building in Assisi at 47 meters. It’s the city’s bell tower with a clock on the facade, but it’s worth noting that the clock wasn’t added until the 15th century.

The Roman Forum and Àrchaeological Museum is another popular tourist attraction in this charming town. The Forum is spectacular to observe and visiting the museum inside it is one of the highlights of trips to Assisi. At least for lovers of history and archeology.

You’ll notice an ancient Roman building that was constructed during the first century BCE and it’s absolutely impressive to observe how it has withstood the test of time. Also, it’s virtually impossible to miss it because it sticks out like a sore thumb amongst the younger buildings that surround it. Well, that’s actually the Temple of Minerva – the ruins of the Roman Forum are situated underneath the temple and the public square.

Inside the fascinating building, you’ll find a small church (Church of Santa Maria sopra Minerva in Assisi), ornate decorations, and stunning gold accents everywhere. You can also see paintings, statues, and quite a few archeological objects here, so plan to spend at least an hour exploring this fascinating landmark. 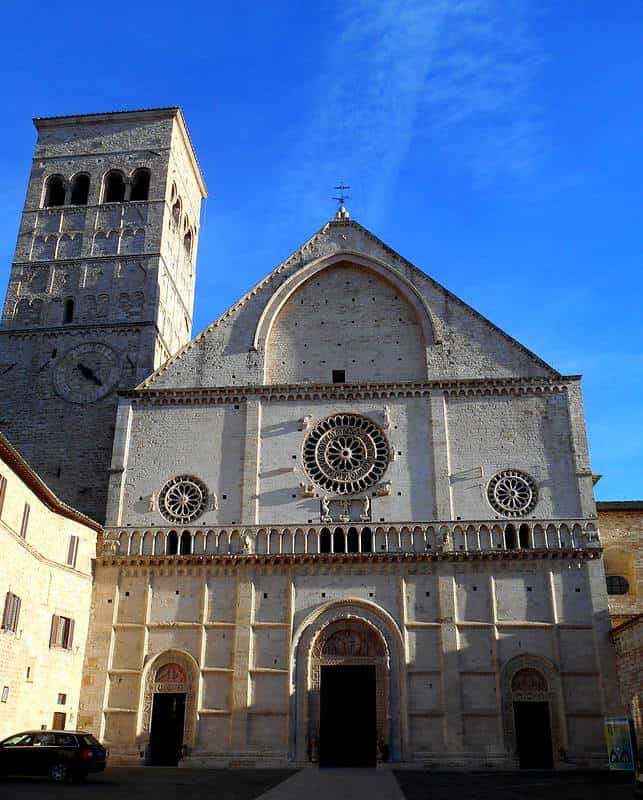 The Cathedral of San Rufino is a smaller 13th-century church situated in the eastern part of the town. It’s famous for its many statues and ornate friezes, but also because it houses the font where patron Saint Francis was baptized.

There’s also a Diocesan Museum in the cathedral, as well a crypt that houses the remains of San Rufino. It’s one of the most important religious buildings in the entire town. Piazza San Rufino is the small public square and parking in front of the cathedral – there’s nothing too special about it, apart from the Fontana di San Rufino.

That’s the fountain on the northern end of the public square, and it’s a rather interesting sight. It was originally constructed in the 16th century and it features a rectangular stone basin that is fed by water from six lion heads. It’s an interesting sight, but keep in mind that it’s not exactly the best-looking tourist attraction out of the bunch. 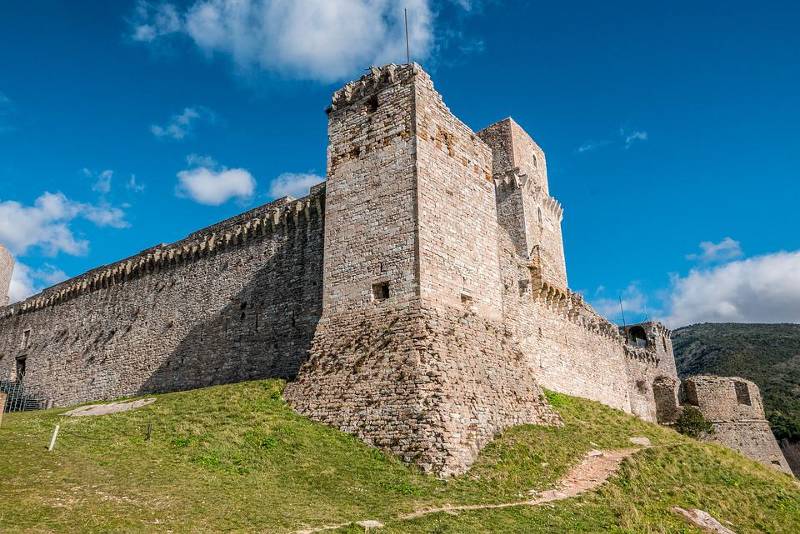 Rocca Maggiore is an imposing medieval fortress overlooking the town of Assisi. The complex was initially built in the early 14th century and it included two fortresses – the Major and the Minor.

The fortress is easily accessible on foot from the town, but there are a lot of stairs to climb on the way there. It’s all worth it though since the views from Rocca Maggiore are absolutely magnificent.

There’s an entrance fee if you want to go inside the fortress and it’s absolutely worth it, if only for the views. The rooms in the castle are all staged, so you will get an idea of what they were used for centuries ago.

Chiesa Nuova is a 17th century church in Assisi. It was constructed on the site of the supposed birthplace of St. Francis, and it’s called Chiesa Nuova (New Church) because it was the last church constructed in Assisi in that specific time period.

The Reinassance style church is recognizable for its high dome, caisson ceiling, and beautiful frescos. It’s not an extremely remarkable building on the outside, at least when compared to the much older churches in Assisi. However, it’s absolutely spectacular on the inside, so definitely go inside and see the ornate interior.

Pinacoteca Comunale is an art museum situated in the town center, just steps away from the St. Francis Basilica. The museum is inside a historic palace that served as the residence of noble families Giacobetti and Vallemani.

The museum’s collection dates back to the 19th century in an attempt to preserve the artistic heritage of Assisi. Visitors can observe a variety of gorgeous paintings that were created between the 13th and 16th centuries, most of which originate from the town’s many public buildings.

Terra Umbra Antica is a popular wine store in Assisi and a great place in town to get a taste of some of the best local wines from the region. In addition to its wide selection of premium local wines, the store also sells all the things that go well with the wines, such as fresh pasta, cheeses, and cured meats.

If you’re not an expert at combining cheeses and wines, there’s nothing to worry about. The store owners are knowledgeable and they will gladly recommend the best pairings for your personal preferences, so you don’t miss out on the local delicacies! 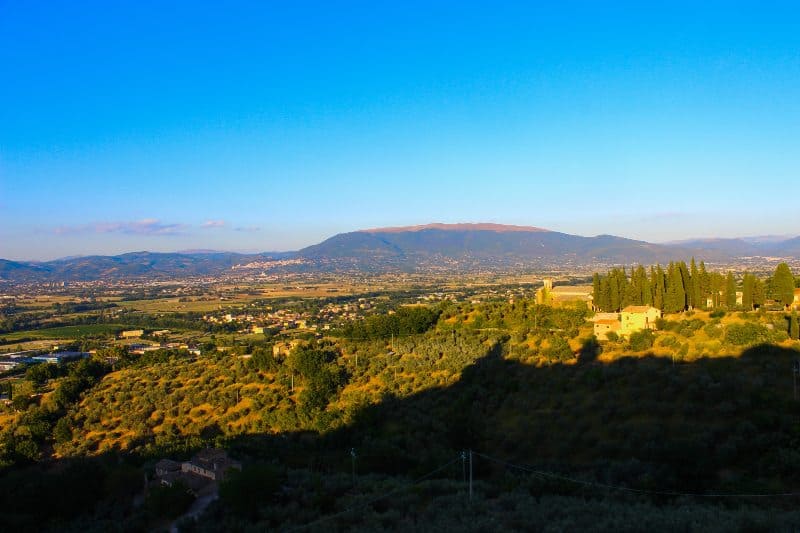 Mount Subasio is a regional park just above Assisi and the best place in Umbria for all hikers and outdoor lovers who visit this charming Italian town. With meadows, forests, and olive groves, it’s a great place to go when you want to spend some time in nature.

The vast park offers spectacular views of Assisi’s best-known landmarks, as well as many hiking trails that are suitable for beginners and avid hikers alike.

It’s worth noting that the regional park is huge and it would take days to explore everything it has to offer. If you’re only in Assisi for a short while, it’s best to plan a quick morning hike in the park, admire the fabulous views, and head back into town for further exploration.

Osteria Piazzetta dell’Erba is one of the highest-rated restaurants in Assisi and the perfect place in town to get acquainted with the local cuisine. It’s situated in the heart of the town, just down the road from Piazza del Comune.

The restaurant serves authentic Italian cuisine and it’s a great place if you want to taste the local delicacies. Try the best Italian wines, delicious pasta dishes, risottos, and definitely do not skip the dessert!

This is also a good place to try the more traditional Umbrian cuisine, which is known for olive oil, cured meats, and fresh pasta. One of the first dishes on their menu is a selection of Umbrian cured sausages and cheeses, and it’s a great appetizer that will get you acquainted with the prevalent flavors of the regional cuisine. 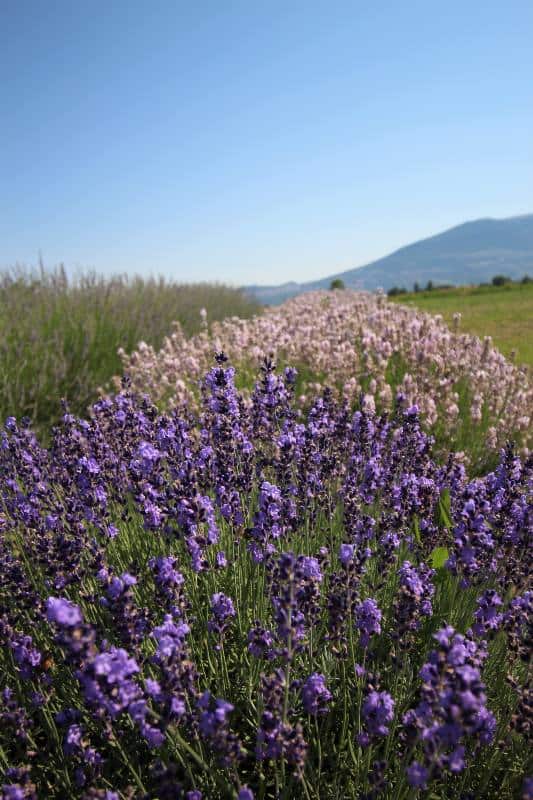 Lavandeto di Assisi is a plant nursery that’s been around since 2004. The place sells mostly lavender, but also a lot of other types of plants. It’s possible to visit if you have no intention of buying any plants and just want to revel in the scent of a lavender field.

The plant nursery also organizes festivals and other events, most of which are held in spring. If you’re traveling to Assisi in April or May, don’t miss out on this hidden gem since it is absolutely magnificent when everything is in bloom.

This is a great place to shop for souvenirs since you can buy pretty much lavender-anything here. They make oils, scent bags, and loads of other lavender-themed gifts. It’s also possible to purchase everything online and have it delivered, but the place is so special that it’s certainly worth visiting in person. 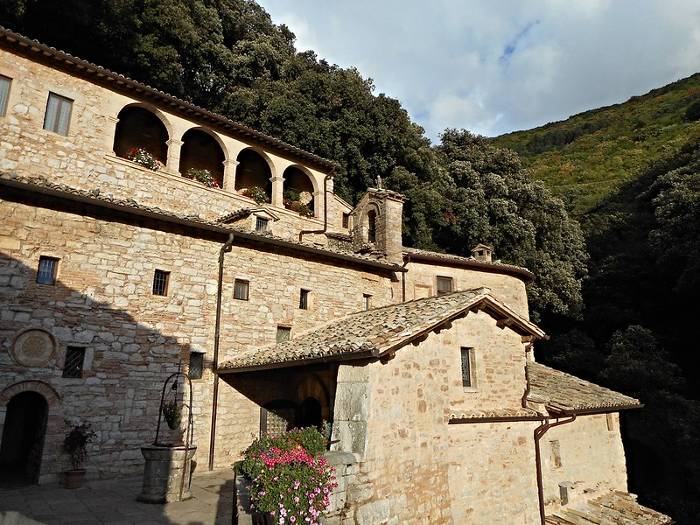 Eremo delle Carceri is a hillside hermitage that dates back to the 13th century. It’s situated northeast of the town of Assisi and it’s famous for being the place where Saint Frances came to pray. This place of worship is particularly popular among religious people, and it’s definitely a different experience for spiritual visitors.

But you don’t have to be religious or spiritual to realize the significance of the medieval complex. Multiple buildings surround the original cave and oratory, the oldest of which dates back to the 13th century.

The complex buildings include a small friary, Cappella della Madonna, the Grotto of St. Francis, and the Devil’s Hole. It’s worth noting that the friary buildings can only be visited if you are accompanied by one of the community friars.