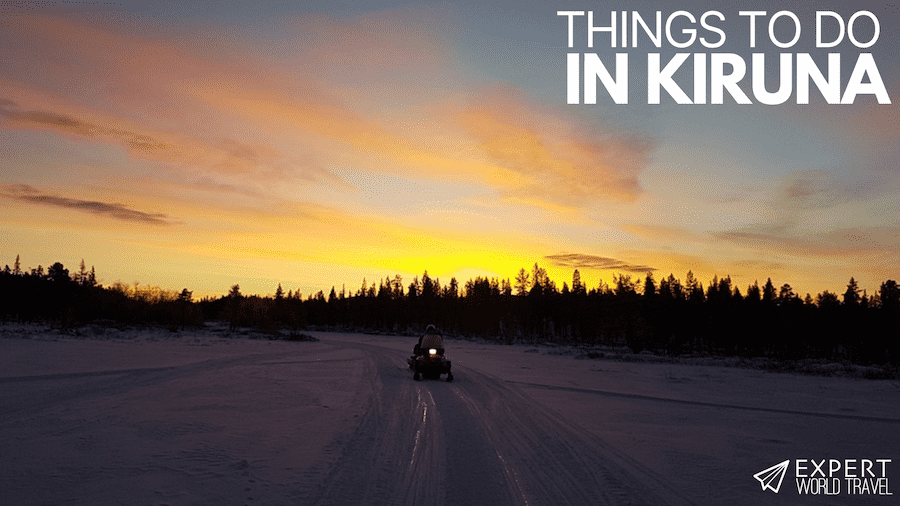 Things To Do In Kiruna, Sweden

Kiruna is Sweden’s northernmost city sitting above the Arctic Circle in Swedish Lapland. Kiruna is famous for quite a few things, namely the long winter night, the midnight summer sun, Saami culture, beautiful tundra landscapes, space exploration technology, and having the largest iron ore mines in the world.

A visit to Kiruna is not for the faint-hearted as you really are heading into the middle of nowhere and you should have a good reason to go, as it’s pretty far away from any kind of ‘normal’ city you might be used to. But, if seeing the northern lights or experiencing the Arctic tundra are things you have dreamed of, a visit to Kiruna should be high on your list.

Things To Do In Kiruna During The Winter 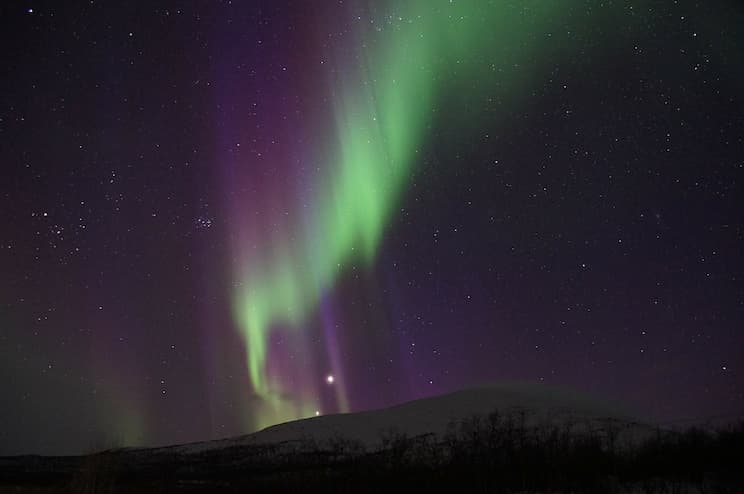 During winter, Kiruna and the surrounding area is one of the best places in the world to gaze upon the aurora borealis, aka the northern lights, thanks to its location inside the aurora zone above the Arctic Circle. The area has a lot of cloud-free nights during the wintertime which makes for prime opportunities for searching out and gazing upon the northern lights.

You can even go hiking and on snowmobile tours to try to search and find the aurora borealis in the night sky which adds a fun element of adventure when trying to find and see them.

Visit Or Stay At The Ice Hotel

One of the most iconic things to do in Kiruna during the winter is to visit the Ice Hotel. Every year, the Ice Hotel is rebuilt by artists and sculptors from around the world. They use large blocks of ice from the Torne river and snow to recreate and kind of fairy tale hotel that is full of stunning ice artwork and ice sculptures.

If you want to stay at the Ice Hotel for a few nights they have specially designed ice rooms and suites with everything you need to stay warm and enjoy your experience of sleeping in ice. But, it doesn’t come cheap and you should expect to pay around 800-1000 USD per room per night.

If staying at the Ice Hotel is way out of your budget, which it certainly is for most of us, you can also visit the art gallery inside the Ice Hotel during the day. For the price of a very affordable day ticket, you can wander around the IceHotel looking at the impressive artwork and enjoying being inside a hotel made of ice.

If you love snow and a snowy mountain scene then a trip to Kiruna is not going to disappoint. Kiruna has between 175-225 snow days per year, so if you visit in winter, a white shimmering landscape is pretty much guaranteed and the best way to enjoy it is to get out and explore it.

From Kiruna, you can see Sweden’s highest mountain Kebnekaise, there are ancient boreal forests to explore, frozen lakes, and the horizon is almost covered in peaks.

There are numerous hiking trails around Kiruna which anyone can do, you can also book fun activities like going cross country skiing, snowmobiling, reindeer sleigh rides, and dog sled rides too. There is also no need to worry about the cold as when you book any of these activities the right thermal clothing is provided to keep you warm and safe outside. 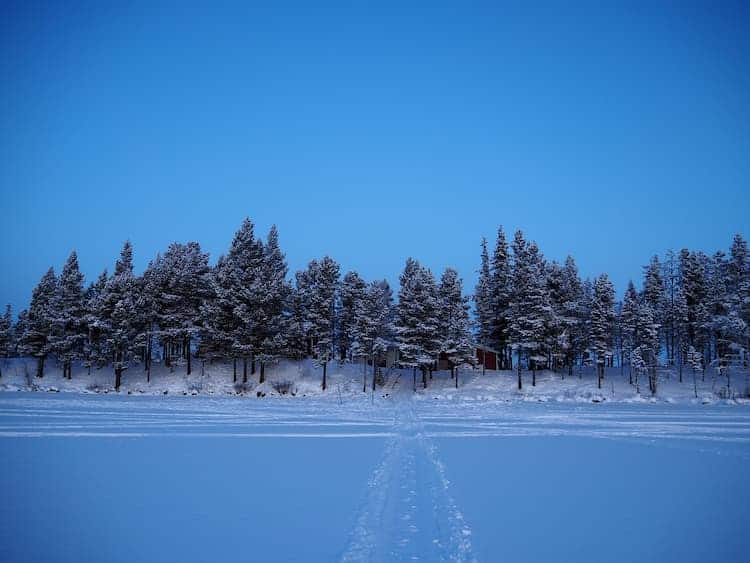 If you have ever wanted to mush your own sled with a pack of huskies then Kiruna is a great place to do it. After a few lessons, you are set free with your own pack of Siberian Huskies or Alaskan Malamutes to explore the surrounding area with. The dogs can get you moving to up to 20 kilometers an hour and there is nothing quite like being transported around on a dog sled while watching the northern lights dance above your head.

Take Relaxation To Another Level

Getting cozy in a cabin next to a fire, reading a good book, enjoying Swedish spas, breathing in some of the freshest air, eating hearty meals, and occasionally gazing at the northern lights. This is the kind of life that awaits you in Kiruna and if it sounds just like what you need to unwind from the stresses of daily life, book your trip now.

There is nothing more freeing than total darkness in a cold place. All that guilt of missing a sunny day simply doesn’t exist and you can take the opportunity for some real me time at your own pace and leave Kiruna feeling more refreshed than ever. 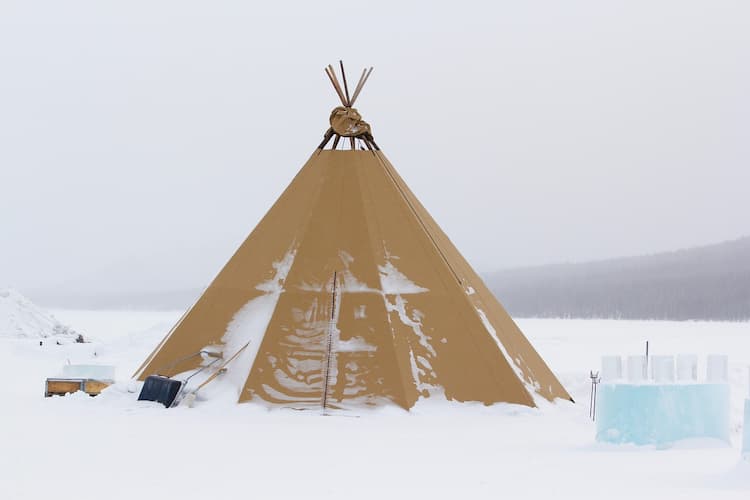 Get A Taste Of Sami Culture & Cuisine

The Sami people are the northernmost indigenous culture in the whole of Europe and have been living in the northern parts of the Kola Peninsula, Norway, Finland, and Sweden for thousands of years. Their traditions are very different from Scandinavians and they are absolute artists when it comes to living and surviving in the Arctic.

One of the best places to experience some Sami culture in Kiruna is at the outdoor Saami museum of Nutti Sami Siida. You can meet some local Sami people, interact with reindeers, and try some local Sami cuisine which includes delicious things like reindeer burgers and cloudberries.

If you wanted to take it a step further, you can go and stay at the Sami run Reindeer Lodge which will have you staying in cabins completely surrounded by nature and it’s in a great place to see the northern lights without having to go on a tour to find them.

One of the most popular things to do in Kiruna for locals is to go ice fishing on the local lake for arctic char. It’s so popular in fact that Swedes from all over the country drive up just to go ice fishing in the lake at Kiruna.

The journey starts off with a snowy hike in snowshoes down to the lake where you’ll then drill a hole deep into the ice. Once the hole is cut, it’s time to bait your hook and drop it into the hole and wait until you get a bite.

There is nothing quite as exciting as when an arctic char takes your bait and you’re fighting it surrounded by the beautiful snow-covered landscapes. Once you land the fish you also get to taste some delicious fresh arctic char.

Things To Do In Kiruna During The Summer 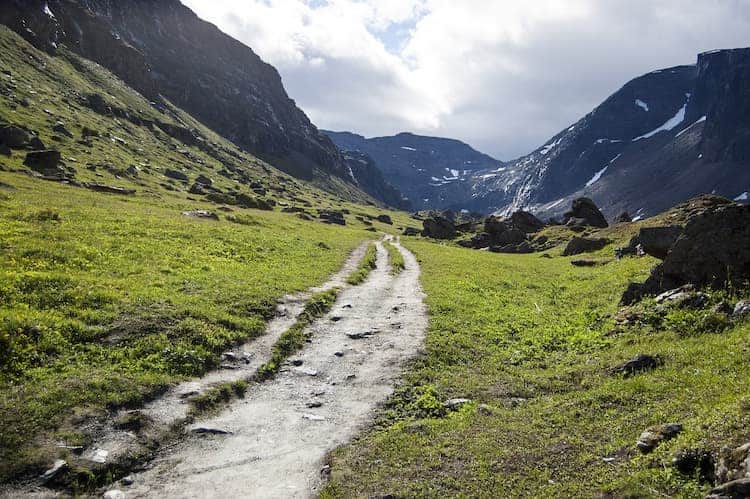 One of the best free things to do in Kiruna is to hike the midnight sun trail. The trail starts just a 20-minute walk from the city center and takes you up to the peak of the Loussavaara mountain. It’s quite a short hike at just 5km each way but the views from the top of Loussavaara over the tundra and back on Kiruna are quite spectacular. You also get excellent views of the midnight sun, hence the name.

The Loussavaara mountain is actually an inactive mine which means you can avoid the hike altogether if you want to and drive up to the top to see the beautiful views, but it’s not as good as doing the hike.

If you thought that a summer visit to Kiruna would have you missing out on the Ice Hotel, it won’t. The is now an Ice Hotel 365 that uses solar power to maintain an Ice Hotel all year round.

Although it’s not quite as iconic as the original Ice Hotel, you can still stay the night in an ice room or suite, wander around the lovely art gallery inside and enjoy some drinks at the wonderful Ice Bar.

Since Kiruna is home to the largest iron ore mines in the world a visit to the LKAB mines is a must whilst you were, and it can be done in both winter and summer.

When visiting the mines you will get an underground tour of the mines explaining the mining process along with the production of iron. You’ll also find a museum and a visitors center that is extremely informative about the mining history and history of the area.

Take A Look One Of Sweden’s Largest Wooden Buildings

The Kiruna Church was built in 1912 by the LKAB mining company and was designed to look like a Goahti, which is a traditional Saami tent. It’s one of the biggest wooden buildings in all of Sweden and in the past, it was voted as one of the most beautiful buildings in the country.

It’s quite an amazing building but it’s going to have to be relocated quite soon. Due to the size of the mines, the ground beneath the church has become unsafe in regards to stability so the mining company will have to rebuild it somewhere else one a new, more stable location where the mines won’t interfere. 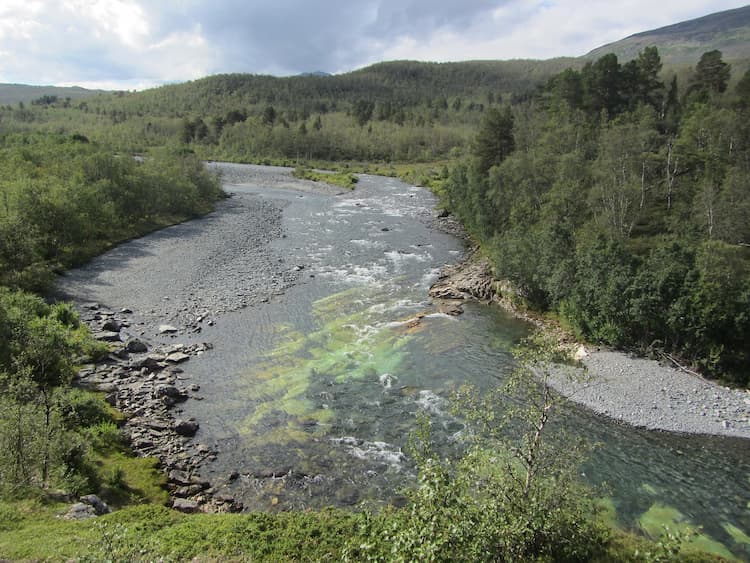 The Absiko National Park is one of the most popular national parks in Sweden and is easy to get to from Kiruna. Just hop in a car for an hour or so, or grab a direct train to the city. Entry to the national park is free, as Sweden follows the right to roam law.

The national park is home to an incredible tundra landscape with surrounding mountains and beautiful rivers. It’s covered in hiking trails and you’re likely to see some amazing wildlife including rare orchids, moose, capercaillie, grouse, and even the rare northern songbird.

The journey to the park is also incredible, and as you go you’ll see all the different landscapes morph into each other and change. The journey is almost as good as being in the park itself.

Take A Long Look At The Midnight Sun

The midnight sun is kind of the summer version of the northern lights in Kiruna. Between the dates of 7th of May till the 14th of July the sun in Kiruna never fully sets and instead goes through a prolonged sunrise and sunset merger and all the colors that go with it.

Take A Visit To The Esrange Space Center

Back in 1957, the Swedish Institute of Space Physics built its headquarters in Kiruna. Today it’s an educational campus that focuses on space technology and is also attached to the Esrange Space Center which launches rockets, furthers research into space, and tracks satellites. They are also adding on the Kiruna Spaceport where they hope to begin commercial flights to space.

You can go and visit the facilities but there is an excellent visitors center that is free to enter and you’ll learn pretty much everything you could ever want about space. If your kids love space and the universe, it’s a great place to take them.

Take A Trip To Jukkasjärvi

Jukkasjärvi is a town nearby to Kiruna and if you go to the Ice Hotel, then you’ll end up there. But, there is a lot more to do and see in the town than just the Ice Hotel. At Jukkasjärvi you can wander down the banks of the Torne River, check out the great architecture of all the houses built along it, and visit the old church that was built in 1607.

The Jukkasjärvi church is the oldest church in Swedish Lapland and you’ll be amazed by the beautiful paintings of both Sami and Christian origins as well as all the ancient relics you’ll also find inside.

There Is So Much To Do In Kiruna

Despite being so far north, Kiruna has a lot to do in at as you can see. The hardest choice is whether to go in winter or in summer, but autumn time in October is also meant to be beautiful.