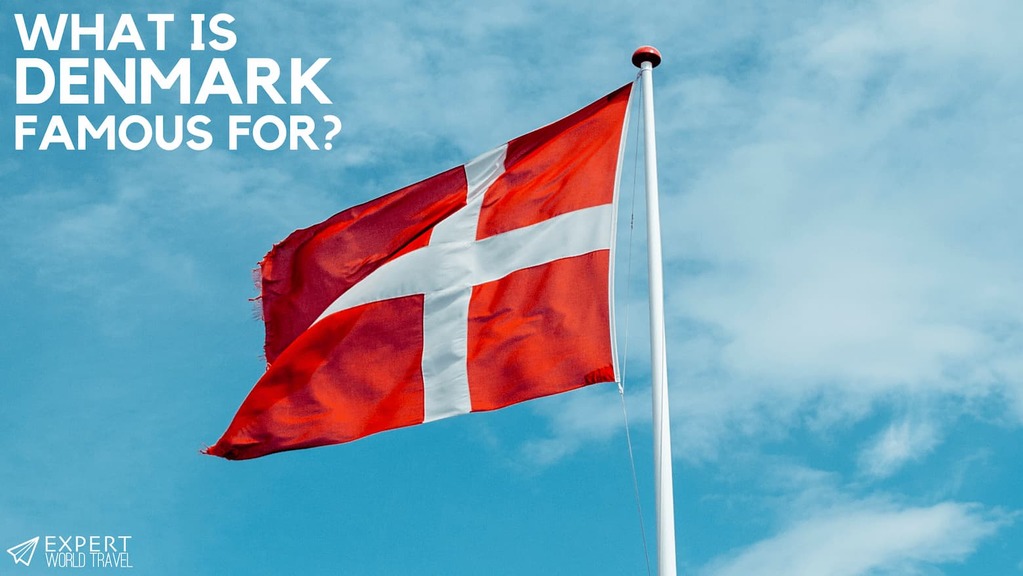 What is Denmark Famous For?

Are you thinking of visiting Denmark? The tiny country on a peninsula surrounded by islands is high on the list for vacation hotspots. Copenhagen, the largest city, is a haven of cultural experiences and exciting attractions while the northernmost town of Skagen quietly faces the dramatic North Sea. The Scandinavian nation earned the title as having the “world’s happiest people”, an honor that naturally entices millions of visitors every year. And with a mesmerizing history and colorful culture, Denmark’s “mark” on the world is evident.

The natural features, products, and innovations the world recognizes a country for is always a great guide on ideas for what to eat, see, do, and buy. Prepare for the surprises you’ll discover in Denmark with this list of what Denmark is famous for.

Yes, Great Danes are laidback, happy dogs, but they’re boar hunters from Germany, not Denmark. Hygge and happiness are the best way to describe the Danish people’s laidback lifestyle. Hygge (pronounced hoo-gah) means relishing the simple pleasures in life like a roaring fire, the aroma of fresh-brewed coffee, or spending time with friends and family. In turn, making the ordinary special leads to happiness. The way of life earned Denmark a spot at the top of the list for the world’s happiest nation. In fact, hygge was added to the Oxford Dictionary in 2017 with the definition of “the ability to recognize and enjoy your presence.”

One has to wonder how the Dane’s got their happy attitudes. The Vikings, their infamous ancestors, had the reputation of looting and killing their way around the world. But Denmark is the original home of the legendary tradesmen, craftsmen, and warriors, and their strong spirit and ingenuity live on as evidenced in monuments and places. If you want to delve deep into Viking history and culture, an enlightening and entertaining 7-hour tour departing from Copenhagen lets you visit famous monuments like the Roskilde Viking Ship Museum. 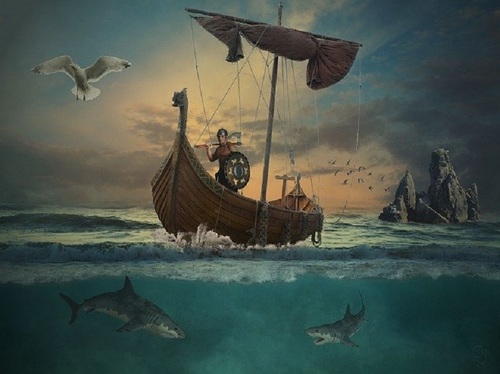 The Danish Royal Family is as respected and revered as British Royalty. All members of the family are given the title Prince or Princess except Queen Margrithe II. Frederick, the Count of Monpezat is Crown Prince and heir to the throne. He is the eldest son of the Queen and the late Henrik, Prince Consort. His wife holds the title of Crown Princess, and their children are Prince or Princess. Other royal family members include Prince Joachrin, the Queen’s youngest son, his wife and children, and two of the Queen’s sisters. Get a taste of Danish royal history at the Amalienborg Palace in Copenhagen where perhaps you’ll see the Changing of the Royal Danish Life Guards. 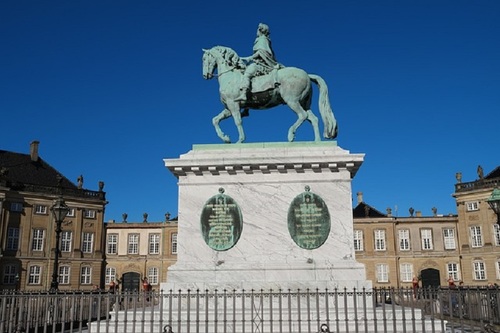 Denmark is famous for the stunning castles scattered throughout the country. The castles are elaborate homes of royalty, past, and present. Visit the Rosenberg Castle in Copenhagen to admire the Danish crown jewels. The best way to see Denmark’s castles is by joining a tour. For example, a tour of Copenhagen’s fairytale castles takes you to the ancient Frederiksborg Castle, the Fredensborg Castle, and the Kronberg Castle featured in Shakespeare’s Hamlet. 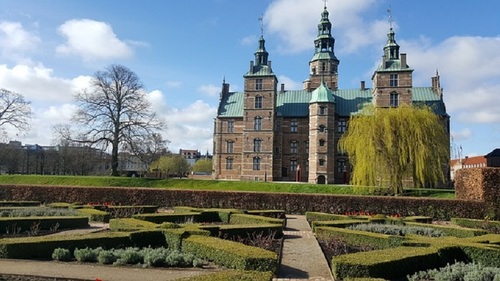 The world’s second-oldest amusement park is located in the heart of Copenhagen. Open since 1843, Tivoli Gardens has such a magical aura Walt Disney himself visited the park for inspiration. An attraction for all ages, Tivoli has elaborate lush gardens, an enchanting wooden roller coaster, thrilling rides, and entertaining performances. You’ll find places to relax, food stalls, and shops within the park. 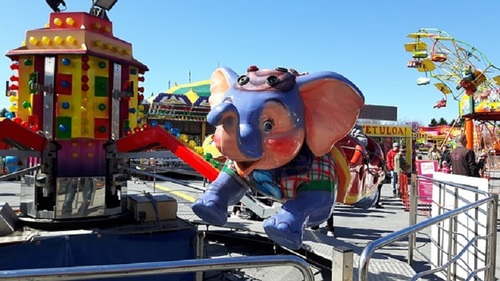 The Danish have always had a penchant for creativity, and one of Denmark’s citizens has been called the Father of Fantasy. Everyone around the world is familiar with all the works of Hans Christian Anderson. The Little Mermaid, the Ugly Duckling, and all of those endearing and everlasting fairy tales sprung from the imagination of the man who was born in Odense, Denmark in 1805. The town celebrates with a festival every August to honor the famous children’s author. You can visit the Hans Christian Anderson museum in Odense all year to learn about the author’s life. Some of the exhibits feature his original artwork. 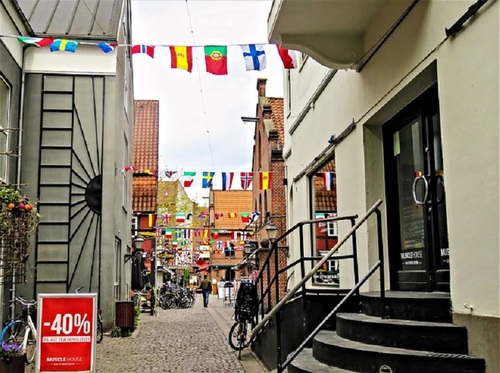 Over 100 years ago, the Danish decided to honor their famous story writer, Hans Christian Anderson. What better way than with a statue of one of his beloved characters? The Little Mermaid sits on a rock on the shores of Copenhagen gazing longingly toward the land where the human prince she fell in love with resides. The bronze statue near the Langelinie Promenade has become one of Denmark’s most iconic sites. The 1.25-meter-tall statue was created by Edvard Eriksen. 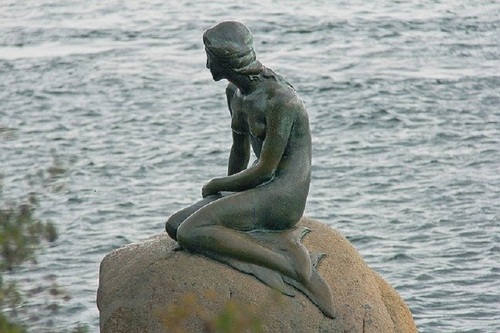 Freetown Christiana is an autonomous anarchist district in the capital city of Copenhagen. It was established in 1971 at an abandoned military base by hippies who broke in to squat there. The community gained notoriety for nearly 50 years for its open cannabis trade. Today, the 900 liberal, alternative thinking residents discourage drug activity in what was once known as the Greenlight District. The vehicle-free community features music venues, restaurants, and souvenir shops. 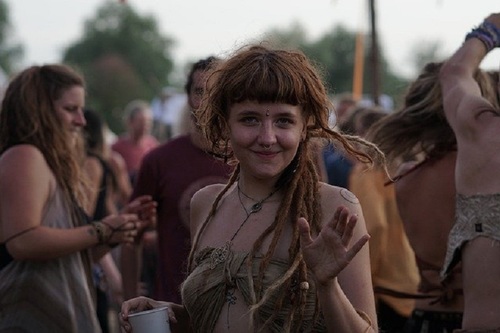 Along about the same time the hippies were settling Freetown Christiana, a music festival was born that would become one of Europe’s largest and the largest in the northern part of the continent. It was started by high school students Jesper Switzer Moller and Mogens Sandfaer along with promoter Carl Fischer in 1971. The next year, the festival became a fundraiser and taken over by the Roskilde Foundation. Today, thousands come to the Roskilde Music Festival every June and July to pitch tents and rock out. 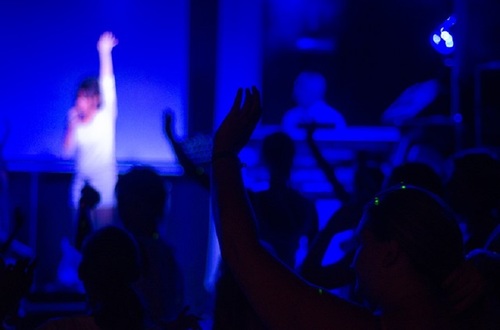 Bike riding is a way of life on Denmark’s flat streets, and Copenhagen is known as the most bike-friendly city in the world. The Danish ride bikes any time of the year and in any weather. Almost half of Copenhagen’s residents commute to work by bike, and children are taught to ride by school age. The city has 390 kilometers of safe, designated bike lanes. Super Cycle Highway connects Copenhagen to the town of Albertslund 17.9 kilometers away. The city times the traffic lights to the average speed of cycling to lessen stopping. 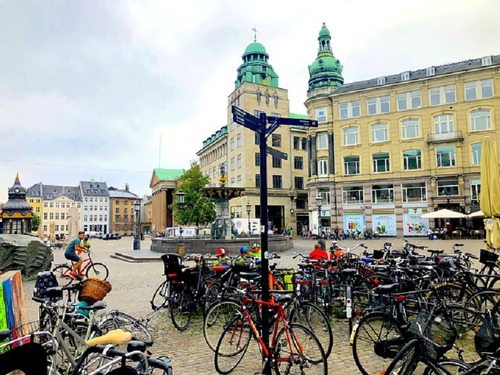 Beer has long been a part of Denmark’s culture partly because its too far north to produce wine, and, as in all of Europe, water could not always be trusted. Beer was considered a healthy way to consume calories. But it wasn’t until 1904 that Denmark entered the world stage for beer. Carl Jacobsen, son of the Carlsberg beer founder, revolutionized the beer industry by discovering a pure strain of lager yeast to create a pilsner bear that became popular worldwide. Today, Carlsberg, Denmark’s largest brewery produces Carlsburg Danish Pilsner. 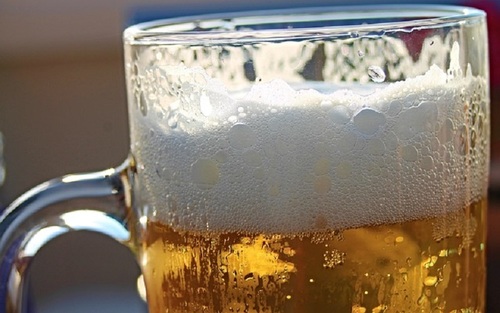 Hot dogs are a typical fast food in Denmark and sold out of hot dog vans in cities like Copenhagen. These hot dogs aren’t your regular ones with ketchup and mustard. They’re sold with all sorts of weird combinations of ingredients like artichokes, bell peppers, or even blackberries. Pork is a major source of the nation’s income, and the Danish eat lots of other pork specialties. The dish stegt flaesk med persillesovs is thick cuts of crispy fried pork belly served with potatoes and a parsley sauce. Flaeskesteg, another specialty, is pork roast cooked with cracklings. 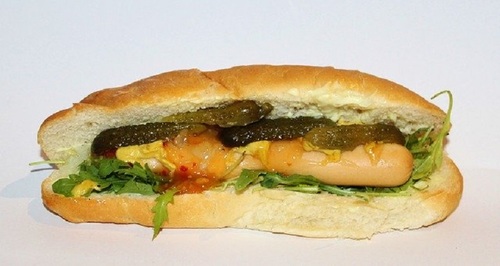 Danish butter cookies are loved around the world, and the classic tins they come in are almost as popular as the cookies. Baked in pretty shapes, the melt-in-your-mouth cookies are sold in shops around the country. Get them in the traditional butter cookie flavor or other varieties such as choco cashew. A tin of the cookies makes a wonderful gift or souvenir to take back home. 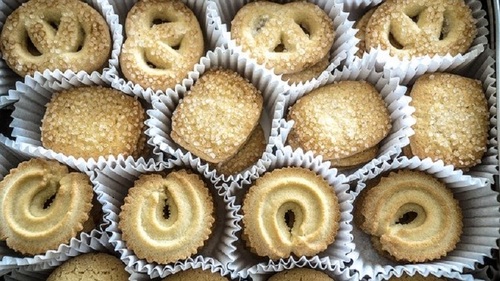 Danish pastry is also known worldwide although many, especially Americans, refer to the flaky pastries as simply a Danish. Austrian bakers introduced the method of baking the pasty to Denmark in the 1870s. The method involves a laminated and multilayered process in the viennoiserie tradition. To try an authentic Danish in Denmark, ask for Wienerbrod, which means Viennese bread. 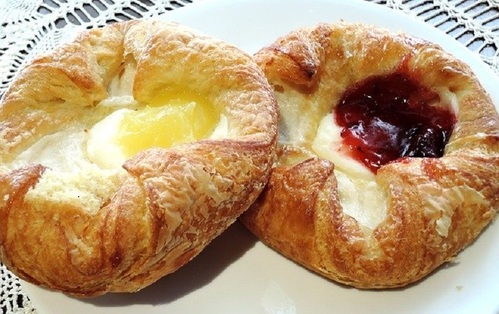 Licorice in Denmark is called lakrids. It’s the same black, sticky candy you’re likely familiar with except that its very salty. It’s a taste most people have to acquire, but it’s a favorite treat in Denmark. Another difference? In Denmark, you can find licorice in ice cream, cupcakes, biscuits, cheese, and even in cocktails. The gourmet licorice brand Johan Bülow found its claim to fame around the world. 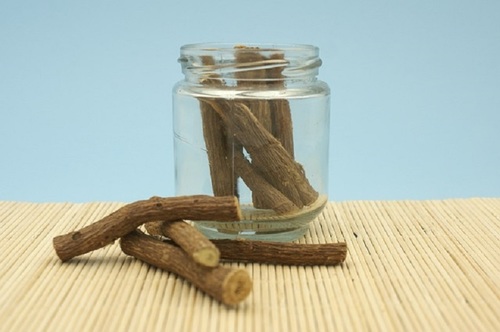 Practically every parent on the planet has stepped on a Lego in the middle of the night. Did you know the little plastic interlocking blocks were invented in Denmark? The word Lego comes from the two Danish words leg godt which means “play well”. The Lego company’s birthplace is the small Danish town of Billund. The founder, Ole Kirk Christiansen, invented them there in 1932. The original Legoland Amusement Park is in Billund and features a Lego house made of 21 huge interlocking Lego bricks, thematic restaurants, amusement rides, and attractions. 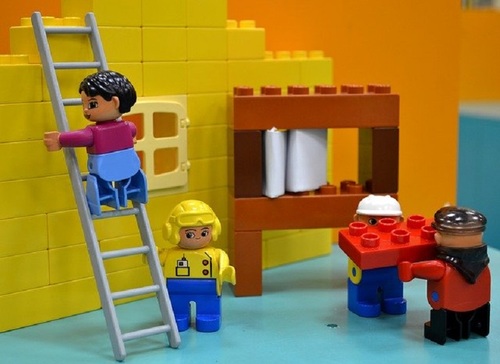 The Faroe Islands are a group of 18 volcanic islands in the Norwegian Sea between Iceland and Norway. Although they’re a two-hour flight away from Copenhagen, Denmark controls the islands politically. The island has charming harbor villages and is packed with outdoor adventures like hiking and boating. The islands also host live music festivals and other festive events throughout the year. Tours offer day trips to the islands. 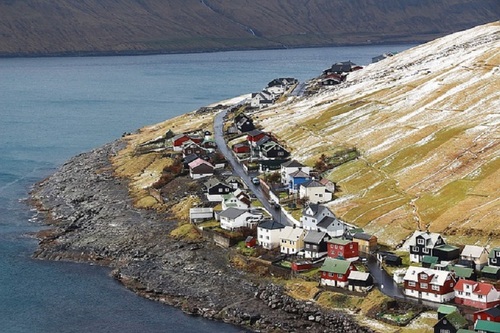 While traveling in Denmark, it’s worth the time to travel across Europe’s longest bridge. The five-mile-long Oresund Bridge connects Denmark to Sweden. The ride across is quite impressive as you leave the last glimpses of Copenhagen behind and see the new vistas of Sweden. The bridge helped to create a populous region of 3.7 million people. 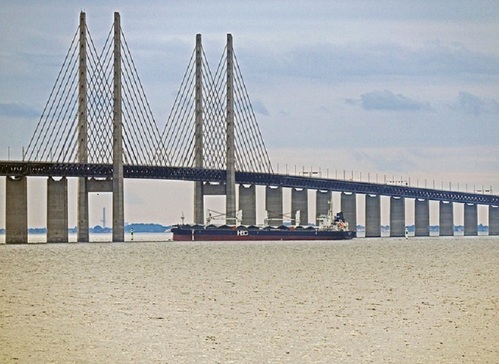 Step back in time in Nyhavn, Copenhagen’s 17th-century waterfront district. Nyhavn was originally a commercial port where ships from around the world would dock. The little port stayed busy with sailors, pubs, alehouses, and ladies of the night. Today the old 17th and 18th-century buildings have been restored and the canal is filled with historical wooden ships. The old pubs are now lively restaurants and bars. 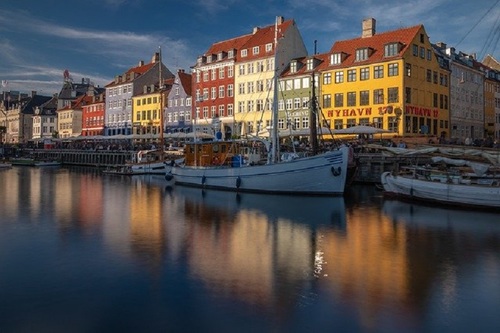 For its size in the world, Denmark is an impressive forerunner in renewable energy. In fact, 30 percent of the nation’s energy use comes from renewable sources. The Danish have long put their constant breezes and blustery winds to work, and you’ll spot windmills in the seas between the islands. Today, wind production in Denmark is higher than any other Organization for Economic Cooperation and Development (OECD) country. Denmark also utilizes bioenergy, solar, and geothermal energy. 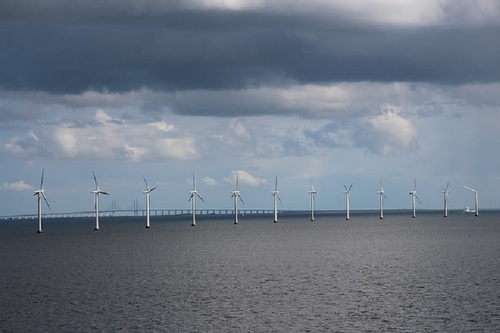