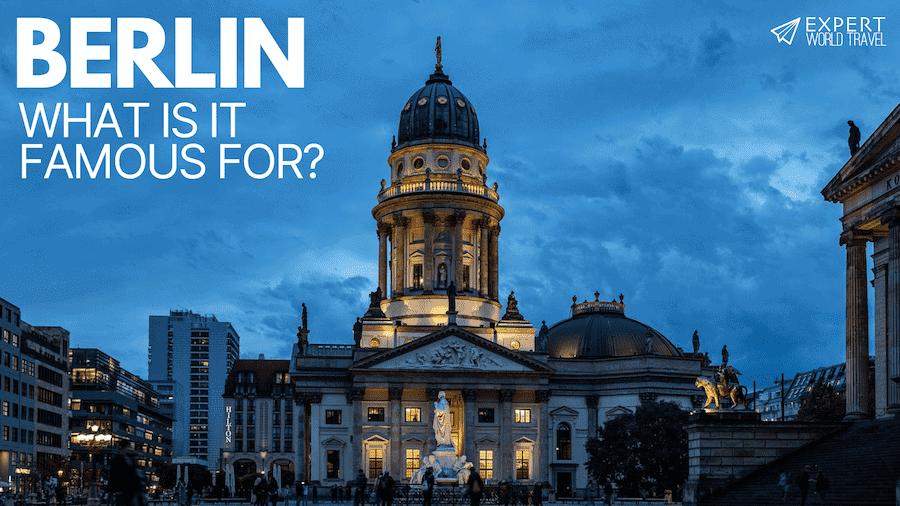 What is Berlin Famous For? [20 Things]

Berlin, the capital city of Germany is one of the world’s most visited cities. People come to the 60 thousand-year-old city to feel its rich, often turbulent history and the unifying energy that followed. Ancient arts and architecture blend with the nouveau for an unforgettable experience. Whether you’re looking to visit the many landmarks and museums, check out the foodie scene, or party the night away, Berlin is famous for all of the above, and more…

1.Remnants of the Berlin Wall 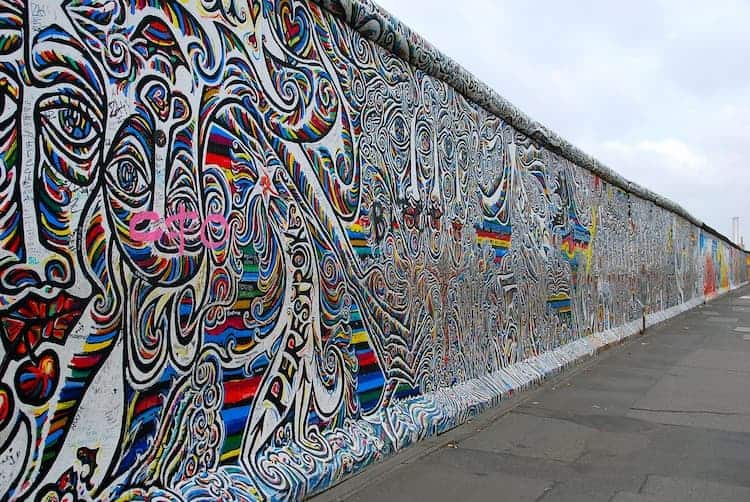 In 1961, the Communist government of the German Democratic Republic built a 4-meter high concrete barrier extending about 155 km dividing East and West Berlin. It included 57 bunkers and 293 observation towers. Entangled in barbed wire, the ugly wall separated Germany into two hostile states for 28 years. After political pressure from around the world and mass protesting, the wall was dismantled by people on both sides in November of 1989. Tourists include the infamous wall, now covered in graffiti by street artists, as a must-see monument to remember the times of the Iron Curtain and Cold War. 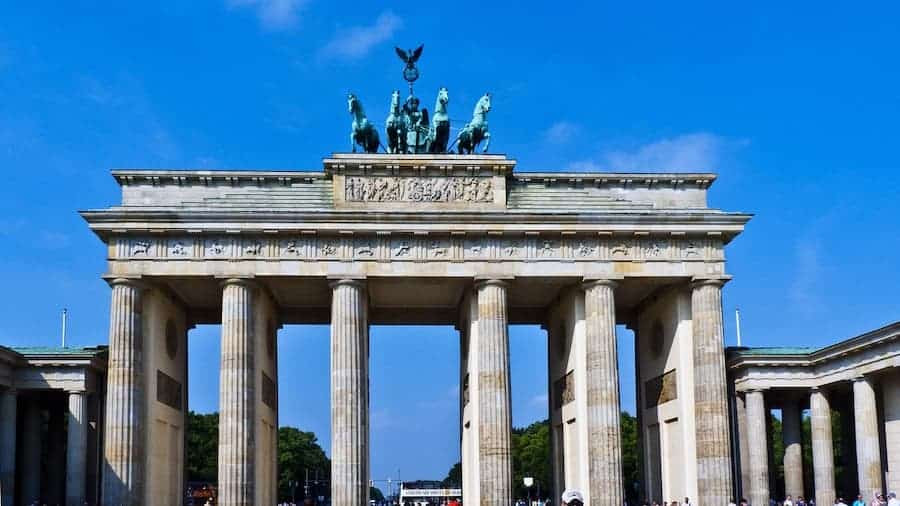 The Brandenburg Gate is one of Berlin’s best free attractions. Once a symbol of a divided nation, it was commissioned by King Frederick Wilhelm II in 1788. The monument is 26 meters tall and built of sandstone. The Neoclassical design was inspired by the Propylaea in Athens’ Acropolis. Part of the Berlin Wall, the gate was a physical and symbolic barrier and a gathering place for demonstrators. It served as the backdrop for US President Ronald Reagan’s famous 1987 speech to Mikhail Gorbachev to “tear down this wall.” Today, the iconic landmark is a symbol of unity. 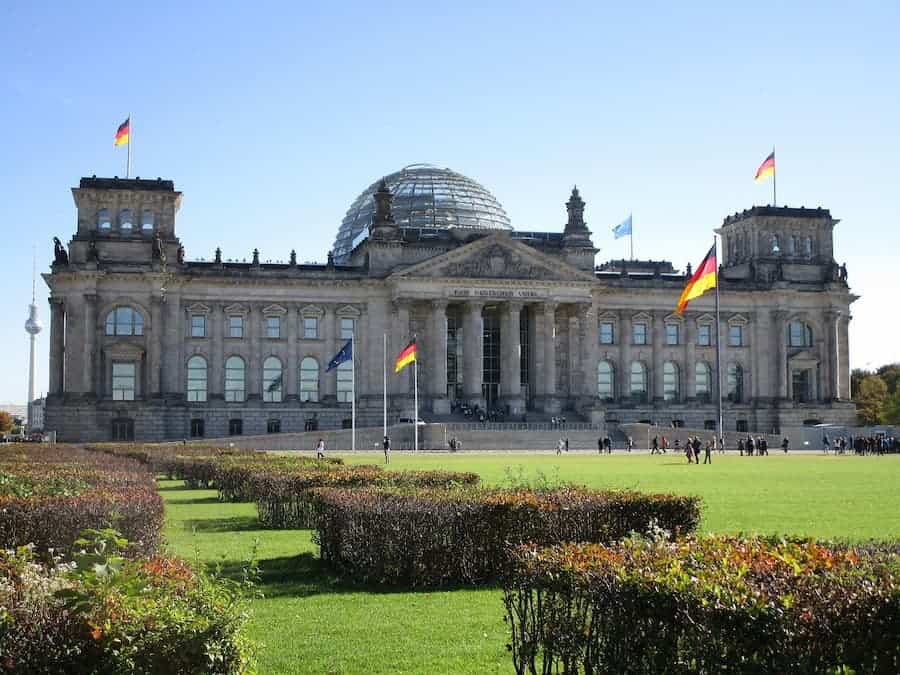 Located north of the Brandenberg Gate, the Reichstag was originally completed in 1894. The German Empire’s Imperial Diet used the Neo-Renaissance palace as a home until 1933 when it was destroyed by fire. After the reunification of Germany, the palace underwent a 10-year renovation and became the home of the German Parliament in 1999. The replacement dome is made of glass and has a rooftop restaurant with a panoramic view of Berlin. Audio guides for visitors in several languages provide information about the history of the building. 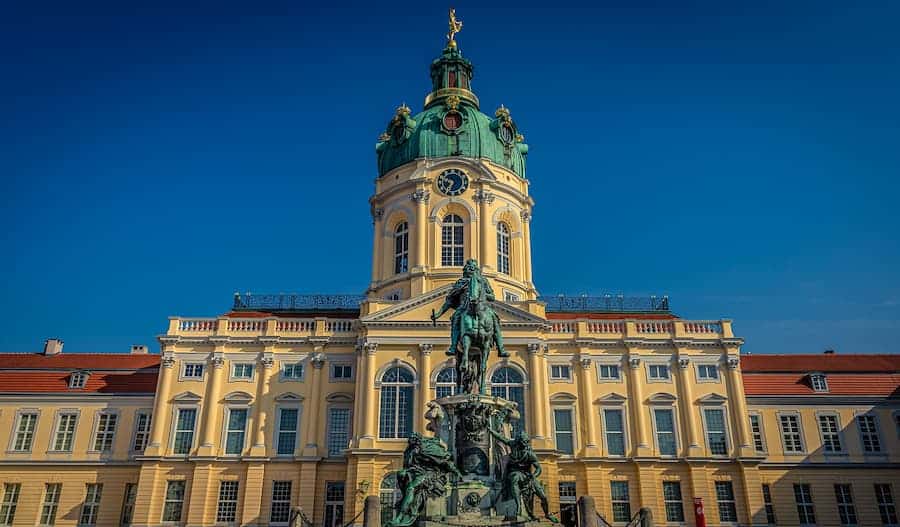 The 17th-century Charlottenburg Palace is Berlin’s largest and oldest Prussian estate. For decades, it served as the residence for German royalty. Visitors to the palace can get a glimpse into the splendor the Prussian Kings and Electors lived among. The restored palace includes a 50-meter high central dome, elegant Baroque and Rococo decor, a huge garden inspired by the ones at Versailles, a Grand Courtyard, and a Mausoleum with royal tombs. The palace hosts a spectacular Christmas market is hosted during the holiday season. 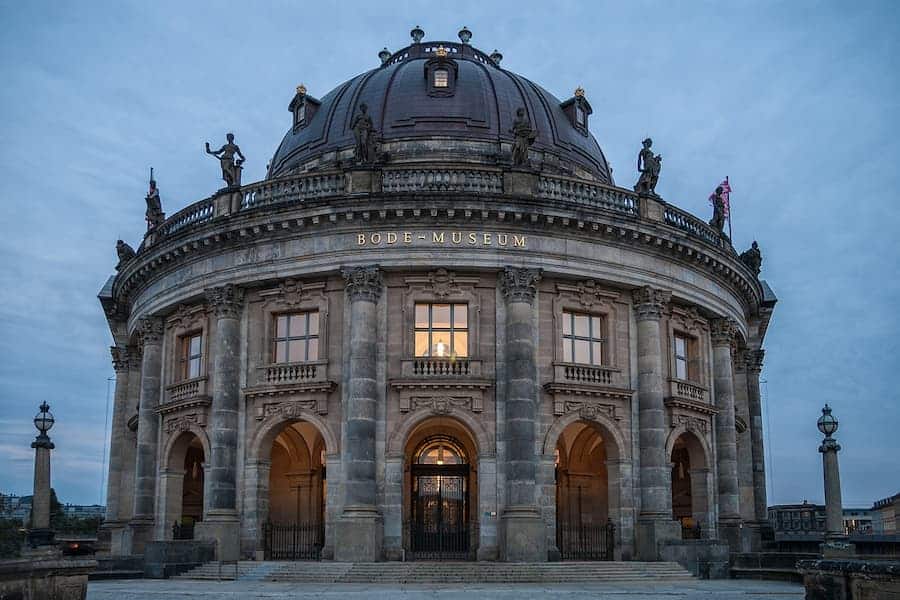 Berlin’s oldest and most fascinating museums are located on Spree Island between the River Spree and the Kupfergraben. Known as Museum Island, the UNESCO World Heritage Site is home to five of the city’s best museums. The first building constructed at the historic complex was in 1830. Named the Old Museum, it features a collection of antique statues, ancient Greek jewelry, and weapons. Later on, the New Museum was built to house exhibits of ancient Egyptian art and samples of papyrus. Other museums feature German and Italian sculptures from the early Middle Ages, Byzantine art, and Islamic art. 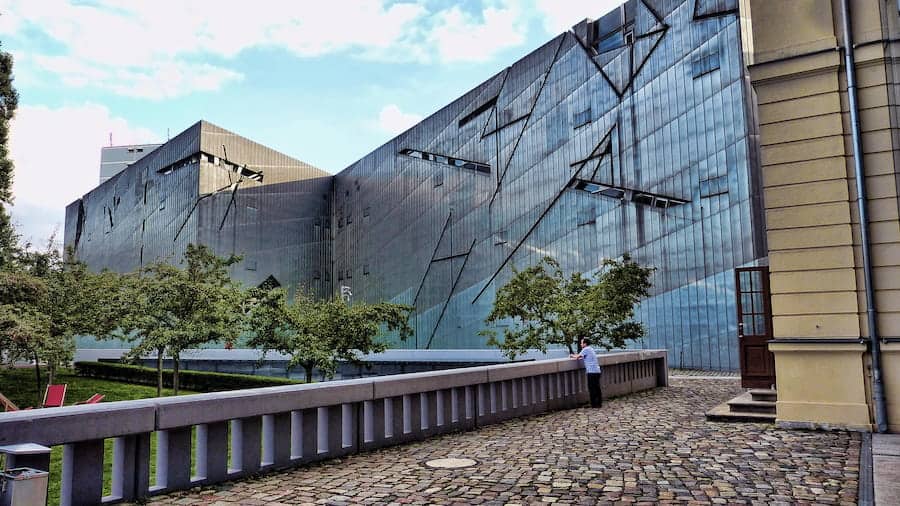 Established in 2001, the Jewish Museum contains historical artifacts and donated collections that chronicle the historic struggle of Jewish Germans beginning in the Middle Ages and ongoing to the present day. Designed by architect Daniel Libeskind, the building’s zinc-paneled exterior makes it especially striking. The poignant exhibits include religious objects, artwork, and 24,000 recovered and preserved photographs. Themed tours are given with English language audioguides. 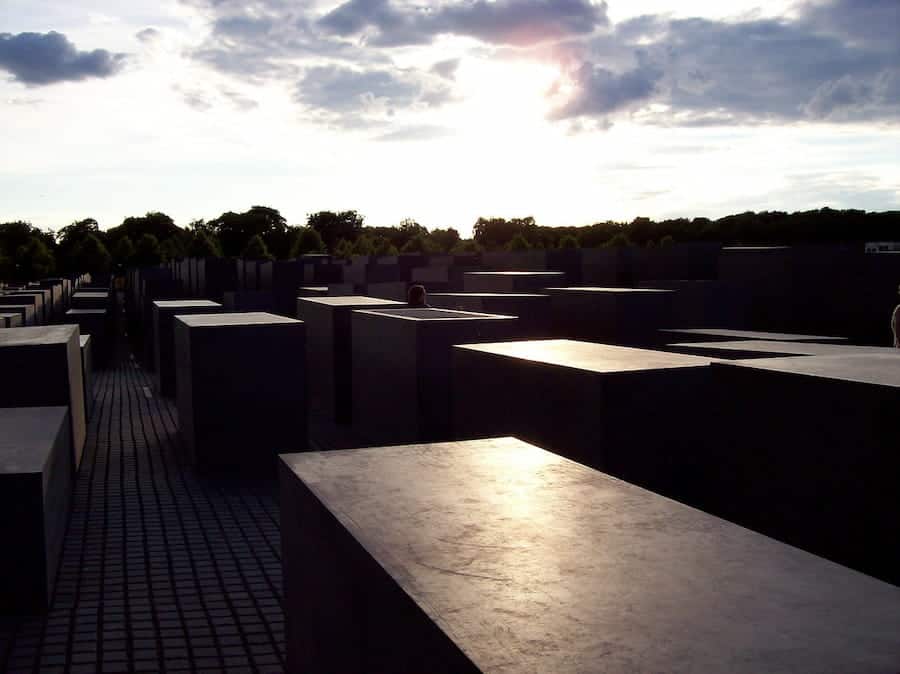 The football-field-sized Holocaust memorial was designed by American architect Peter Eisenman and inaugurated in 2005. It consists of 2,711 coffin-like concrete columns rising above the undulating ground. Visitors can access the labyrinth at any point for a self-guided tour. Visit the subterranean Ort der Information for especially emotional exhibits. Audioguides and audio translations of exhibits are provided. 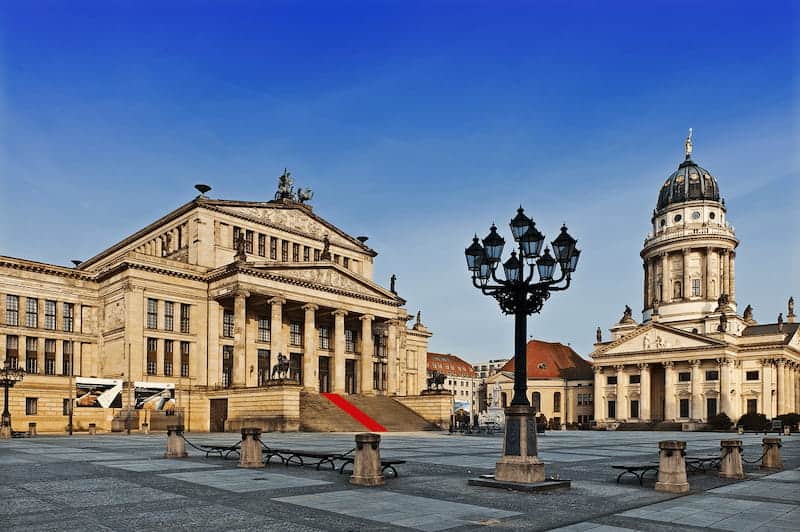 Gendarmenmarkt is also the site of another impressive landmark, the statue of the German poet Friedrich Schiller. Its surrounded by female statues representing the elements of Lyric Poetry, History, Drama, and Philosophy. In December, the entire square is transformed into the city’s famous Christmas Market. 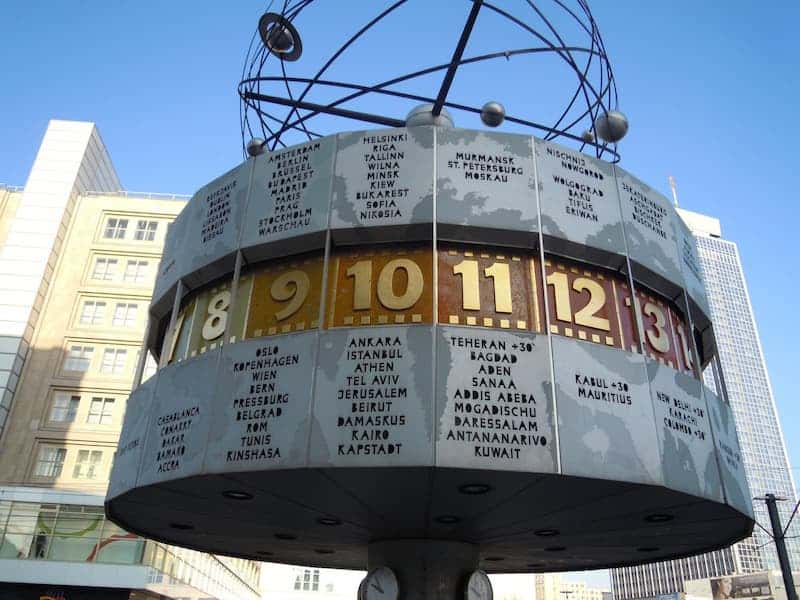 Alexanderplatz is another popular Berlin public square and is among the city’s largest. Called the Alex by Berliners, the square was formerly the center for East Berlin life. Today, the square is a popular meeting place and an important transportation hub. It’s lined with shopping malls, department stores, and snack bars, and is the site of the World Time Clock erected in 1969, and the Brunnen der Völkerfreundschaft (the Fountain of Friendship among Peoples.) The square is also home to the… 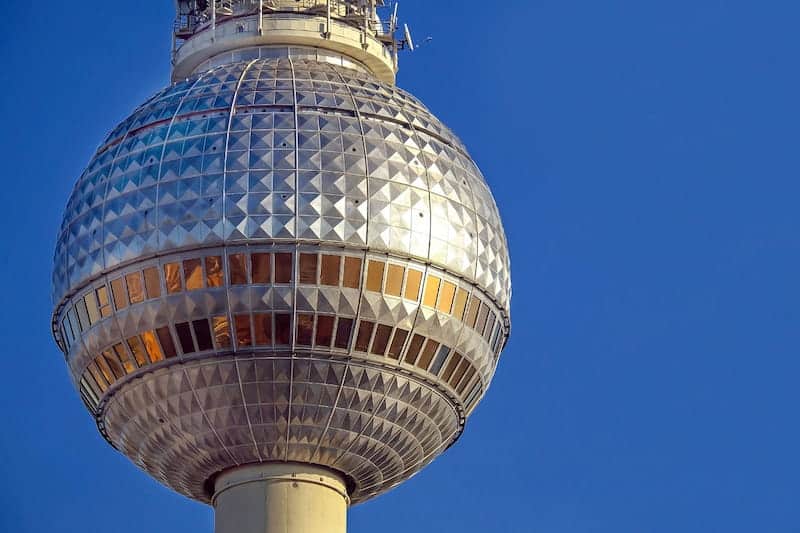 Nicknamed the “Telespargel, ” the Berlin TV Tower is a good place to get a breathtaking view of the city. Sitting at 207 meters (679 ft) above ground, visitors can have a memorable diner from the window seating overlooking the city lights after sunset. Amazing chefs prepare a three-course dinner served with sumptuous wines. 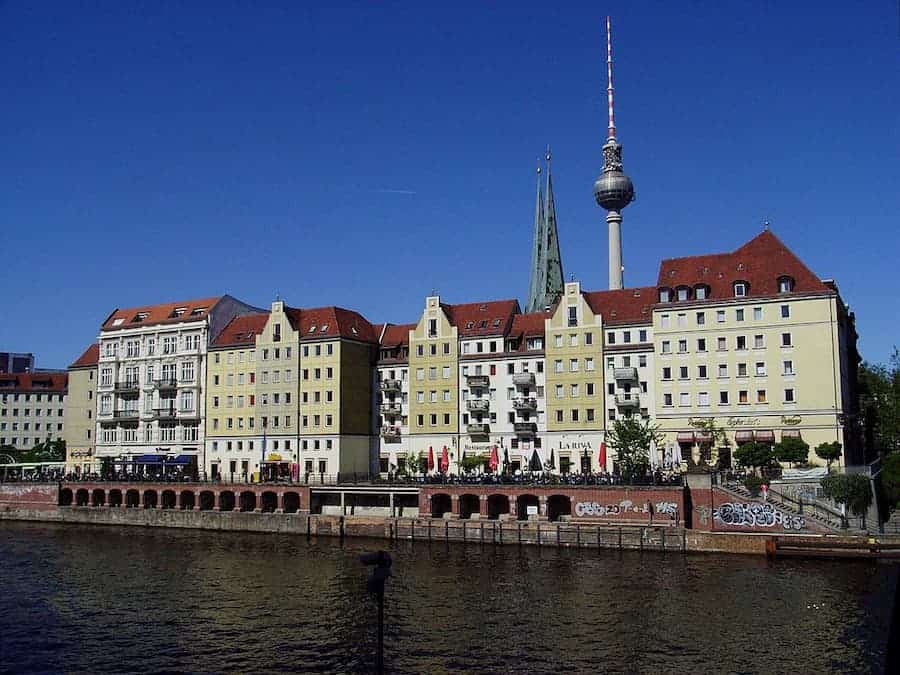 Nikolai Quarter (Nikolaiviertel) is located in the heart of old Berlin and home to many of the city’s oldest and most popular attractions. The area also has other touristy things to do like browsing workshops selling wooden crafts, basketry, and more. The nooks and crannies of the narrow streets are packed with restaurants, cafes, and shops. Here you will find old fountains, lanterns, and charming lattice windows on the older historic buildings such as the 1760s Ephraim Palace with its grand staircase and artistic and cultural exhibits. Another notable landmark is the Knoblauch House, built in 1760. The house represents the former homes of wealthy Jewish merchants. 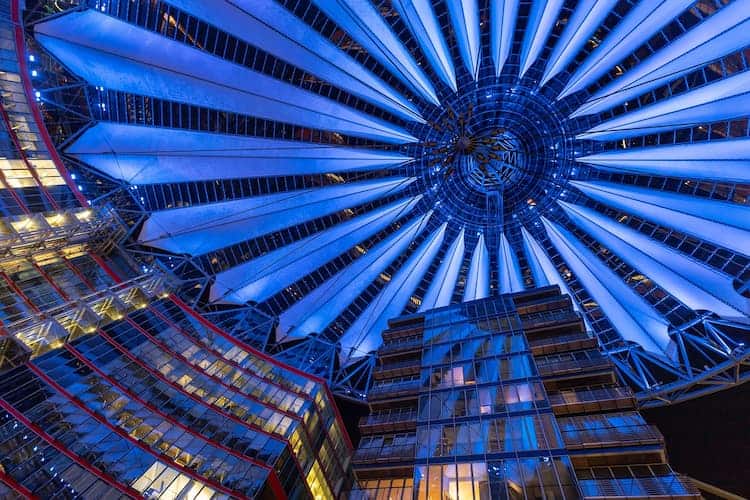 Scattered among Berlin’s old buildings are some amazing examples of modern architecture that are worth a gander. The Sony Center is a striking glass and steel complex on Potsdamer Platz. The geometrical IM Pei Bau is a museum annex with a glass spiral front. The Jüdisches Museum is a zigzag-shaped work of architecture that serves as a metaphor for Germany’s Jewish history. And the brainy Berlin architect Norman Foster of the Reichstag Dome created the curvy, oval-shaped Philology Library of the Free University. 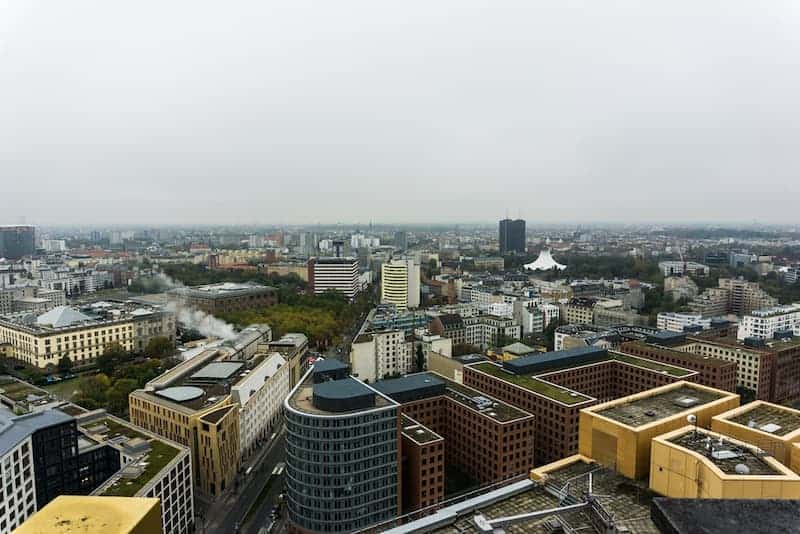 Taking in city views is a popular activity for tourists in Berlin. In addition to the TV tower and the Reichstag Dome, you can catch the Panoramapunkt, Europe’s fastest lift located at Potsdamer Platz to slide up the red-brick Kollhoff Tower for amazing views of the city center. It only takes 20 seconds to get to the bi-level viewing platform at 1oo meters. Stop by the 1930s-style cafe for a coffee and enjoy the sunset. Or for a fun and unique experience, board a hot-air balloon at Welballon Berlin and soar above the ground while still safely tethered to the ground. You can also enjoy sweeping city views while sipping a cocktail at the Park Inn Hotel’s rooftop lounge, the Panorama Terrasse, 150 meters above the Alexanderplatz. 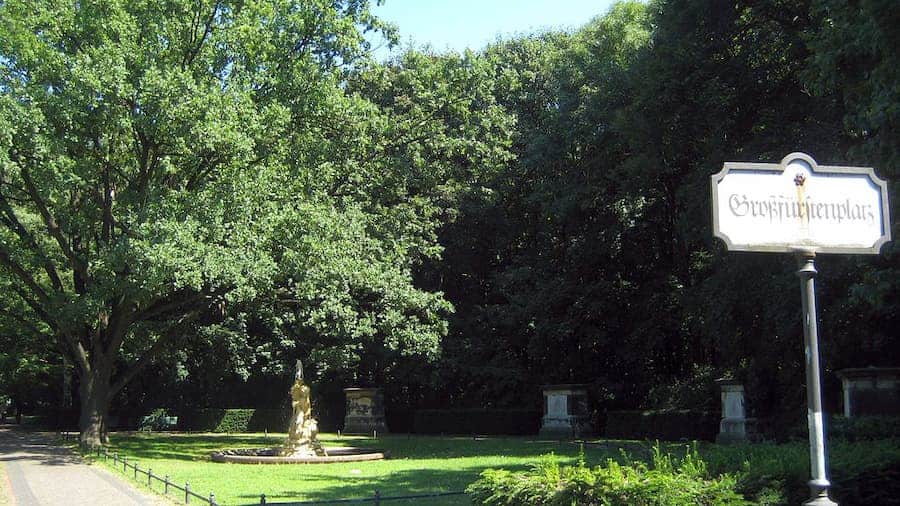 Berlin is blessed with pristine parks and gardens. Landscaped in the 19th century, Tiergarten is one of the largest urban parks in the world. The expansive park takes about an hour to walk across and is popular for strolling, jogging, picnicking, and sunbathing.

Visitors and residents can relax among royal splendors at the immaculate park behind the Charlottenburg Palace. The park is part formal French and part informal English with mature trees, shady paths, manicured lawns, flower beds, and a playground. 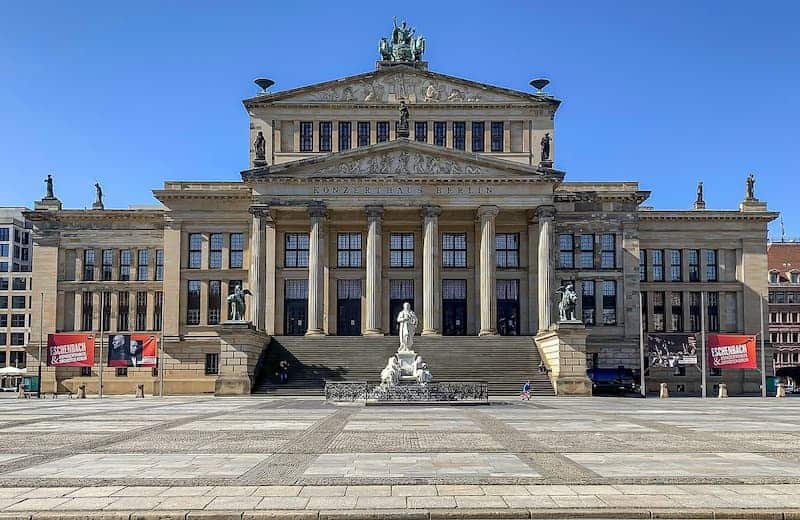 Berlin has strong musical roots from inspired classical musicians to providing a haven for pop icons like Bowie and Iggy. Dating back to 1821, the Konzerthaus is an archeological wonder and a venue for the popular symphony orchestra Konzerthausorchester Berlin.

The most iconic classical music venue is the Berliner Philharmonie, the home base for the famous Berliner Philharmoniker. Located in the Gendarmenmarkt, Konzerthaus is a jewel designed by Karl Friedrich Schinkel in 1821. Konzerthausorchester Berlin is the house band, and the venue also hosts visiting orchestras.

For the best in karaoke, head to Bearpit Karaoke in Mauerpark for Feel-good Sunday. And the Astra Kulturhaus Concert Hall with its commie-era decor is a venue for pop, rock, and electro musicians. 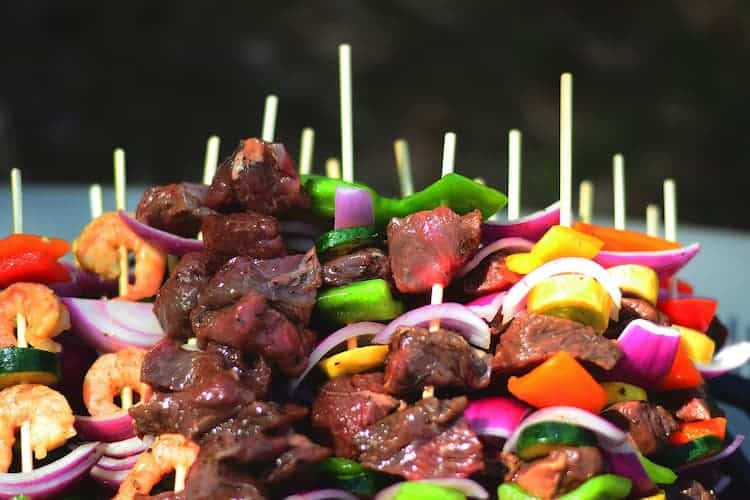 Thanks to a variety of global influences, Berlin has an excellent selection of dishes served up as street food. Pizza flatbreads called pides and grilled kabobs are the result of influences from the long-standing Turkish population. Other sectors of society leaving gastronomic influence include Poland, Italy, Vietnam, China, and Russia.

Visitors can get the very best in food and drink at Markthalle Neun in the Kreuzberg district every Thursday beginning at 5 p.m. Dishes include Mexican tacos, Chinese dumplings, freshly made pasta, and artisanal hotdogs. For an authentic Berlin foodie experience, look for currywurst, sliced grilled pork topped with a sauce made of ketchup, curry, and other spices. The dish was invented in Berlin in 1949. 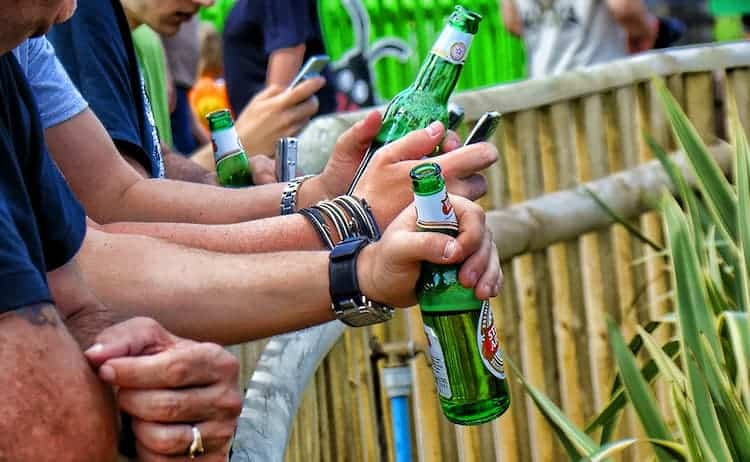 The International Beer Festival is a complete German experience you’ll only find in Berlin. The three-day festival is the most awaited event in the city. The festival features more than 2,499 specialty beers from 90 countries around the world as well as famous local beers. The mile-long stretch of street is also packed with live music and other entertainment. You’ll also find plenty of international culinary delights at the festival. The event takes place every year from August 2nd to August 4th. 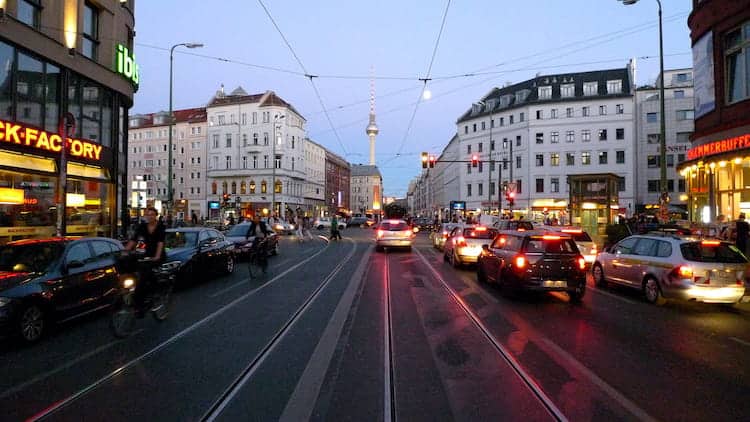 Visitors often join the locals for a night of bar-hopping while in Berlin. The east Berlin neighborhood of Prenzlauer Berg is a good place to start. You’ll find several popular watering holes north of Kollwitzplatz, a city square in Prenzlauer Berg. For beer lovers, the Monterey Bar on Danzigerstraße offers around 250 German and international beers. The Badfish Bar on Stargarder Straße serves whiskey cocktails and craft beers in a bar with an old-school New York City flair. The hip, quirky WohnZimmer on Lettestraße resembles a flea market for a unique drinking experience. 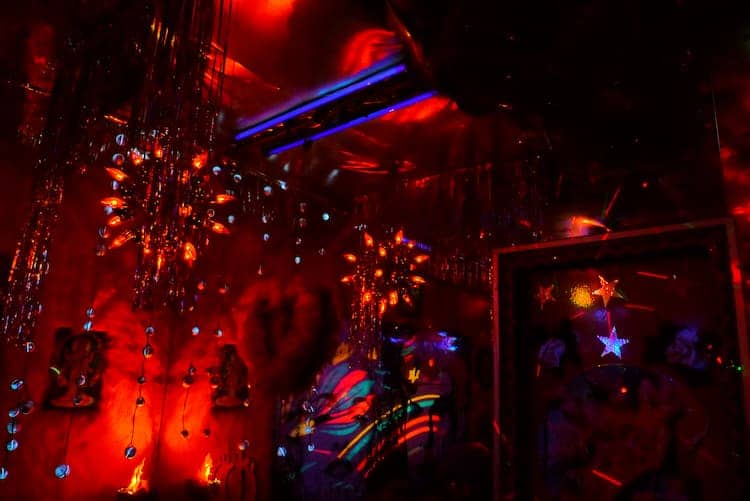 Pleasure seekers of all stripes can live out their fantasies for the night in several nightclubs around Berlin. At the Kitkat Club, affectionately called “the Kitty,” you can be naughty or nice, but the club does have a dress code. The erotic nightclub, opened by an Austrian filmmaker features sexy electro dance music. The LGBT-friendly Roses Bar in Kreuzberg has walls covered in pink fur. The drinks are super-cheap and the bartenders pour generously. The Insomnia Club is a former 19th-century ballroom that is now a Berlin nightlife fixture. The club features international DJs along with performances from burlesque to bondage. The dress code is sexy yet elegant. 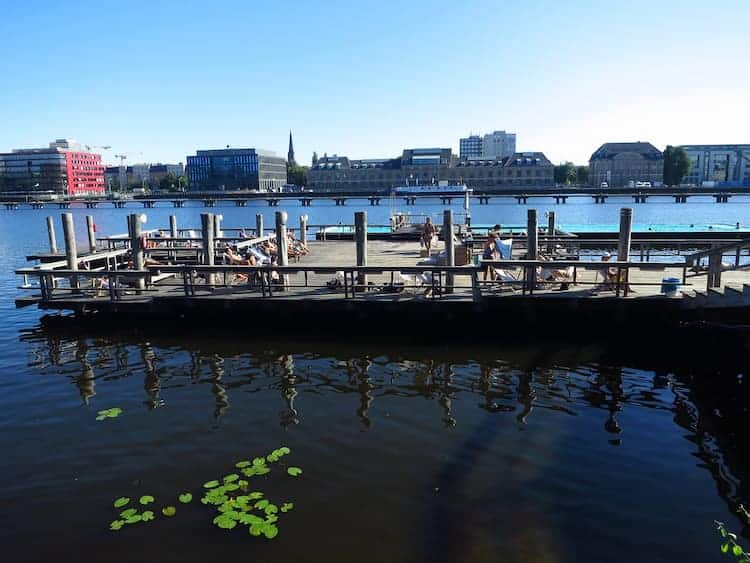 Visitors looking for quirky experiences along with the traditional museums and landmarks of Berlin won’t be disappointed. Go for a swim or get a massage at Badeschiff, an old river barge filled with water and moored in the Spree River. The Silent Green Kulturquartier is a former crematorium with concerts, movies, and a snack bar. And for a whacky collection of curiosities, visit the Museum der Unerhörten Dinge featuring oddities like displays about Swiss cowpat-worshippers and Goethe’s stone rose.