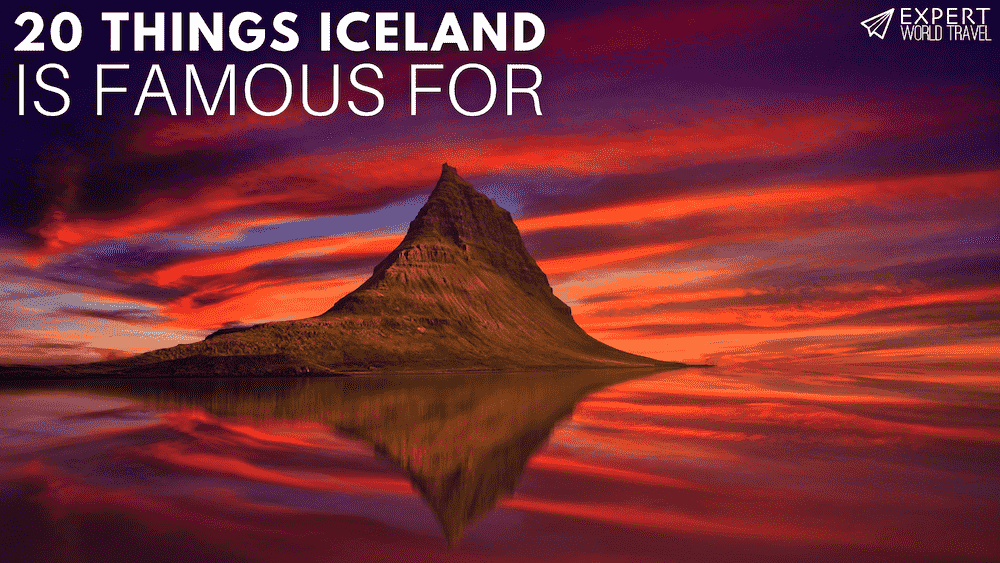 What is Iceland Famous For?

Glaciers, volcanos, and geysers. Oh my! Iceland made the travel headlines in 2010 when the volcano Eyjafjallajökull ( pronounced: ei uh fyaat laa yow kl) erupted. Air travel was disrupted for six days while the volcano spit out tons of ash. Curiously, many eyes filled with wanderlust turned towards the Nordic Island nation. After all, dramatic landscapes is pretty much at the top of the list for what travel adventurists want.

So ironically, what stopped those planes in 2010 brought in more in the next two decades. Now millions have experienced the wonders of Iceland. If your interest in adding the island to your travel list is piqued, learn a little about the history, culture, and geology with 20 things Iceland is famous for. 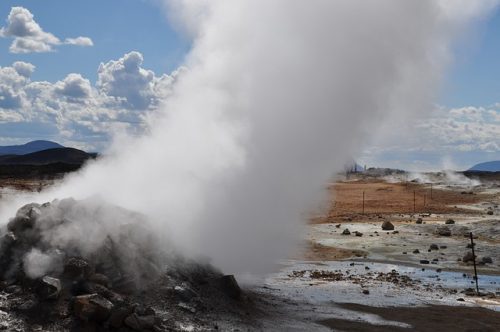 The Land of Fire…

Glaciers, ice caps, and lava fields give Iceland the title “Land of Fire and Ice.” The Nordic Island has 32 volcanic systems with 130 active and inactive volcanoes. Another 30 lie under the surface. Like mountains, the major ones have names like Katla, Krafla and. Askja. Currently, Holuhran is the most recent to erupt (2014). It’s located in the middle of the island. Icelanders have grown used to them, and most cities and towns are built far enough away to avoid the spewing ash and glacial flooding. Tourists anxious to photograph them can do so safely by tuning in to the local news. 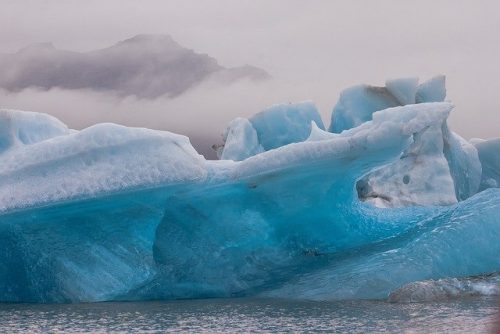 Competing with volcanoes and lava fields for the attention of travelers, glaciers cover about 11 percent of the island. The glaciers are also named, and there are 269 of them including ice caps, mountain, alpine, piedmont, cirque, and outlet glaciers. With an area of 8, 300 sq km, Vatnajokull is the largest ice cap and the largest glacier in Europe. It’s about the size of the U.S. state of Rhode Island. 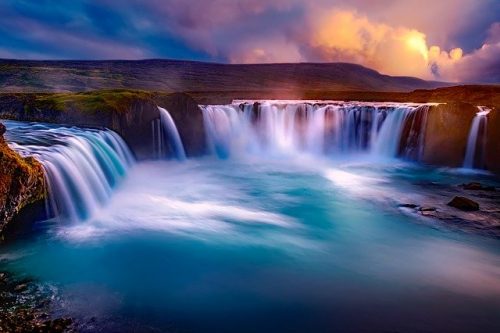 Thunderous waterfalls add lots of drama to Iceland’s landscape. Gullfoss (Golden Falls) is the most popular with tourists. Part of the Golden Circle route, Gullfoss spills a massive amount of water down a series of steps for 32 meters before gushing into a canyon below.

The glacial river Jökulsá á Fjollum supplies the water for Dettifoss, Europe’s most powerful waterfall. The river originates at the glacier Vatnajokull. The sound it makes is the loudest in all of Europe, and early in the morning, you’ll see inky rings around the edge. 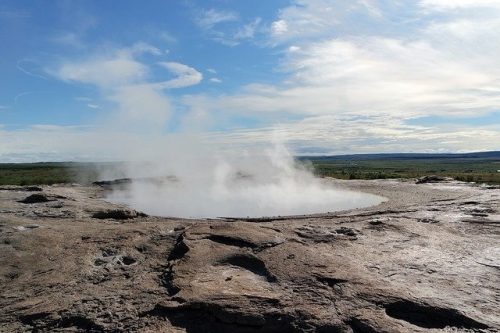 Located in the Haukadalur valley, the Great Geysir is the planet’s oldest known geyser. It was discovered in 1294 on the slopes of Laugarfjall hill. Its eruptions can propel boiling water up to 70 meters. The eruptions are sporadic and have stopped for years at a time. It became dormant in 1915 and was reactivated in 1935 after an earthquake. Currently, the Great Geysir erupts around every eight to 10 hours and is a major tourist attraction. The Strokkur geyser is located nearby.

Located in the southwest region of the island, Reykjavík is Iceland’s capital city. The name “Reykjavík” translates to smoky bay. It’s thought to be the nation’s first settlement, and around 60 percent of the population resides here. Reykjavík has the reputation of being one of the world’s cleanest, greenest, and safest cities. The city has made a dedicated effort to increase its greenery. (The Vikings chopped down most of the trees). 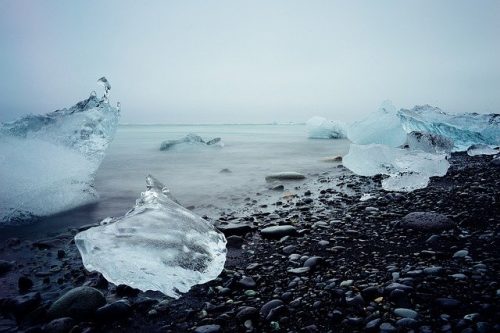 We all know that Iceland isn’t a tropical getaway, but it does have beaches, and they are unlike any others in the world thanks to their unique black sand. The rare phenomenon is caused by ash, lava fragments, and minerals left by erupting volcanoes. Reynisfjara is the most famous black sand beach. It’s located about 112 miles from the capital city.

Black Lava Pearl Beach at the end of the Snæfellsnes peninsula has a popular hiking path called Nautastígur meaning “path of the bull.” Diamond Beach is another black sand beach located next to Jökulsárlón glacial lagoon. It’s littered with chunks of ice that broke off of a nearby glacier. 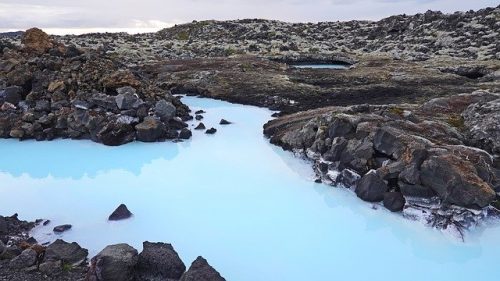 Iceland has many natural hot springs. Named by National Geographic as one of the 25 Wonders of the World, the Blue Lagoon is the most famous. The milky blue waters contrast with the surrounding black lava field for a stunning effect. The water is a soothing 36-38 degrees C (100F). Since the water has no chlorine added, bathers are required to take an extended shower. For $46 USD, you get a mud mask, towel, and a drink. 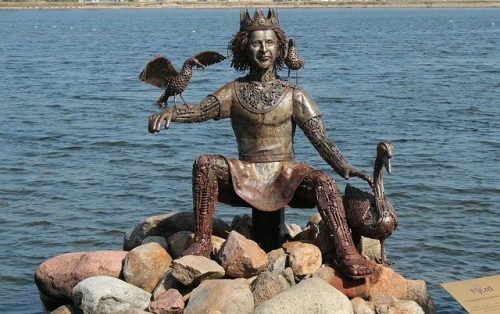 Early Icelanders used Norse mythology to explain all the beauty and natural phenomenon that surrounds them. Iceland is the last Nordic country to stop worshipping Norse deities and embrace Christianity. Their beliefs are traced to the The Prose Edda from Snorri Sturlusson’s poetry anthology. Goðafoss to the north is known as the “Waterfall of the Gods” and is said to be the final resting place of Viking pagan beliefs. Today, it’s a significant historical landmark. 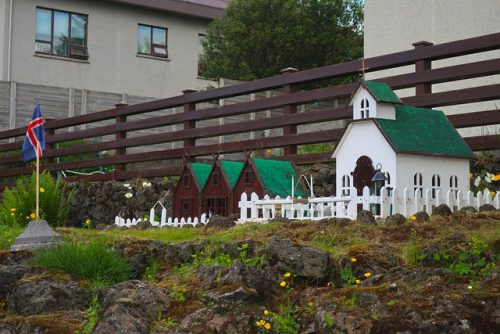 Norse mythology may be buried at Goðafoss, but Icelandic folklore is alive and well. Centered mostly around elves and trolls, the folklore is still believed by many Icelanders, even up to 80 percent. You’ll find tiny replicas of churches and houses on lawns next to the highway. Called Álfhól, the little dwellings give the huldufólk (hidden people) a place to live. 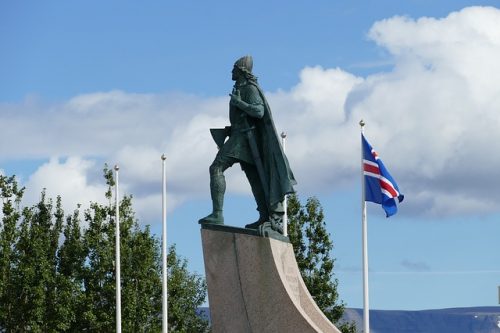 Iceland’s flag is famous around the world, and the nation had many flags before it. The current flag came after a long struggle to gain independence from its Nordic ancestors. Evidence shows that the first inhabitants were Gaelic Celts from Ireland. The Norwegian Vikings left their homelands because of civil war. Irish monks were enslaved or ousted, and Iceland became a commonwealth ruled by Norway, Denmark, and Sweden. Iceland gained true independence on June 17, 1944. 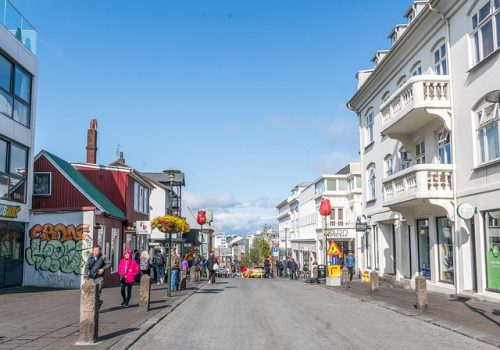 Iceland has long restricted the use of foreign words. Because the island is so isolated, the language hasn’t changed much since the 13th century. Consequently, Icelanders can still read historic texts and sagas written more than 800 years ago. It’s a unique North Germanic language derived from Old Norse. The language even has its own day of celebration every November 16. The alphabet has 13 vowels and no c, w, q, or z. 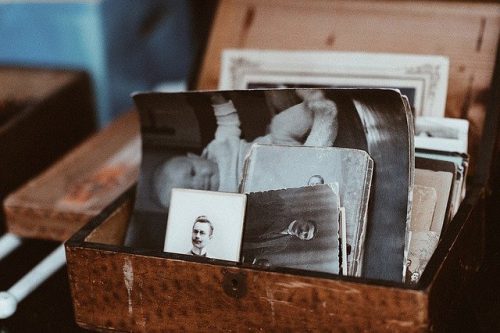 Icelanders are obsessed by genealogy. Since the population is so small, an online database makes it possible to trace ancestors back 1200 years. A phone app called Íslendingabók lets them check the family tree before exchanging numbers before a possible romance. It’s mainly a joke, though and incest is not rife. The census has grown in recent years because of immigration mainly from Poland. 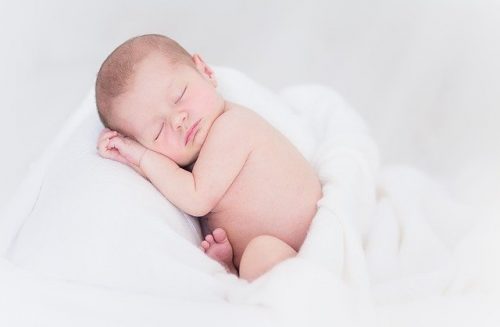 When it comes to surnames, Iceland’s system is complicated. First names are often chosen based on who the mother-to-be dreams about while pregnant. It’s an old Icelandic superstation. Icelanders don’t exactly have a last name. The family name is the father’s first name followed by son or dóttir (daughter). For example, if you’re the son of Gunnar, your last name will be Gunnarson, and a girl’s surname will be Gunnarsdóttir. A new baby’s name has to be approved by the Icelandic Naming Committee. 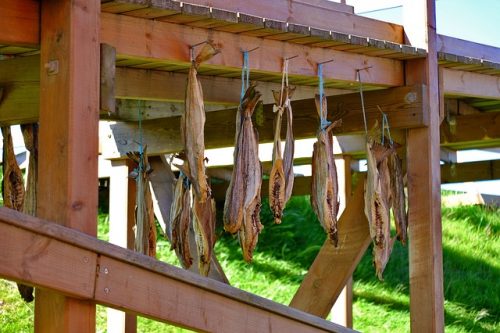 There are a few Icelandic delicacies that aren’t for the faint of heart. Hákarl is fermented shark meat concocted by cleaning, beheading, and burying a shark in the soil for several weeks. It’s then uncovered and dried for several months. It smells terrible, and mostly a joke reserved to play on tourists. Then there’s puffin heart, eaten by some older Icelanders. It’s said to taste like beef jerky. 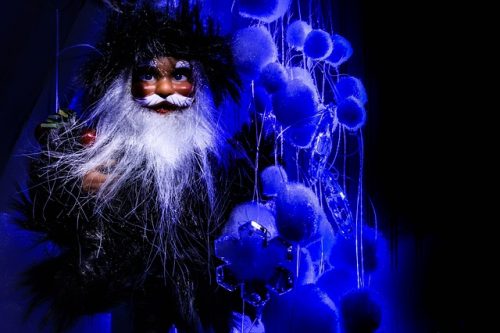 No, Virginia, there is no Santa Claus. Not in Iceland. But no worries. Thanks to their love of folklore, Icelanders have 13 jólasveinar, or Christmas lads. They are little men who live in of Dimmuborgir’s lava fields and visit children while they sleep. All 13 have different personalities based on their names. For example, Sausage Swiper will come and take all the family’s sausages. The children place a shoe in the window each of the 13 days before Christmas. If the children have been good, he’ll leave candy in the shoe. If they’ve been bad, they get a rotten potato. 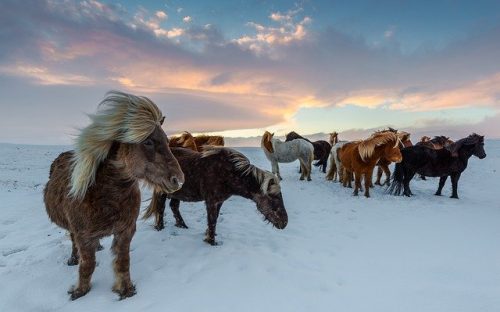 The Icelandic horses are descendants from the ones the Norwegian Vikings brought over a thousand years before. The Albingi passed laws in 980 AD to prohibit other horse breeds from being imported. To this day, the Icelandic breed is the only one allowed in Iceland. The horses can be exported, but once gone, they can’t be brought back into the country. Horses are also significant to Norse mythology. Sleipnir was an eight-legged horse that belonged to Odin, father of the Norse Gods. Legend says that Sleipnir carved the Asbyrgi canyon by slamming a hoof into the ground. 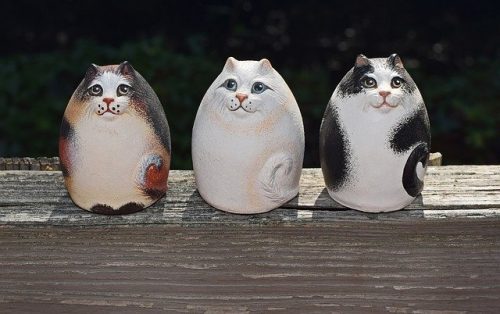 If you’re a dog person, you might not be happy living in Iceland. Not in the past, anyway. Icelanders enjoy many freedoms, but they have very strict pet laws. Reykjavík prohibited citizens from having dogs in 1924 after a spike in cases of echinococcosis. The tapeworm can spread to humans, and the mortality rate is 75 percent. Luckily, it’s preventable today and citizens can have a dog with the proper vaccination and certification.

The previous ban led to a huge increase in the number of cats in the country. Reykjavík calls itself the “cat capital” and sells merchandise to tourists. There’s also a Facebook group called the Cats of Reykjavík. 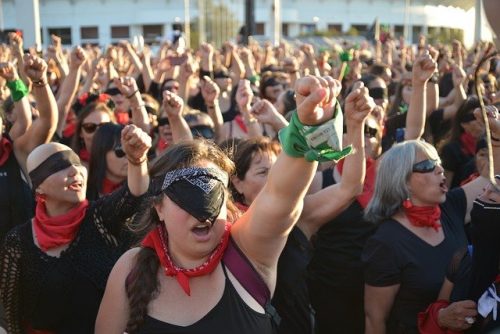 Iceland is famous for having the longest serving female head of state that was democratically elected. Born in 1930, Vigdís Finnbogadóttir was elected in 1980 as Iceland’s fourth president. She is currently a UNESCO Goodwill Ambassador. And when Icelandic women learned they were paid around 14-18 percent less than men in 2016, they protested by leaving work at 2:38 pm, the exact moment they started working for “free.” 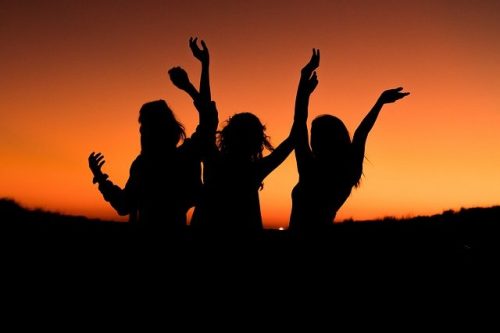 And Females in Parliament

Vigdis Finnbogadóttir was Iceland’s president for 16 years and was much loved. This was the longest term for any female president, and today, Iceland boasts the most gender-equal parliament in the world, and the nation has been named Most Gender Equal Country nine times. 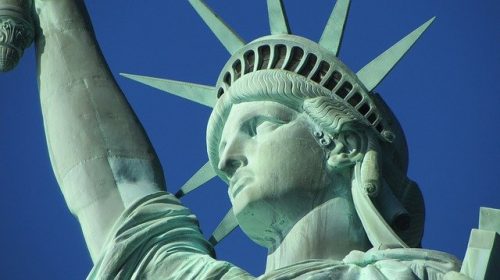 “In 1492 Columbus sailed the ocean blue.” It’s a rhyme American children learn in kindergarten. Unfortunately, it led to the belief that Christopher Columbus “discovered” America. He did not. Leif Eriksson, born in Iceland around 970 AD, sailed to Newfoundland and Greenland five centuries earlier. Columbus, a merchant, exploited the New World and treated the indigenous people unkindly. In July of 2020, protestors in Baltimore toppled his statue and tossed it in the harbor.