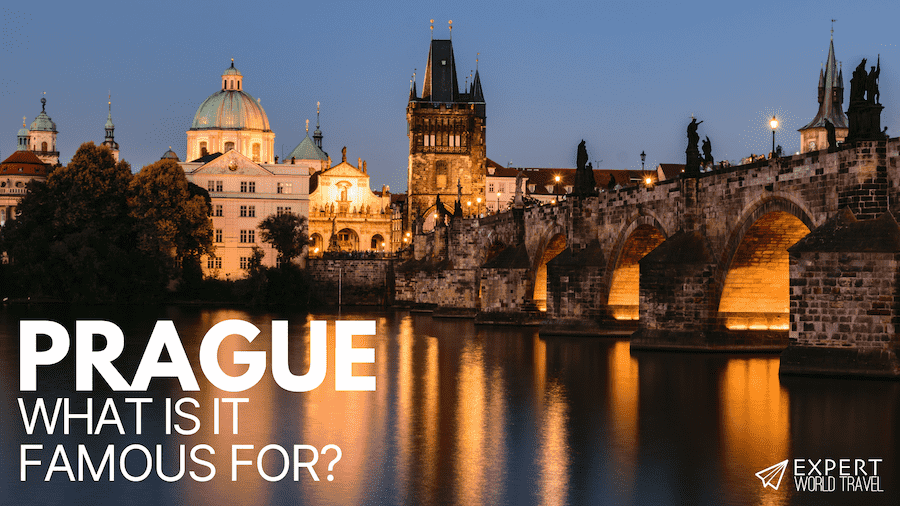 What is Prague Famous For?

Located in the heart of Europe, Prague, the capital city of the Czech Republic is a favorite destination for travelers with a passion for Old Towns and architecture. Along with the diverse architecture and museums, the city is also a popular destination for nightlife and trendy shopping with hen and stag parties often booked on weekends. Added to the mix of tourist attractions are hundreds of green spaces, some dating back to medieval times.  Let the following list of what Prague is famous for convince you to add Prague to your list of must-see European cities.

A visit to Prague is a living architectural textbook with an eclectic mix of old and new that is unparalleled around the world.  Romanesque and Gothic cathedrals are surrounded by fascinating architecture from Art Nouveau to Cubist. Buildings like the Rotunda of St Martin, the Wallenstein Palace, and the Church of Our Lady before Týn reflect centuries of cultural and economic development. New buildings like the National Technical Library in the upbeat community of Dejvice and Frank Gehry’s Dancing Building highlight the city’s modern era. 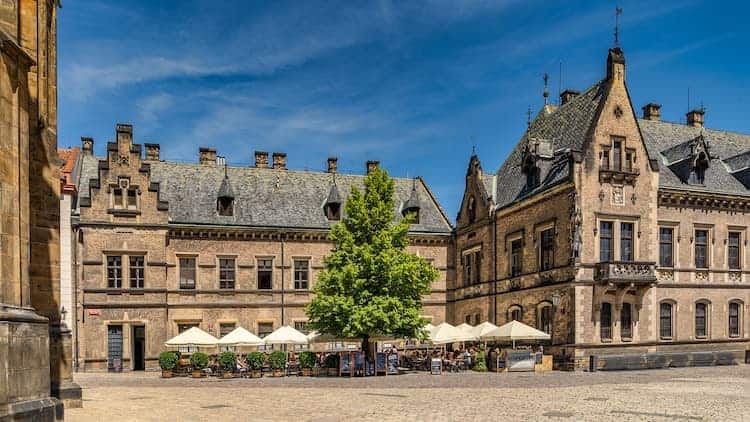 Dating back to the 9th century, Prague Castle served as the residence for Czech royalty and presidents. The entire complex is huge, covering almost 70,000 meters. In fact, it’s listed as the world’s largest ancient castle complex by the  Guinness Book of World Records.  It includes courtyards, gardens, museums, and cathedrals and can take several days to explore. To hit the highlights, be sure to visit the Old Royal Palace, the Great South Tower, St. George’s Basilica, and the Gothic ceilings of… 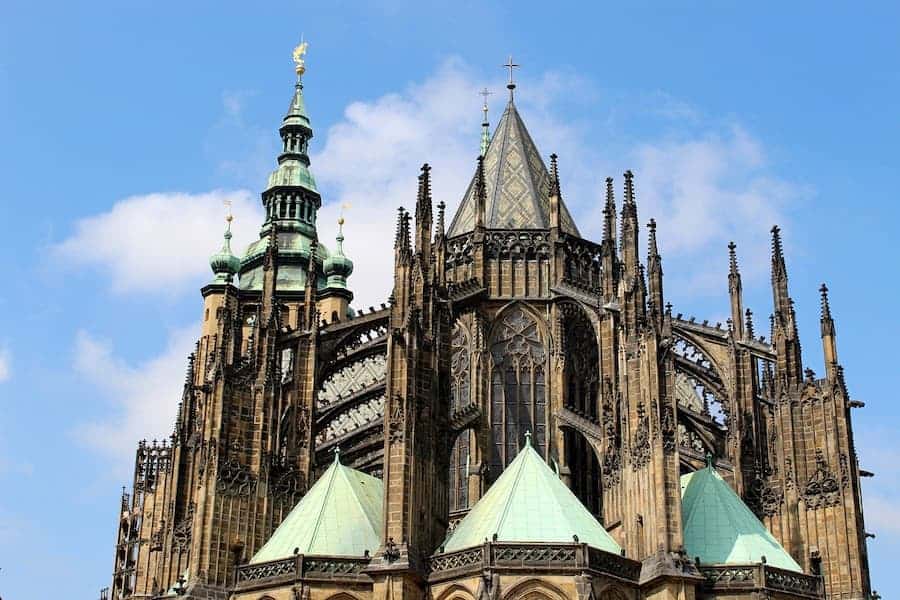 Standing majestically on the Old Town Square, St. Vitus is Prague’s largest and most important cathedral. The entrance to the cathedral lies between the Second and Third Courtyard of Prague Castle. The foundation was laid by Charles I, and It took almost 600 years to build the French Gothic cathedral. It was finally completed in 1929.  Visitors can admire the stained glass windows, ceilings with frescoes, and life-sized sculptors. Semi-precious stones and 16th-century paintings adorn the walls, and a staircase leads to a chamber containing the Bohemian crown jewels. Along with religious services, coronations of Czech kings and queens took place here. 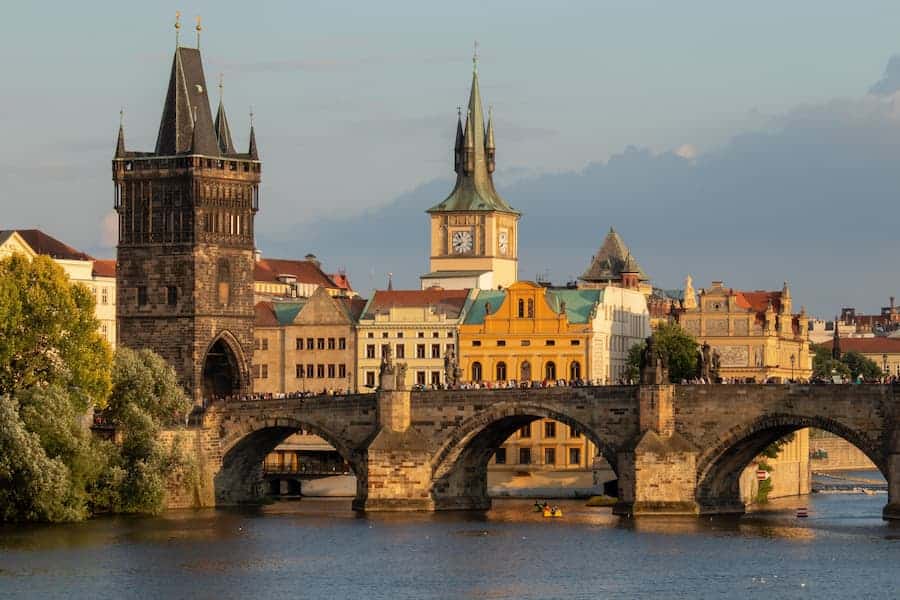 Named in honor of King Charles IV, the Charles Bridge is a picture postcard landmark of the city of Prague. Along with many other bridges, it crosses over the Vltava River and connects the Old Town with the Malá Strana (Little Quarter) and the Staré Město (Old Town). The bridge was completed in 1402 and is one of the most famous bridges in the world. It’s made of Bohemian stone with 30 statues built into its structure. You can climb the defensive Gothic towers at each end for a panoramic view of the city. The atmosphere around the bridge is vibrant with hundreds of tourists, artists, musicians, and street vendors. At New Year’s the bridge provides a magical spot to see the fireworks around the city over the… 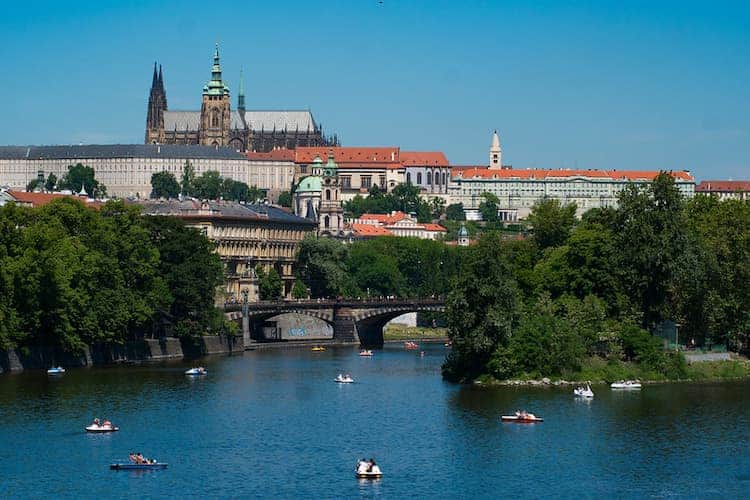 The city of Prague is bisected by the picturesque Vltava River. The waters are spanned by more than 30 bridges and footbridges and is the longest river in the Czech Republic. A river cruise along the Vltava is an excellent way to see the city from a different perspective as you float past red-roofed houses and ornate stone bridges. Most of the cruises begin underneath the Charles Bridge. It’s a good place to take photos of the Old town, New Town, and Prague Castle. Evening cruises are available to experience illuminated views of the Prague Castel and the Charles Bridge reflecting magically on the water.  The river’s embankment is the site of farmer’s markets, flea markets, dances, exhibitions, and sports. In winter, one of the boats is converted into a sauna. 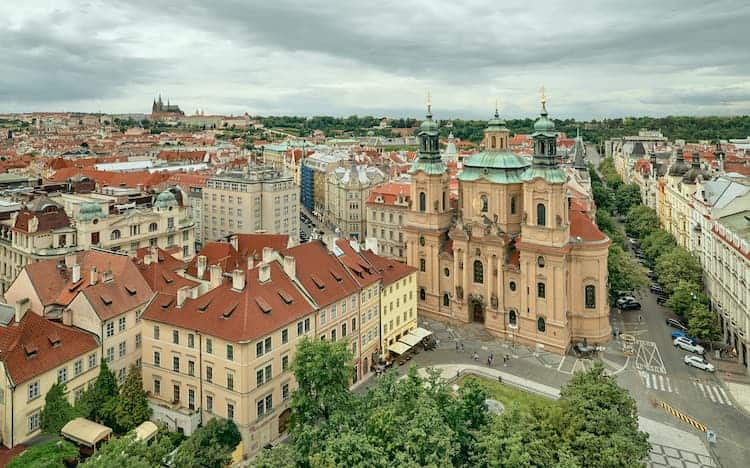 Prague’s Old Town Square is famous as the most picturesque one in Europe. A  leisurely stroll along the winding cobblestone streets amid towering cathedral spires has a distinctively medieval atmosphere. Found between Wenceslas Square and the Charles Bridge, the square used to be a bustling marketplace up until the 20th century. Many tourists begin their tour of Prague at Old Town Square. History buffs and art lovers are always fascinated by the sights. It’s now listed as a UNESCO Heritage Site and a place to visit the Church of Our Lady before Týn, and the… 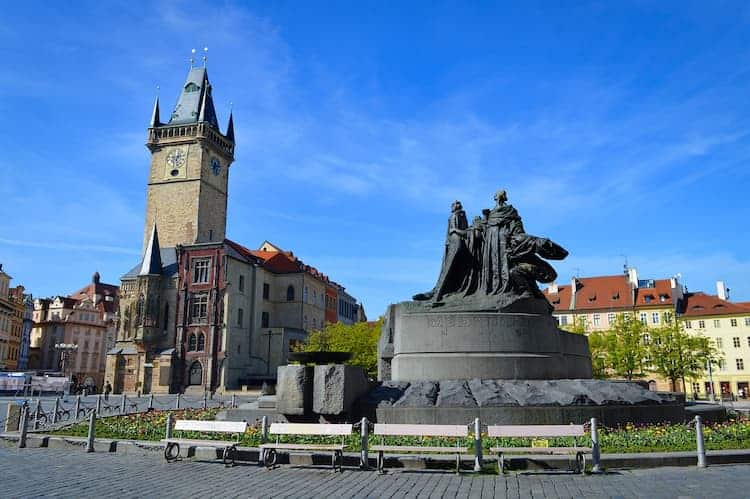 Visitors can get a bird’s eye view of the City of a Hundred Spires from the top of the Old Town Hall Tower. Visitors can choose to walk up the spiral staircase or take the wheel-chair assessable lift.  From the top of the tower, visitors get a view of the city’s many spires, the Prague Castle, St. Nicholas Church, Týn Cathedral, and other notable landmarks. The 70m (230ft) tall Gothic tower dates back to the 14th century,  is a dominant part of Prague’s architectural landscape,  and is the site of the famous… 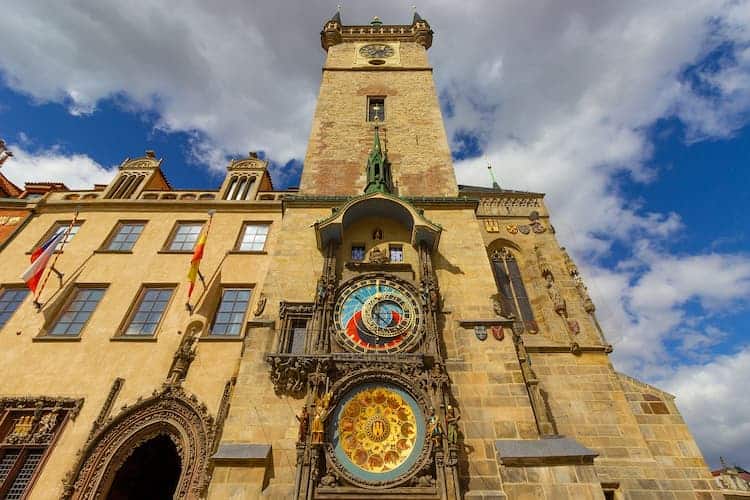 Located on the southern wall of the Old Town Hall, the Prague Astronomical Clock is one of the city’s most iconic attractions. The 600-year-old clock dates back to the 15th century and is the world’s oldest functioning astronomical clock. The dial represents the position of the sun and moon in the sky and a  zodiac ring represents the stars. Each day between 9 am and 11 am tourists flock to the square to witness the “Walk of the Apostles.” At the chime of the hour, you’ll see mechanical figurines of the 12 Apostles marching around in the tower’s window. The ancient clock is located near the Gothic Church of Our Lady before Týn with its twin towers representing Adam and Eve.

Get a glimpse of Prague’s local life at the bustling district of Wenceslas Square, the to-go place for shopping, dining, and partying in the Nové Město (New Town). The square,  a 10-minute walk from the Old Town,  is the former site of a horse market and was once used for mass demonstrations. The boulevard around the square is huge and can accommodate up to 400,000 people. The area buzzes with hotels, shops, restaurants, hip coffee shops, nightclubs, and bars. Visitors won’t find a shortage of things to do at Wenceslas Square. And since open containers of alcohol are legal in Prague, you can grab a beer or cocktail and admire the sunset from a spot on Sunset Hill.

Across the Charles Bridge along the west bank of the Vltava River lies the Malá Strana historic district, also known as the Little Quarter or Lesser Town. But there is nothing “lesser” about this part of town as it showcases Prague’s affluent side. Pastel-colored homes with red roofs and elegant palaces line the cobblestone streets. The Little Quarter is also home to the Wallenstein Palace and St. Nicholas Cathedral, both stunning examples of Baroque architecture. 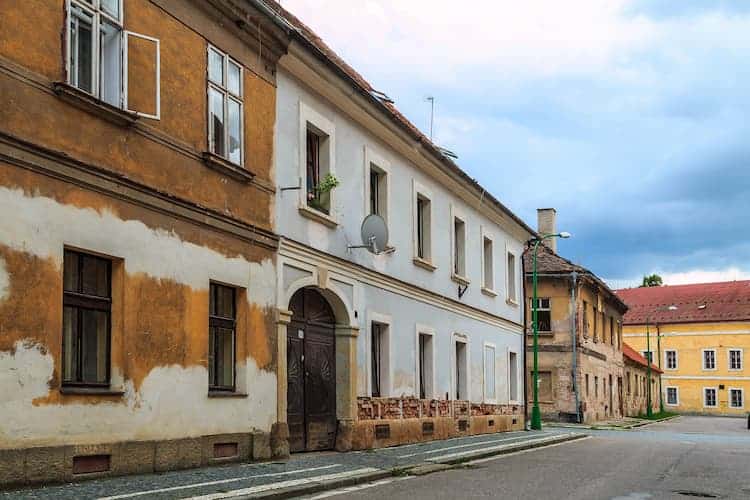 Prague’s Jewish Quarter, called Josefov, is a short walk away from Old Town Square. The Jewish community settled here after banishment from the rest of the city back in the 10th century. The district is home to some of Europe’s best-preserved Jewish monuments. Tourists can meander among the tombstones of the Jewish Cemetary, tour the Jewish Museum, and visit the Pinkas Synagogue, a holocaust memorial paying particular homage to children.

Aside from its impressive architecture, Prague is also famous for its arts and cultural scene. The city has several fascinating museums from art collections to natural history exhibits. The National Museum on Wenceslas Square houses more than 14 million artifacts that include sculptures, jewelry, and more. The Prague National Gallery is Europes second oldest art gallery and features rare masterpieces from Picasso, Van Gogh, Monet, Rodin, and Klimt. 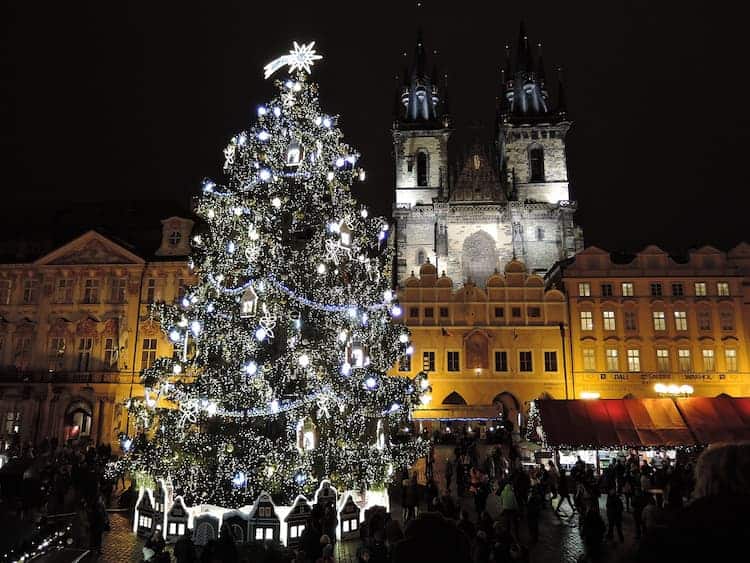 Like most other European cities, Prague is an amazing place to visit during the Christmas season. From November through the end of December, Old Town and Wenceslas Squares come alive with decorated trees and dazzling lights. Market stalls line the streets to sell local crafts, mulled wines, and Czech desserts. Ice skating rinks are open and live music events are scheduled. The magic in the air makes the city one of the best places in the world to experience Christmas markets. 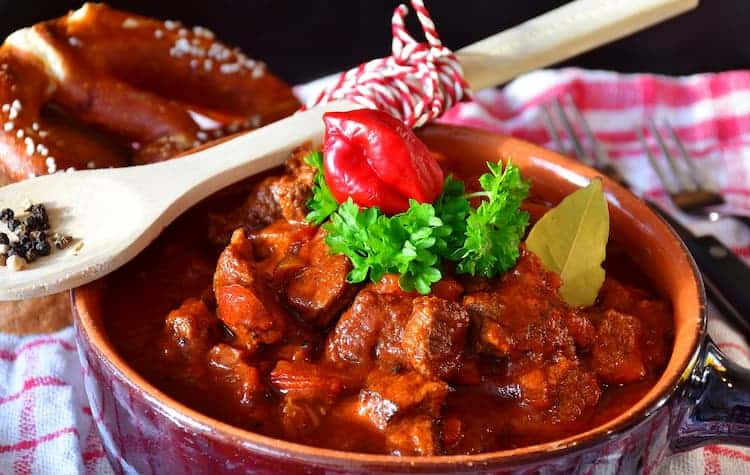 Prague is an excellent city for foodies, especially meat lovers.  Traditional Cheque dishes focus on meats like beef, pork, and chicken. Goulash is a hearty, fragrant stew of meat and vegetables heavily seasoned with paprika. It’s served with knedlíky, which is bread-like dumplings. For the ultimate Cheque specialty, try the juicy pork knuckles served in restaurants. They’re said to be the best in the world, especially when washed down with a refreshing…

Did you know that the Cheque Republic drinks more beer per capita than anywhere else in the world? It’s the birthplace of Pilsner, and Prague produces some of the best beer brands on the planet. Drinking beer is a way of life for the locals, and pub crawls are popular for hen and stag parties held around the city. You can get good, inexpensive beer in classic pubs, beer bars, and on tap from small and medium-sized breweries.

Prague is a famous destination for Europe’s shopaholics. Visitors in Prague shop for everything from unique souvenirs to fashionable clothing.  Pařížská Street is a popular shopping district with designer boutiques that sell the latest fashions and all of the world’s top luxury brands. More affordable brands are sold at the Kotva Department Store in the Náměstí Republiky and the Prague Thrift Store in Vinohrady. Other items to shop for include antiques, china, paintings, and precious stones.

The nightlife scene in Prague is especially vibrant. Party animals dance the night away while the streets are filled with dance music blaring until the sun rises. You’ll find artsy cocktail bars, underground clubs, cozy pubs, and hip music venues all around town. Some of the best places to get into all the action are the local pubs in the Old Town such as the Hemingway Bar and the Anonymous Bar. For dancing, try the Cross Club and Lucerna Music Bar, two of Prague’s best nightlife spots for tourists. 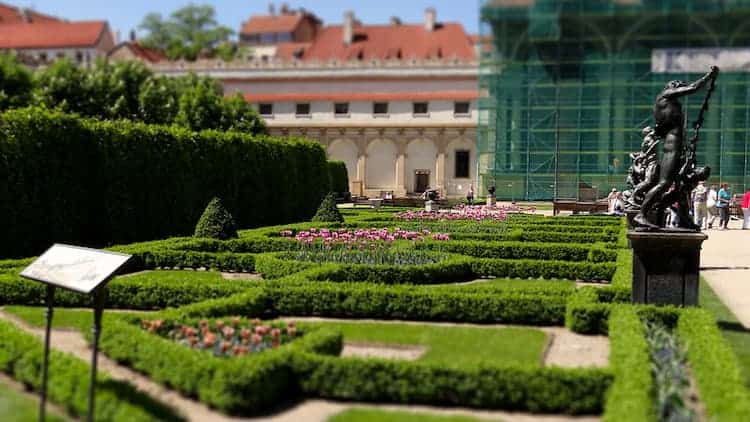 The city of Prague has long realized the importance of green spaces. The many historic parks and gardens are Prague’s greatest treasures, and over two hundred of them are scattered across the city. The oldest were established during the Middle Ages. Monastic gardens were first,  followed by private gardens adjacent to palaces and grand homes during the Renaissance. Each period had its own style and layout reflecting the philosophy of the times. Some of the not-to-be-missed green spaces include the Palace Gardens below Prague Castle, Wallenstein Gardens, and the Petřín Hill gardens.

Prague has long been in love with music and live performances. Dance clubs like the Chapeau Rouge have entertained guests for more than a hundred years. The music in Prague satisfies rock and pop fans, classical music aficionados, and lovers of almost every other genre. The churches of Prague, the Municipal House, and the Rudolfinum are good places to experience classical music. Fans of dance music will be happy at the city’s renowned music clubs. Some must-stopping points include the Akropolis, the Roxy, and the Cross Club.

Rounding out all the things Prague is famous for is its quirky, off-beat attractions. You can visit a nuclear bunker in a decrepit part of town that turns into a club at night. Have hot chocolate so thick it has to be eaten with a spoon at Café Kafíčko. A shoe monument made of hundreds of shoes strung together replaces the statue of Joseph Stalin that was destroyed in 1962. Beatles fans should visit the graffiti-laden Lennon Wall dedicated to John Lennon, a symbol of resistance against Gustáv Husák’s communist regime who had banned, among other things, pop music.